Q&A: This Music Professor Has Played for Adele, CeeLo – and the NFL 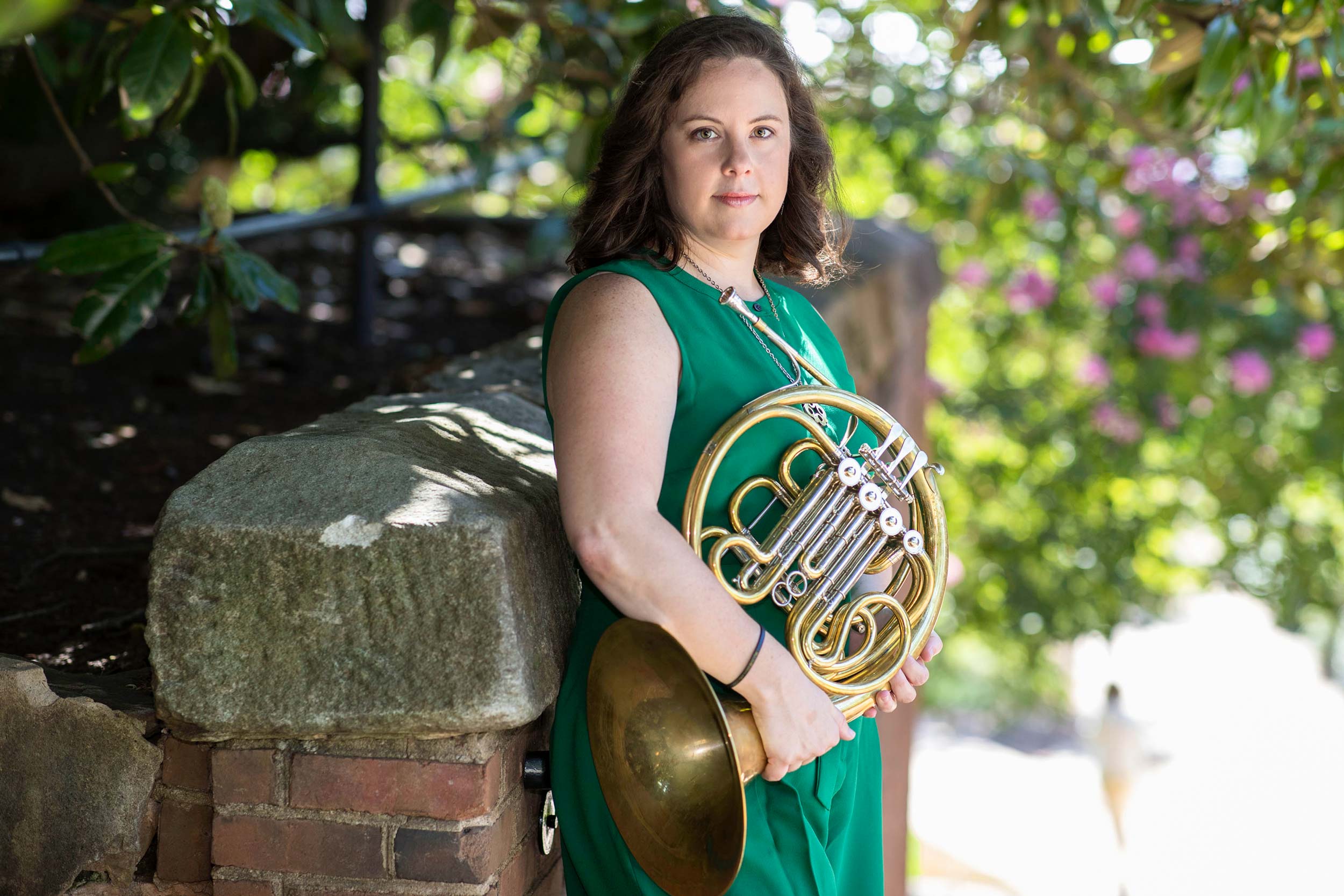 The first night she took the stage with Adele, Katy Ambrose was six months pregnant – with twins.

Ambrose, a longtime French horn player, was thrilled. So, apparently, were her twin sons. Every time the thumping bass of the British singer’s break-up anthem, “Water Under the Bridge,” rang out, Ambrose felt rhythmic kicks in her belly.

“One of my boys kicked me every time that song played,” said a laughing Ambrose, now entering her fifth year as an assistant professor of performance in the University of Virginia’s McIntire Department of Music. “It was just incredible. I kept thinking this must be what it felt like to be on stage with Sinatra or someone. Adele was so captivating, and she was just on fire, from the first moment of rehearsals to the last second of the last song.”

Although the Adele tour was, as Ambrose put it, a “right-place, right-time” situation, her résumé is impressive, full of chamber, orchestral and pop music credits. She is the principal horn player in the Charlottesville Symphony, fourth horn of the Delaware Symphony Orchestra, and has played with numerous symphonies and orchestras all over the country, as well as opera companies and ballets. Later this week, she will join several other UVA music faculty members performing at the Staunton Music Festival, including I-Jen Fan, Nathaniel Lee, Elizabeth Roberts and Pete Spaar.

Her other forays into popular music include playing in the band for CeeLo Green’s Grammy-winning album “The Lady Killers” and working as a recording artist for NFL Studios for five years, recording some of the familiar anthems that are a clarion call to “Monday Night Football” fans.

We caught up with her to learn more about her work and how she is using it to help her students.

Q. You are a performance faculty member at UVA. What does that involve?

A. I give students one-on-one lessons in French horn and I coach horn ensembles, as well as other smaller chamber ensembles.

I was really looking for a place where I could play in the local orchestra and teach at a well-respected university, with students who worked hard and were committed to their studies. I loved the idea of teaching at a “public Ivy” like UVA.

Q. In addition to your numerous classical credits, you have played with artists like CeeLo and Adele. How did that come about?

A. With CeeLo, I got a random call one night, at least 10 years ago, about a month before his album came out. They needed someone to come to a recording studio the next morning. They could not tell me what it was for, just that I would be paid and we would be filling out tracks that had already been recorded. It was kind of strange, but I decided to go and, after we finished recording, one of the engineers told me it was for CeeLo’s album. The album came out soon after and it was a huge hit.

Adele was a bit more planned, though it was still a right-place, right-time situation. I was eating lunch with a friend after performing at a music festival when someone texted him to see if he knew any brass players in Philadelphia, where I lived at the time. They were looking for players for Adele’s tour. I said yes, of course, and it was just incredible. I have never met someone so gracious and professional.

Q. You were also a recording artist for NFL Studios for five years. What did that entail?

A. When I was living in Philadelphia, and for my first year in Charlottesville, I was one of the horn players for the NFL. In any given year, the NFL has between five and eight French horn players, as well as trombonists and trumpeters. We record this really loud, exciting music that gets mixed into a big orchestral piece played through the Super Bowl, on “Monday Night Football” and other broadcasts.

The first time I played with the NFL was also the first month I played for the Philadelphia Orchestra. When I went to Thanksgiving that fall, my family was supportive when I told them about the orchestra, but their jaws dropped when I mentioned the NFL. It was so funny to see.

Q. Looking back, what other performances stand out to you as particularly memorable?

A. Sept. 11 happened at the beginning of my senior year of college. The School of Music at the University of Michigan organized a concert in just two days, for anyone at the university to get together and play. I don’t think I will ever forget that. It was really healing, even though it was impossible to process the tragedy of it all, to have some sort of avenue to express something and be around other people who were grasping for how to process this terrible thing.

Q. What do you hope your students remember about working with you, regardless of if they decide to play professionally or pursue another career?

A. It is so easy to not notice music now, because it is everywhere. We are completely inundated with media, surrounded by sound all the time. So, I hope my students will find ways to appreciate what is artistic about any kind of sound, learn how to create sound and create music out of that sound. I also hope they realize that you do not have to be a world-class artist to be a musician.

A. Students coming back should definitely check out BrassFest in Old Cabell Hall on Sept. 7. We have a tuba quartet coming to play the [Beatles’] entire Sgt. Pepper album, and you can head over to Arts Grounds Day afterward to learn all about the arts at UVA.

A Year We Will Never Forget: 2019-20 in Review END_OF_DOCUMENT_TOKEN_TO_BE_REPLACED

‘What Will You Carry With You?’ Remarks From UVA President Jim Ryan END_OF_DOCUMENT_TOKEN_TO_BE_REPLACED