Q&A: Sarah Ross Found a Career – and Had a Blast – As a Film Festival Intern 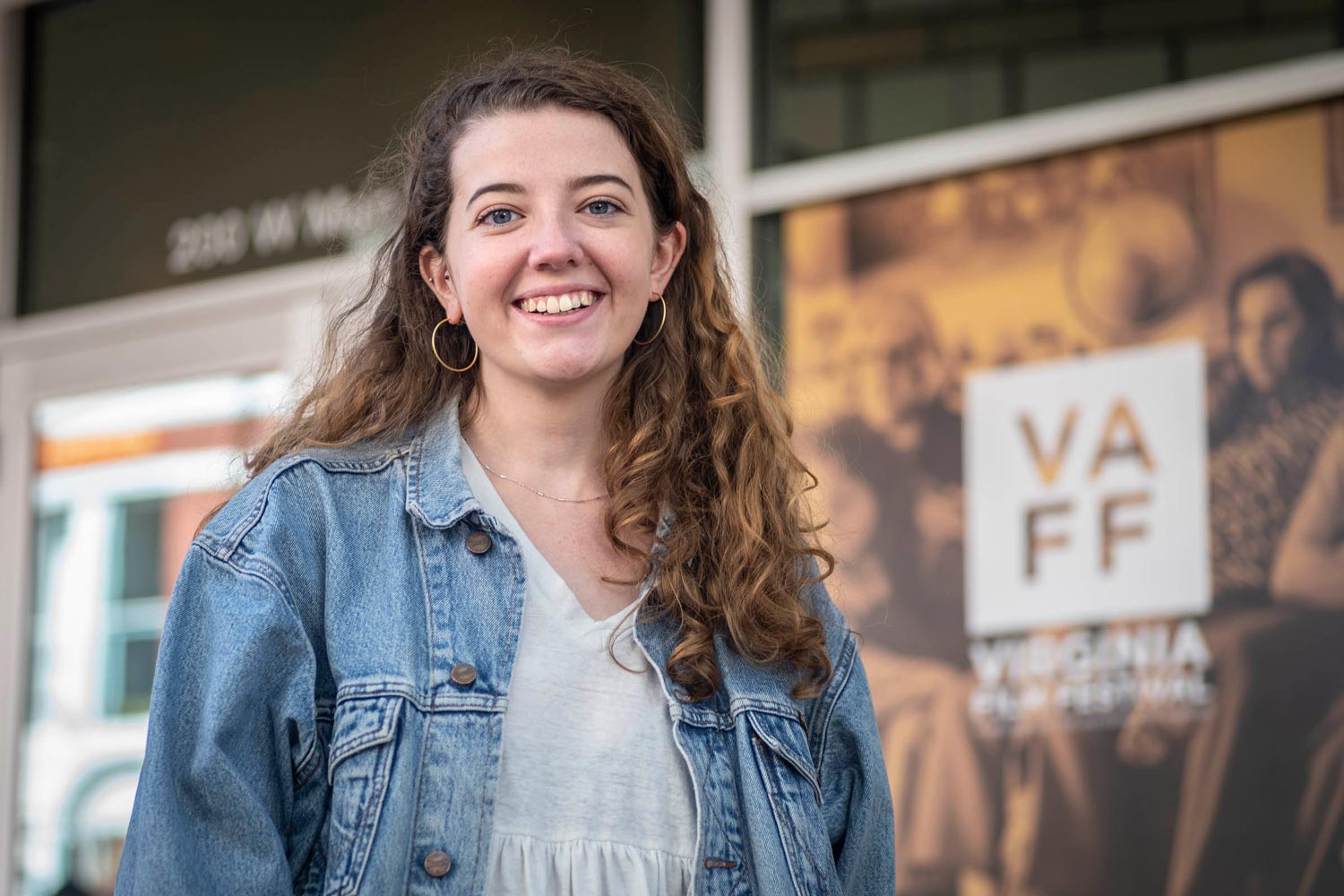 Reaching the end of her first year at the University of Virginia, Sarah Ross was considering majoring in media studies and starting a career in the film industry.

She knew she enjoyed films, but she wanted to know more about the different career options out there and how to pursue them. A fourth-year student, her sister’s roommate at the time, suggested Ross intern with the Virginia Film Festival to find out.

“I applied, and the rest is history,” she said. Ross, now a fourth-year student double-majoring in media studies and sociology, has interned with the festival for three years in a row.

The annual festival – this year’s edition begins Thursday night and runs through Sunday – brings hundreds of actors and filmmakers to Charlottesville and UVA for a long, full weekend of events and screenings, this year including more than 150 films. It is a program of UVA, its Office of the Executive Vice President and Provost, and the vice provost for the arts.

Thanks to its close partnership with UVA, the festival has a robust student internship program. This semester, eight UVA student interns have devoted at least 10 hours a week to everything from fundraising to production to youth education programs. The interns are paid, and also benefit from opportunities to gain hands-on experience and meet both established figures and rising stars in the film industry.

According to Ross, it is an excellent proving ground for anyone interested in film.

“Every year, I have walked away with a new level of skill and a great feeling of reward,” she said. “You learn so much and you really feel like a valued part of the team that is making this amazing four-day festival happen. … It’s been one of the best things I have done at UVA.”

We spoke with Ross before the festival got underway to learn more about her experience as an intern, her favorite parts of the festival and some of the films she is most looking forward to this year. (Learn more about this weekend’s events and find tickets, including free tickets for UVA students, at virginiafilmfestival.org.)

Q. As an intern, what are some of your primary responsibilities?

A. Interns work on several different projects each year. For the past two years, I focused on our outreach programs at UVA and coordinated the Adrenaline Film Project, a short-film competition held during the festival until it was retired last year.

This year, I helped with the new Festival Scholars Program, a six-day educational experience for UVA students that goes along with the festival. I have also been taking on publicity and marketing roles, promoting our films to UVA and Charlottesville groups. We go through every film and reach out to groups that might be interested in it, and develop email campaigns, flyers and other promotional materials.

We’re in crunch time now, so I am coordinating times and venues for the Festival Scholars program and generally finalizing all of the logistics. I love the fast pace that comes with this time of year, and it’s really fun to see it all come together.

Q. What have you enjoyed most during your three years interning with the festival?

A.  I love the level of independence, ownership and responsibility interns are given. I have had other internship experiences that just felt like busy work, but with the festival, I truly walk away feeling that I had ownership of the projects I worked on and that I made a difference. It’s such a great feeling, and you learn so much.

You also get to be part of a great team of people and learn about everything it takes to put on a festival of this size. I can sit down with the development team or the production team to learn about what they are working on. I have met so many friends and formed great relationships. I am so sad this is my last year; I can’t imagine this time of year without the festival.

Q. Have you gotten to meet many people in the film industry?

A. Definitely. The internship really gives students access to all of the industry people that come in town. There are networking brunches, galas and wrap parties where you can talk with festival board members and high-profile industry guests, and the festival staff does a great job of preparing us for those. We go over bios for all of the guests, talk about networking tools and generally try to go in as well-prepared as possible.

The interns also work the check-in desk, and I particularly love meeting the first-time filmmakers there. They have this amazing sense of wonder and pride, and seeing them get their badge, knowing their hard work is paying off, is really cool.

Q. How has the internship prepared you to pursue a career in the film world?

A. After graduation, I would love to work in film marketing, perhaps working for a distributor and marketing films to festivals like this one. I have really come to enjoy film criticism and talking with people about films that I love, expressing what is great about them.

Being a media studies major, I have learned more about film theory and history, and gotten the skill set I need to talk about films in that context. And, being involved in the festival, I constantly get asked what films I am excited about and why, and I have learned about all of the behind-the-scenes stuff that goes on at a big festival. So I feel really prepared to go after some of those jobs.

Q. Speaking of films you are excited about, can you leave us with one or two suggestions for the weekend?

A. Absolutely. One film I am particularly excited about this year is “3 Faces,” an Iranian film directed by Jafar Panahi. He was banned from filmmaking in Iran, because the films he was working on were deemed unfit by the government. The way he goes about filmmaking after that is really interesting, basically focusing on narrative documentaries almost as a way to disguise his films. “3 Faces” is his newest film in that style, following three actresses in Iran at different stages in their lives. [“3 Faces” plays Saturday at 4:30 p.m. at the Violet Crown cinema.]

I am also really interested in “Border,” a funky Swedish film about a border patrol agent in Sweden who uses her sense of smell to sniff out contraband. She is ostracized from her social group because of her physical appearance, at least until she meets someone crossing the border who physically resembles her. What follows is a coming-of-age story with a twist ending that has been really teased in the promotions. I really want to see what that twist is. [“Border” plays Sunday at 8 p.m. in Newcomb Hall Theater.]

A Year We Will Never Forget: 2019-20 in Review END_OF_DOCUMENT_TOKEN_TO_BE_REPLACED

‘What Will You Carry With You?’ Remarks From UVA President Jim Ryan END_OF_DOCUMENT_TOKEN_TO_BE_REPLACED