Q&A: Tearing Down Barriers the Key for the First Blind Climber of Mount Everest 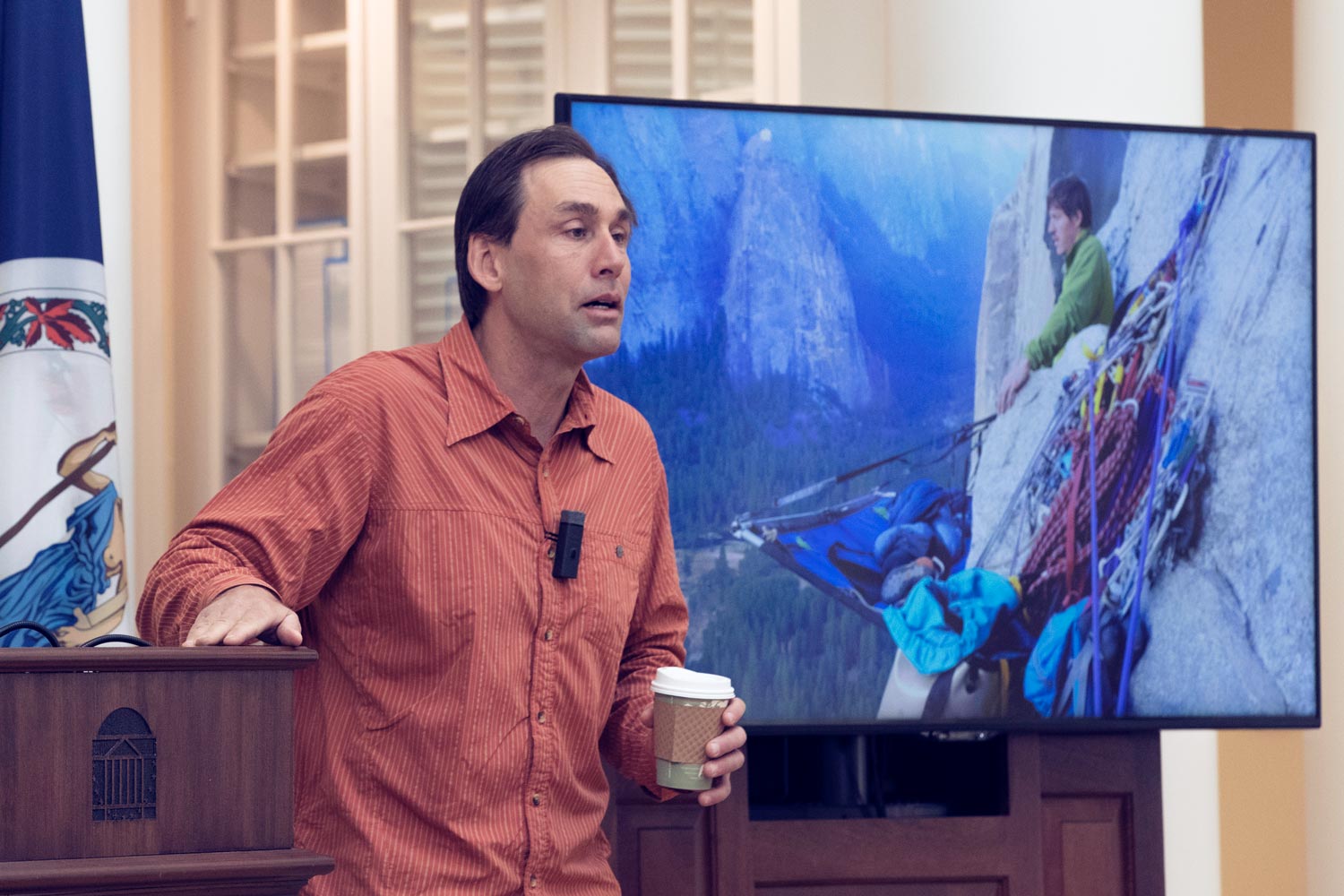 One of the last things Erik Weihenmayer watched on television before a rare eye disease caused him to go blind was coverage of one-legged athlete and cancer research activist Terry Fox running thousands of miles across Canada.

“I thought to myself that there was something inside of him that was like an internal light that seemed to burn and feed on frustration and setbacks,” Weihenmayer said. “It was crazy, because the bigger the challenge, the brighter that light seemed to burn.”

After losing his sight a few months later, Weihenmayer – then just a teenager – signed up for a rock climbing class for the blind.

“I was tired of building walls around myself, protecting myself,” Weihenmayer said. “I wanted to tear down those walls and open my heart. I wanted to attack like Terry.”

Weihenmayer is doing that – and then some.

On Thursday, Weihenmayer – the first blind person to climb Mount Everest and the Seven Summits – gave an inspiring talk in the Dome Rome of the University of Virginia’s Rotunda.

Q. Knowing when you were a child that you were going to lose your sight by the time you were a teenager must have been extraordinarily difficult. How were you able to get through that?

A. I don’t really know. I mean, one is I had a great family. So in a certain way, I was incredibly lucky to have a good, positive family. But like any family, we had family problems and my mom died in a car accident when I was 16. I had struggles that I had to sort of work through.

Essentially, the lesson for me was I know how tenuous that journey is, how easy it is to get shoved to the sidelines and sort of not living anymore, just kind of surviving. I know how fragile that process is.

Q. How much training and preparation was required before you climbed Mount Everest, and how did you compensate for not having vision?

And I’ve never had a problem with finding great people to help me out and learn. I’ve always had great teachers – great friends who taught me how to climb. There’s been no shortage of that. You know, I always get a little curious when people say, “Nobody will help me.”  I’m always surprised by that because if you put your heart out there and are not defensive and put yourself in the right situations, people come into your life and are there for you.

Q. When it came time to actually do the climb, were you scared?

A. I couldn’t hold a hot cup of tea at 3 in the morning in the tent (smiling). I was trying to drink it, but my hand was shaking so bad I couldn’t get it to my mouth. Just nerves.

Q. Can you explain what your organization, No Barriers, is all about?

A. It’s a movement that we’re building that brings people together. It’s some people with physical challenges, but honestly, it’s more people with what we call “invisible barriers” – people who have “normal,” everyday barriers.

Maybe it’s their first time going to college. Or maybe they struggle with poverty or anxiety or self-doubt, self-confidence. A lot of people have had trauma. In that way, we’re all kind of in this No Barriers club.

The idea is to come together, to lean in and try and figure out how we break through. All together. What do we have in common and how do we break through this stuff? Be proactive.

I think it’s a positive message because right now, so much of our productive awareness is consumed by external trauma in the world – Twitter feeds and just chaos and fear. There’s so much fear in the world. I think a lot of our brains are getting taken up by all of this reactionary behavior.

I think we have to get back to “No Barriers” if we’re going to keep growing and being the best versions of ourselves – as individuals, but also as a community. It’s asking the right questions and focusing on the right things, and not just reacting to fear and all the stimuli.

Q. Among many adventures, you’ve kayaked across the Grand Canyon and were on a team that raced across the deserts and mountains of Morocco. What’s next on your to-do list?

A. I failed 20 years ago on Ama Dablam, which is a peak in the Himalayas. I’d like to try it next year. But I went to the doctor and he said my hip was all bone on bone, all worn out. So I’m sort of struggling. … There are always barriers.

The crazy, ironic part is that blindness isn’t the barrier for me right now. I know how to deal with that. It’s my hip – what do I do? Do I go up there with this bone-on-bone thing? I’m going to do stem cells and try everything I can. But I’m 49, so for me the challenge is a body that’s just starting to get worn out a little bit. I don’t mind a rickety hip, but it can’t give out on me at 22,000 feet.

Q. What’s one thing people don’t know about you?

My message has never been, “go climb Mount Everest.” It’s to take some of the barriers that you face and have the courage to try and break through some of that stuff. Life is a very personal journey. It’s not about Mount Everest.

A Year We Will Never Forget: 2019-20 in Review END_OF_DOCUMENT_TOKEN_TO_BE_REPLACED

‘What Will You Carry With You?’ Remarks From UVA President Jim Ryan END_OF_DOCUMENT_TOKEN_TO_BE_REPLACED