Q&A: Weeks After Walking the Lawn, Alum Leaps Onto the Professional Stage 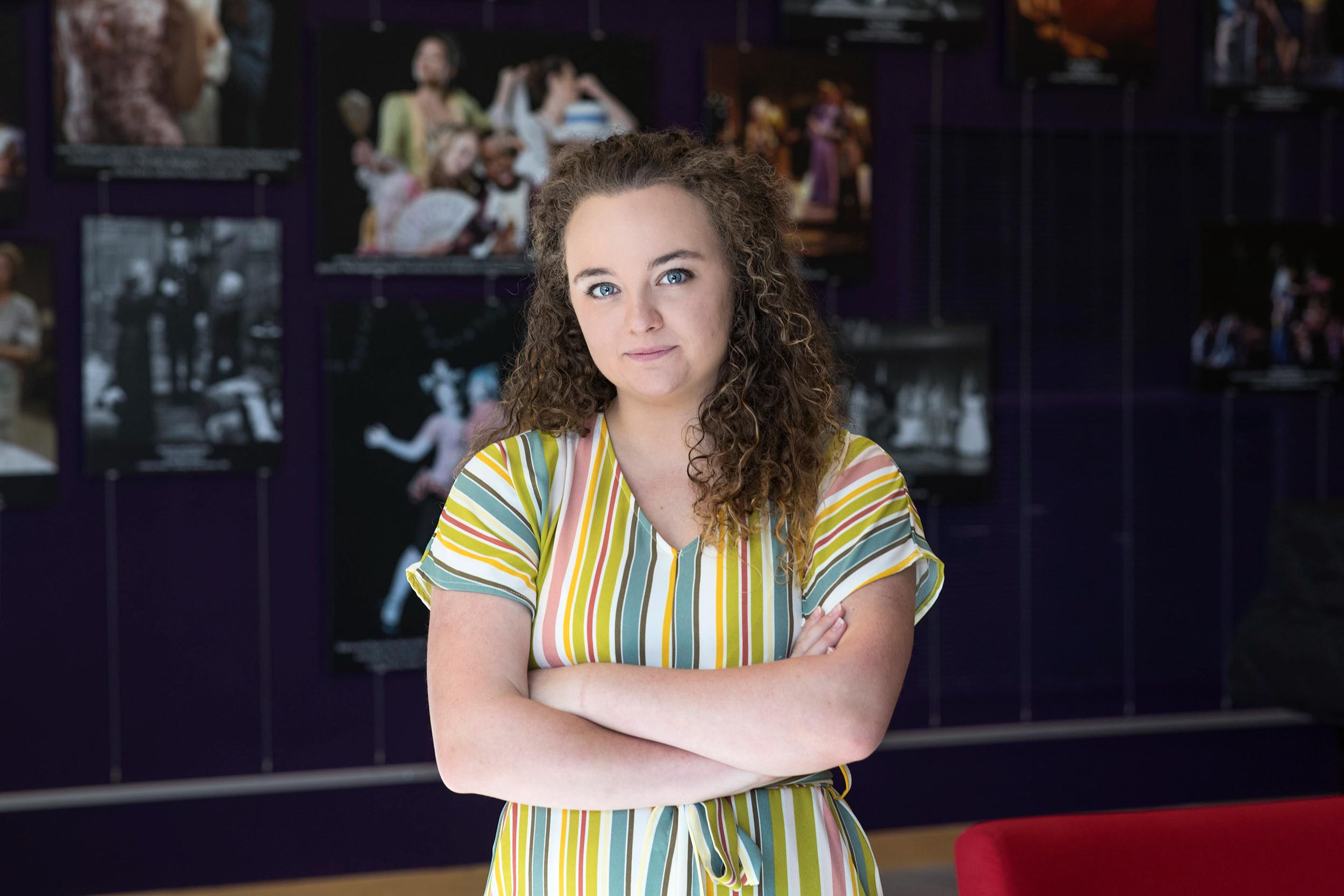 Ryleigh Tatum, a May graduate of the University of Virginia’s Department of Drama, will make her professional stage debut in July as not just one, but two characters in Heritage Theatre Festival’s production of “Pride and Prejudice.”

The annual summer festival is produced in collaboration with the University and provides many UVA students with the opportunity to work alongside graduate students and professional actors. “Pride and “Prejudice” debuts July 11; “Million Dollar Quartet” opened Thursday; and two other plays, “Steel Magnolias” and “The Niceties,” are scheduled for later in the summer. (Ticket information here.)

Double casting is not the only quirky change playwright Kate Hamill made to her stage adaptation of Jane Austen’s classic novel. The show is packed full of feminist twists and farce that Tatum and her castmates hope will make audiences laugh out loud.

We sat down with the recent grad to discuss the play and the opportunity to make art on a new level in her community.

Q. What kind of theater were you involved with at UVA?

A. I mostly did performance. I changed my major right before my fourth year and finished the major within a year.

Before that, I’d done some student theater, directed a show and was in a few shows. I came into college thinking I was going to take a break from theater, because I’ve done it forever, [but] here we are.

I mostly worked with Spectrum Theater, which is a smaller [student-run] group, and that’s who I directed for a couple years ago. I was also a part of the Autism Theater Project at UVA, [now called the] Accessible Theater Project. We would go into community theaters and partner with them to put on sensory-friendly shows.

Q. The novel “Pride and Prejudice” was published in 1813, but Heritage’s production is a 21st-century adaptation by Kate Hamill. How are the two different?

A. I have never read the actual book “Pride and Prejudice.” and I haven’t watched any of the [HBO or BBC productions] But, obviously, it’s a very classic, traditional story about gender roles, marriage and love.

This version is kind of a farce and it’s fantastic. It uses the same plot lines, but there’s sex jokes and all the characters are doubled. It’s telling the story of Lizzy and Darcy in the classical sense, where they meet and they hate each other and then they fall in love. But I think it really highlights the pressures put on women because even though it is an old, old story from the 1800s – and we’re all going to be in crazy wigs and dresses and using old British dialect – it feels so modern, like it’s happening now.

It’s about family dynamics and the pressures on women and there is some love in it, I guess. But, it’s not about needing it and not about needing to get married or meet expectations. It’s more about how you handle the expectations that are put on you and how you can defy them or mold to them.

Q. You’re playing both Lydia and Lady Catherine. What is it like to switch between the two during the show?

A. I’m definitely more comfortable with Lydia, because that’s the character I’m used to playing with my baby face and being young, energetic and bananas. It’s such a challenge trying to adjust between being a 14-year-old girl who’s super high-energy and positive, and then switching within a page and a half to Lady Catherine, who is older and slower and very, very proper.

I’ve done a lot of work getting into that dialect in two very different ways and creating different voices and physicalities for these characters, because they are just so different and we don’t have time to do full makeup shifts.

It’s been really neat because I feel like when you are playing two characters that contrast so much, you pick up on more idiosyncrasies in each of them. Like, “Oh, I can move my hand like this as this person, but not as this person.” Which isn’t something that I necessarily would have noticed.

Q. What most excites you about this work?

A. I was so nervous going into it because I’m the youngest in the cast by a lot and I was so nervous that I was not going to have anything to contribute – especially because everyone else has M.F.A.s or is [an] Equity [actor] and I just got my B.A. But it really feels devised and it really feels like everyone’s contributing something and I do feel like I have space to be creative, make fun choices and try new things.

It’s moving very quickly. Three weeks of rehearsal is really very short. But, it’s exciting because the energy in the room is always so good.

Q. How do you go about developing characters and preparing for a role, especially with this mixture of time periods?

Kate Hamill did a great job of breaking down the characters and not being super-explicit in that they have to be exactly like this, but giving us little quirks.

Q. What are some of those quirks?

A. With Lydia, she has the habit of eavesdropping and imitating others’ behavior, so that’s been something I’ve been trying to explore. We’ve done a lot of movement work and period work, in terms of how you would move and behave and the etiquette for the period, but both of my characters break those rules.

Lady Catherine has an older mindset and is attached to things that would have been a few decades before, whereas Lydia has no boundaries. It’s interesting learning the rules and then breaking them, and that’s been really helpful in figuring out the mindsets of each of my characters.

A. I just love the energy in the room when you’re doing a live performance. I hate doing film; it drives me crazy because the energy transfer’s not there. I love being in rehearsals and the energy between actors, but I’m so amped to be on stage – not for the glory, but [for] the energy that you get to expend and get back.

It’s always, “Go 100% in rehearsal and 110% in performance,” but I can never get to 100% because you don’t have the energy transfer until the doors open and you have people in the audience.

For All of Us END_OF_DOCUMENT_TOKEN_TO_BE_REPLACED