A Quantum Challenge: UVA Quartet at the Center of Efforts to Gain U.S. Edge 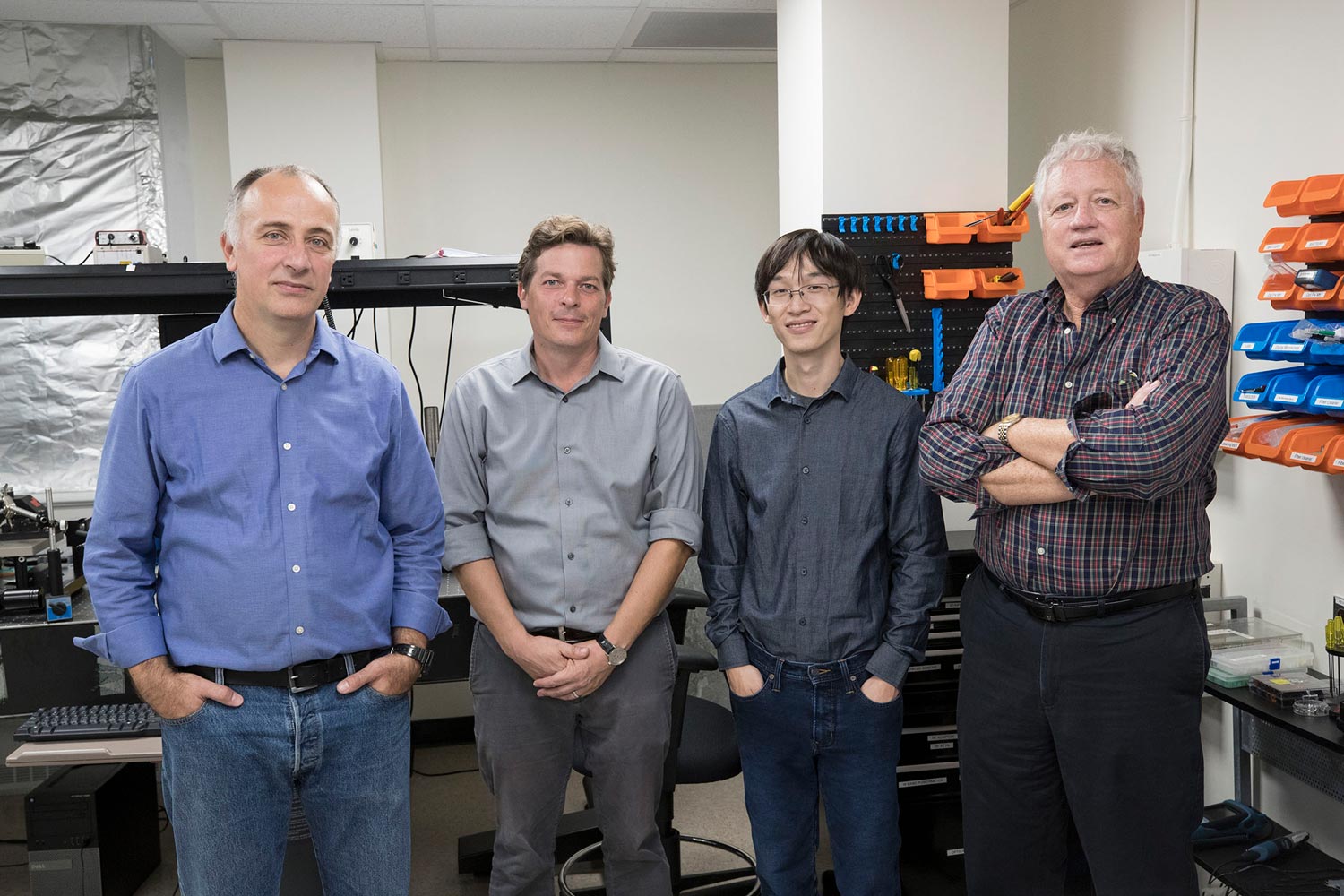 A University of Virginia physics professor and three UVA engineering professors are members of three new multi-disciplinary, multi-university teams that are seeking new understanding of quantum science for the development of practical, extremely high-tech tools – including the long-dreamed-of and sought-after quantum computer.

The projects are part of a $31 million National Science Foundation push to fund and inspire transformational quantum research to enable the United States to take a lead in the developing and highly competitive revolution in science and technology involving quantum sensing, communication, simulation and computing.

Quantum computers and other devices, once developed and refined, will make even today’s supercomputers seem antiquated for specific applications, allowing for massive-scale simulations to advance predictive science in fields from chemistry (such as for creating more efficient and environmentally friendly fertilizers) to drug discovery, climate science, cryptography and better communications.

Physics professor Olivier Pfister is the principal investigator for one of the teams, with a mission to develop integrated “quantum photonics” on a computer chip, allowing light beams in mini-circuits to be used for quantum computing. The team includes electrical and computer engineering professors Joe Campbell, Andreas Beling, and Xu Yi. They are operating on a $750,000 NSF grant.

Pfister, Campbell and Beling also serve on teams conducting different but related work headed by principal investigators at the University of Texas at Austin. Campbell additionally is on a team headed at the University of Colorado. All of the projects, which represent pieces of a massive puzzle, ultimately will be integrated for the creation of quantum devices.

In all, the three teams on which the four UVA researchers are serving are operating on nearly $3 million in new grants – allowing UVA to leverage its expertise in quantum optical physics and photonics engineering.

“Quantum science is advancing at a tremendous rate due to recent advances in technologies that make quantum computing a real possibility – but it will require a quantum leap, so to speak,” Pfister said. “At UVA, we’ve got significant interdisciplinary strengths, both theoretical and applied, that make us very competitive for leading discoveries in this area.”

In addition to contributing to quantum science and engineering, the grants include training opportunities for UVA graduate and undergraduate students and postdoctoral fellows.

“This is a great opportunity for students from different fields of science and engineering to learn together,” Pfister said.

Pfister’s UVA-led team will focus on the use of “qubits” – units of quantum information – and moving them on optical waves that would operate on as yet un-developed photonic chips at speeds impossible on today’s fast, but not nearly so fast, wired computer chips.

Many of today’s technologies rely on the interaction of matter and energy at extremely small scales. Quantum mechanics studies nature at scales at least a million times smaller than the width of a human hair, which allow researchers to observe, manipulate and control the behavior of particles. Next-generation technologies for communication, computing and sensing will exploit interactions among particles in quantum systems, offering the promise of dramatic increases in accuracy and efficiency.

NSF is funding 33 projects in its new Research Advanced by Interdisciplinary Science and Engineering program, otherwise known as RAISE. The agency is collaborating with the National Institute of Standards and Technology, the Department of Energy and the White House Office of Science and Technology Policy to advance quantum information science.

According to Pfister, the U.S. government considers quantum science and engineering to be among the top 10 areas of science and technology essential to the nation’s future economic competitiveness and national security.

“An international race is ongoing in the area of quantum information systems, notably, with very large investments made by China, that threatens our leadership in this field,” according to Melur K. “Ram” Ramasubramanian, UVA’s vice president for research. “In response, to secure our leadership in quantum computing, the U.S. Congress passed the National Quantum Initiatives Act in September 2018 to accelerate quantum research and development for the economic and national security of the United States and has proposed a multi-agency coordinated funding at a level of $1 billion over 10 years.

“Only a handful of institutions and businesses have the capacity, infrastructure and credibility to pursue this topic. UVA’s three recent awards for projects on quantum information systems is a testimony to the world-renowned expertise of our distinguished faculty in this space,” he said. “It puts us on the map as a serious contender for additional grants from NSF and other agencies to truly advance the state of understanding of quantum mechanics and quantum computing to fulfill this critical mission for our nation.”

“The quantum revolution is about expanding the definition of what’s possible for the technology of tomorrow,” NSF director France Cordova said. “NSF-supported researchers are working to deepen our understanding of quantum mechanics and apply that knowledge to create world-changing applications. These new investments will position the U.S. to be a global leader in quantum research and development and help train the next generation of quantum researchers.”

When Less Is More: How Harnessing the Power of Subtraction Can Add to Life END_OF_DOCUMENT_TOKEN_TO_BE_REPLACED