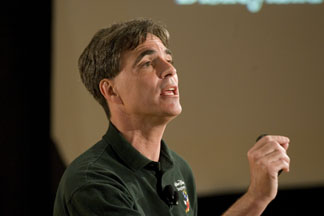 July 25, 2008 — Randy Pausch, the former computer science professor at the University of Virginia who became internationally renowned for his memorable "last lecture" at Carnegie Mellon University last September, died today of complications from pancreatic cancer at his home in Chesapeake, Va. He was 47.

Pausch was diagnosed with cancer in 2006 and, in August 2007, doctors told him that he had "three to six months of good health left."

Pausch, who left U.Va. in 1997 to join the faculty at Carnegie Mellon, delivered his now famous lecture, "Really Achieving Your Childhood Dreams," as part of the "last lecture" series at Carnegie Mellon in which faculty typically give a hypothetical final talk. Once the lecture was posted to Carnegie Mellon's Web site, it became a worldwide sensation. After being reported in national media from The Wall Street Journal to the Chronicle of Higher Education, the online video became so popular that servers at Carnegie Mellon were unable to sustain the volume of traffic from around the world.

Still available on YouTube or at Carnegie Mellon, the lecture has been viewed more than 10 million people.

The 70-minute talk has been translated into seven languages, and Pausch ultimately turned the lecture into a book, "The Last Lecture" with co-author Jeffrey Zaslow of the Wall Street Journal.

In November 2007, Pausch returned to U.Va. where he presented a lecture on time management, telling the audience that time is the only commodity that matters.

In the months since that lecture, he was the subject of an ABC-TV special and has testified before Congress on behalf of the Pancreatic Cancer Action Network.

A post to Pausch's Web site yesterday by a friend said that a biopsy had revealed that the cancer had progressed further than had been thought from recent PETscans. "Since last week, Randy has also taken a step down and is much sicker than he had been. He's now enrolled in Hospice. He's no longer able to post here so I'm a friend posting on his behalf because we know that many folks are watching this space for updates."

James Aylor, dean of the School of Engineering and Applied Science, was Pausch's colleague on the faculty.

"Randy was a brilliant man and a true humanitarian — a man whose integrity, intelligence and attitude about his illness and his values about what is truly important in life moved millions," Aylor said. "He leaves behind a legacy that will last for a long time. He will be missed."

Gabe Robins, professor of computer science at U.Va., has described Pausch as the perfect mentor — a combination of Yoda, Captain James T. Kirk and Jim Carrey.

"Randy was such an inspiration to me as a young faculty member and he became a good friend over the years," said Robins. "The media portrayed this man exactly as he was — bright, honest and sincere. I feel lucky to count him among my friends and mentors.  It is very rare to find a person that combines greatness, grace, and courage the way Randy does. I'm so glad that, through his lecture videos and recent book, the rest of the world got to know him too. Randy's legacy will continue to inspire people for a long, long time to come."

In an interview with Virginia magazine, Robins said that Pausch always had a photograph of Jackie Robinson, who broke baseball's color barrier, in his office as a reminder of a "philosophy of don't whine, work harder, become the best in the world at what you do and success will follow — Randy embodies that, even now," Robins said. "Instead of crawling off into a corner somewhere or getting depressed, he's leveraged his situation into the ultimate teaching tool."

Robins has an extensive Web site with information about Pausch, his lecture, and his illness.

Pausch gave the commencement address at Carnegie Mellon in May and told the graduates there how a friend had told him that he was "beating the [Grim] Reaper" because it's now been nine months since his doctor told him he would die in six.

Pausch was a co-founder of Carnegie Mellon's Entertainment Technology Center and the creator of Alice, an interactive computing program that is used by students worldwide.

Born in 1960, Pausch received his bachelor's degree in computer science from Brown University and his Ph.D. from Carnegie Mellon.

He and his wife, Jai, had three children, Dylan, Logan and Chloe.

For All of Us END_OF_DOCUMENT_TOKEN_TO_BE_REPLACED