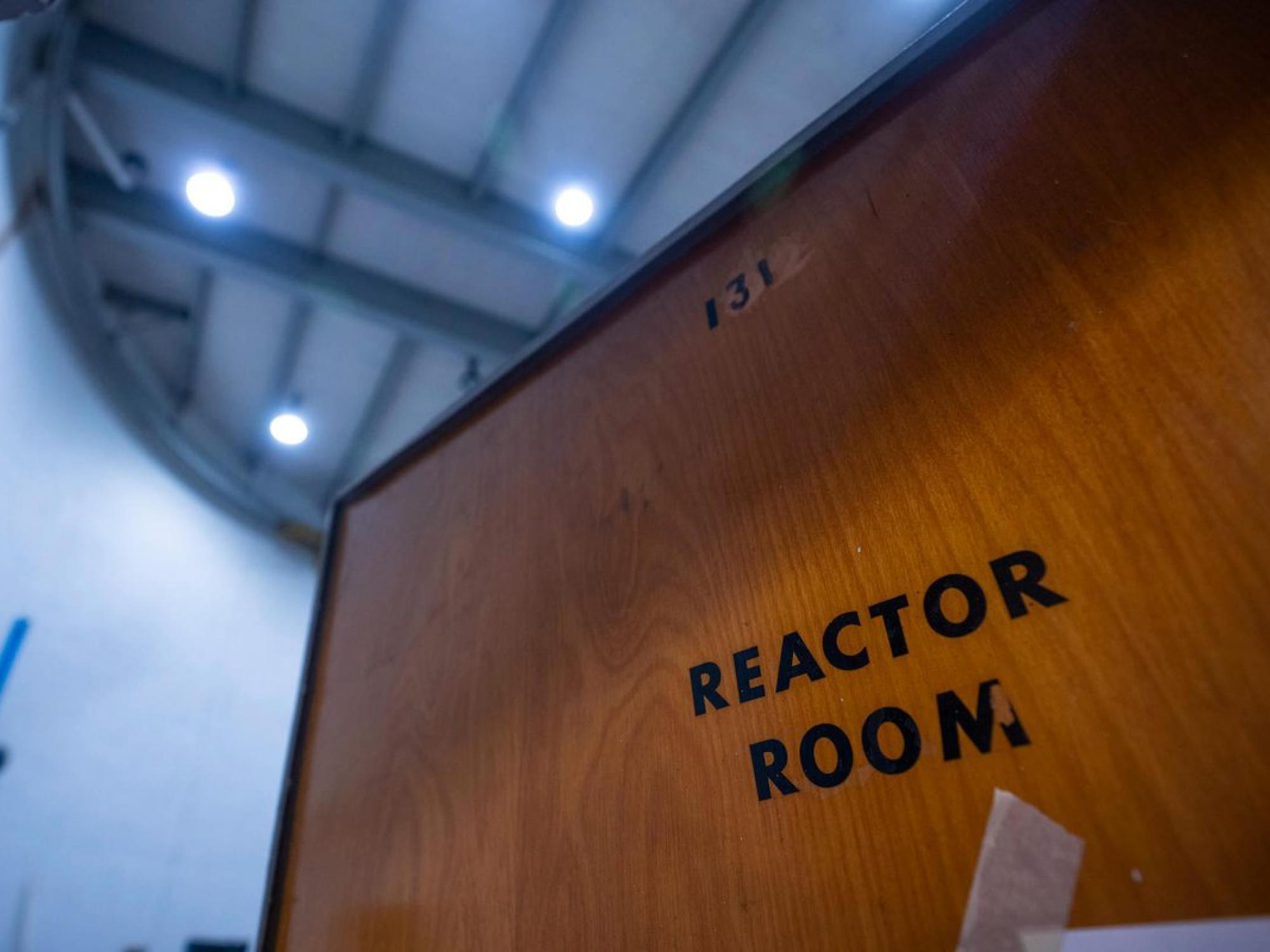 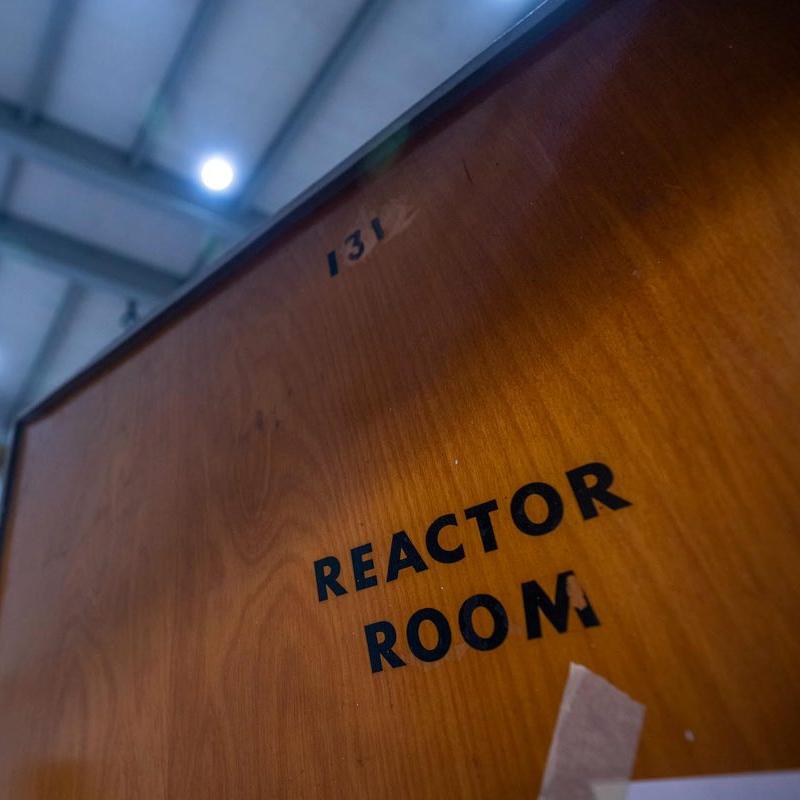 Undergraduates from the University of Virginia’s School of Engineering, some highly charged and others still a little groggy after an early morning jaunt up Observatory Hill, gathered in the foyer of the Observatory Mountain Engineering Research Facility and passed around faded, color photos of long-past scenes in the Cold War-era building.

The students were from engineering professor Keith Williams’ “Introduction to Engineering” course, on a field trip to learn about the glowing-blue pool of irradiated, purified water that once existed here, the nuclear reactor core that sat in the pool, and the consequential role engineers play in developing technology that can help or hurt humanity. 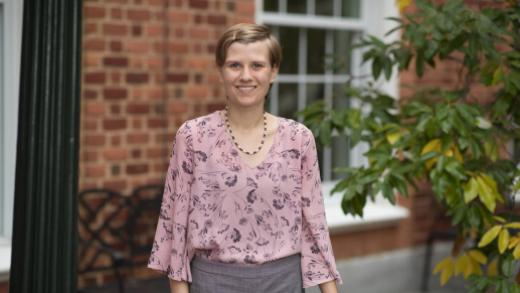 Carved into a rocky hillside and fortified with concrete seven feet thick, the building housed the third-most-powerful research reactor in the nation when it was built in 1960, and for 38 years it gave UVA students unique insight into the world of nuclear reactions.

Neutron bombardment in the bowels of the building produced the last watt of energy at the stroke of midnight on July 1, 1998, a dozen years after the Chernobyl nuclear power plant meltdown and the ensuing dwindling of interest in nuclear engineering research programs around the country. 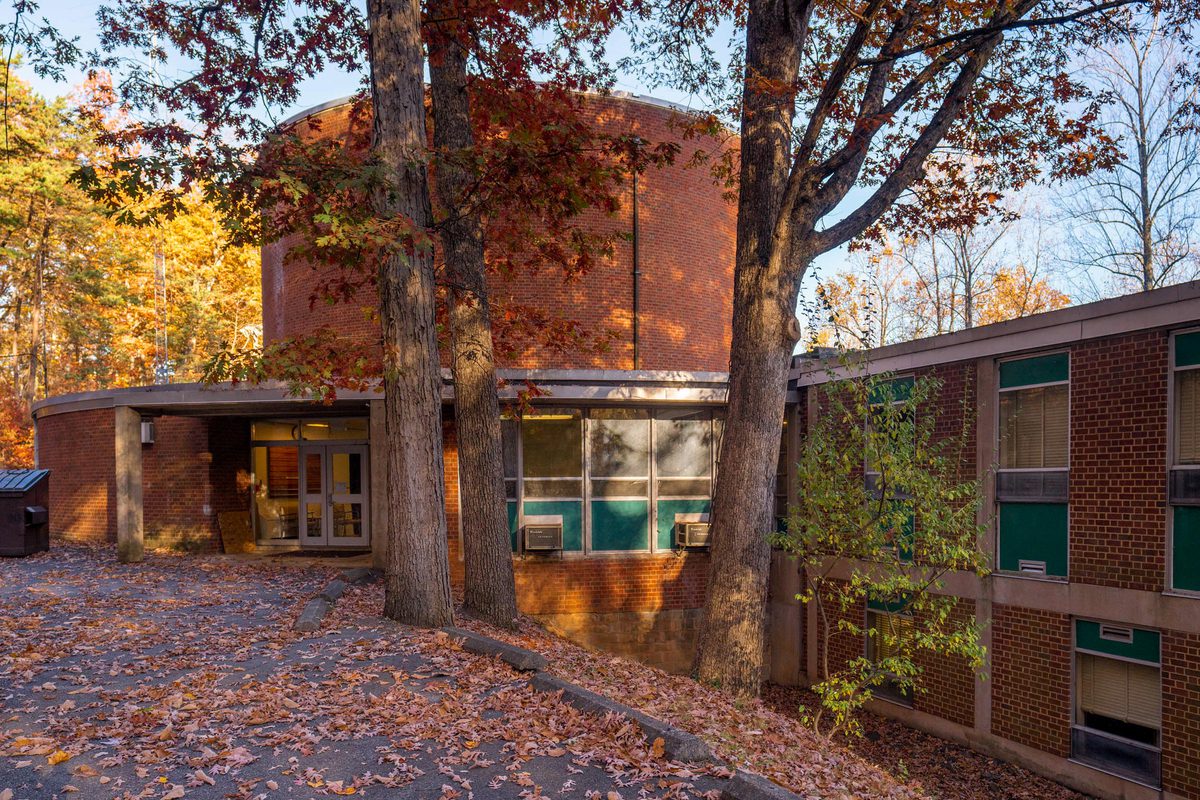 “This did not power the University. You do not get power from a research reactor,” Paul Benneche told the students gathered around him for the tour. Benneche, who was the supervisor of the reactor when it was operational, has overseen day-to-day operations at the building since the mid-1980s.

Benneche waved the students deeper into the decommissioned reactor building. They filed into a cavernous, circular room, dodging the fiberglass shell of a small, white, solar-powered car propped up on a pair of work carts. The building is now used by student groups that need space to build their projects. Benneche stepped up on a wooden platform built over what was the open pool of water housing the reactor.

“Don’t be afraid of being in this building,” he said, but then brought up the fact that many people are. “Radiophobia is a fear of radiation. I’ve met a couple of people that actually had it who literally were terrified of radiation for no particular reason. I think they’ve watched too many ‘Star Trek’ movies.”

In the crowd, Liliana Gomez, a first-year student who is thinking about majoring in computer science, looked up at the high ceiling towering 25 feet above her. “The room made me feel kind of small,” she said.

In her high school physics class, Gomez completed a project about the ramifications of nuclear waste. “While nuclear energy is clean to run, it produces a lot of waste that doesn’t decay for millions of years,” she said. “There are consequences that need to be considered.” 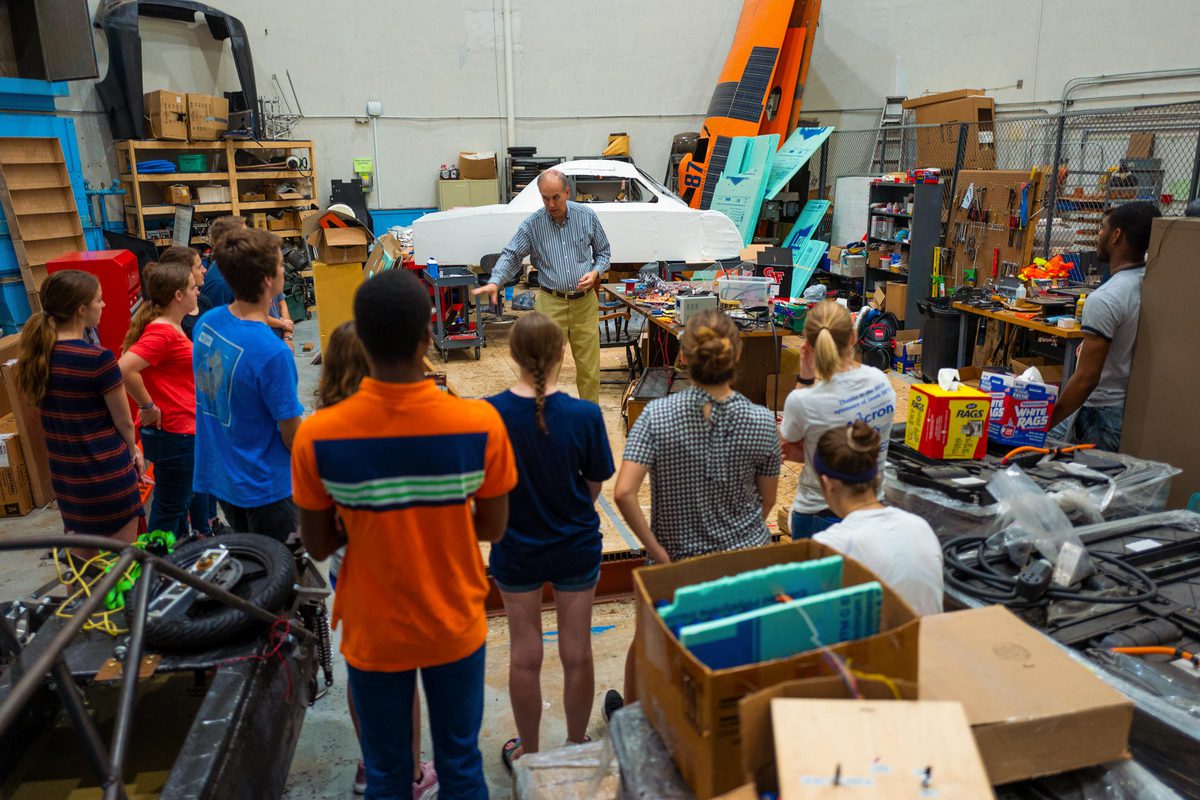 Paul Benneche, who was the supervisor of the reactor when it was operational, gives a tour of the decommissioned building to engineering students. (Photo by Chris Tyree)

The idea that first-year engineers should be considering what happens at the end of life of a piece of technology is one concept that all UVA engineering students are taught in their “Introduction to Engineering” and Science, Technology and Society courses. The goal is to empower and motivate the next generation of engineering professionals so they can make creative, ethical and inspired contributions to the design of our socio-technical future.

“Some students may be thinking, ‘Gosh, we could build more nuclear reactors, and that would help reduce climate change issues’ and so forth. What they need to see is all the safety infrastructure that’s required,” said Williams, who’s been teaching the introductory engineering course for six years. “The other thing is re-purposing. What happens when you invest this much money in a facility, and then you have to decommission it and just leave it?”

Snaking their way around the solar-car parts, tool carts and boxes of plastic foam, the students followed Benneche down into what was the inside of the pool that housed the old reactor. Along the way, he asked the students what the nearest radioactive thing was to them right then. One student suggested her cell phone. “No, your cell phone is not radioactive; it emits radiation, like your microwave. Next guess?” he asked.

“Each other?” another student answered.

“Yes!” exclaimed Benneche. “Our bodies are radioactive. Everything has some number of radioactive atoms in it.”

Stepping into the concrete pool area, Ethan Gahm, a first-year student who’s still undecided on what engineering major he wants to pursue, was awed by the thought that at one time there was enough radiation in that space to kill a person. 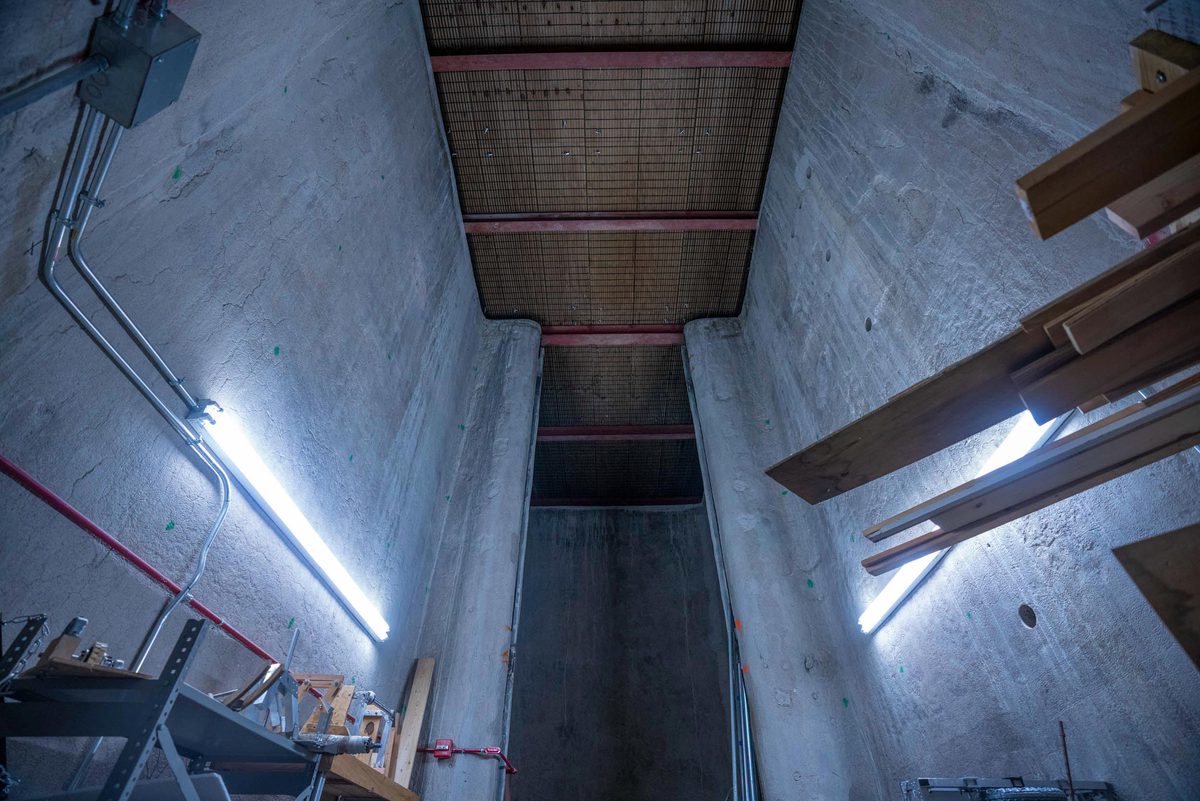 “There are consequences, and then there’s the perception of consequences, and those two aren’t necessarily the same thing, but they both have to be given a weight by engineers,” Gahm said. “Even if something is fundamentally safe, if there’s a perception that it’s unsafe, something needs to be done about that. It’s obviously going to be difficult to make progress on something in that case, even if their fears are not founded.”

Benneche pointed up to the ceiling and reminisced about how the reactor space was built by a swimming pool company. He also expounded on the benefits the reactor had for research for many UVA students and faculty besides those from the Engineering School, including members of the biology department, who used it to research genetics; chemists and physicians interested in isotopes and iridium pellets for cancer therapies; and physicists who studied all of it.

“There are practical consequences to engineering, too. Just because we can doesn’t mean we should,” Gahm said. “I think it’s always important to realize that inventions have effects beyond their immediate scope, and everything’s interconnected; and if you don’t realize that, then there are bound to be unforeseen consequences to any sort of scientific or engineering-related innovation.”

“Our bodies are radioactive. Everything has some number of radioactive atoms in it. ”

Given the rapid rise in carbon dioxide levels in Earth’s atmosphere and the uncertainty over oil and natural gas markets, there has been a resurgence of thought about tapping nuclear-powered energy as a possible clean energy solution despite the inherent toxic waste issues and safety concerns.

“I think this is a good lesson for them to understand that there are so many complexities. It’s not as simple as just saying, ‘Not in my backyard,’” Williams said. “Future generations may actually prefer to have their energy and food sources in their backyard, so they can exercise their own judgement and policy. This is the heart of the ‘local foods’ movement: that we’d prefer to have agriculture in our backyards, so we can take responsibility for the products and the land. What if we applied that same ethic to energy production? I think we’d have to confront the ‘not in my backyard’ attitude and maybe even flip it around, so that people want to have solar and wind and other sources nearby.”

As the students emerged from the reactor building into the bright, autumn sun, Benneche challenged them with one more question: “If I was to try to design a safe nuclear power plant today, how would I do that?” 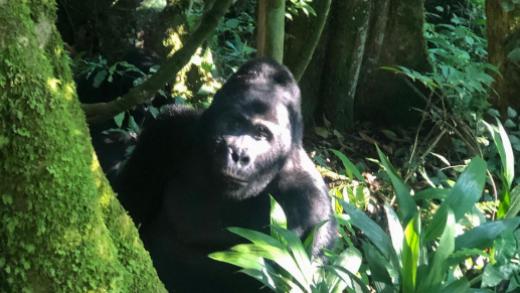 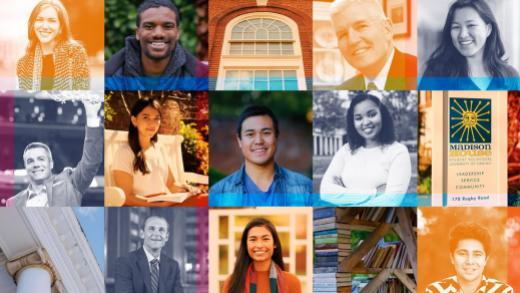 Student-Created Mental Health Forum Erases Stigma of Depression, One Post at a Time 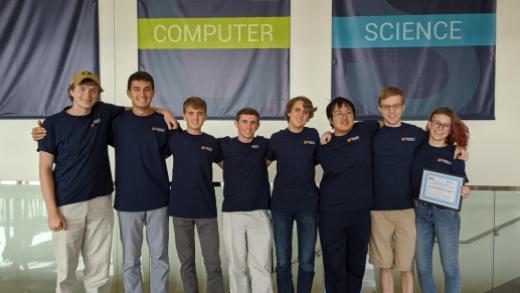