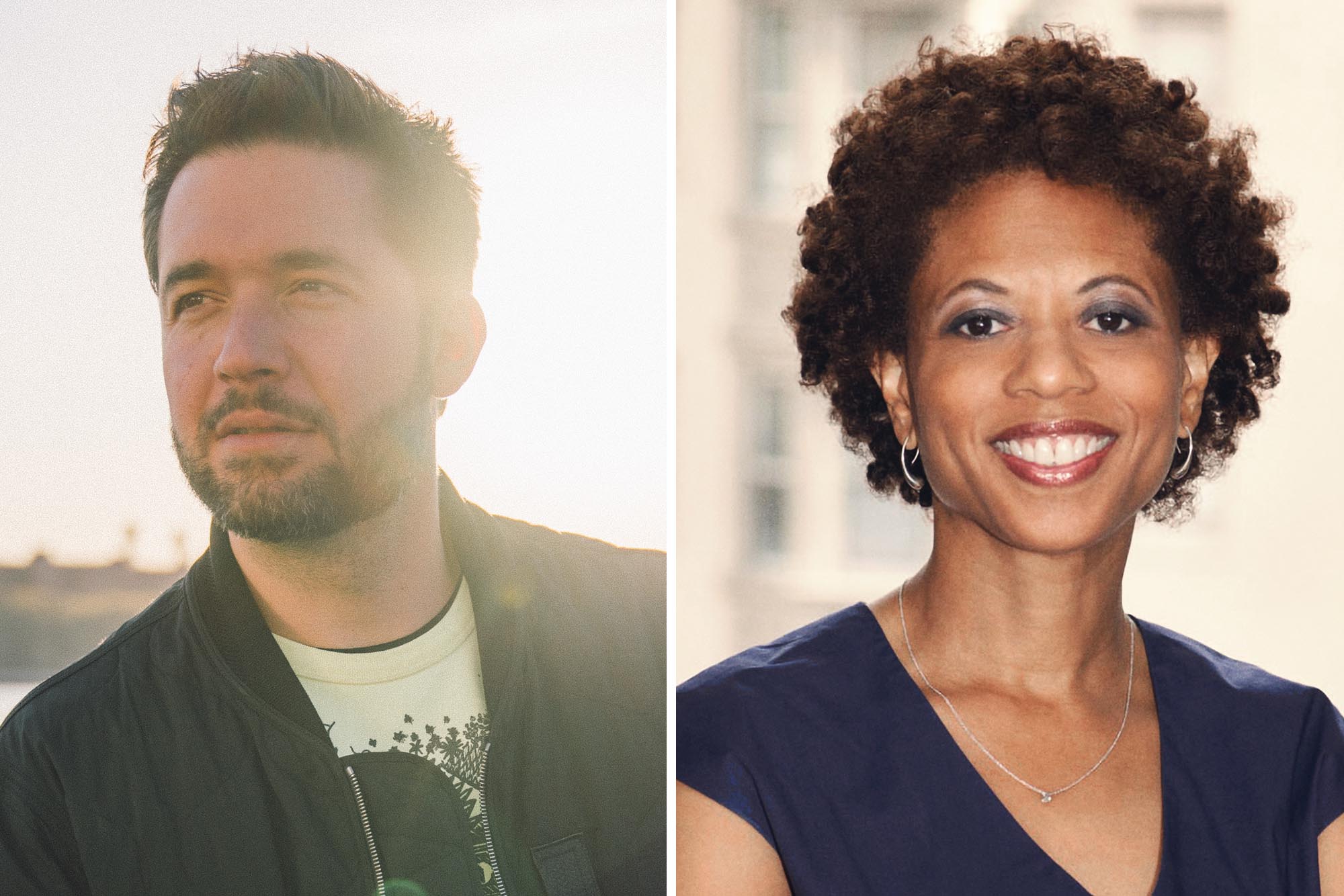 Alumnus Alexis Ohanian, co-founder of Reddit, left, and UVA Democracy Initiative Co-Director Melody Barnes, will address members of the classes of 2021 and 2020, respectively.

Reddit cofounder and venture fund Seven Seven Six founder Alexis Ohanian, a 2005 University of Virginia alumnus, and Melody Barnes, co-director of UVA’s esteemed Democracy Initiative, will be the Final Exercises speakers for the University’s classes of 2021 and 2020, respectively.

Ohanian, the former executive chair of Reddit, will address the Class of 2021 in prerecorded remarks at each of the five ceremonies for all of UVA’s schools during celebrations, which will be staggered over three days, beginning May 21. UVA’s Office of Major Events has a detailed schedule of Final Exercises for the classes of 2020 and 2021. All of the celebrations will be livestreamed.

Barnes is the Dorothy Danforth Compton Professor and a professor of practice at UVA’s Miller Center of Public Affairs. She also is a senior fellow at the Karsh Center for Law & Democracy and affiliated faculty member at UVA’s School of Law.

She has spent more than 25 years crafting public policy on a wide range of domestic issues and is co-founder of the domestic strategy firm MB2 Solutions LLC. She formerly was an adviser to President Barack Obama and director of the White House Domestic Policy Council. A lawyer by trade, Barnes also served as chief counsel to the late U.S. Sen. Edward M. Kennedy on the Senate Judiciary Committee and was executive vice president for policy at the Center for American Progress.

“I can’t imagine any place I’d rather be on Sunday than with the Class of 2020,” Barnes said. “I believe their walk down the Lawn will be even more memorable 365 days after they expected it to take place. What a wonderful moment to consider the role UVA plays in the lives they’re living, now, including their sense of what it means to be an engaged citizen.”

Ohanian earned two degrees from UVA in 2005, one in commerce and the other in history. He co-founded Reddit, the social news aggregation and content-rating platform that same year; it is now valued at $6 billion.

On his personal website, Ohanian describes himself as the son of an undocumented immigrant and as a “business dad.” That is also the name of his podcast, “Business Dad,” in which he interviews fellow fathers about what it means to be a dad in today’s world and how they balance their careers and families. He has also been an outspoken advocate in the push for federally mandated paid family leave and has candidly shared his own experiences in order to bring attention to the issue.

Following the murder of George Floyd in the custody of Minneapolis police officers in May 2020, Ohanian – the husband of tennis superstar Serena Williams – resigned from the board of Reddit after considering how he would answer “his Black daughter when she asks: ‘What did you do?’” to make the world a better place, he writes on his website.

In stepping down in 2020, Ohanian convinced Reddit to ban hate communities and fill his position with a Black candidate, Michael Seibel, who has deep expertise in the tech world.

After leaving Reddit’s day-to-day operations in 2016, Ohanian began a career in venture capital and co-founded Initialized Capital—a seed-stage venture fund with over $770 million under management and a portfolio with $100 billion in market value, with investments in companies like Coinbase and Instacart. In late 2020, Ohanian announced he would be departing Initialized Capital to launch his own venture, Seven Seven Six, a new firm focused on people, culture and community.

Ohanian said speaking at Final Exercises has been on his bucket list. “I’m so fired up,” he said.

“UVA is where it all started for me, and I mean that quite literally. I walked out of an LSAT on Grounds to visit the Waffle House on 29 and realized I shouldn't be a lawyer – I needed to start a startup. I went back to my apartment and convinced my first-year hallmate (Hancock House, left side of the first floor) to quit his job and join me. Professor Mark White of the McIntire School of Commerce was the first person I pitched while on a trip representing UVA at an entrepreneurship summit in Singapore.

“I came up with the name for Reddit in Alderman Library. But most importantly, UVA is where I learned about community – a principle which drove me to create Reddit and continues to influence the work I do every day through my venture firm Seven Seven Six. Even that, a reference to the year of the first Olympic Games, is due to professor J.E. Lendon’s ancient Greece class, which I enjoyed so much I declared my history major first year,” Ohanian said.

“I am grateful for the opportunity I got to attend UVA and all the life-changing people I met there; community has been the theme of my professional career and it all started in Charlottesville,” he said. “I’m honored to be invited to serve as this year’s commencement speaker and look forward to (virtually) going back to where it all started with the Class of 2021. Wahoowa!”

In order to maintain healthy distancing, all of the celebrations for the classes of 2020 and 2021 have been reduced in size in order to adhere to University and state safety guidelines. Members of both classes will take part in the traditional procession down the Lawn, then make a right turn and head to Scott Stadium – where there’s more room for the graduates and their guests to spread out – for the ceremonies themselves.

Students in the Class of 2021 also have organized this year’s Valedictory Exercises, to be held virtually, which will feature a review of students’ last four years at UVA and the bestowing of class and University awards. The keynote speaker for the event is comedian Jay Pharoah, best known for his stint on “Saturday Night Live” and his impersonations of Eddie Murphy, Chris Rock and Jay Z. A Valedictory Exercises watch party will take place May 20 at 6 p.m. in Scott Stadium and will also be streamed live.