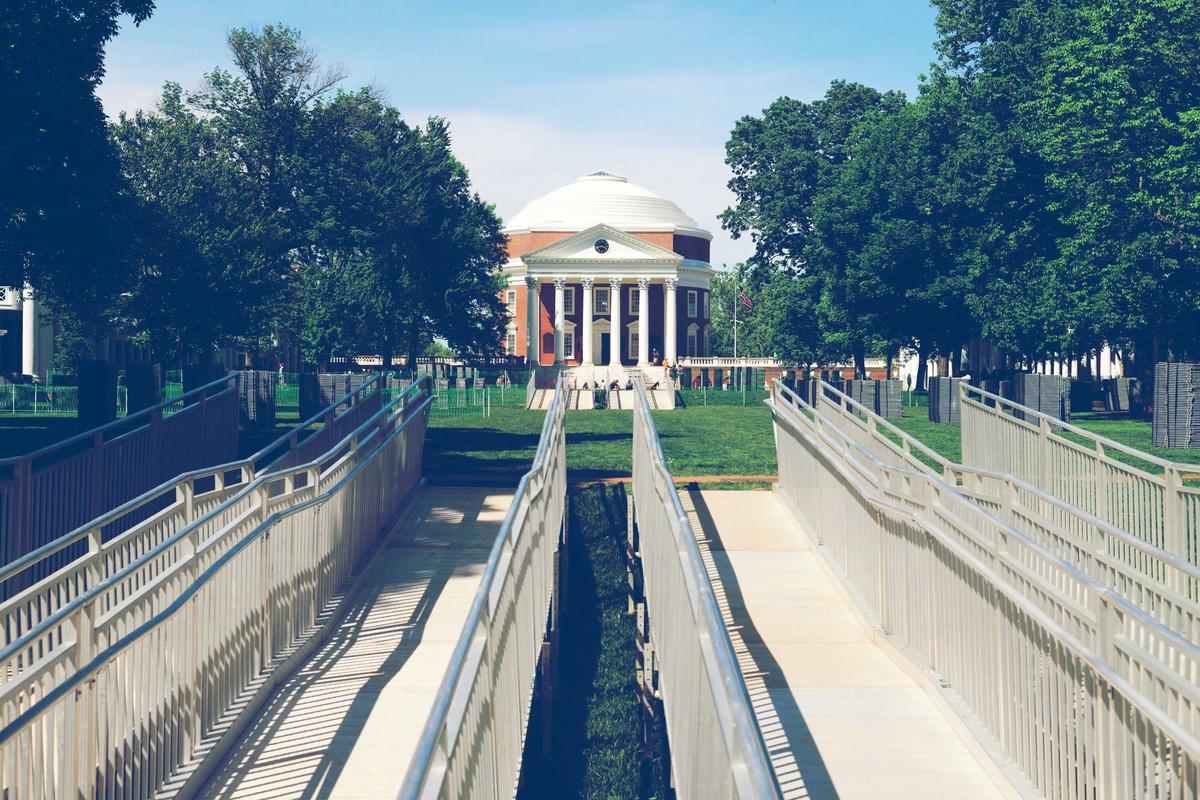 The construction fences have come down (temporarily) and the University of Virginia’s iconic Rotunda, off limits for the past two years due to ongoing renovations, is ready to resume its traditional role during this weekend’s Final Exercises.

Graduates will be able to follow UVA tradition on Saturday and Sunday, amassing on the newly reopened north plaza of the Rotunda, ascending the north portico stairs to terraces around both sides of the building and walking down the south portico stairs onto the Lawn.

Access to all other areas of the building will still be prohibited by security personnel, and the construction fences will go back up after Final Exercises.

“The only ones who will be able to walk on the Rotunda terrace will be graduates and faculty participants in the ceremonies,” said Sarita M. Herman, historic preservation project coordinator for Facilities Planning and Construction.

During the graduation ceremonies, the southwest crytoporticus – the walkway under the south terrace – will be open to allow wheelchair access to the upper tier of the Lawn.

The majority of the exterior work is completed on the building. The east and west courtyards and eastern laydown area, where the construction trailers and materials are kept, remain closed, and the interior still requires additional finishing work.

Those original capitals were mostly destroyed in the 1895 fire that heavily damaged the building. They were replaced by capitals hewn from domestic marble, which began crumbling after 115 years and could not be repaired.

Craftsmen from the Pedrini Sculpture Studio in Carrara laser-scanned the surviving pieces of the original capitals and worked from original drawings to recreate Jefferson’s design.

While marching down the steps of the Rotunda has been a graduation tradition for generations, the building has not necessarily been an integral part of the students’ lives for years, something the renovations are designed to remedy.

“The Rotunda is the symbol of the institution,” said Brian Hogg, senior preservation planner in the Office of the University Architect. “It is the most important building on Grounds, perhaps the most important building in the state, and it is part of a World Heritage Site. We need to use it and to make sure that students get inside the building, because they have not always felt welcome in the past.”

After undergoing two years of renovation, the Rotunda will host classes and be open to students for studying as well as for socializing. The Lower West Oval Room, in the drum of the building, will be used as a classroom several days each week, while the southeast wing will house two classrooms. The southwest wing has been converted into a multipurpose room to be used for receptions, meetings and lectures. The multipurpose room will have doors that open onto the west courtyard to incorporate that space into events. Both of the southern wings had formerly been used as office space.

Jefferson originally designed the Rotunda to house classrooms and the University’s library. After the 1895 fire, New York architect Stanford White expanded those uses, adding two north wings that first served as classrooms, and later hosted the expanded library. This role ceased in the late 1930s, when the library moved into the newly constructed Alderman Library.

The library’s move across McCormick Road effectively ended regular student involvement in the building, save for a few special events. The wings were converted into office space, while the central part of the building remained without dedicated student uses. In the 1970s, the McKim, Mead and White interior was removed and replaced with a recreation of the Jefferson design.

Under the new, expanded study hours that begin this fall, students will have access to the Rotunda from 5 p.m. to 10 p.m. three days a week, with additional hours during examination periods, to use the Upper West Oval Room, the Dome Room and the middle gallery. Comfortable study furniture will be available for the students throughout these spaces.

The Rotunda will also be a hub of social activity, Hogg said, with the re-launching in the fall of “Dome Room Dinners,” formal affairs for first-year students grouped by residence hall associations.