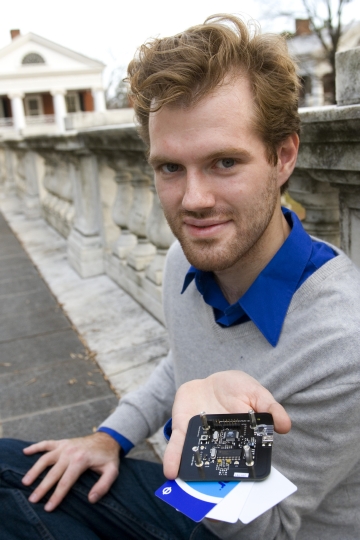 University of Virginia graduate Karsten Nohl, one of the world’s most famous “white hat computer hackers,” will speak Friday at 3:30 p.m. in Rice Hall, room 130, about lessons learned from the security holes that he and fellow researchers have uncovered in mobile phones, wireless car keys and other technology used by billions of people everyday.

Nohl first made international headlines in 2008, while still a computer engineering doctoral student at U.Va., for research that exposed vulnerabilities in the world’s most popular smartcard, used by millions of people to pay fares on several major mass-transit systems around the world, including the London Underground and the Boston subway.

Such cards utilize miniscule wireless computer chips, about the size of a grain of rice, called RFIDs, short for “radio-frequency identification.” They send and receive information over short distances (generally 10 feet or less) via very low-power radio waves.

As an ethical security researcher, often called a “white hat hacker,” Nohl exposes vulnerabilities to spur improvements in the systems that he researches. He now does such work around the world as the founder and director of research at Security Research Labs in Berlin.

To prevent those with nefarious purposes from exploiting security holes he uncovers, Nohl typically withholds key details of the exploit and discloses his findings only months after sharing his research with the relevant manufacturers or trade organizations to allow them to roll out upgrades or countermeasures to mitigate the security risk.

Since graduating from U.Va. in August 2008, Nohl has gone on to discover and demonstrate two key security vulnerabilities in mobile phones – encryption flaws in both the GSM protocol that most cell phones use to communicate with cell towers, and in SIM cards, the tiny “subscriber identity module” chip in every phone that identifies and authenticates the phone.

As just one example of possible ramifications, the latter security hole could allow a malicious hacker to send a virus through a text message, which could then allow the hacker to eavesdrop on calls or make purchases through mobile payment systems.

“Karsten has had an outstanding impact in analyzing how cryptography gets used in the real world and demonstrating what goes wrong when important engineering principles are not followed carefully,” said computer science professor David Evans, Nohl’s former doctoral adviser and a co-organizer of Friday’s talk. “The vulnerabilities he has identified in RFID algorithms, GSM encryption and SIM cards impact billions of devices most of us use every day, and it’s really important that people understand the security weaknesses in these systems and that vendors work to improve them. Karsten’s work is a fundamental step toward those goals.”

Nohl’s talk will discuss how security exploits with real-world implications are usually enabled by not just one design flaw, but by deviations from best practices on multiple design layers. Protection designs that focus on a single security function and neglect complementary layers are more prone to compromise, Nohl will argue, with examples from his own research on three widely deployed technologies – cell phones, car keys and smartcards.

“Real-world cryptographic systems rarely meet academic expectations, with most systems being shown ‘insecure’ at some point,” Nohl said in an email description of his talk. “At the same time, our IT-driven world has not yet fallen apart, suggesting that many protection mechanisms are ‘secure enough’ for how they are employed.”

The talk will be followed by a reception in the fourth-floor atrium of Rice Hall.

The event is co-sponsored by the departments of Computer Science and Electrical and Computer Engineering, which jointly administer U.Va.’s computer engineering Program in the School of Engineering and Applied Science.