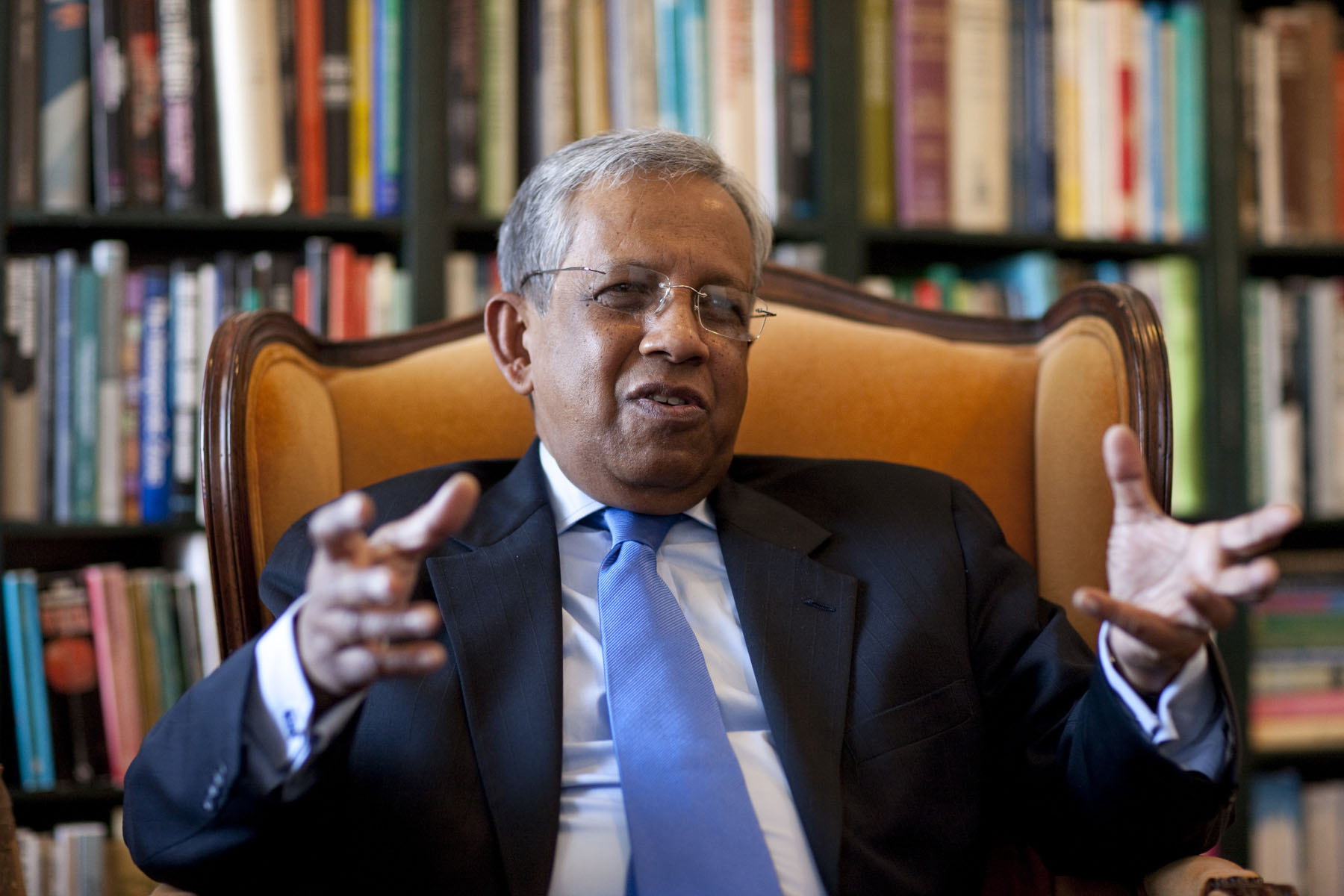 February 24, 2010 — The man credited with overseeing the most successful elections in Bangladesh's history, Fakhruddin Ahmed, is undertaking a yearlong appointment at the University of Virginia as a distinguished visiting scholar.

Ahmed is a guest of the Center for International Studies and will be a visiting scholar through December, spending about two days a week at the University.

The former chief adviser of Bangladesh's caretaker government will conduct research, meet faculty and students, take part in lectures and seminars and have the opportunity to conduct them himself.

Ahmed, who administered Bangladesh's government from January 2007 to December 2008, said his research will focus on the evolution of democracy in developing countries.

"How do you strengthen democracy, particularly in a developing country?" he asked. "Developing countries want to develop much faster. In democratic terms, in the democratic process, they also want to move faster. How do we do that?"

Ahmed says he will draw from his nearly two years as the head of Bangladesh's caretaker government and apply what he learned to his research. He was sworn in as chief adviser on Jan. 12, 2007, with the mandate of handing over power to a democratically elected government.

One of Ahmed's largest challenges as caretaker was dealing with the country's tainted voter rolls, which contained more than 12 million fake or duplicate names.

"That was one of the targets that we set for our government: We must have an electoral roll which will be error-free," he said.

To eliminate voter fraud, Ahmed's administration decided to photograph each voter and place the photo, along with identification information, on the voter roll. The actual job took a little over a year. "There were 81 million voters on the roll; all of them had to be photographed with all the details. I think it was a tremendous achievement by any country standard, whether developed or developing."

Once the voter rolls were clean, Ahmed's government worked to ensure people felt not only absolutely free to cast their votes, but also welcome at the voting booths. Polling officers and law enforcement agencies "were given the mandate that you have to be absolutely neutral and at the same time friendly to the voters," he said.

Ahmed said this created an atmosphere that election observers praised. "The voters came out in large numbers, including women. About 87 percent voted. Everybody said, 'This is like a festival,'" he recalled. His Government also carried out major institutional reforms, strengthening existing institutions and creating new ones, all with the objective of strengthening good governance and democracy."

The Awami League, led by Sheikh Hasina, beat the Bangladesh Nationalist Party in a landslide in the 2008 elections.

Prior to his appointment as head of the caretaker government, Ahmed was managing director of a Bangladeshi-based microcredit fund, the Palli Karma-Sahayak Foundation, or PKSF, from June 2005 to January 2007. From 2001 to 2005, Ahmed served as the governor of the Bangladesh Bank, where one of his achievements was to oversee the floating of the Bangladeshi currency without any turmoil in the market. Before that, he worked at the World Bank for more than 20 years.

Ahmed says he would be thrilled to share his experience with microcredit with U.Va.'s students. "I would be very, very happy to do that," Ahmed said, smiling. "This is an area I am very enthusiastic about.

"PKSF is an apex fund which provides financial support to microfinance institutions and simultaneously gives technical support to strengthen those institutions," he said, adding that it also functioned as a quasi-regulator of the industry because there was no formal regulator set up by the Bangladeshi government.

"We supported farmers and agriculture; the hard-core poor; women who wanted to become not just self-employed, but wanted to grow big and employ wage earners, expand their business," Ahmed said. "It was a big challenge to go into those areas."

He said it was not much of a shift to go from running Bangladesh's central bank to running PKSF. "I moved from macro finance entirely to the other end of the spectrum and went straight into microfinance," he said. It's all about institution-building, he added, and good institutions are important for economic growth and social advancement. "This is also about financing economic growth and economic activity, whether at a micro or large enterprise level."

A Year We Will Never Forget: 2019-20 in Review END_OF_DOCUMENT_TOKEN_TO_BE_REPLACED

‘What Will You Carry With You?’ Remarks From UVA President Jim Ryan END_OF_DOCUMENT_TOKEN_TO_BE_REPLACED