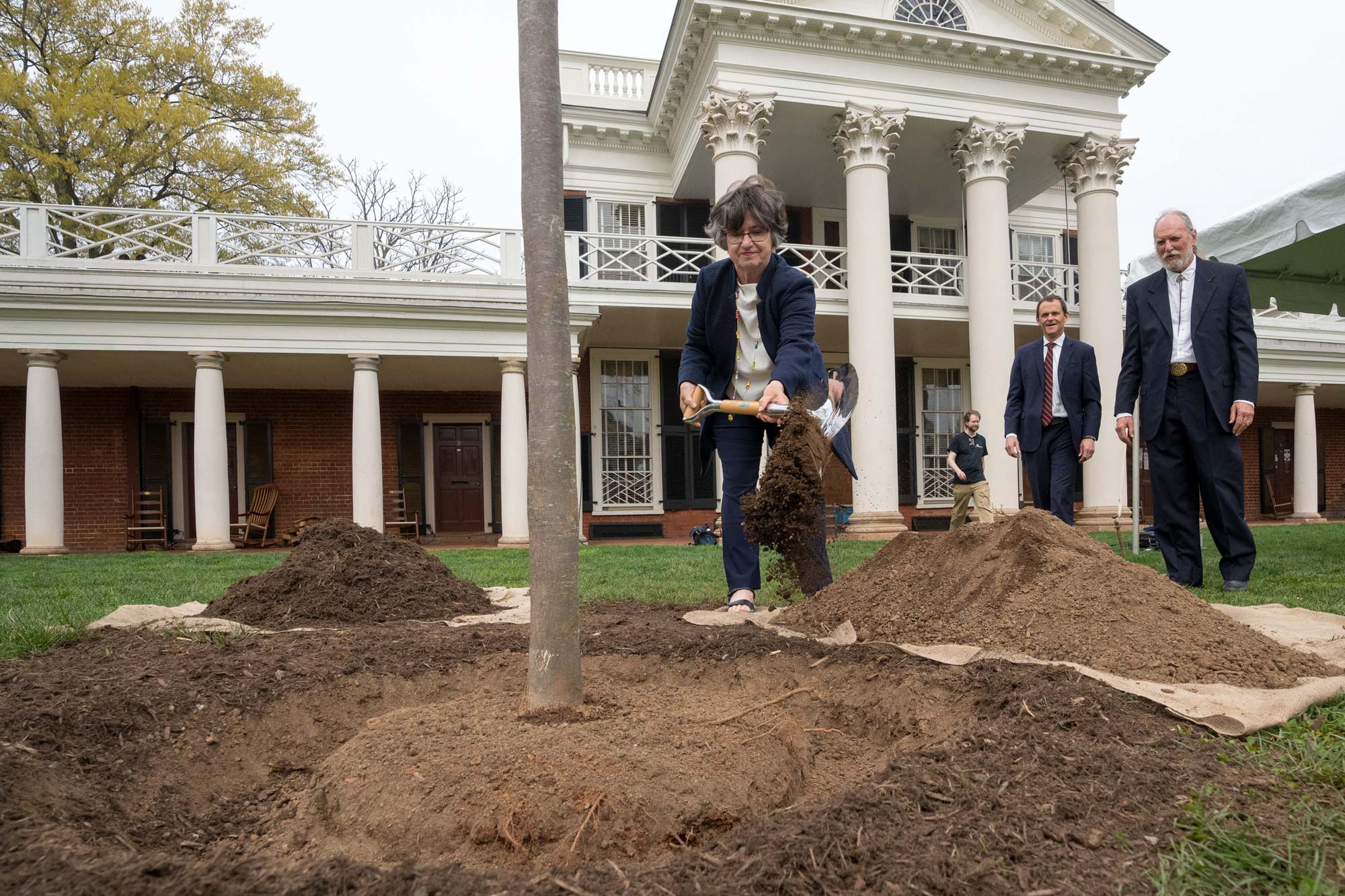 About 70 people gathered Wednesday in front of Pavilion III under a softly overcast sky to honor Mary Hughes, the retired landscape architect for the University of Virginia.

Hughes joined the ranks of luminaries honored at the University with trees as living monuments – in her case, with a Jefferson elm.

“I am deeply moved to have a tree planted on the Lawn in my honor,” said Hughes, who retired in January. “I never expected this and still can hardly believe it’s happening.”

On Founder’s Day each year, the University president officiates at the tree planting, with the Arboretum and Landscape Committee selecting the honorees. During the Wednesday ceremony, President Jim Ryan spoke of Hughes’ contributions to the University.

“When you ask her friends about Mary Hughes, they say that she is smart, loyal and feisty, with an unmatched knowledge of Grounds,” Ryan said. “And they also say she has a wicked sense of humor.” 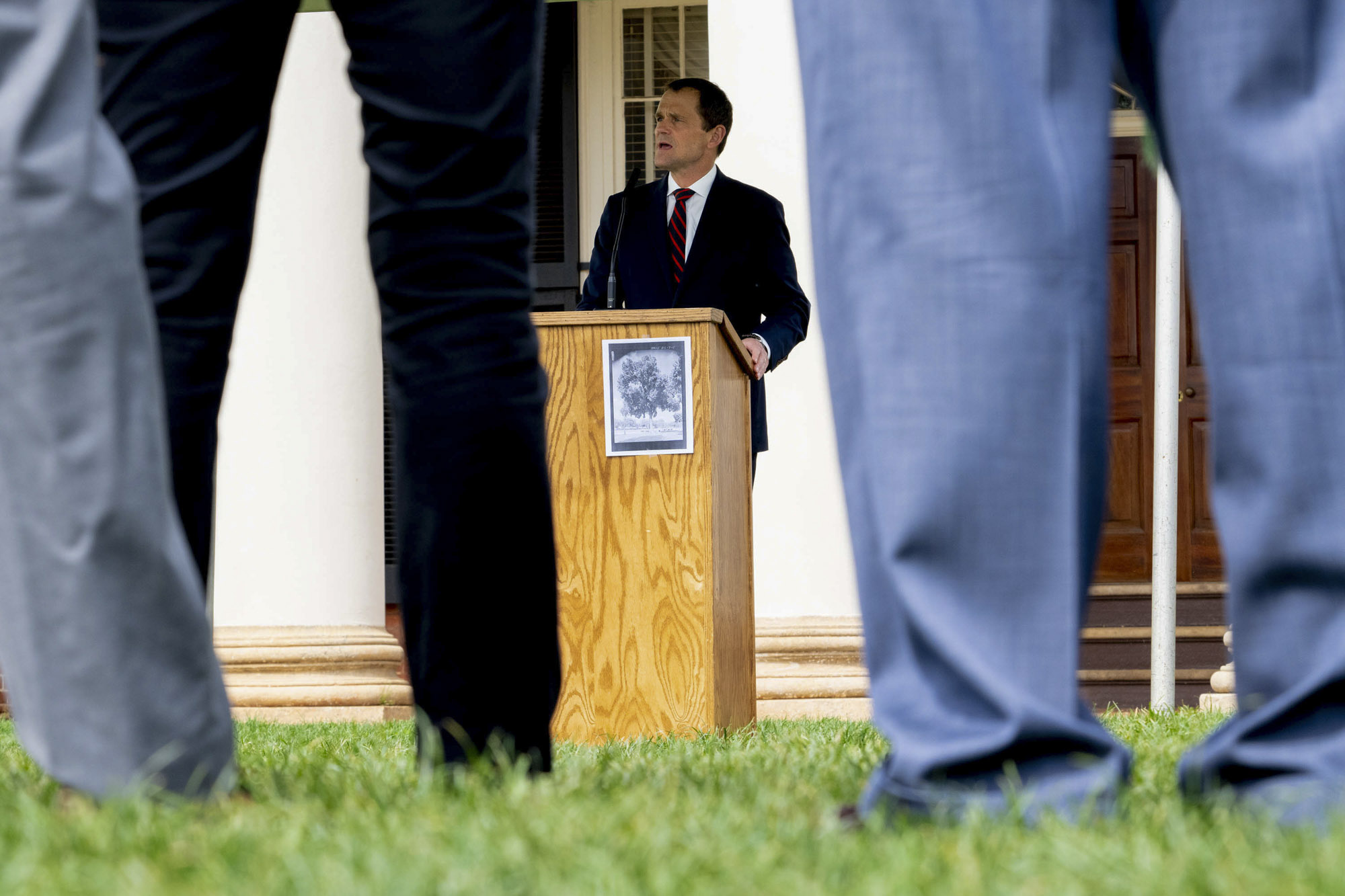 Ryan praised Hughes for incorporating stewardship with being a visionary leader who managed the first landscape master plan of the Grounds. He also said she deepened the understanding of the history of the Grounds; as a member of the President’s Commission on Slavery and the University, she helped shape the Memorial to Enslaved Laborers, which was formally dedicated a year ago.

Ryan noted that Hughes, who began serving as UVA’s landscape architect in 1996, is a 1987 graduate of the School of Architecture. A fellow of the American Society of Landscape Architects, she served as co-director of the Historic Landscape Institute, an adult education program jointly sponsored by UVA and Monticello, featuring the Jeffersonian landscapes of Central Virginia as laboratories for applying historical horticulture and preservation practices.

“While at UVA, she expanded awareness of the landscape beyond the Academical Village, both developed and wild lands,” Ryan said. “She secured funding for a multiyear research project on the history of land-use and landscape design of the University Grounds, which resulted in summer internship opportunities for UVA landscape architecture students and enriched the cultural landscape curriculum.”

Ryan cited her interest in history, and how Hughes encouraged research and archaeology on the history of a free Black settlement founded in the 1830s by Katherine “Kitty” Foster, adjacent to and below the Academical Village. This research resulted in a design commission for the public spaces of the South Lawn project. 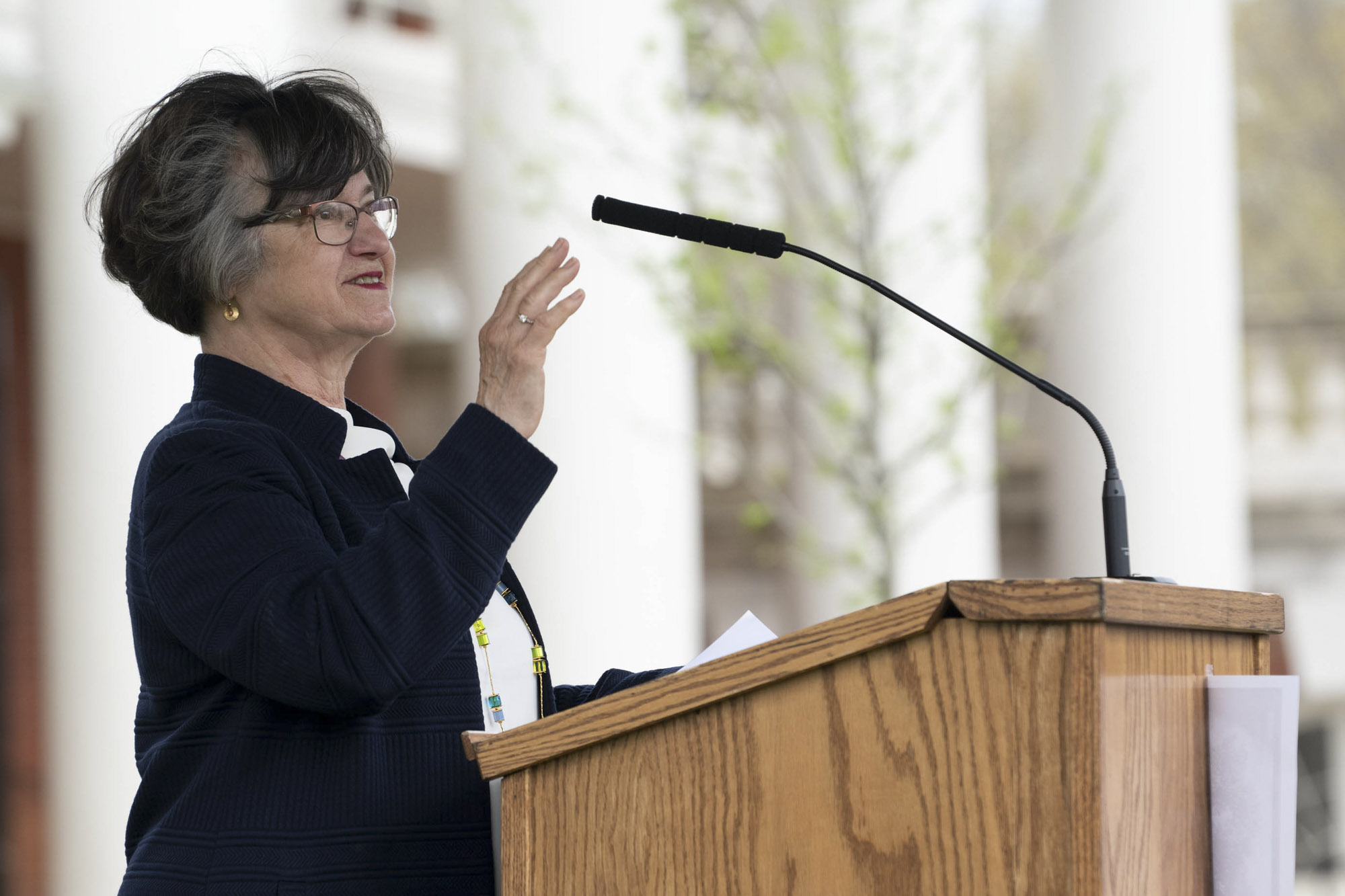 At Hughes’ urging, the University completed a comprehensive study of the waterways and storm water system of the University’s lands, which resulted in a stormwater master plan created by Andropogon Associates, and an American Society of Landscape Architects award-winning design project for the Dell, a public park and stormwater management system designed by Warren Byrd of Nelson Byrd Woltz.

Hughes was co-editor, with Charles Birnbaum, of the book “Design with Culture: Claiming America’s Landscape Heritage,” which chronicled the origins of the landscape preservation movement in the United States. In 2012, Hughes received the Lagasse Medal from the American Society of Landscape Architects for conservation and stewardship of the public landscape.

Since retiring, Hughes is a full-time vintner, running Jump Mountain Vineyards in Rockbridge Baths, an enterprise she started in 2006 with her husband, David Vermillion, a retired technical analyst in UVA’s Information Technology Services who also attended the ceremony.

Hughes said she was highly honored to be selected by the Arboretum and Landscape Committee.

“The gathering of the UVA ‘family’ to plant a tree together is such a heart-warming and optimistic action, affirming the belief that the University will continue to thrive just as this tree will bestow its benefits on generations of students for decades, and hopefully centuries, to come,” Hughes said. “It is even more special to me because this tree will establish a third generation of trees on the Lawn, just as the University is entering its third century.”

Hughes said the first trees on the Lawn were black locusts, a nitrogen-fixing pioneer species that does well in exhausted agricultural land, but is short-lived. By the mid-19th century, they were being replaced by ash and maple trees. But now, with ash trees threated by the emerald ash borer, Hughes noted it was prudent to expand the varieties.

“I am hoping it will be the tallest tree on the Lawn,” she said of the Jefferson elm. “I want to be remembered as tall and thin.”

Worthy Martin, an associate professor of computer science in the School of Engineering and the chair of the Arboretum and Landscape Committee, also spoke at the ceremony, outlining the history of the Jefferson elm, a cultivar of the American elm. Planted during the Frederick Law Olmsted Jr. design/construction period of the National Mall in the 1930s, the tree was determined to be resistant to the Dutch elm disease that devastated elm trees across the country. 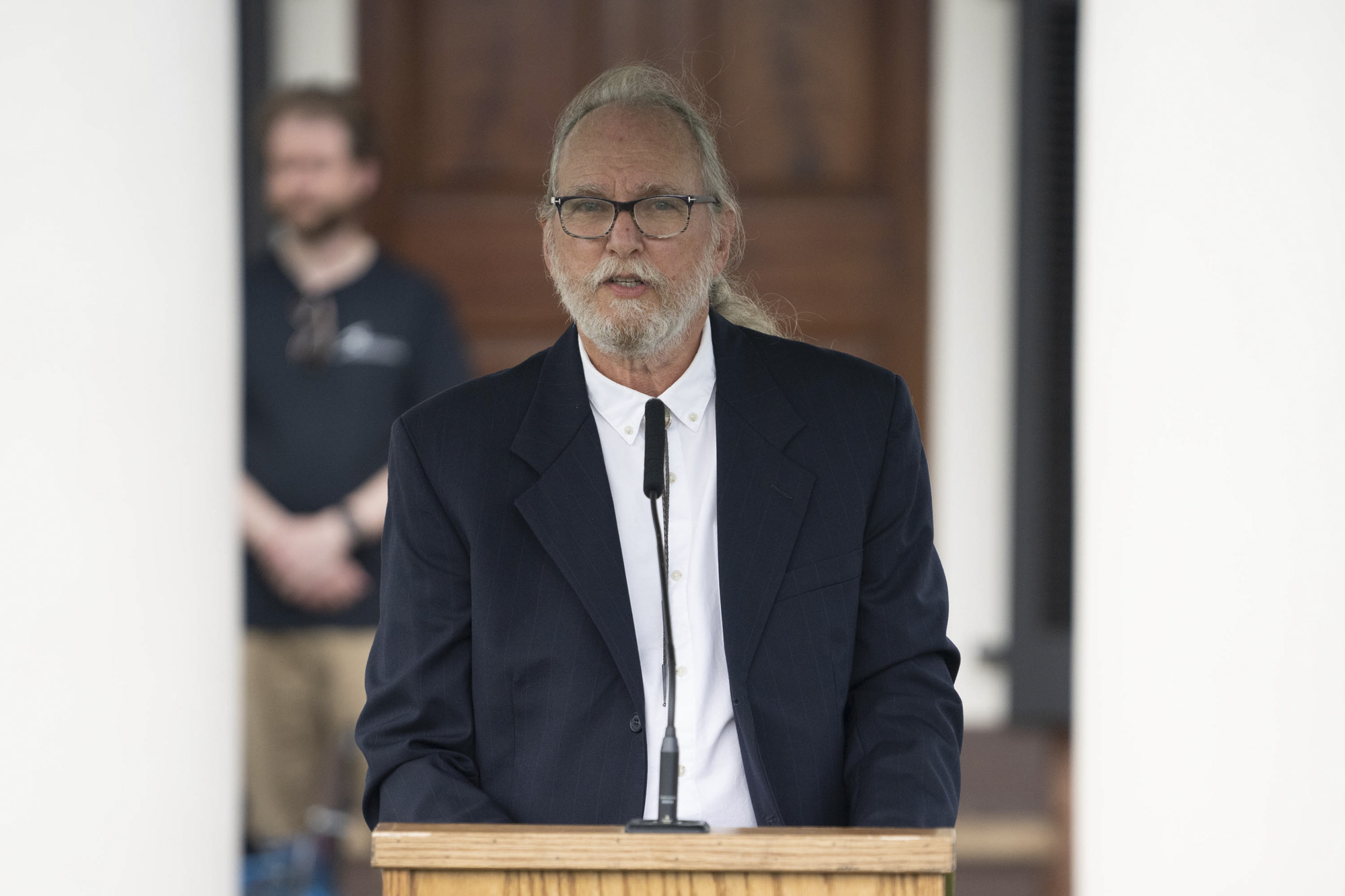 In the 1990s, the tree was vegetatively propagated and genetically cloned. Specimens were grown in the National Arboretum, where the clones were inoculated with the Dutch elm disease to strengthen their resistance to infection. These clones were released by the U.S. Department of Agriculture to the nursery industry in 2005 under the name “Jefferson elm” – so named because the original tree on the National Mall stood near the Jefferson Monument.

“I have long admired the Jefferson elm and hoped it could be planted here one day – not only because of its name, but because it has proved its merit as a tough, urban tree that has survived and flourished on the Mall in Washington, D.C., for many years,” Hughes said before the ceremony. “If it survives all the gatherings that take place in our national ‘front lawn,’ it should be able to survive Final Exercises and a few Frisbee games and hammocks.”

The treasured shade tree grows quickly into a vase shape. The stately tree has dark green leaves that turn golden in the fall. It is cold-hardy, widely adaptable and tolerates urban conditions and periodic drought. 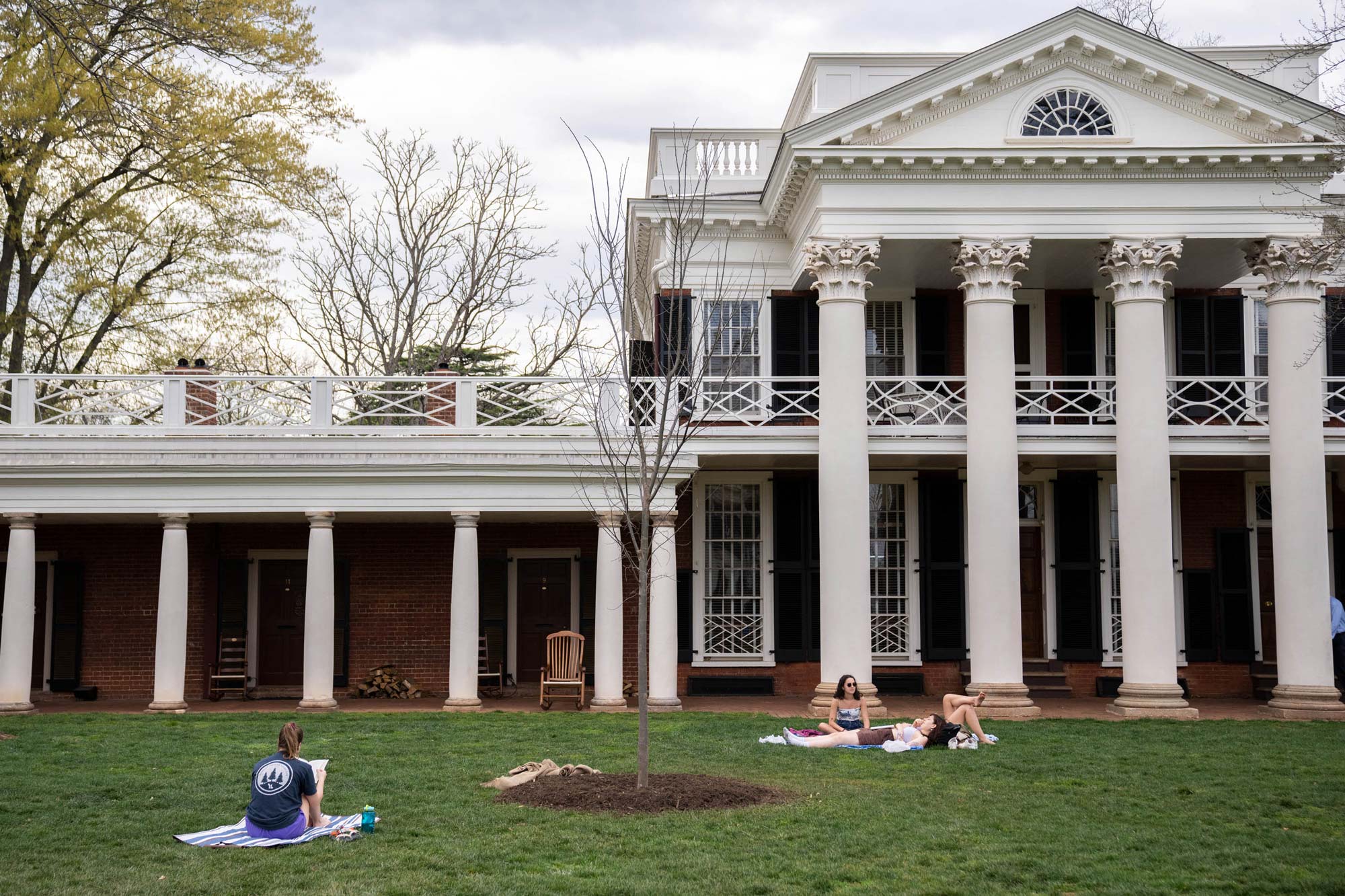 “I think the elm will be a great choice,” Hughes said. “It grows tall and branches high with the classic elm ‘vase shape,’ so it will not obscure views of the Pavilion facades. It has also proved to be tolerant of soil compaction from foot traffic and other impacts, which is a perennial problem on the Lawn.”

What’s Next for UVA’s Class of 2022? END_OF_DOCUMENT_TOKEN_TO_BE_REPLACED