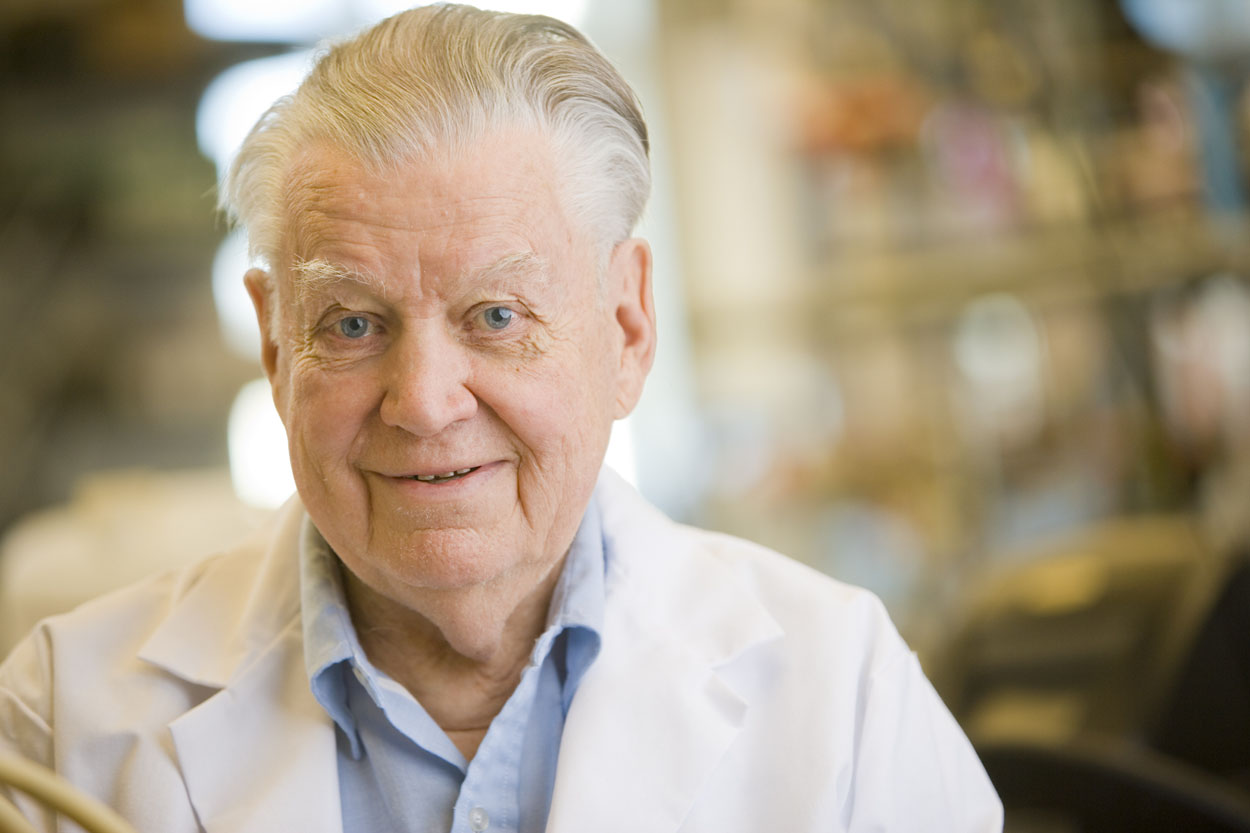 The announcement was made today in Athens, Ohio, by Ohio University and the National Academy of Engineering.

The engineering equivalent of the Nobel Prize, the Russ Prize is awarded biennially to a researcher whose achievements are of critical importance, advance science and engineering, and ultimately improve the human condition.

Administered by the engineering academy, the prize was established in 1999 with a multimillion-dollar endowment to Ohio University from the Russes. The Russ Prize honors recipients with a $500,000 cash award and a gold medallion, which will be presented to Gaden during a gala dinner Feb. 17 in Washington, D.C.

U.Va. President John T. Casteen called Gaden "a man for all seasons within the University and globally among researchers" and noted that he was recognized decades ago as "the father of biochemical engineering."

"Every physician who prescribes antibiotics developed by biochemical engineers delivers products of Mr. Gaden's work to patients who may never know his name," Casteen said.

James Aylor, dean of U.Va.'s School of Engineering and Applied Science, applauded Gaden's skills as both a researcher and teacher. "In fact, he enjoyed both so much that he continued to teach and remained involved in research well after he retired.

"The University of Virginia and the Engineering School are very proud of our association with him."

Gaden was ahead of his time, said Robert J. Davis, chairman of the Department of Chemical Engineering. "His avid curiosity, intellect, dedication to pushing the boundaries of research and encouraging the best from his students combined to produce an excellent individual who richly deserves this recognition," Davis said.

Gaden's research began more than 50 years ago while he was a student at Columbia University, working toward his doctorate. During this postwar period, antibiotics were increasingly in demand – particularly penicillin, which had been successfully used to treat battlefield injuries.

Drug companies were looking for methods of quickly growing mass quantities of the mold-derived drug. Chemical engineers began experimenting with a mechanical process of microbial fermentation – used primarily to produce yeast for food.

Gaden, building on a lifelong interest in biology and medicine, instead decided to focus on accelerating the yeast's growth. Through the engineering concept of mass transfer – in this case, the movement of molecules and atoms through the yeast cells while in a fluid – he then introduced oxygen to the yeast, providing more fermentation energy that enables yeast to grow and multiply more rapidly, thereby providing the method of large-scale antibiotics manufacturing.

"The greatest single contribution of modern biotechnology to the advancement of human health has been the global availability of antibiotics," said Jerome Schultz, professor and chair of bioengineering at the University of California, Riverside.

The accomplishment, in fact, launched a new field.

"Gaden successfully melded engineering with biology, thereby forming the new scientific specialty: bioengineering," said Boyd Woodruff, former executive director of biological science for the Merck Research Laboratories. "He has been the creative leader of the field throughout his career."

Gaden also established the international research journal Biotechnology and Bioengineering, the first of its kind and now recognized as the leading journal worldwide for the profession. He served as its editor for 25 years. Following his retirement, the publication established the Gaden Award in his honor, which recognizes the most outstanding paper of the year.

Gaden's work has had a global impact, changing medical practices in nearly every country by the availability of penicillin and antibiotics. His methods remain commonplace today and are still applied to produce numerous drugs, including insulin and interferon. Today the antibiotic market is estimated at more than $25 billion worldwide.

Other than a brief stint at the drug company Pfizer, Gaden spent his entire career teaching and collaborating in academia, first at Columbia, then in teaching and administrative appointments at the universities of Vermont and Virginia.

Between 1974 and 1979, Gaden served as dean of the College of Engineering, Mathematics and Business Administration at the University of Vermont. He joined the U.Va. engineering faculty in 1979 as the Wills Johnson Professor, chaired the Department of Chemical Engineering for three years, and remained at U.Va. until his retirement in 1994.

Gaden's dedication to his students has paid endless dividends. They have become education and industry leaders in biotechnology and bioengineering.

"I'm happy as long as I'm addressing myself to a real need," he once told Chemical and Engineering News. "That can be real enrichment of the soul."

Ohio University President Roderick J. McDavis and Russ College of Engineering and Technology Dean Dennis Irwin will join the National Academy of Engineering in the presentation of the award.

About the Russ Prize

The Fritz J. and Dolores H. Russ Prize was established in 1999 with an endowment from the Russes. Fritz Russ graduated from Ohio University in 1942 with a degree in electrical engineering, later founding Systems Research Laboratories, which specialized in the research and development of electronic systems and automatic control processes. Russ College, the school of engineering at Ohio University, is also named for the Russes.

About the National Academy of Engineering

The National Academy of Engineering is an independent, nonprofit institution. Its members consist of the nation's premier engineers, who are elected by their peers for seminal contributions to engineering. The academy provides leadership and guidance to government on the application of engineering resources to social, economic and security problems. Established in 1964, the academy operates under the congressional charter granted to the National Academy of Sciences in 1863.

What Is the ‘4th Side’? END_OF_DOCUMENT_TOKEN_TO_BE_REPLACED