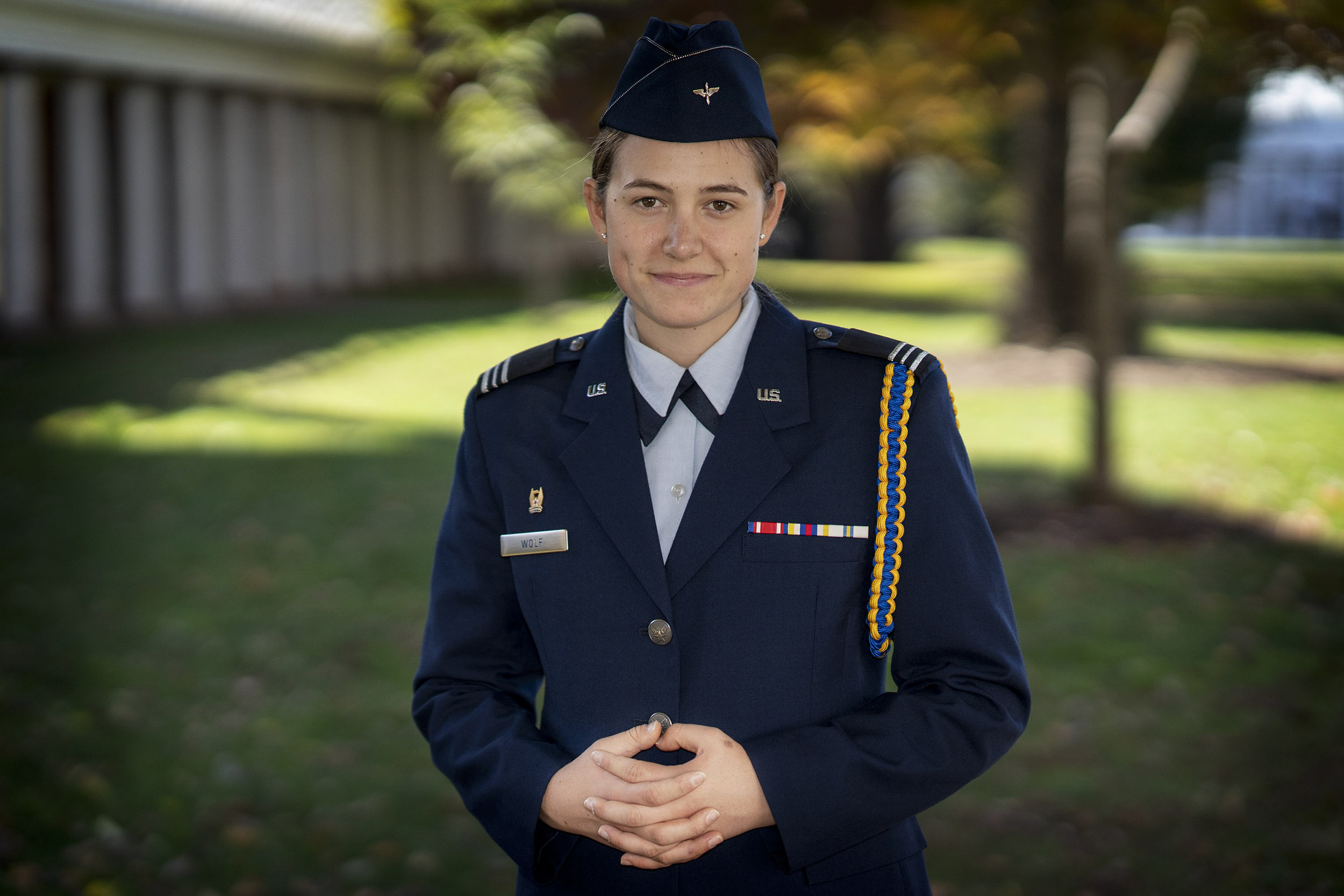 Student and Air Force ROTC Cadet Alma Wolf, a Colorado native, says UVA has provided her an opportunity to get outside of her comfort zone. (Photo by Dan Addison, University Communications)

Students on the verge of serving in the military are honoring those who paid a heavy price for their service.

The ROTC programs at the University of Virginia are conducting a 24-hour vigil to remember members of the United States armed forces who have been prisoners of war or who are missing in action. Cadets will march across the stage at the McIntire Amphitheater in shifts from 3:30 p.m. Monday to 3:30 p.m. Tuesday.

The vigil will be followed by a ceremony honoring POW/MIAs and veterans starting at 4 p.m. Retired U.S. Army Brig. Gen. Sandra Alvey is the guest speaker. The ceremony will include honor guards, a flag-folding ceremony, a 21-gun salute and the playing of “Taps.”

Air Force Cadet Maj. Alma Wolf will march two shifts during the vigil. From Durango, Colorado, Wolf, a third-year global studies major with a Russian minor, spoke with UVA Today about her reasons for marching and her time at UVA.

Q. What does participating in the vigil and ceremony mean to you as a cadet?

A. Many people have come before me and many people have given their lives so that we could sit here. People have sacrificed so much for our country. I am preparing to enter the military and it is important for me to recognize the people who have come before me and the people who have made it possible, especially the women who have pioneered being in the military. Honoring our veterans, the people who are prisoners of war and those missing in action with the vigil and the Veteran’s Day ceremony is a small thing we can do to recognize them for the sacrifices they have made. As a cadet, knowing this is something that I am going into, something that I may sacrifice for, I have empathy for those who have given so much.

Q. Why did you join Air Force ROTC?

A. I decided to pursue a commission to be an officer in the Air Force because I want to be part of something greater than myself and I want to serve. There are so many opportunities to protect the values that Americans hold dear and chances to give my time and energy to a cause that’s much greater than anything I can pursue individually.

The Air Force Academy is in Colorado, so when I was trying to decide which branch to go with ROTC, that was the most familiar. The Air Force is a different lifestyle that is really valuable and important.

Q. Why did you decide to attend UVA?

A. It is a great school. When I was accepted to the ROTC program, UVA was one of the schools I applied to. I wanted to be near Washington, D.C., because I wanted to study politics and government. The proximity to the capital is great. I also went to a small high school and I wanted to go to a big university so I would meet people from all different backgrounds and UVA has definitely provided that.

It has been such a change of culture from Colorado, a change of weather and the surroundings in every way. It has been an opportunity for me to get outside my comfort zone and do a lot of things that are unfamiliar and it has been really great.

Q. What have you enjoyed about your UVA experience?

A. The people have been a really big part of my time at UVA. I am in Chi Alpha, which is a Christian fellowship on Grounds, and I have met some amazing people through that.

Also, while UVA is a competitive school, I never felt like I was competing with my classmates. I have learned a lot. My professors are all really smart and come from great academic backgrounds. So I have enjoyed the people and I have enjoyed the academics.

I also love Charlottesville. It is a great college town in so many ways.

Another thing is the history of UVA and the traditions. I love the Lawn and historic elements. UVA is older than the state of Colorado. Virginia has so much history, and I really love history. Colorado is not as historically rich. Granted, there is a lot of cool stuff in the West, but my parents love to visit here because there are so many museums and monuments and Monticello, and we have nothing like that in Colorado.

Q. How is UVA different from what you are used to?

A. Culturally, I think that UVA is vastly different. People are a lot more driven here. They have big, grand plans for their lives, and these big goals.

And the people are very nice. That was the first thing I noticed when I got to UVA. It was almost like Southern hospitality was bleeding over into UVA.

And with the food, there are foods you guys eat in Virginia. All the dining halls serve grits. I never had grits before I came to UVA.

There are little things like that and then there is also the size. There were about 250 people in my charter high school. Where I grew up in Colorado, it is pretty rural and I was 30 minutes from a ski area. I had lots of trails and outdoor spaces all around, and while UVA definitely has trails and outdoor spaces, I am used to a lot more. I have not gone skiing here and I don’t intend to.

Q. Why did you major in global studies?

A. I entered college thinking I wanted to study politics and government. I have always been interested in the workings of our government, but I became more interested in international relations.

I am also interested in international law and international policy. We get to do a capstone thesis project where we will write about an issue of global security and justice. I think that is an important way to use my undergraduate time to study and then apply it to a problem in the world. We will see how well it translates to my career in the Air Force. But at least they are teaching me a lot of very valuable skills.

I think I want to pursue being a logistics and readiness officer or a missile operations officer, but I think of all the jobs to be in the Air Force, you should have an awareness of the world, what is going on in it, our relationships with other states and what it looks like to protect America’s security. It is also important to promote security and justice in the world. So on a broad scale, I think my major is very applicable to being an officer in the Air Force.

Q. Is this why you are studying Russian?

A. When I entered UVA, I wanted to study a language because I thought there would a lot of [language] resources here. I never studied Russian, but it is one of the languages the Department of Defense wants people to be able to speak and the Air Force wants its officers to speak if possible. It seemed interesting to me. I wanted to learn how to read Cyrillic.

I studied Russia in high school for my thesis and I have taken a lot of classes at UVA regarding Russia and Russian politics, so I want to be familiar with the language.

When Less Is More: How Harnessing the Power of Subtraction Can Add to Life END_OF_DOCUMENT_TOKEN_TO_BE_REPLACED