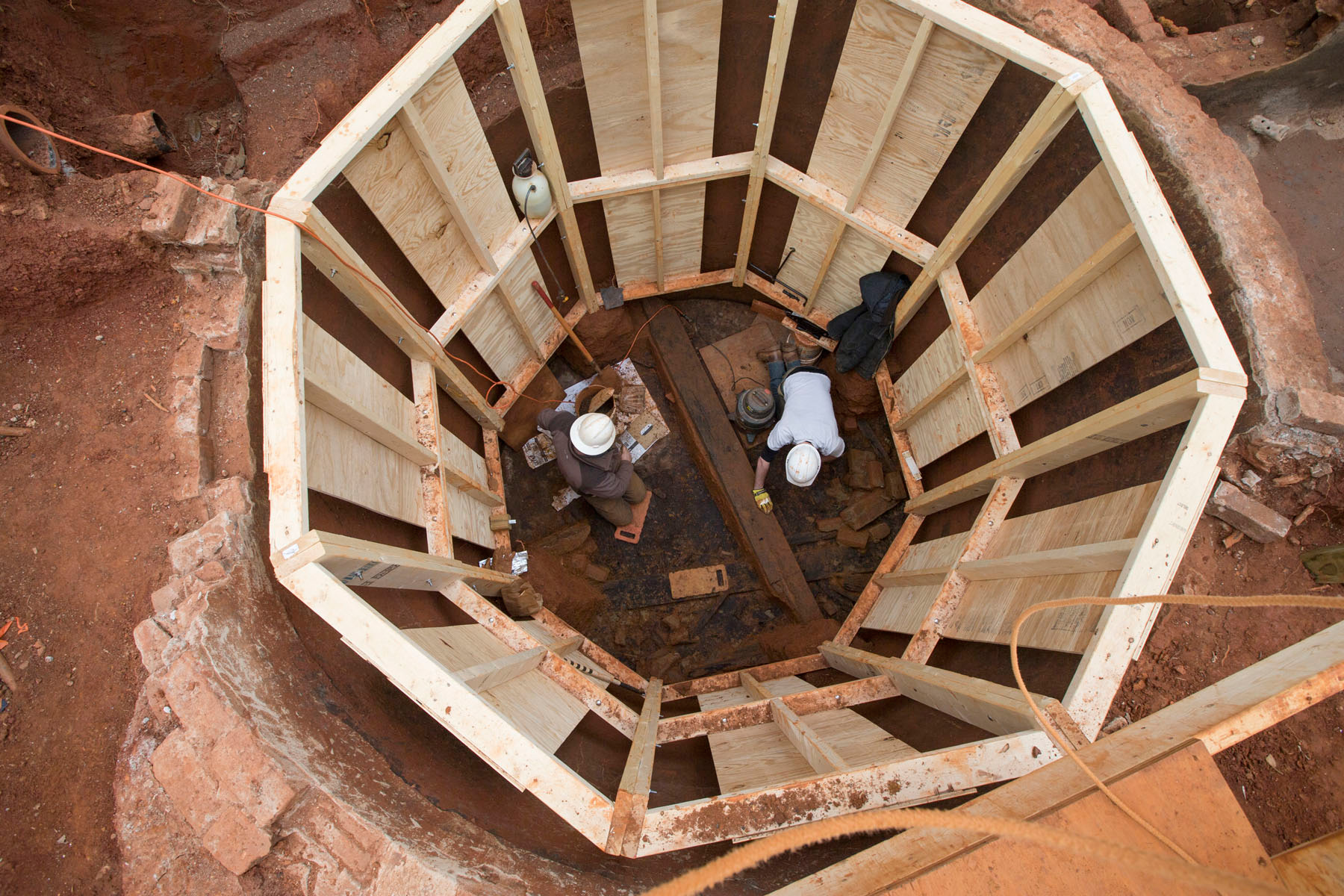 It’s fascinating what you can learn from a hole in the ground, or in this case, a hole in the Grounds. You unearth buried treasure that can recast history.

Archaeologists from Rivanna Archeology Services LLC have spent the past month at the University of Virginia excavating an 11-foot-deep cistern on the east side of the Rotunda, part of the original infrastructure of the center of the University. The work is being performed in anticipation of the start of the second phase of the Rotunda’s renovation, scheduled to take two years, beginning after Finals Weekend, to be held May 17-18. The renovations will include construction of an underground mechanical utility room beneath the east courtyard garden where the cistern is located.

“Like Monticello, the University was built on top of a hill and it was always an issue of getting water up to it,” Hogg said. “That is why the University bought Observatory Hill, because it was covered with springs. The cisterns were clearly there to provide supplemental water to what they could get from the springs.”

Hogg said it was possible some of the cistern water was used for drinking, some for fire protection and some for other purposes.

The archaeologists painstakingly excavated the cistern, a round, underground tank with a brick exterior lined with a layer of hydraulic cement, originally used to collect and store rainwater from the roofs of the Rotunda and the south wing. They sifted about four tons of red clay soil that had filled it for more than a century, finding shards of china, and a few pieces of quartz and rudimentary concrete used to pave the Lawn walkways in the 1880s. They are now gently exploring the ground around it, seeking a fuller understanding of life in and around the Rotunda in its early years. Members of the University community have been able to observe the excavation and exploration of the cistern from the terrace of the Rotunda or as they walk past the dig.

Based on University records, archaeologists had originally thought the cistern dated to the 1820s, when the Rotunda was first built. But by the time they had dug to the bottom of it, and made a more thorough search of records, a seed of doubt had been planted.

“I’ve begun to wonder whether the cistern isn’t one of three that were constructed in 1851, for which we have good written documentation,” said Steve Thompson of Rivanna Archeology Services and a U.Va. graduate. “Until we can find really solid documentary evidence that it was earlier, this seems a strong possibility.”

University proctor Arthur Brockenbrough wrote in 1828 that he “should like to put cisterns near the Rotunda to hold the rain Water that may be collected from its [roof?] & some in other places.”

In 1833, the Board of Visitors instructed the proctor to finish the cistern contiguous to the chemical laboratory, which was located in the lower east oval room of the Rotunda, but that appears not to have been done.

And 1837 plans for some work on the Rotunda showed only a single cistern at the Rotunda. When the University built an addition onto the north side of the Rotunda in the early 1850s, the need for water increased, so more cisterns were needed.

“Certainly, by 1853 the east courtyard cistern was fully functional, as records indicate it was the water supply for the new chemical lab in the basement of the Annex,” Thompson said. “It is also depicted on Pratt’s 1858 map, and that same year Pratt reported on redirecting roof runoff from the Rotunda wings into the cisterns ‘right and left of the Rotunda.’”

William Pratt was a civil engineer hired in 1855 by the Board of Visitors, later serving as the first superintendent of buildings and grounds from 1858 to 1865. (Before Pratt, the proctor had the responsibility from the Grounds.)

Part of the archaeology firm’s work in dating the cistern centered around a partial name, “W Brand,” found carved in the hydraulic cement inside the cistern.

“Chiles M. Brand was paid in 1851 for brickwork and plastering in all three ‘new’ cisterns,” Thompson said. “He would have been about 60 years old in 1851, according to census, and perhaps only served as the general contractor. In Chiles Brand’s household in 1850 was his 21-year-old son, William W. Brand. In 1860, William W. Brand was head of his own household, also a plasterer, and housing three apprentices, including free African-American George Kinney. I think there is a reasonably good chance that the cistern is 10 or 20 years later than we initially believed and William W. Brand plastered it and inscribed his name in the wet parging.”

William W. Brand continued to work as a plasterer into the late 19th century. He died in 1907 and is buried in Charlottesville’s Maplewood Cemetery, as are his parents, though their stones have been lost.

The archaeologists also found the name “Charles Carter” cut into the cistern’s parging, but so far they have been unable to track him.

The cisterns were decommissioned after the first Ragged Mountain Reservoir was completed and water lines were extended to the University.

“Minutes of the June 1886 meeting of the Board of Visitors record the recommendation of the Commission on Infirmary, Health, Sewers & Drainage ‘that the pumps & wells be closed & the denizens of the University be required to use the water now supplied from the hydrants connected with the new water supply,’” according to a Rivanna Archeological Services report.

The upper level of the old cistern was destroyed over the years as the gardens were landscaped and leveled following the 1895 fire, various drains were run through the garden and a fountain was built in the 1950s.

“There’s a lot of terra cotta running through here,” said archaeologist Ben Ford, a U.Va. alumnus, as he looked over the lines of pipes that crisscrossed the early stages of the excavation. Sections of these pipes, many of them no longer in use, were later removed to make the site more accessible.

While many of these pipes were more modern, Thompson said they have found at least two brick box drains that run under the courtyard garden. He believes these drains were connected to downspouts draining rainwater from the Rotunda roof. The brick tunnels are lined on three sides with hydraulic cement and the top layer of brick is removable for easier cleaning of the pipe.

Archaeologists also found a 6-foot-by-4-foot brick tank on the northeast side of the cistern, which may have been a holding tank for cleaner water drawn off the cistern. There is a perforated lead pipe apparently built through the west wall of the rectangular tank and extending toward the Annex. Thompson speculated that the perforations in the pipe are a crude form of screening to keep stones from blocking it.

There is a smaller rectangular brick box, attached to the rectangular box, several feet under ground, through which the lead pipe passed. There was a stopcock on the pipe at that point, so the water supply could be shut off.

Thompson said the cistern would have been covered, possibly with wood plank roofing, to keep things from falling into the water. Archaeologists found a plank at the bottom of the cistern that may have been part of a roof. He speculated that there was probably a cover over the rectangular tank as well.

The excavation also uncovered an oval-shaped brick manhole pipe that extended about five feet below the surface of the ground and gave workers access to the various drain pipes. Thompson estimated the shaft, which tapered out wider as it got deeper, was installed the first half of the 20th century.

“The cistern is very important to the history of the University [illustrating the] struggle to get fresh water” to Grounds, said Jody Lahendro, senior historic preservation architect with Facilities Management. “As a result of investigation of the cistern in the courtyard of Pavilion IV and this one, Rivanna Archeology is able to fit together a better picture of the steps taken to get fresh water to the University.”