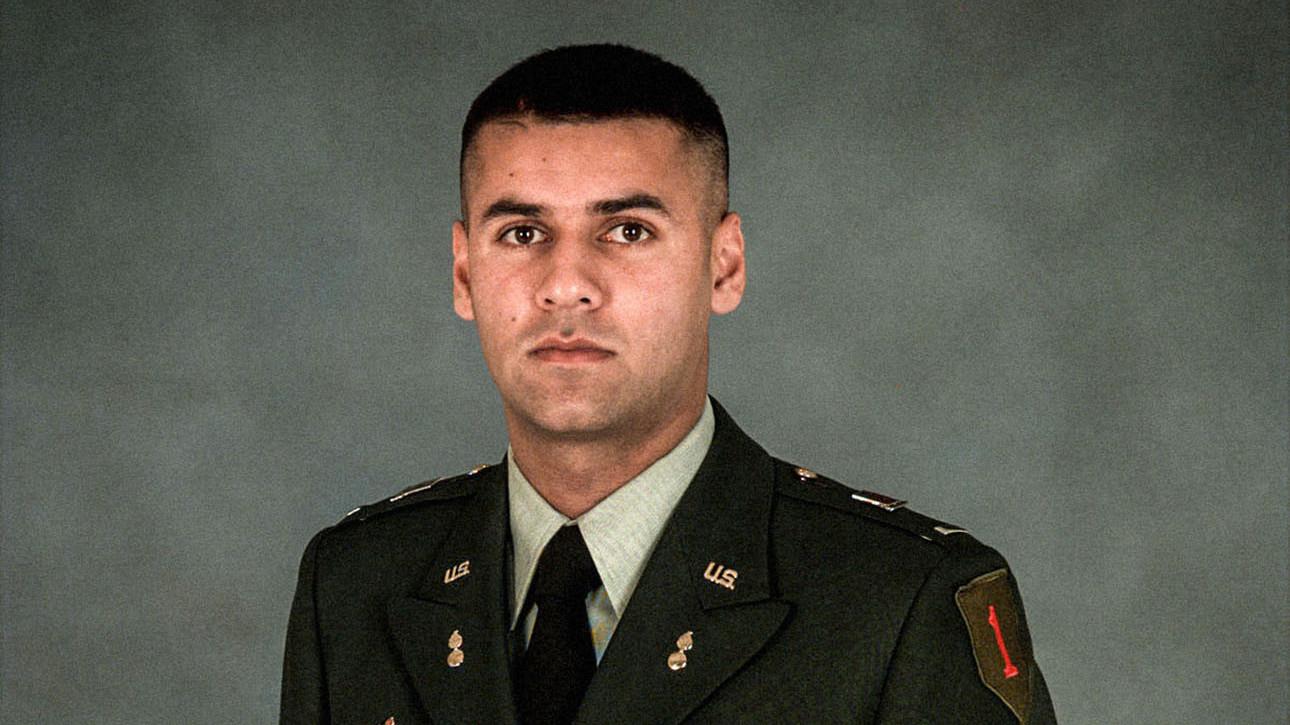 On the outside walls of the University of Virginia’s Rotunda are plaques honoring hundreds of alumni who were slain in the Civil War, World War I, World War II, the Korean War and the Vietnam War.

This spring, a new plaque will be dedicated in memory of the University’s lone alumnus killed in the Iraq War: U.S. Army Capt. Humayun S. Khan.

Khan, a 2000 graduate of UVA, was killed in Baqubah, Iraq, on June 8, 2004, when he stopped a taxi loaded with explosives at a checkpoint. Khan and two Iraqi civilians died when the driver detonated his cargo, but Khan prevented the bomber from entering a compound where a number of U.S. soldiers were eating breakfast.

“Humayun’s actions saved other lives,” Army Lt. Col. Hampton E. Hite said in 2004 at a memorial ceremony for Khan on Grounds. Hite was commandant of the UVA Army ROTC cadre at the time.

On Friday, the UVA Board of Visitors’ Buildings & Grounds Committee approved the installation of the new plaque. A dedication ceremony is scheduled for May 2.

Lt. Col. Mark Houston, the current commander of UVA’s Army ROTC program, described the plaque as “further recognition of the sacrifices that UVA graduates have made for their country. This is something to honor the fallen.”

Khizr Khan, Humayun Khan’s father, said he was pleasantly surprised by the news that his son will be honored.

“We brought a high school graduate to Mr. Jefferson’s University. and he turned into a patriot and a public servant,” he said. “He lived that tradition to his last breath.”

Khan and his wife, Ghazala, moved to Charlottesville from Bristow in 2005, shortly after their son’s death, to be near their two younger sons, who were both students at UVA then. The Khans became involved with the ROTC program, baking cookies for the cadets and inviting them to their house.

“For many years, the cadets would come to visit us and have dinner at our house,” Khizr Khan said. “For many, it was the first time they were in a Muslim-American home. They would tell us it looks just like their parents’ or their grandparents’ home.”

Khizr Khan said that because of their health and their schedules, he and his wife have had to cut back on these dinners. But one mainstay on their calendars is the annual joint commissioning ceremony for the three ROTC programs on Grounds, held during Finals Weekend, at which a fourth-year Army ROTC cadet is awarded the Capt. Humayun S.M. Khan Memorial Award.

The ROTC cadets remind the Khans of their lost son. “We wanted to be involved with the cadets because we felt the same as did Humayun: these are exceptional people, most honorable, caring, leaders of our nation and patriots – the best of the University,” Khizr Khan said. “It also reminded us of our son. In each and every one, we see a reflection of Capt. Humayun Khan.”

Stacie Holzgrefe, a 2000 foreign affairs graduate and Humayun Khan’s Army ROTC classmate, and remembers him as being a serious student with a sense of humor once you got to know him.

“He was always even-tempered and mature beyond his years,” Holzgrefe said. “He was very good at conflict resolution, and he could maintain a balance between being a student and being a cadet.”

She said he had a wonderful ability to make others feel welcome and happy.

Maj. James Holzgrefe, Stacie Holzgrefe’s husband, who graduated from UVA in 2000 with a master’s degree in civil engineering,  described Khan as “very calm. He knew how to relate positively to people.”

James Holzgrefe and Khan were residents of Hereford College, where he said Khan would play soccer with the children of Daniel Bluestone, then the principal of the college.

Bluestone, now a professor of the history of art and architecture at Boston University, called Khan “a model citizen,” and said the cadet used to run with Bluestone’s son, Hal, who was around 8 years old at the time, moderating his pace so the youngster could keep up. Bluestone said Khan talked then about becoming a lawyer, part of the military’s Judge Advocate General Corps, and he believes this influenced Hal, who recently passed the bar in California.

“He was an incredible member of the community at Hereford,” Bluestone said. “You knew he was someone who was going to be a friend for life.”

Bluestone said a sourwood tree was planted at Hereford College in Khan’s memory. “It has bright summer foliage, which is a reminder of Khan,” he said.

James Holzgrefe remembered Khan, a psychology major, as a serious student, but said that he had a fun side.

The Holzgrefes, who stayed in contact with Khan through several group emails following graduation, learned of Khan’s death when they returned from a family trip.

“There were several voicemails on the answering machine and the funeral was the next day,” she said. “We were just shocked. We just heard that he had been killed in action; there were no details. He was the first person we had known who was killed in combat.”

James Holzgrefe said there is a loose network of Humayun Khan’s friends who stay in contact with one another and with the Khans, as do subsequent Army cadets who have been at UVA.

“We have heard and continue to hear from his classmates, in the military and out of the military,” Khizr Khan said. “They share their family photos and news of other events in their lives to stay connected as family members do. They all are our family.”

The plaque for the Iraq War fallen is being donated by the Seven Society, as were the other memorial plaques. University Historian Alexander “Sandy” Gilliam said he was contacted by the Seven Society to act as an intermediary in the process, which he said started several years ago, but was put on hold during the extensive Rotunda renovations.

Stacie Holgrefe said it was appropriate that Khan will be remembered at the Rotunda.

“He loved UVA,” she said. “Of all the honors that could have been bestowed, this would mean the most to him.”

Monkeypox Is Spreading, But University’s Risk Believed To Be Low END_OF_DOCUMENT_TOKEN_TO_BE_REPLACED

Q&A: Assessing the Risks and Rewards of Pelosi’s Plan to Visit Taiwan END_OF_DOCUMENT_TOKEN_TO_BE_REPLACED

These Giant Wind Turbines, Inspired by Palm Trees, May Be the Future of Renewable Energy END_OF_DOCUMENT_TOKEN_TO_BE_REPLACED