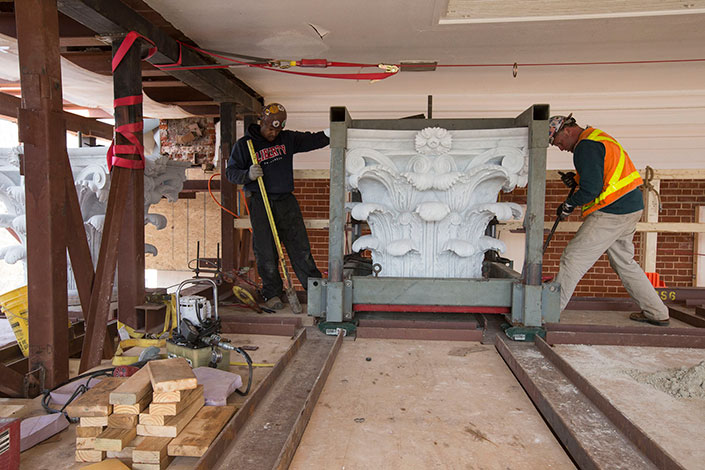 The installation of the capitals on the south portico of the University of Virginia’s iconic Rotunda has gone very smoothly.

“We had six weeks set aside and they did it in half the time,” Senior Historic Preservation Project Manager Jody Lahendro said of contactors Rugo Stone LLC of Lorton. “We had four weeks planned to remove the old capitals and they were able to do that quickly, too.”

Craftsmen in Carrara, Italy carved the new capitals. Carrara was also the source of the original capitals commissioned by University founder Thomas Jefferson, which were destroyed in an 1895 fire that heavily damaged the Rotunda. After the fire, New York architect Stanford White, enlisted to rebuild the Rotunda, ordered new capitals made from domestic marble.

One day in 2009, Historic Preservation Project Manager James Zehmer and Mark Kutney, conservator in the Office of the Architect for the University, were walking under the south portico when they noticed a small pile of what appeared to be sand. On investigation, it turned out to be a piece of one of the capitals that had dropped the 23-foot height of the pillars and shattered upon impact. Further inspection revealed that the capitals were beyond repair, and they were wrapped in black hardware cloth to keep any more pieces from falling off while officials mapped a new course of action.

The new capitals are recreations of the Jeffersonian capitals, with craftsmen from Pedrini’s Sculpture Studio of Carrara making laser scans of the surviving bottom half of an original capital, along with several smaller pieces that were preserved. They combined the scans with sketches and photos of the originals to create templates for the new columns.

A computer-controlled lathe carved the first 90 percent out of huge blocks of marble, and skilled craftsmen handled the intricate finish work.

“They are fantastic, beautiful, stunning,” Lahendro said. “At one point, we had an old and new capital sitting next to each other on the ground, and the differences between the two were shocking – not just their condition, but also the accuracy and level of detail in the carving.”

Workers assembled two structures to move the capitals: shoring to support the roof of the portico and a track system to move the capitals. The old capitals were carefully removed, starting with the northeast corner. Workers erected a metal cage around each capital and rolled it out of position along the track and out to a platform, where a crane lifted it out. Once all the old capitals were removed, the new ones – each weighing about 6,300 pounds – were installed, in reverse order.

With the new capitals in place on the south portico, crews plan to complete work on the portico roof and sheet metal ornament. Installation of shoring has already begun at the north portico, where the six capitals on that side are scheduled to be replaced this summer.

Meanwhile, workers have completed excavation for an underground vault in the east courtyard garden that will house the mechanical systems for the Rotunda, and have started pouring the footings for the vault’s walls. The underground room also will provide staging space for caterers in support of events in the building.

While excavating in the Lower East and West Oval Rooms, workers found original footings that supported wooden pillars that supported the floors above. According to Lahendro, historians suspected that the pillars had been there from an early 19th century documentary reference, but the footings were the first physical proof of the supports.

Workers also found 8-inch-square brick tunnels underneath both oval rooms that date to the Stanford White work on the building. The tunnels probably enclosed hot water pipes to radiators in the building, Lahendro said. Rivanna Archaeological Services mapped the pillar footings, tunnels and other historic underground features, as it had done with the cistern uncovered beneath the east garden courtyard as renovations began.

While digging in the east courtyard, workers also found remnants of a brick walkway that extended around the curve of the barrel of the Rotunda to the Rotunda Annex, an addition built in the 1850s and destroyed in the 1895 fire.

“We knew it had been there because we have post-fire photos of it,” Lahendro said.

On the north side of the building, crews excavating utility tunnels found some of the foundations of the Annex, which extended north from the Rotunda to what is now University Avenue. The annex contained four floors of offices, classrooms, labs and an auditorium.

Jefferson’s Rotunda design included the southern wings on the building, originally open spaces that later were enclosed for classrooms and a chapel. Following the 1895 fire, when the north wings were added, all four wings were constructed as open classrooms.

When the library moved from the Rotunda to the newly completed Alderman Library in 1938, Rotunda renovations – presided over by the late School of Architecture professor Stanislaw Makeilski – converted the wings into office space. Makeilski also oversaw the replacement of McKim, Mead & White’s deteriorated concrete portico steps and terrace balustrades with sturdier marble. Today, workers are replacing the leaky concrete base of the north portico steps; the marble steps have been stored and will later be reinstalled.

The primary programmatic objective of the renovations is to expand the student use of the building. This includes adding three permanent classrooms in the southeast wing and Lower West Oval Room and refitting other rooms for multi-purpose use. The Dome Room is also being configured by opening, for the first time, the lower gallery as a study and work space.

It’s Copperhead Season in Virginia. Here Is What You Need to Know END_OF_DOCUMENT_TOKEN_TO_BE_REPLACED

What’s Next for UVA’s Class of 2022? END_OF_DOCUMENT_TOKEN_TO_BE_REPLACED