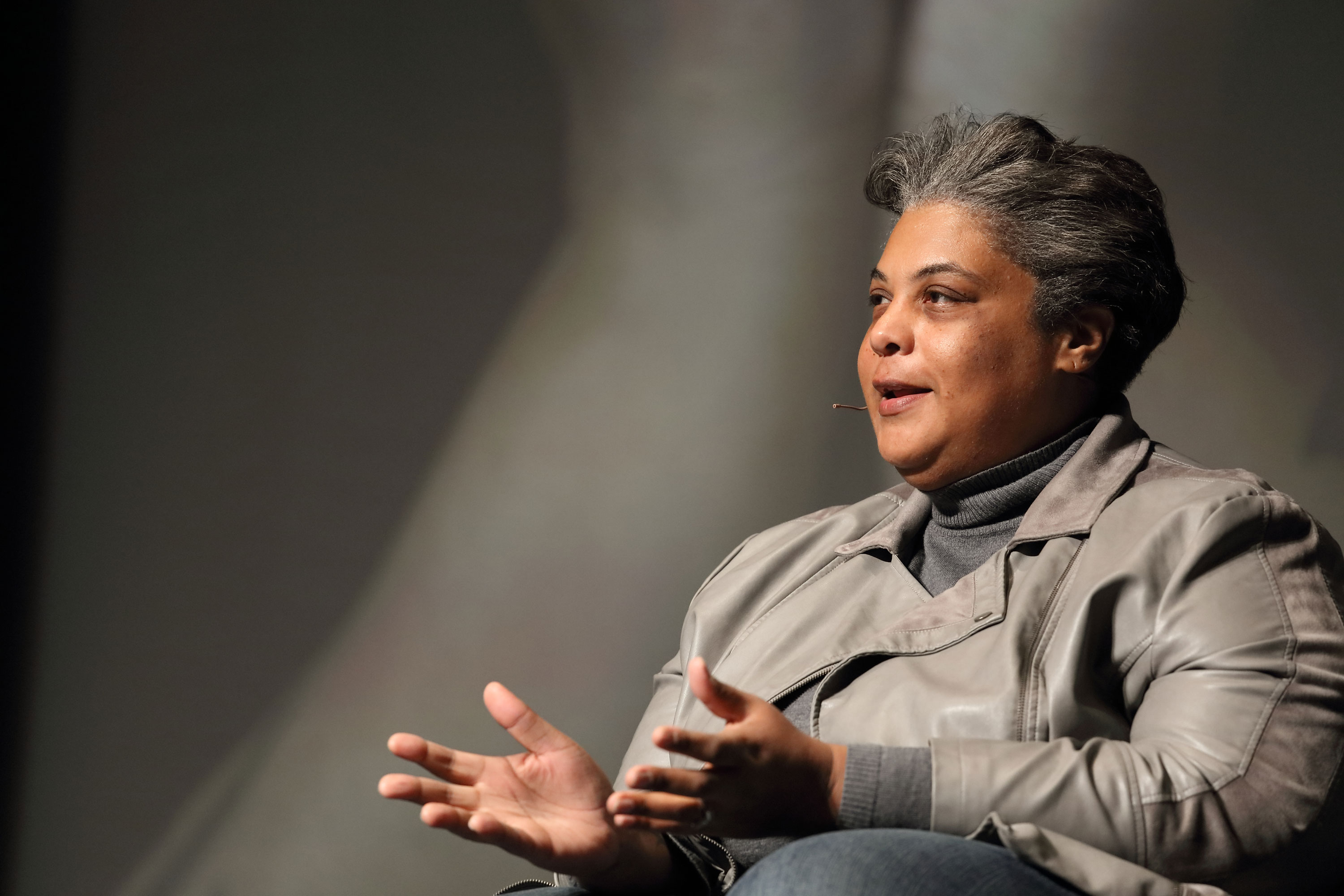 Author and cultural critic Roxane Gay spoke Thursday night to a full house at the Paramount Theater about “the age of inelasticity” and how that makes it difficult to create a global community.

The keynote speaker for the University of Virginia’s 2020 Community MLK Celebration, Gay took a casual approach, sitting in a comfortable chair on stage, yet delivered the honest, witty, on-point commentary for which she is known in her writing.

Critics praised her 2017 book, “Hunger: A Memoir of (My) Body,” as “an amazing achievement” and “a memoir that’s so brave, so raw, it feels as if she’s entrusting you with her soul.” She also published The New York Times best-selling collection of essays, “Bad Feminist,” in 2014, as well as the novel, “An Untamed State,” and short stories.

At the Paramount, Gay split her time into reading two short essays and holding a question-and-answer session with the audience. Even though she read her work, she didn’t sound like she was giving a lecture; her clear and casual style made it feel like she was having a conversation. The crowd chuckled as she read the first piece about having an unpleasant experience with “edibles,” marijuana-laced chocolates, legal in California, and then got more serious, saying she was there “to talk about what we can all do to make a difference,” sharing a piece she called “The Age of Inelasticity.” 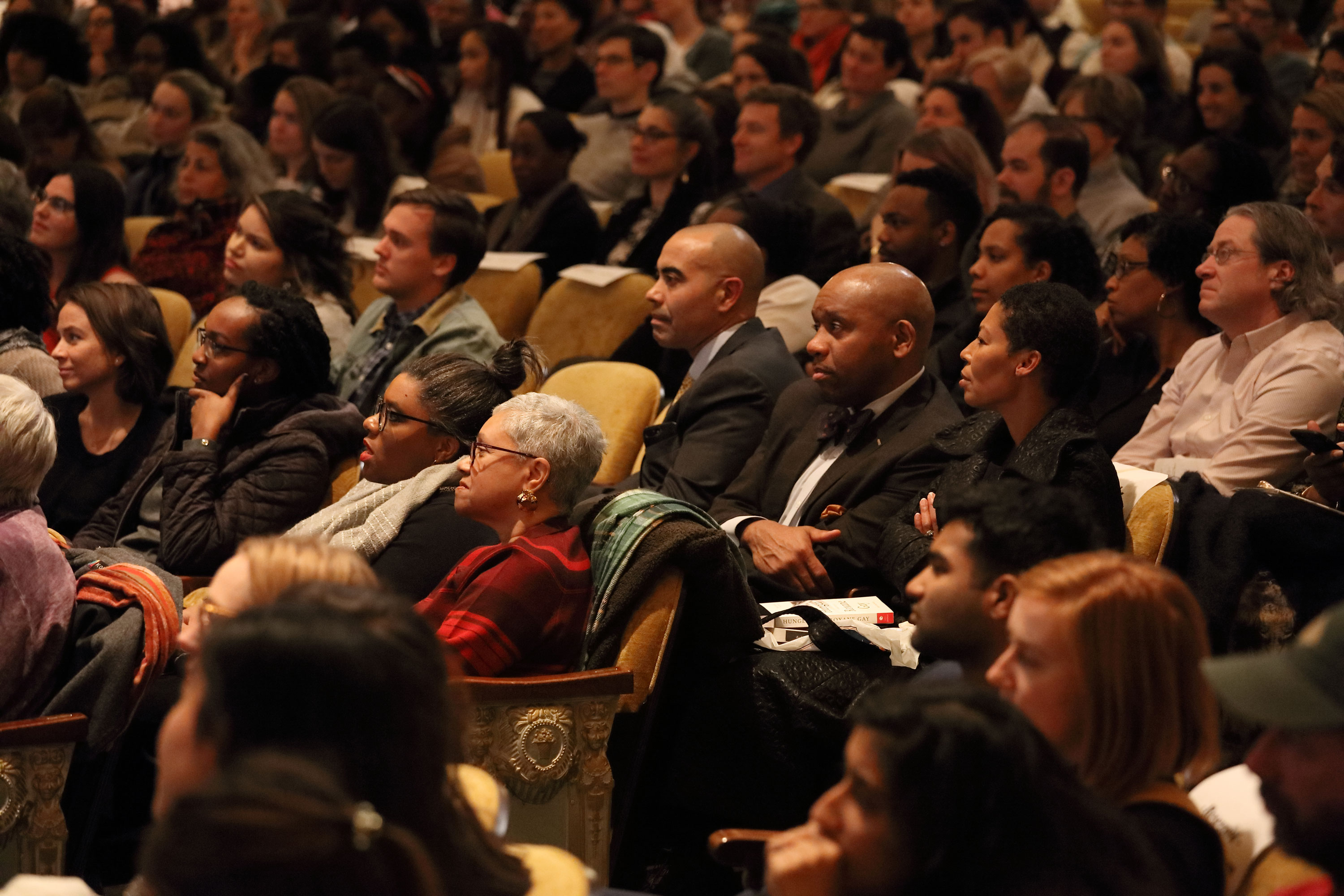 Proclaiming that she’s deeply opinionated, with deeply held beliefs – “even my opinions have opinions” – and has liberal views on a long list of today’s issues, from women’s rights to racism to universal health care, she called herself “a realist who longs for utopia, or at least a better way to live as a global community.”

Since the 2016 election, we seem to be living in “an age of inelasticity, and if we’re not careful, we’ll break,” she said, referring to people refusing to consider differing points of view.

“How do we find a middle ground – without violence?” she asked, saying we have to figure out how to compromise in an era of such rigid political divisions.

Even with a more refined communal sense about what views are acceptable and unacceptable, having to call for common decency in how we treat each other is a pretty low bar of expectations, she quipped.

“We have to take the time to stop screaming and start listening,” she said.

When we talk about rights, we should also include responsibilities. We need to find ways to hold each other and our leaders accountable, she said. People want to hear someone who has made a mistake or done something wrong at the very least acknowledge the truth. Then they should be willing to face the consequences and take some restorative or improving action.

When it comes to the 2020 elections, Gay advised that voters should look for the best candidates who show they are willing to be held accountable.

Taking audience questions about a number of topics, including how to improve communicating with others, she was honest in saying “I don’t know” sometimes, while offering possible approaches. It’s also all right to be unwavering about some things, she pointed out.

When it comes to having difficult conversations, she suggested choosing to talk with people who seem the most open to being reached. “If it’s someone who thinks I don’t have a right to exist, we’re probably not going to find common ground,” she said.

A creative writing professor at universities including Yale and Purdue, she said she considers her students reachable. She leaves her politics out of the classroom, but because she “embodies herself,” students can figure out where she stands. She doesn’t try to change their views, but seeks to teach them how to communicate better, to think and argue better – and then they might just reconsider their views, she said.

“I approach them respectfully and demand respect from them,” she said.

To a teenager in the audience, grappling with coming out as gay, she reassured him that with time, his family could become more accepting, but it was OK for him to establish boundaries and communicate why some views are hurtful.

She offered an example from her own experience with being overweight, which her mother would bring up regularly in their phone conversations. Gay, who explored the issue in “Hunger,” said it wasn’t until she was 40 years old that she told her mother she would hang up if she brought up the topic again. It took a few weeks of doing that before her mother got the message. Now engaged to a woman, Gay said her family has opened up to accept her.

When asked if she has seen any changes as she travels around the country to give talks, she answered, “Things are not getting better. The reality is we come together for these special events – and they’re great – but how do we sustain the energy to keep working on issues?”

She said one positive change she sees is that people who were previously complacent are becoming more engaged. She also mentioned young people getting more involved in dealing with problems like climate change, for one example.

“We don’t all have to be Greta Thunberg,” she said. “If everyone asks, ‘What can I do?,’ we can take small steps that are good in many different ways.

“We need to become more flexible. … Things won’t get better until everyone is willing to compromise.”

Presented by UVA’s Division for Diversity, Equity and Inclusion and other partners, Gay’s appearance is among a range of events being held over the latter half of January that UVA and the community are presenting for the annual celebration of the legacy of the Rev. Martin Luther King Jr.