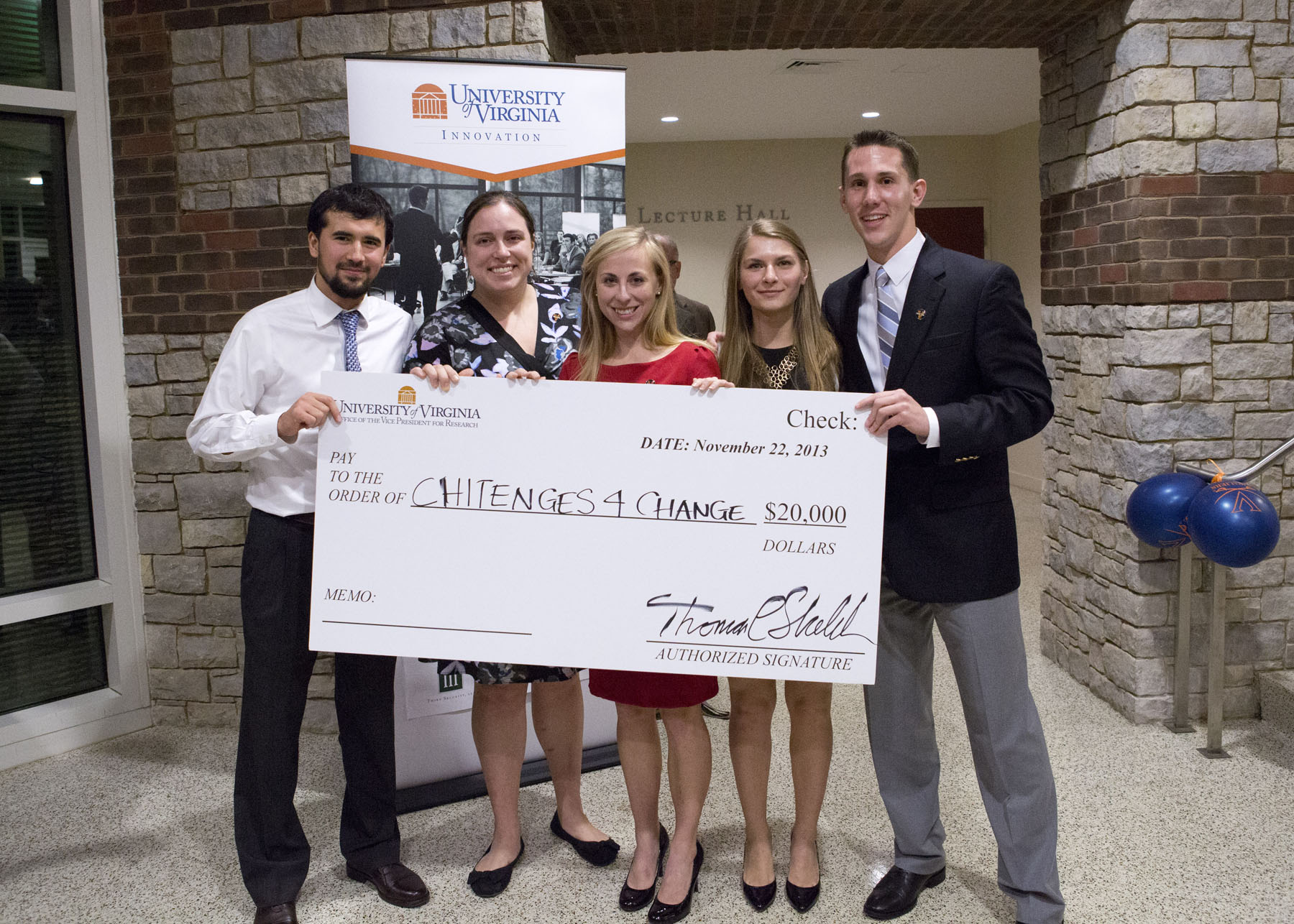 Four student teams divvied up $40,000 in prize money Friday at the University of Virginia Entrepreneurship Cup – three of them for plans that could improve the health of millions of people.

The $20,000 first-place check went to the “Chitenges 4 Change” team for its plan to tackle a public health issue affecting almost half a billion women in the developing world who have incomes of less than $1.25 per day. For these women at the bottom of the global income pyramid, disposable sanitary pads or tampons are far too costly to use regularly, team member Jennifer Casto said. Casto and her four teammates are all students in the Batten School of Leadership and Public Policy’s master of public policy program.

The issue forces women to regularly miss school and work, said Casto, who observed this while teaching English in Zambia for four years in the Peace Corps. Some Zambian women turn to rags, bags, mud or other homemade solutions that lead to health problems, including infections and cervical cancer.

“When a girl doesn’t have access to sanitary pads, her health, education and economic status are all negatively affected, simply because she has periods,” Casto said.

The team’s solution is washable, reusable sanitary pads made of 100-percent cotton from locally sourced fabric used to make chitenges, colorful African garments similar to sarongs, explained team member Bailey Morton. Soft and comfortable, these “Chitenges 4 Change” feature button wings to secure them in place and an inner lining pad made of six layers of highly absorbent cotton flannel fabric that can be removed and washed.

A reusable three-pack of the pads should cost about $1.50 and last a woman for one year, replacing the need for 180 disposable pads costing $54, Morton said. In Zambia, where 60 percent of the population lives on less than $1 per day, this cost differential will be “life-changing” for more than 2 million girls and women between the ages of 14 and 54, Morton said. Globally, roughly 420 million women face the same challenges.

The group plans to launch the product in Zambia, producing the pads by partnering with Zambian tailoring schools. They will distribute them via local women’s groups, a peer-to-peer marketing model used in many developing countries, team member Ilgiz Saubanov explained.

“Nobody is thinking about the bottom of the income pyramid,” Saubanov said in closing the presentation. “Men are running the businesses, and this is a taboo issue. Nobody is thinking of market-based solutions to address this, and it’s a pretty simple solution.”

“You guys are tackling an important subject,” said event judge Adam Healey, a co-founder of three successful Internet companies, including Borrowed & Blue, an online wedding resource. “Thank you for that.”

“We all knew this was a problem because we all have lived overseas,” Morton explained after the winners were announced, noting that three of the team members had worked overseas in the Peace Corps.

“The E-Cup brought us together and made us think about this in a business context,” team member Alex Dumitriu said.

At the award ceremony, Thomas C. Skalak, U.Va. vice president for research, said, “As a university, we really only have three jobs: educating students, creating new knowledge and moving knowledge into the world where it can make a difference for people. That’s what innovation is all about, and that’s what the E-Cup is all about. This is one of the most meaningful things that we do.”

Skalak also noted that this year, five of the nine finalist teams drew students from more than one school or department. “In politics, they call that multilateral collaboration. Everyone is looking outside their own labs and classrooms to build a team that suits the problem and get the job done.”

The $10,000 second-place check was awarded to the Notivibe team for its vision of a wireless monitoring and reminder system to enhance hand-washing compliance among health care professionals, who would wear a vibrating wristband that alerts them if they enter a patient zone, such as an infant incubator, without first stopping at a hand sanitizer station.

The Notivibe system addresses one of health care’s biggest challenges: decreasing the risk of hospital-acquired infections, which can have life-or-death consequences for premature infants, because they don’t have a developed immune system, explained Yiqi Cao, one of nine biomedical engineering majors on the team.

Under the Affordable Care Act, starting in 2015, hospitals will be required to publish their rates of hospital-acquired infections and to absorb any health care costs they cause.On average, such infections extend a hospital stay by 19 days and cost an additional $66,000 per case in the U.Va. Medical Center’s neonatal intensive care unit, according to the team’s estimates, Cao said.

“The goal of Notivibe is to work with health care workers,” said James Cooney, a mechanical engineering major. “These people go to work every day to save infants’ lives. They want to do their jobs. They want to wash their hands. The problem is they’re human. They forget sometimes.

“From watching the NICU, 100 percent of the time they wash their hands the first time they deal with a given infant. The problem is, while doing a procedure, they’re coming in and out of that zone, they’re typing notes on the keyboard, they subconsciously put their hand in their pocket. It’s these little things that they do as they are so focused on their job, that they forget, and that’s what we’re there to catch.”

The team first began working on this issue after Dr. David Kaufmann, associate professor of pediatrics, asked a class in the School of Engineering and Applied Science to help brainstorm solutions to some of the challenges in the U.Va. Medical Center’s neonatal intensive care unit.

The team would like to prove the Notivibe system’s effectiveness with a one-year trial involving 18 beds at the U.Va. hospital, with the goal of reducing the infection rate by 50 percent.

“Sometimes, the most ingenious ideas seem like the most obvious, and this is one of those,” Healey said in response to the team’s presentation.

Two other teams each won $5,000 checks for honorable mention.

Minicell Therapeutics, a team of 13 students representing three schools and eight majors – the largest team ever in the finals of the E-Cup – won $5,000 for its bioengineered, nanotechnology-based treatment delivery system that promises to optimize cancer treatment. The minicells are a modular nanoparticle platform that could serve as a delivery chassis for many medical purposes, from antibiotics and vaccines to biosensors or imaging agents, explained Shaun Moshasha, a graduate student in the McIntire School of Commerce, who was part of the PhageFlag team that won last year’s E-Cup with a diagnostic test for whooping cough. The Minicell team will first focus on optimizing the delivery of chemotherapy treatment for acute myeloid leukemia, because the genes and antigens involved have been identified and are well understood.

The other $5,000 check went to Sarah Sanchez and Anika Brown, both students at the Darden School of Business, for their LAMARCA concept. They aim to produce crowd-funded small batches of premium fashion items, such as handbags. Each design offered must receive a target threshold of purchase commitments, as few as 25 commitments, to be produced, much like a Kickstarter campaign, empowering customers to back the products they like.

“As consumers, we are no longer satisfied with name brands,” Sanchez said. “Unique is the new standard of luxury,” and LAMARCA’s small production runs will guarantee exclusivity. By tapping young up-and-coming designers, and producing the goods in the U.S., the quality will match offerings from top luxury brands, but at a fraction of the price.

Reflecting on the fifth annual E-Cup, Mark Crowell, executive director of U.Va. Innovation, said, “This is an incredible event, and I thought today was the strongest field ever.”