Say It With Light: Using LEDs to Move Data Faster 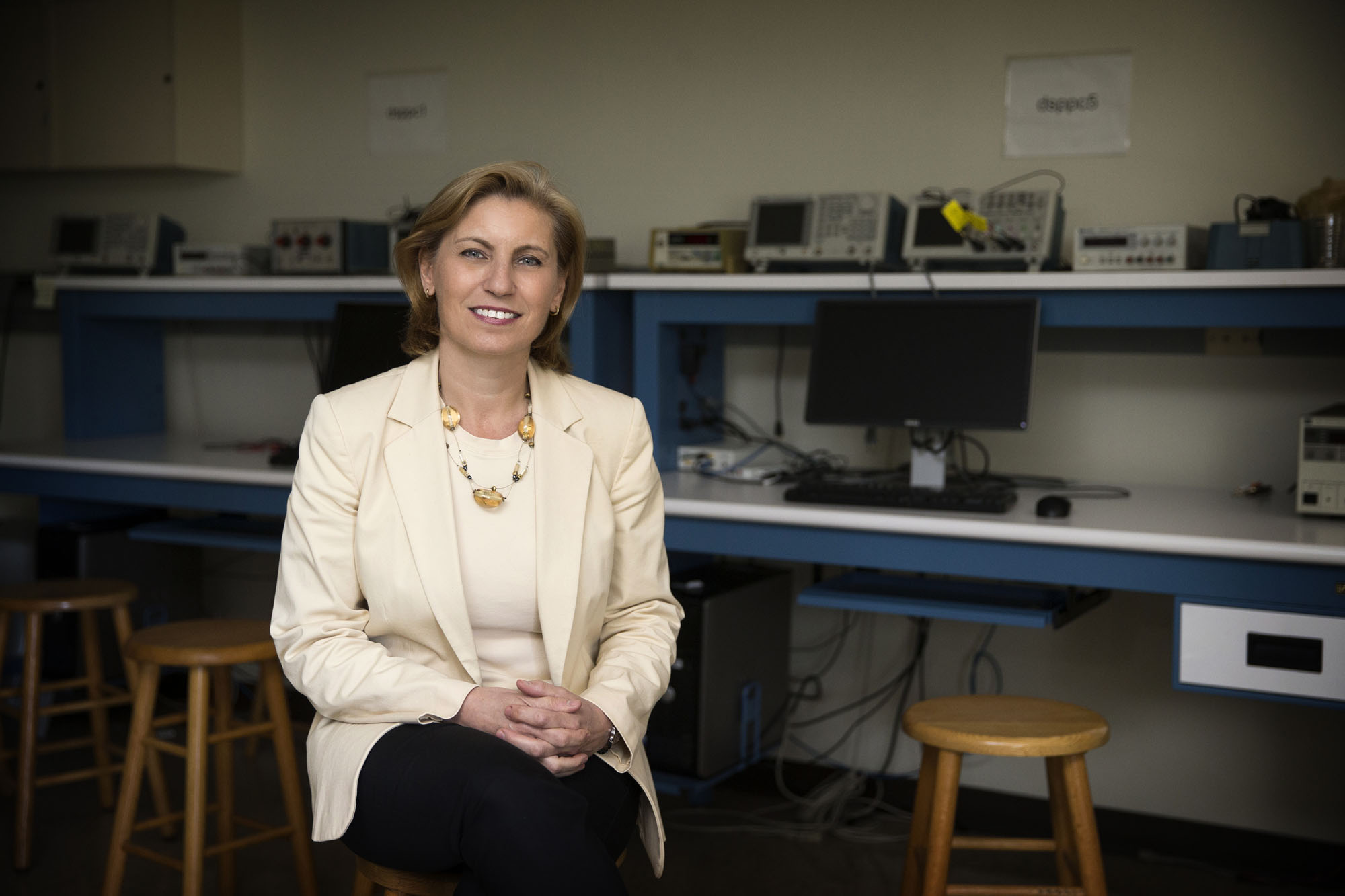 It’s like using fiber optics to communicate – only without the fiber.

Imagine connecting to the Internet through the same room lights that brighten your day. A University of Virginia engineering professor and her former graduate student are already there.

Maite Brandt-Pearce, a professor in the Charles L. Brown Department of Electrical and Computer Engineering, and Mohammad Noshad, now a postdoctoral fellow in the Electrical Engineering Department at Harvard University, have devised a way of using light waves from light-emitting diode fixtures to carry signals to wireless devices at 300 megabits per second from each light. It’s like having a whole wi-fi system all to yourself; using light waves, there would be more network access points than with radio waves, so less sharing of the wireless network.

“We developed a modulation algorithm that increases the throughput of data in [visible light communications],” Brandt-Pearce said. “We can transmit more data without using any additional energy. As more light fixtures get replaced with LED lights, you can have different access points to the same network.”

Their breakthrough means that data can be transmitted faster with light waves using no more energy than is already required to run the lights.

Noshad, 29, from Iran, started working with Brandt-Pearce on wireless optical communications in spring 2011 when he joined the electrical engineering department to pursue his Ph.D. He received several prizes for his work and earned his doctoral degree from U.Va. in 2013.

“We came up with the idea together, we wrote the research papers together, and so it makes sense that we wanted the names of both professor and student on the patent,” Brandt-Pearce said.

Noshad and Brandt-Pearce have filed a patent – along with the University – on their idea and Noshad has created a company, VLNComm, for Visible Light Network Communications, to which Brandt-Pearce is a consultant. The Charlottesville-based firm is developing a prototype for potential investors – a desk lamp that provides an Internet connection through light – and conducting further research.

Jie Lian, another one of Brandt-Pearce’s graduate students who has finished his master’s degree in electrical engineering and is working toward a Ph.D., is focusing his research on multiuser systems, getting several lights to cooperate to send data to many users in a room, making sure the lighting is good and everybody has a good connection.

“We have a patent with the University and we will file more patents on the research being done now,” Noshad said. “We can make different products, such as a large LED panel for shopping centers, airports and conference rooms. And we can build LED bulbs for use in the home.”

He said it would be a matter of simply adding software to computers to connect them with LED transmitters.

“This is not a replacement for wi-fi; it’s an augmentation,” Brandt-Pearce said. “Researchers have called it ‘Li-Fi’. Our modulation can be used in any optical device so this has the potential for widespread use and much better access than present wi-fi based on radio waves.”

The firm, which has been in business since last year, employs about four people and Fraidoon Hovaizi, an early investor, is president of the operation.

VLNComm has drawn attention from venture capitalists and has gotten some funding from a federal Small Business Innovation Research program through the federal Department of Energy. Noshad said the firm has gotten additional funding from the National Science Foundation and he thinks there may be more DOE funding for it in the near future.

“The idea in this technology is to transmit the data using the lighting systems that are already used for the illumination of indoor environments,” Noshad said. “[Visible light communications] offer a compact, dual-use, energy-saving solution and can provide a high-speed secure network connection for a large number of users.”

Part of its value is in its versatility.

“You can use it any place that has lighting,” Brandt-Pearce said. “In a stadium, in a parking lot, or from vehicle to vehicle if using LED headlights and taillights.”

Like current wireless communications, encryption is necessary to keep data secure, but Brandt-Pearce noted that a secure network could be created in a room with no windows.

“It can’t be detected outside the room because the light waves stop when they hit something opaque, such as a wall,” she said. “That can keep communications secure from room to room.”

And two separate networks in different rooms would not interfere with each other the way they do with present wi-fi networks.

She said devices with LED circuits in them can also communicate with each other.

“Your alarm clock can communicate with your coffee maker that it is time to start making the coffee,” she said. “Anything with an LED can talk to anything else with an LED. You don’t need a separate transmitter because you are not using radio waves.”

And because it does not use radio waves, this system can be used in places where radio waves could create problems, such as in hospitals, in manufacturing facilities and in airplane cabins.

“[Visible light communications] has the potential to significantly increase the speed of Internet connection in multiuser indoor environments due to the broad bandwidth of the visible light,” Noshad said. “It will offer a huge energy saving for the nation since energy is already used for lighting, and thus does not need to be expended for communications.”

Noshad said that some experts have forecast the LED communications market at $6 billion by 2020.

“There are people working on it in Asia and Europe,” he said. “I believe this is going to be a big market.”

Brandt-Pearce, who has taught at U.Va.’s School of Engineering and Applied Science for 22 years, said the visible light communications project is one of about four or five on which she is working simultaneously. Others include determining how much data can be pushed through an optical fiber and how to design long-haul fiber-optic networks so the data quality stays high while the data throughput is increased.

“I like that each day is different and that there are different projects to work on,” she said. “I love my job because I am having fun doing it, and still making a difference in people’s lives.”