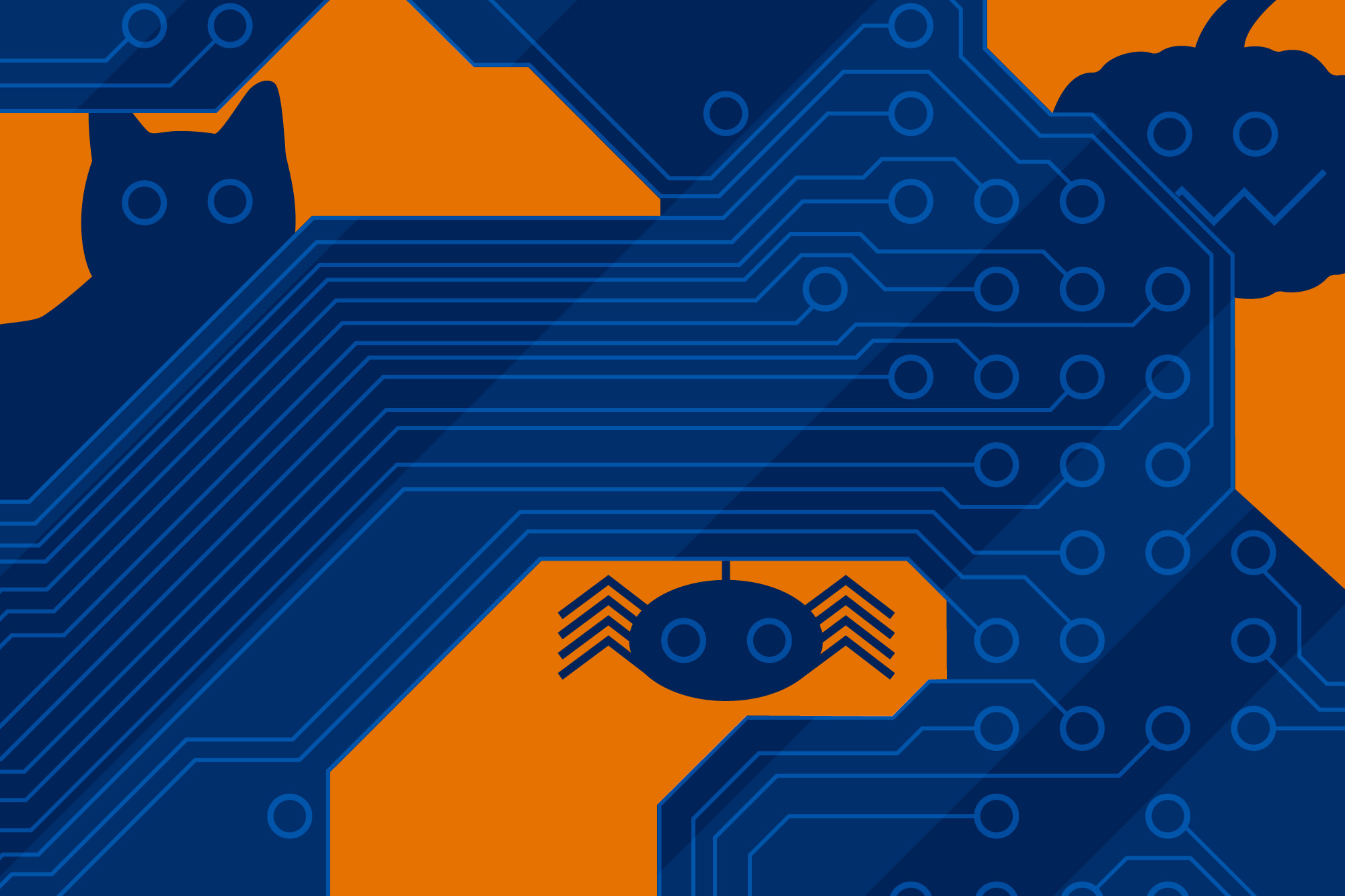 Reid Bailey’s voice boomed out over the clatter of energetic local youths as he organized them into teams – some who would be cutting foam panels, and the rest to brainstorm ideas for a haunted house.

Bailey, a University of Virginia systems and information engineering professor, is leading a summer camp operated by Computers4Kids, a Charlottesville non-profit offering underserved youths one-on-one and group mentoring, plus opportunities in science, technology, engineering, arts and math. Their summer project: designing a room in an annual student-run Halloween haunted house. About 18 youths, 12 to 18 years old, from the local community are participating in the two-week camp.

“The kids in the camp are going to design a haunted house that has sensors and technology and all this kind of stuff that they can do with C4K,” Bailey said, referring to Computers4Kids by its nickname.

“C4K has been great. It has worked with Brown Residential College, where every Halloween they put on a haunted house there in a big tent and they call it ‘Hauntings on the Hill.’ So we are working with them and they have given us some space in their haunted house that will be the room designed by these kids in the summer camp.”

Bailey has been involved with Computers4Kids for several years, recruiting his engineering students as mentors and involving club members in previous summer camps he has operated. Last year’s camp focused on smart houses, in which technology controls and coordinates the house’s systems.

“I like the idea of integrating architectural design and thinking about space and using these kinds of sensors and technology,” Bailey said. “It seemed like a relevant, timely thing that the kids could actually do a lot with, given the technology that we had. They could relate to it. That is how we started with the smart house.”

Bailey was thinking about another smart house project for this year – or maybe a smart house gone wrong, which morphed into the haunted house idea. 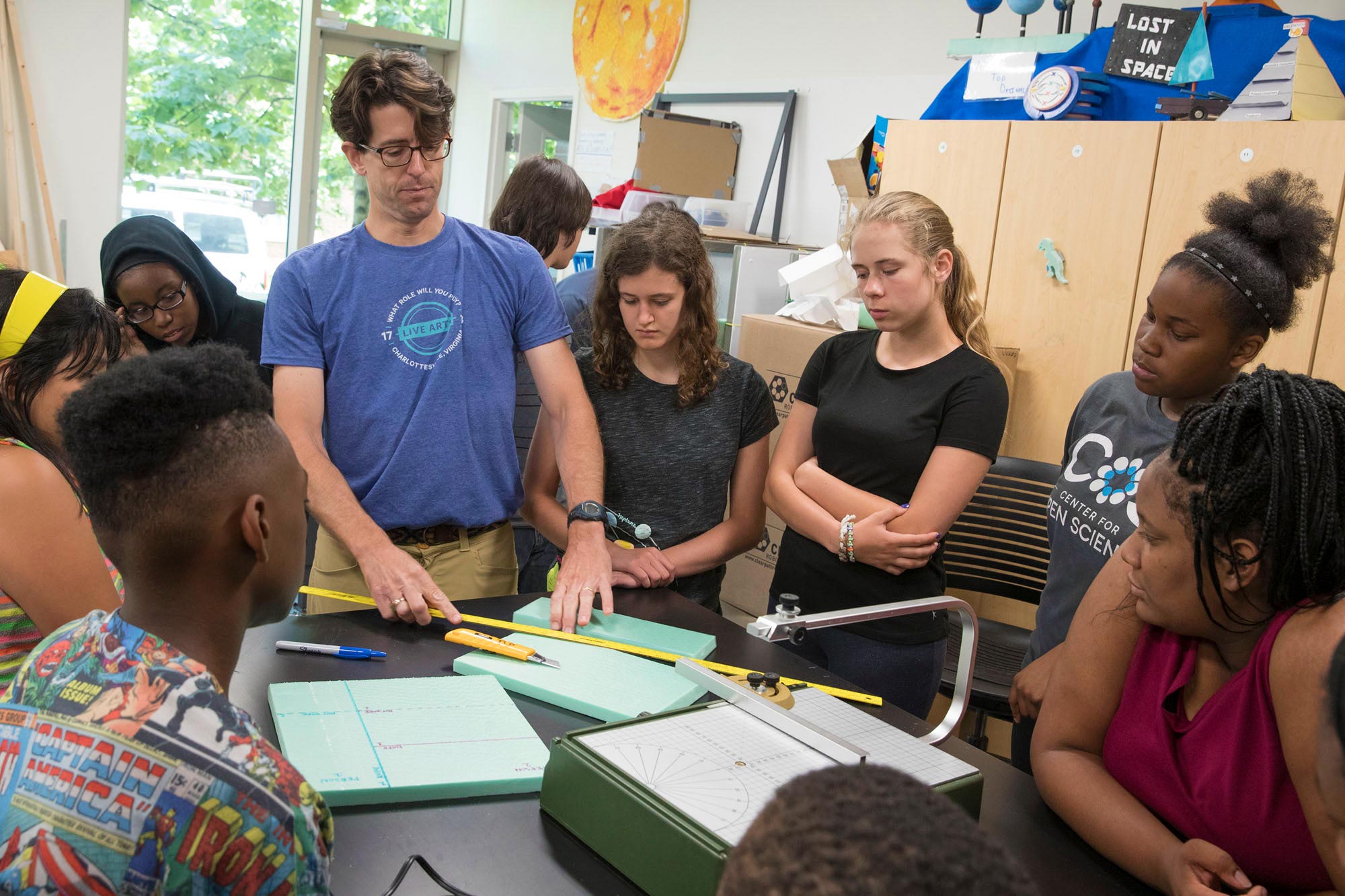 “C4K totally led the collaboration with Brown Residential College, to get them involved, so we could not just do this for this camp, which is cute and fun, but instead do it for a real client in a real space,” Bailey said. “Whether they realized it or not when they signed up for camp, the campers are joining a design firm for these two weeks … and our clients expect results.”

The campers first toured the site at Brown College to get a sense of the space. Afterward, they set up shop in Rice Hall, where they and their mentors, Matt Burke and Lizzie Hoeppner, who work for Computers4Kids, teleconferenced with Andrea Khattabi, a rising second-year student and one of the co-chairs of Hauntings on the Hill. The campers asked Khattabi where the boundaries are and exchanged ideas with her.

“It is very open-ended. We don’t know where this is headed; we don’t have a preordained sense of what the kids are going to create,” Bailey said. “You may come up with a great idea and have a prototype of it by Wednesday, and by Friday we may have ditched that idea, because it isn’t really that great, after we see other ideas, or transition it from something that works once to something that works 100 times in a row. It’s very fluid.”

Campers showed this fluidity in brainstorming ideas for their room in the haunted house, with ideas ranging from holographic clowns that pass through people, to ceilings that press down, to old women who shriek at the visitors.

Keith Scott, 12, a Buford Middle School student, suggested turning a section of the floor into a quicksand pit, in which the visitors would sink to their knees. Scott, who said he was part of the project because he wants to scare people, said he had learned a lot from Computers4Kids, such as programming.

“I’ve learned I can do many things that a lot of people can’t do,” he said.

Aparicio – who admitted that he does not like being scared himself – suggested creating a hologram of a clown that advances on people and maybe seems to pass through them. He said he is pleased with his camp experience.

“I have learned that all ideas count; nothing is bad,” he said. “I have learned how to use tools, technology and how to take computers apart and put them back together again.”

As part of the real-world experience, the campers are approaching the Brown College students as clients, customers who want a specific task performed.

“I teach engineering design at UVA and I like to get people understanding that engineers design things for people,” Bailey said. “That is going to be a big part of this camp, thinking about who are we designing this for and what they want out of a haunted house. Ultimately, we will use some technology to design and create ideas and build and prototype ideas that will actually meet the needs of people, which in this case is scaring them.”

Bailey said the current campers will start the process – developing ideas, determining what is possible and what is not – and then will continue to work on the projects at Computers4Kids throughout the summer and early fall.

“I think we will ramp it up again when my [UVA] students get back in August,” Bailey said. “I have a number of them who volunteer at C4K and I think this year we will focus on getting the haunted house up and running, instead of doing more general volunteering.”

Bailey said the UVA student-mentors would continue working with the camp group as well as other Computers4Kids members who become interested in the project later.

“C4K is very much about letting kids take the lead and give them the support they need to realize whatever it is they are trying to create,” Bailey said. “It is likely we will have some kids who weren’t part of the camp who will see what we are doing and get excited about it, and will want to work on it.”

Khattabi told the campers during the teleconference that the Brown College residents would concentrate on the Hauntings on the Hill after school started again in August. But she said there has been a lot of communication between the Brown residents and the campers, and one of the other co-chairs will visit the camp during the summer.

“The campers are bringing new perspectives and ideas to the Hauntings event that we have never considered, as we have never before incorporated electronic props built explicitly for Hauntings,” Khattabi said. “C4K is the first group to physically contribute to the haunted house; traditionally, the haunted house has been built by Brown College residents alone. Seeing how enthusiastic and professional these young people are really inspires me and my fellow co-chairs.”

Khattabi said it is important to keep up the enthusiasm.

“We hope that by working with C4K, not only will Hauntings deviate from tradition in an exciting way, but the residents and student body at large will be able to have a meaningful interaction with the Charlottesville community,” Khattabi said.

The campers will learn many different skills designing and constructing their contribution to the haunted house, according to Bailey, but it will mostly feel like fun to them.

Bailey said he wants the campers to take ownership of the project – understanding what the client needs, empathizing with users, generating ideas, prototyping solutions and converging on and implementing final solutions.

“The topic of a haunted house is definitely a fun topic ... but it is just a hook to get the campers invested,” he said. “The real value for the campers is going to be realizing that they can take a big, ill-defined project from beginning to end and seeing how collaborating together can lead to end results that far exceed what they thought was possible.”