Sculptor, U.Va. Students and Community Volunteers Turn Sticks into Art ‘On the Fly’ 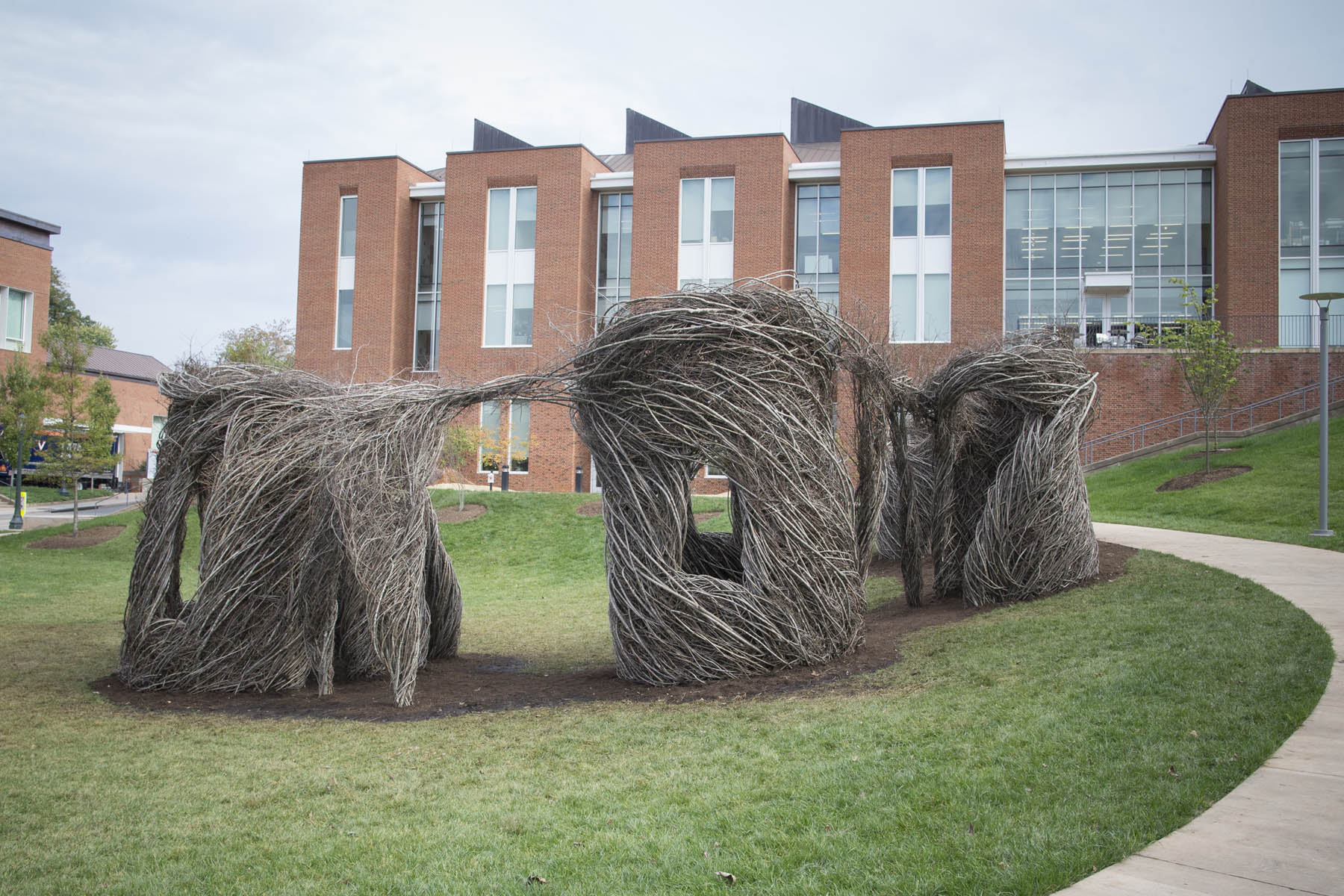 “When I grab a stick, I get a bunch of good ideas. I feel alive,” said University of Virginia artist-in-residence Patrick Dougherty in his documentary, “Bending Sticks.”

Dougherty – the guest of The Fralin Museum of Art at the University of Virginia, the McIntire Department of Art and the Office of the Vice Provost for the Arts – spent three weeks working with students and community volunteers installing his “stickwork sculpture” exhibit in front of the Ruth Caplin Theatre on the Betsy and John Casteen Arts Grounds.

The sculpture, called “On the Fly,” was assembled from Sept. 30 through Oct. 18 and stands just over one story high. It “contains a series of cylindrical rooms which open to the sky and cascade down the hill in a semicircle opening to the east,” explained Bill Bennett, a U.Va. studio art professor and “On the Fly” project manager.

Dougherty designed the work for the space but the work of building it took nearly 200 volunteers, including U.Va. students and community residents. The volunteers took part in every aspect of the project from gathering saplings to removing leaves and building the sculpture itself.

Dougherty appeared to thrive off of his volunteers’ energy and community interaction, which project assistant and U.Va. graduate Andrew Salmon claims is “social activity” for both Dougherty and those involved.

Dougherty agrees, “I really enjoy the feel of working with a lot of people. It’s like riding a wave.”

Two landowners in Albemarle County provided the raw materials for the project, which volunteers helped to gather. The process of choosing the right materials is a tedious one, as sticks must be harvested and chosen based on their flexibility, Bennett said.

“Generally it takes a tractor-trailer load to make a big piece. Maybe that’s six tons of sticks, I don’t know, but it’s a lot of sticks,” Dougherty said.

“I try to be very careful about where I gather. I look for places I think won’t harm the environment,” said Dougherty, adding that “with plant succession, the little [sticks] would just plain die out because there’s not enough light.”

Salmon sees the process and final product as an art piece that “isn’t political, but addresses environmental concerns in a positive, yet subtle way.”

Second-year student Nicole Zaccack of the School of Architecture was among several student volunteers who got involved in the project as the result of an architecture class that required participation on Dougherty’s project. Zaccack, however, said that the experience became more of an enjoyment than a requirement.

In addition to the design aspects, Zaccack said working with Dougherty proved to be the most fulfilling aspect of the project. “He was patient. He taught us how to use the materials and showed us how to design with raw materials,” she said. “One night we went out to dinner with him where he gave us advice, saying, ‘If you write down your ideas every night, you will eventually come up with something new and great.’”

Student volunteers agreed that their hours of labor over the course of three weeks were challenging, yet their reflections on the experience suggest that it was worth the effort.

Zaccack’s classmate, second-year Caroline Kraska, called her experience “awesome” and shared a similar enthusiasm about learning from Dougherty. “It’s inspiring that he started from just a habit, love and interest, and developed a career,” she said. “This is his livelihood and it’s special to take part in it.”

Each of Dougherty’s pieces is completed in three weeks of intense labor. “We worked daily from 8 until noon and 1 until 5, rain or shine,” Bennett said.

From sticks on the ground to a work of art, “It’s amazing to see simple materials transform so dramatically in such a limited time frame,” Salmon said.

Volunteers and now visitors who view the work are amazed to discover that “there are no fasteners, rope or wire used to hold the sculpture together. The bent sticks, each under tension with its neighbors, is what holds the work together,” Bennett said.

The sculpture went untitled until it was complete – a tradition with Dougherty’s pieces. After a call on Facebook for community suggestions, Dougherty decided to title the piece “On the Fly.” The title “alludes to the cascading aspect of the design and also to the improvisatory and jazz-like method that Dougherty employed to create this sculpture,” Bennett said.

The sculpture has been completed for less than month, yet Salmon has seen the impact that it is already having on the community. “People treat it as a mystical experience,” he said. “One woman brought her 94-year-old mother to see the sculpture. It’s different from most art because it accessible, entering the public space at all times.”

“On the Fly” will be on display for at least one year, depending on its reaction to weather. “It will not be allowed to fall into ruin. It will be taken down when it is no longer beautiful,” Bennett said.

“Bending Sticks,” a documentary about Dougherty’s work, will be played Thursday at 5:30 p.m. in the Culbreth Theatre on the Betsy and John Casteen Art Grounds as a part of the Virginia Film Festival. (For tickets, click here.)

Dougherty’s work is also the subject of an exhibition at The Fralin Museum that will run through Dec. 22. The exhibit features photographs and models of Dougherty’s earlier projects, as well as preparatory drawings for the installation at the University.

What Is the ‘4th Side’? END_OF_DOCUMENT_TOKEN_TO_BE_REPLACED