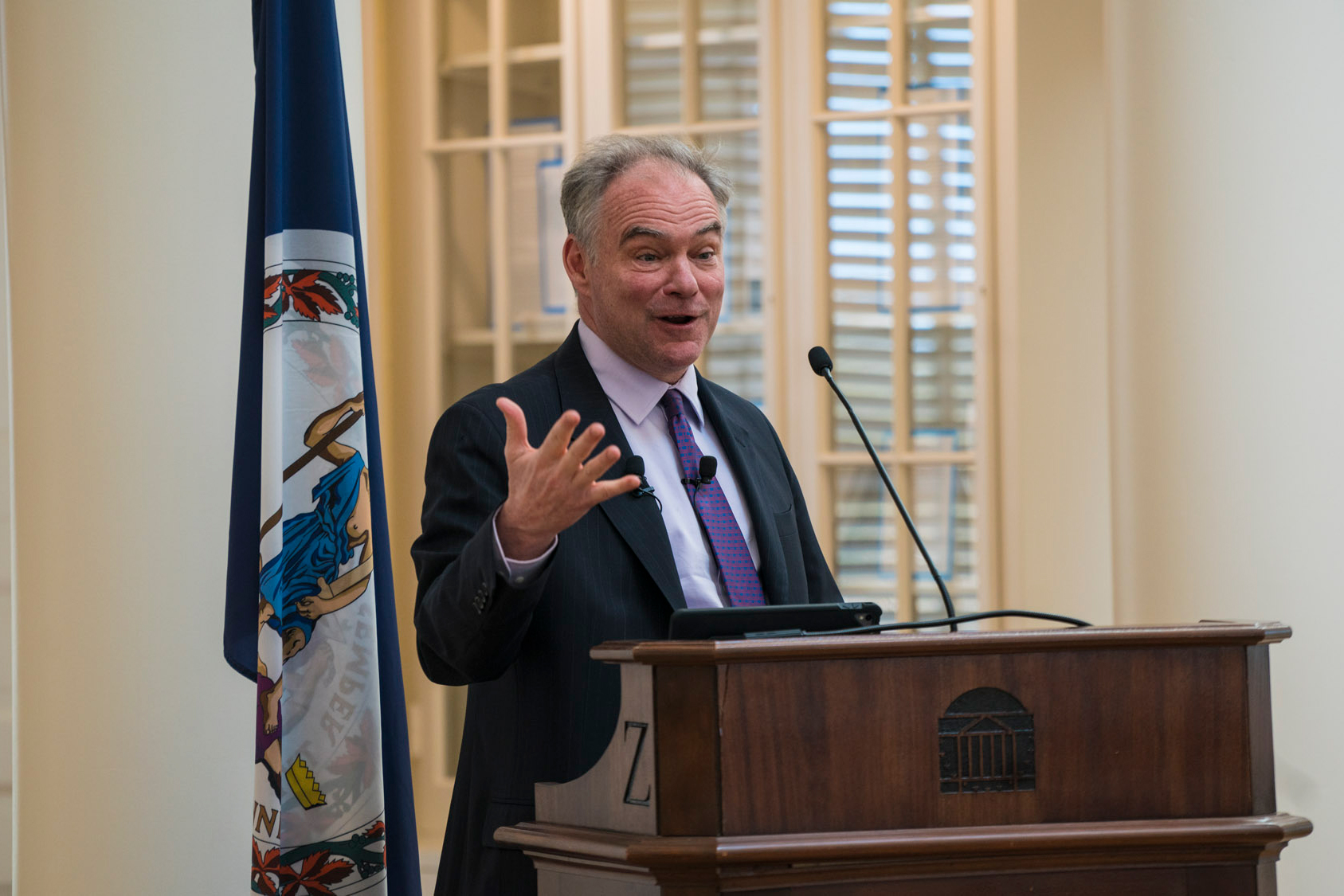 U.S. Sen. Tim Kaine of Virginia spoke with University of Virginia students Friday afternoon about the president’s power to authorize military action and his own concern about potential overreach.

“I would say we are probably closer to nation-state war than we have been in 30 years,” said Kaine, speaking in the Rotunda’s Dome Room. He cited conflicts with Russia, North Korea, Syria and others that he fears could escalate quickly.

Kaine, a former Virginia governor who has served in the U.S. Senate since 2013 and was also Democrat Hillary Clinton’s vice presidential running mate in 2016, said he has spent years advocating for new legislation to place stricter limits on presidents’ ability to use military force without Congressional authorization. 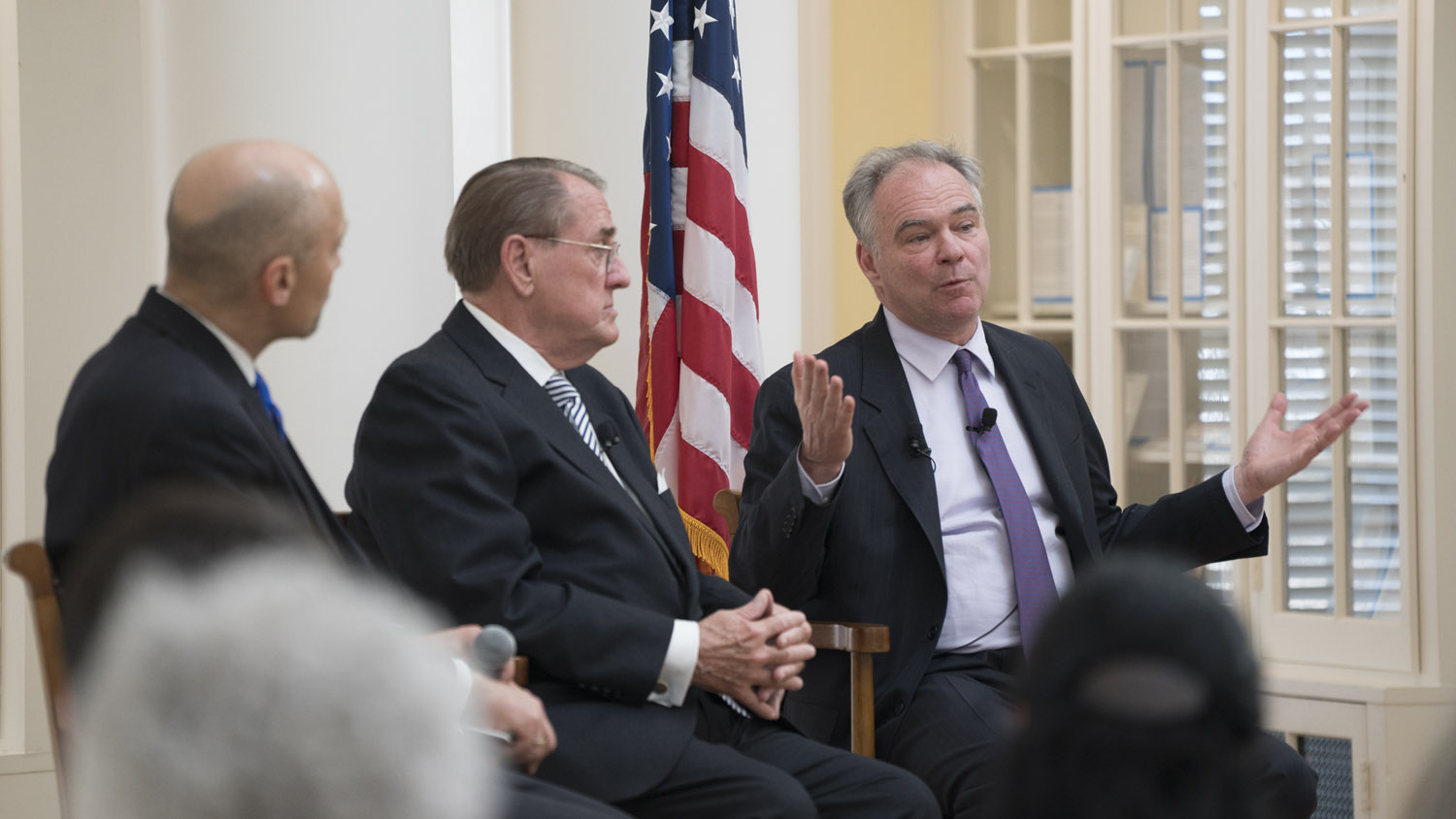 During Friday’s discussion, which was broadcast live, Kaine joined School of Law professor John Jeffries and Miller Center Executive Director Bill Antholis to examine the role that universities can play in such ongoing policy debates, with the Miller Center’s bipartisan National War Powers Commission as an example.

That commission, co-chaired by former Secretaries of State James A. Baker III and Warren Christopher, was formed in 2007 to clarify questions around how Congress can and should authorize the president to use military force. It spent more than a year analyzing the War Powers Resolution of 1973 and provided recommendations for updates that Kaine and others subsequently championed on Capitol Hill.

One member of the commission was in the audience, as was former Virginia Gov. Gerald Baliles, who was instrumental in its formation as the Miller Center’s executive director at the time.

“The Miller Center has been key to this discussion, and has been critical to my own thinking on the topic,” Kaine told the audience, which included of students from various UVA clubs, Miller Center faculty and community members. “I have been able to use the research done here to really develop an expertise in the Senate.”

He said the commission’s work informed three previous bills he introduced and also the bipartisan proposal he is currently championing with Republican Sen. Bob Corker of Tennessee.

If adopted, the proposal would replace the 2001 and 2002 congressional authorizations for the wars in Afghanistan and Iraq. Kaine and Corker’s proposal would authorize the executive branch to use military force against non-state terrorist groups like al-Qaeda, the Taliban or the Islamic State, but would require the president to seek Congressional authority for military action against nation-states, such as the recent airstrikes the Trump administration ordered in Syria.

“I think that was completely and unalterably illegal because the president did not come to Congress,” Kaine said of the recent strikes. “The 2001 authorization does not apply to war against a sovereign nation-state.” 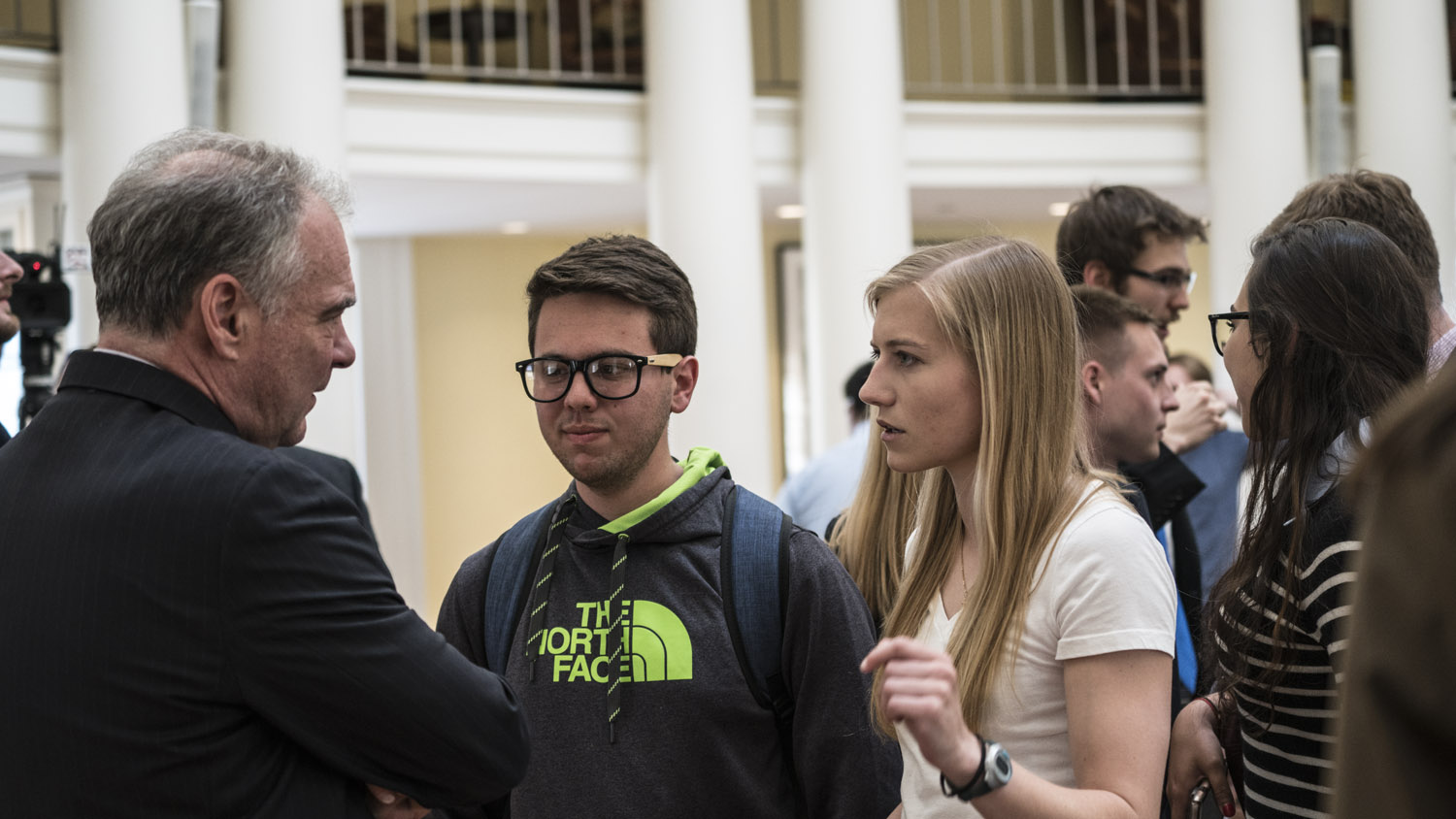 Kaine said the origins of the current debate can be traced back to the U.S. Constitution, which gives Congress the power to declare war, but also reserves the president’s right to take action quickly to defend against attack. That raises a lot of conceptual questions, Kaine said, about how exactly we define war and when the president should seek congressional authorization.

“The ‘What is war?’ question is not straightforward,” he said, noting that cyberattacks, drone strikes and far-flung terrorist cells have changed how we view war today.

After several years of work, he is hopeful that bipartisan interest in these questions is expanding.

“There has been a growing realization among both parties in Congress that we have to at least do something to rein in the 2001 authorization,” he said. “Eighty percent of the current Congress was not in Congress in 2001, and those that were told me that they did not intend for that authorization to be used for nearly 18 years.”

After the discussion, Kaine took several questions from students about everything from Senate term limits to the pros and cons of reinstating a military draft to the procedure for seeking international justification for military action.

Antholis posed the final question, asking Kaine what universities like UVA – founded to educate citizens in America’s fledgling democracy – could do to advance that cause in the 21st century.

“Income inequality is a massive civic destabilizer,” he said. “Everyone has to see a ladder that they can climb, and too many people in our society don’t. Universities can help us come up with strategies to deal with that.”

Second, he said, universities have a role to play in the maintenance of democracy worldwide.

“Democracies are having major problems right now with populist movements, anti-Semitic movements, anti-immigration movements and more,” the senator said. “UVA does good work in the international sphere, and I think we need to promote democracy as a model.”

A Giant ‘Thank You,’ a Dose of Optimism and Bonus Good News END_OF_DOCUMENT_TOKEN_TO_BE_REPLACED

A Year We Will Never Forget: 2019-20 in Review END_OF_DOCUMENT_TOKEN_TO_BE_REPLACED