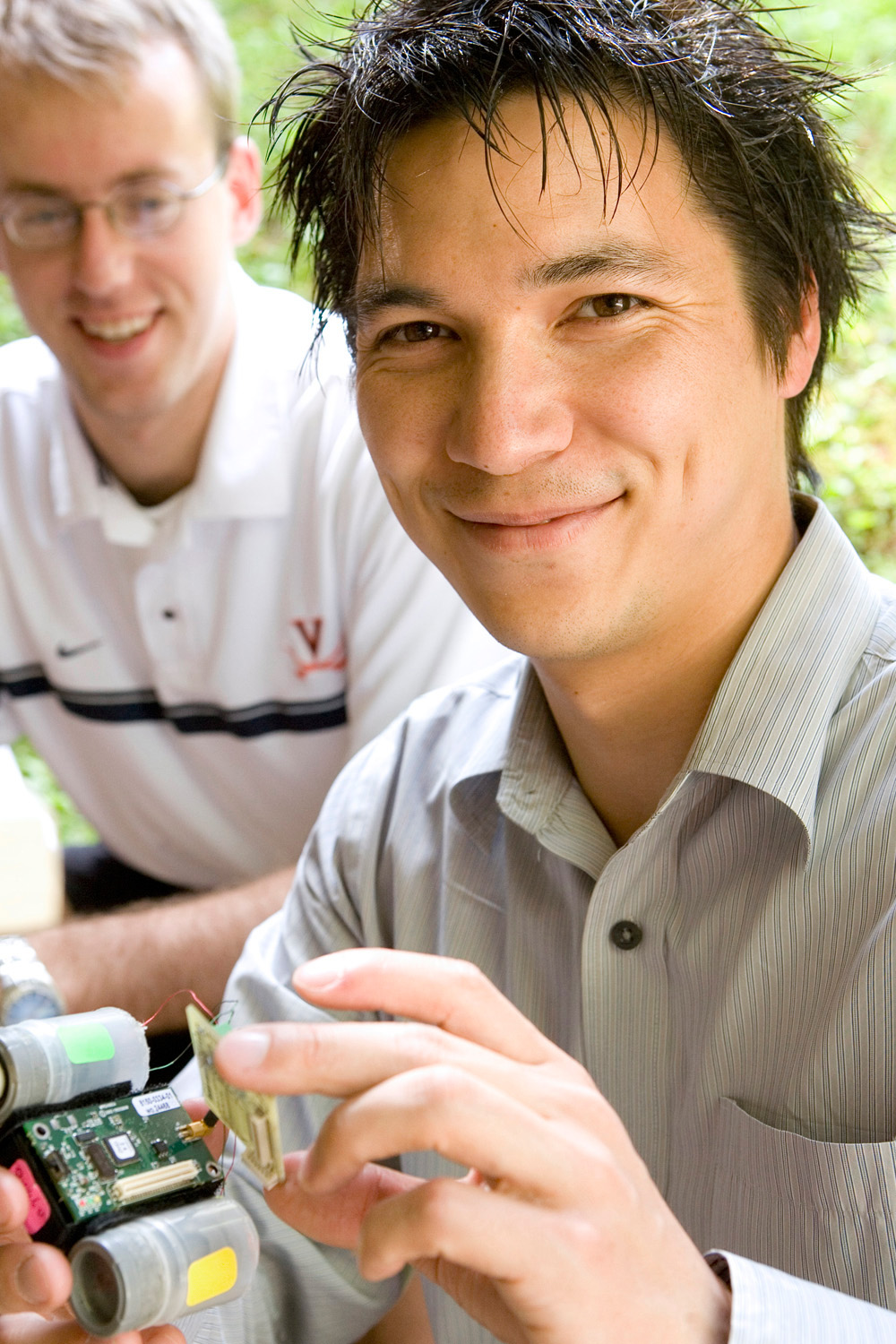 July 10, 2007 -- When it comes to finding the hottest restaurant in town or the best hotel for a vacation, the Internet is the tool of choice for a growing number of consumers. Most of us are now accustomed to using the Web to find addresses, check prices, read customer reviews and print driving directions before we go out. In turn, merchants want to use the Web as a tool to measure the effectiveness of storefront displays or signage. That’s where Kamin Whitehouse, assistant professor of computer science at the University of Virginia, comes in.

What consumers and storeowners really need is what he calls “ground truth” or accurate geographic information about customer traffic in real time. With a nascent project called MetroNet, Whitehouse hopes to use empirical data gathered by a network of wireless sensors to provide one of the first competitive applications to break down the barriers between the physical and digital worlds.

The MetroNet project — still in the planning stages — will start out by deploying sensors in storefront windows in downtown Charlottesville. “They sense the numbers of people walking by, walking into the store,” said Whitehouse. “For example, they could help figure out the effect of Fridays After Five on business, as well as other factors such as vehicular traffic on the roads and weather.” Merchants (who may be asked to help cover the cost of the hardware) could then access the data for free using a secure Web page.

Whitehouse, whose research interests involve combining remote sensor networks with programming interfaces to computer users, has received a $70,000 grant from Microsoft Research to integrate data from MetroNet into Microsoft’s SensorMap, which plots data from a worldwide network of sensors onto a mapping interface (such as Google Maps). Users then query the map for site- and time-specific information. An additional $10,000 in funding is coming from Barry Johnson, senior associate dean at the School of Engineering and Applied Science.

Whitehouse hopes to broaden MetroNet into a bigger research agenda, the World Wide Sensor Web, which would create an infrastructure to allow people worldwide to upload data from any sensor, sharing it with others. “You can search a map for areas of activity or search it for areas of no activity,” he explained. “You can check for [levels of] light, noise, pollution. It’s shared on the Web, so anyone can use it.” Other potential applications, he said, could include urban planning, population management, commuting, traffic and parking. “Cars have lots of sensor data that are not being exploited right now,” he added. “That has traffic applications.”

Creating wireless sensor networks means building the tiny processors that measure a whole range of data. Whitehouse came to U.Va. from the University of California at Berkeley where he developed the sensors he’s using for MetroNet. “The devices are my own designs, I built them personally,” he said. “One [for example] senses distance, using radio and ultrasound signals at the same time.”

Whitehouse hopes to have a MetroNet pilot program deployed by the end of the summer. As a prelude, he and a group of U.Va. graduate students placed an array of sensors around the main entrance to Olsson Hall, which houses the computer science department U.Va.. They will measure foot traffic “so the building can react to the inhabitants,” he said.

The sensors Whitehouse and his graduate students are deploying can also have wide-ranging applications in medicine, the environment and in architecture. Accordingly, Whitehouse is building collaboration with other areas of the University, including the School of Architecture, the School of Medicine and the environmental sciences department. “We can monitor buildings during earthquakes,” Whitehouse said, citing smart houses as one example. “Sensors in homes, in dishwashers, refrigerators and sinks can measure activity and infer what’s going on in the house.”

Whitehouse recognizes that a world with sensors arrayed in public and private spaces may make some people uneasy. There are privacy issues that go beyond commercial concerns, Whitehouse admitted. “A storefront wouldn’t necessarily want to publicize that it was unpopular,” he noted. “It’s a question of sharing data without sharing private information. It’s all [anonymous] aggregate values.”

Whether we like it or not, we’re already being watched and our purchasing habits analyzed, Whitehouse said. “There’s a reason why The Gap has spring clothes out in January; they’re testing the displays,” he noted. “Bed Bath & Beyond spends lots of money to have a person standing there who takes down this data – we replace the person.”

Part of the technology that Whitehouse is building allows people to preserve their privacy, or to trade their private information for convenience or a competitive edge. Why would people want to upload personal data? MetroNet provides the motivation so that people feel comfortable enough to share information with each other. “You have to have a motivation,” he said. “We’re building a social and psychological model to share with others.”

If the Web created a revolution in the interaction between our commercial transactions and personal lives, then Whitehouse hopes to spark a similar revolution between the Web and the real world. MetroNet’s “ground truth” would link a marketing tool for merchants with a resource for consumers. “We hope MetroNet becomes one of the first competitive applications,” he said. “We can generate a whole new area of data sharing information about the physical world.”

For All of Us END_OF_DOCUMENT_TOKEN_TO_BE_REPLACED