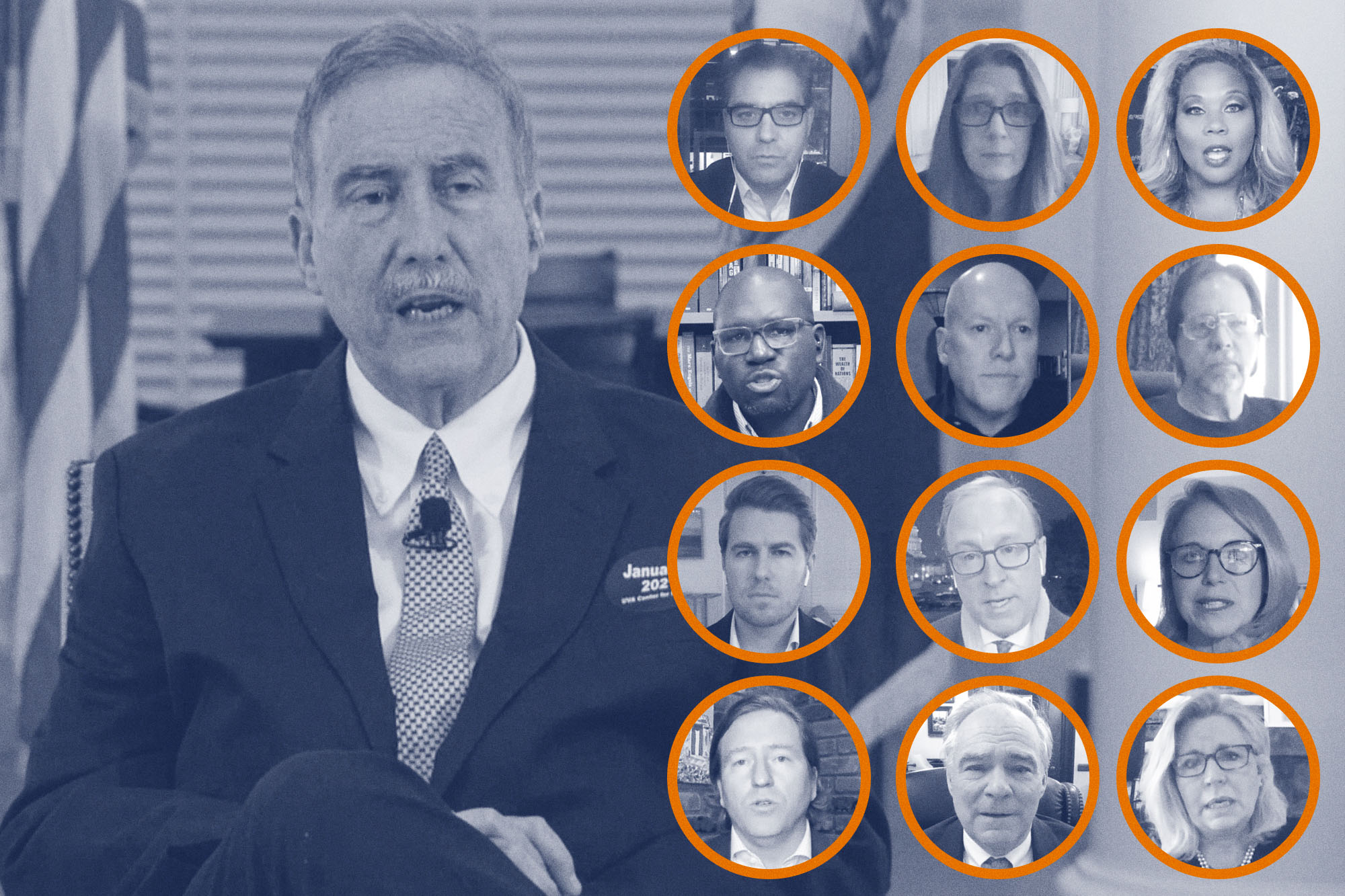 On the morning of Jan. 6, 2021, U.S. Sen. Tim Kaine was scheduled to be a panelist for the first in a series of “Democracy Dialogues,” to be hosted that evening by University of Virginia Center of Politics Director Larry Sabato.

By that afternoon, however, Kaine quickly became unavailable; he was barricaded in a “safe space” in the U.S. Capitol, without a phone and away from the chaos unfolding in the same building. He eventually returned to the Senate floor to see through the certification of President-elect Joe Biden, the move Donald Trump supporters infamously rioted against via violent siege.

Thursday marked one year since that insurrection, and Sabato was again moderating an online event from the Rotunda.

This time, Kaine was available, offering unique insight as one of Sabato’s many high-profile guests – from journalists to elected leaders and beyond – for “The Shock of January 6: First Annual Conference on America’s First Attempted Coup Since 1865.”

“I was extremely angry on Jan. 6 – that was my dominant emotion,” said Kaine, a Democrat from Virginia. “I had an emotion of relief that I had told my staff to stay home. … But my other emotion, not a surprising one, was anger, but it was an anger unlike any I’ve ever felt in my life. And it took me months to figure out why. What was the source of this anger? And why was it different than all other angers?

“And I eventually realized this was the reason it was different. I’m a white male born in 1958. Nobody had ever tried to disenfranchise me before. I was a civil rights lawyer in the capital of the Confederacy, I did voting rights work. It really mattered to me, but I was fighting to protect the voting rights of others.

“For about four or five hours on Jan. 6, 2021, I felt for a brief period of time what it was like to be disenfranchised. The attackers were trying to overturn the expressed will of 80 million people who had voted for Joe Biden and Kamala Harris.

Sabato said during his opening remarks Thursday that “it’s still hard to believe the insurrection happened. Yet if our republic is to survive, our democracy is to survive, then it is something we must never forget.”

While Kaine had a front-row seat to the attack on democracy, it was simultaneously playing out on live television. Jonathan Karl of ABC News and CNN’s Jim Acosta covered the shocking scenes that still linger symbolically today.

Sabato spoke with both journalists Thursday.

Acosta, citing the election “big lie” that triggered the Jan. 6 attacks as the main point – the Trump supporters’ continuing notion that Biden somehow stole the election, still being encouraged by Trump himself – said the continued splintering of America is a major issue.

“We’ve reached a very serious moment in this country,” Acosta said. “The country is at a crossroads. Are we going to believe the truth, or are we going to believe lies? And Donald Trump has convinced, you know, 30% to 40% of the country to believe his lies. … How do we solve that riddle? How do we crack the code and get the 30% to 40% of the American people who are believing Trump’s lies to come back to the real world? And until we do that, until we figure out that special sauce to get those folks to do that, we’re in a whole lot of trouble in this country.”

Getting to the root of misinformation has become a passion for UVA alumni Katie Couric and Christopher Krebs. Couric, a journalist who’s served as television host for ABC, CBS and NBC, and Krebs, the former director of the Department of Homeland Security’s Cybersecurity and Infrastructure Security Agency and a UVA Center for Politics resident scholar, are co-chairs of The Aspen Institute’s Commission on Information Disorder.

“I think disinformation and misinformation is really contributing to a national state of confusion,” Couric said Thursday. “Misleading information, outright falsehoods are being ingested and spread with abandon, fueled by anger and algorithms.

“And as we saw, that really laid the foundation for so many of the events. And you look back at Jan. 6, one year ago, and this false narrative – i.e. the ‘Big Lie’ – I think provided the fuel and the weird rationale for the behavior that we saw unfold on Jan. 6.

“So I was very interested in being a part of this commission with Chris and Rashad (Robinson) and a lot of really smart people, academics and journalists and corporate leaders to try to figure out how this is contributing to the decay of our democracy.”

That commission’s final report can be found here.

In a segment taped earlier this week and replayed as part of Thursday’s conference, U.S. Rep. Liz Cheney, the Republican from Wyoming who serves as the vice chair of the House select committee investigating the Jan. 6 attacks, ended Thursday’s session with some needed optimism.

“One of the things that has given me tremendous hope over the course of the last year is the young people that I talked to across Wyoming and across America,” she said. “Young people want to get involved in our process. Maybe because of what’s happening, because they see how high the stakes are.

“I believe that politics, fundamentally is about citizens influencing our government and you know, that it is a is a good thing, and it’s a very important thing. … We need many, many young people across the country engaged and involved.”

It’s Copperhead Season in Virginia. Here Is What You Need to Know END_OF_DOCUMENT_TOKEN_TO_BE_REPLACED

What’s Next for UVA’s Class of 2022? END_OF_DOCUMENT_TOKEN_TO_BE_REPLACED