Simon: Students Should Prepare to Lead in Global Society 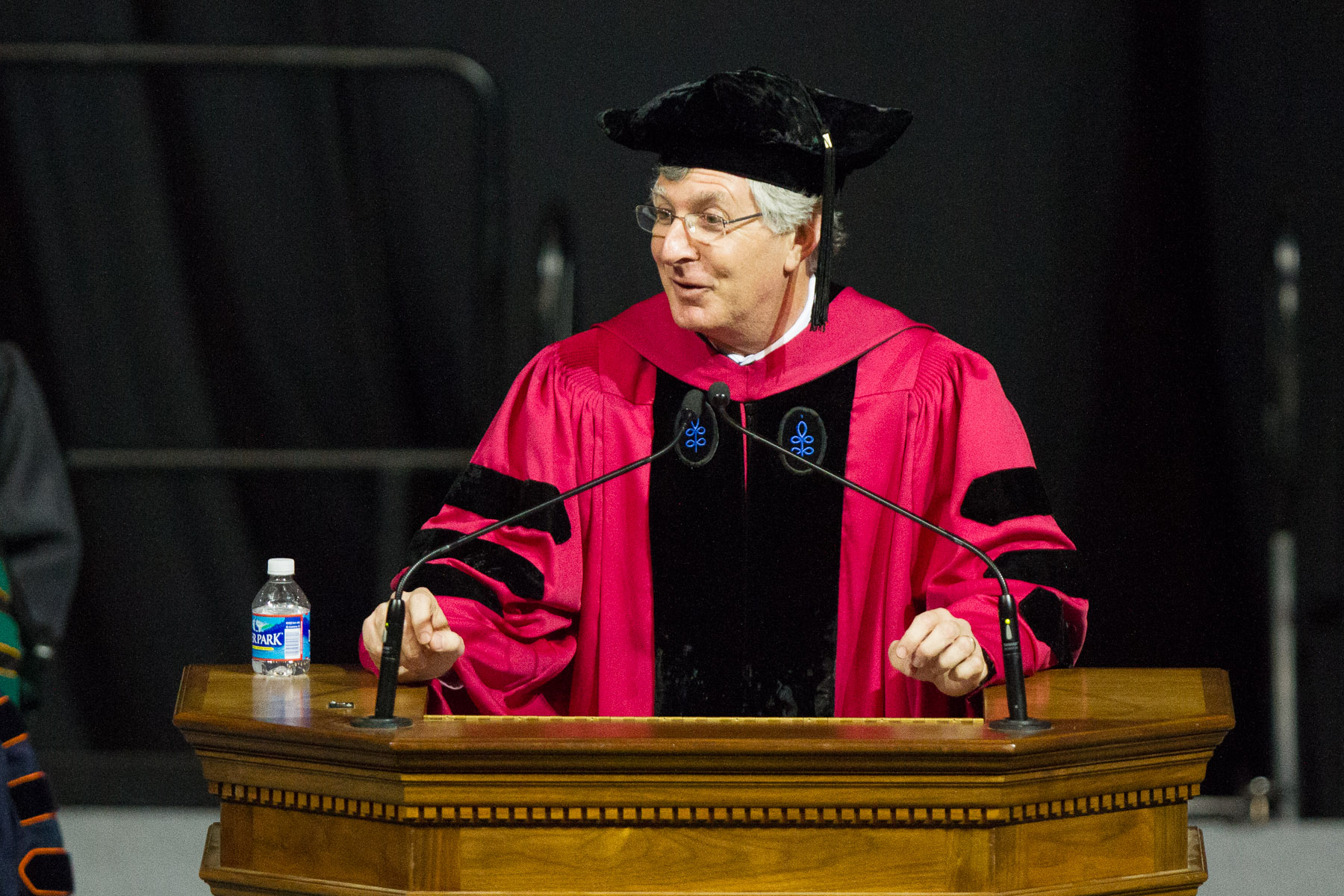 Today’s University of Virginia students should aspire to become lifelong learners who can excel in an increasingly global society, U.Va. Executive Vice President and Provost John Simon said Friday during his keynote address at Fall Convocation.

“I want all of you to engage the world and to have the tools in your toolbox to be a leader in our globally competitive and changing world,” Simon said, speaking directly to 344 soon-to-be-honored students at John Paul Jones Arena.

Those students make up the top 20 percent of the third-year class after four semesters, an academic achievement President Teresa A. Sullivan officially recognized during the ceremony.

She also presented the 2012 Thomas Jefferson Awards, the highest honor U.Va. bestows to faculty, to William B. Quandt, the Edward R. Stettinius Jr. Professor of Government and Foreign Affairs, and Chief Student Affairs Officer Patricia M. Lampkin. Winners of the 2012 faculty teaching awards were also recognized during the event.

Simon, who is also the Robert C. Taylor Professor of Chemistry in the College of Arts & Sciences, began his address by greeting the students in languages native to eight different countries: Poland, Japan, India, China, England, Italy, Turkey and Wales. The choice of these countries wasn’t random – in recent years, Simon has authored papers with colleagues from each, an idea he never would have imagined when he began his academic career in 1985.

“After all, at that point in time we all thought the best science was done in the United States, and outstanding people around the world wanted to move to the United States to do their science,”  Simon said. “But in recent years, scientific literature has become truly global. And I have needed to learn and relearn over these 25 years to engage in research, in response to how the world has changed during that time.”

Today’s students will enter a global marketplace in which they will need to be ready to engage with the world, he said. And technology makes that engagement easier than ever.

Simon recalled meeting renowned Japanese chemist Shosuke Ito in 2002 at a meeting in the Dutch province of North Holland. The two had breakfast, talked about their lives, and formed a friendship and professional collaboration that continues to this day. They have published several papers together, served on advisory and editorial boards together, and both have moved into administration. But they’ve never had another face-to-face meeting since that breakfast, Simon said.

“How do we put all of this in perspective?” he said to the students. “My ending point is your beginning. As I enter the final decades of my career, your careers are about to start. What I have experienced as an emerging global landscape will become your global training ground as you go forward.”

Today’s students will also be required to continue learning throughout their careers, he said. He noted that students today are likely to work longer than preceding generations did, and that the increasing pace of professional and cultural changes will force them to adapt more quickly than their predecessors.

“You cannot be certain where – what city, what country – you will make your lives, as opportunities are becoming increasingly global,” Simon said. “You will likely change careers several times and for some of you, success will be measured more by teamwork than individual accomplishments. Many of these teams will include members from all parts of the globe, and truth be told, you may know some of these team members only through communications enabled by technology.”

To prepare for his talk, Simon asked several colleagues and friends, “What must students experience as part of their college education to be prepared for success as global leaders?”

He combined the answers into a Top 10 list. That list included advice to begin with a broad liberal arts education and specialize later. Other items covered the importance of learning about the world, including participating in study abroad, if possible, and learning languages. The No. 1 entry, however, was to be a “traditioned innovator,” a phrase Simon first heard from a former colleague.

“Understand history and culture, so that you can see ways of bringing the past into the present in an innovative way,” he said.

Simon closed his remarks by referencing a Sept. 29 editorial published in the New York Times, “Follow a Career Passion? Let It Follow You.”

He read a part of that editorial, which gave the following advice to young people who “constantly wonder if the grass might be greener on the other side of the occupational fence.” That advice was that passion is not something a person follows, but something that follows them as they put in the hard work to become valuable in the world.

A Year We Will Never Forget: 2019-20 in Review END_OF_DOCUMENT_TOKEN_TO_BE_REPLACED

‘What Will You Carry With You?’ Remarks From UVA President Jim Ryan END_OF_DOCUMENT_TOKEN_TO_BE_REPLACED