‘Softball’s Sampson’ Adding to Her Legacy at UVA 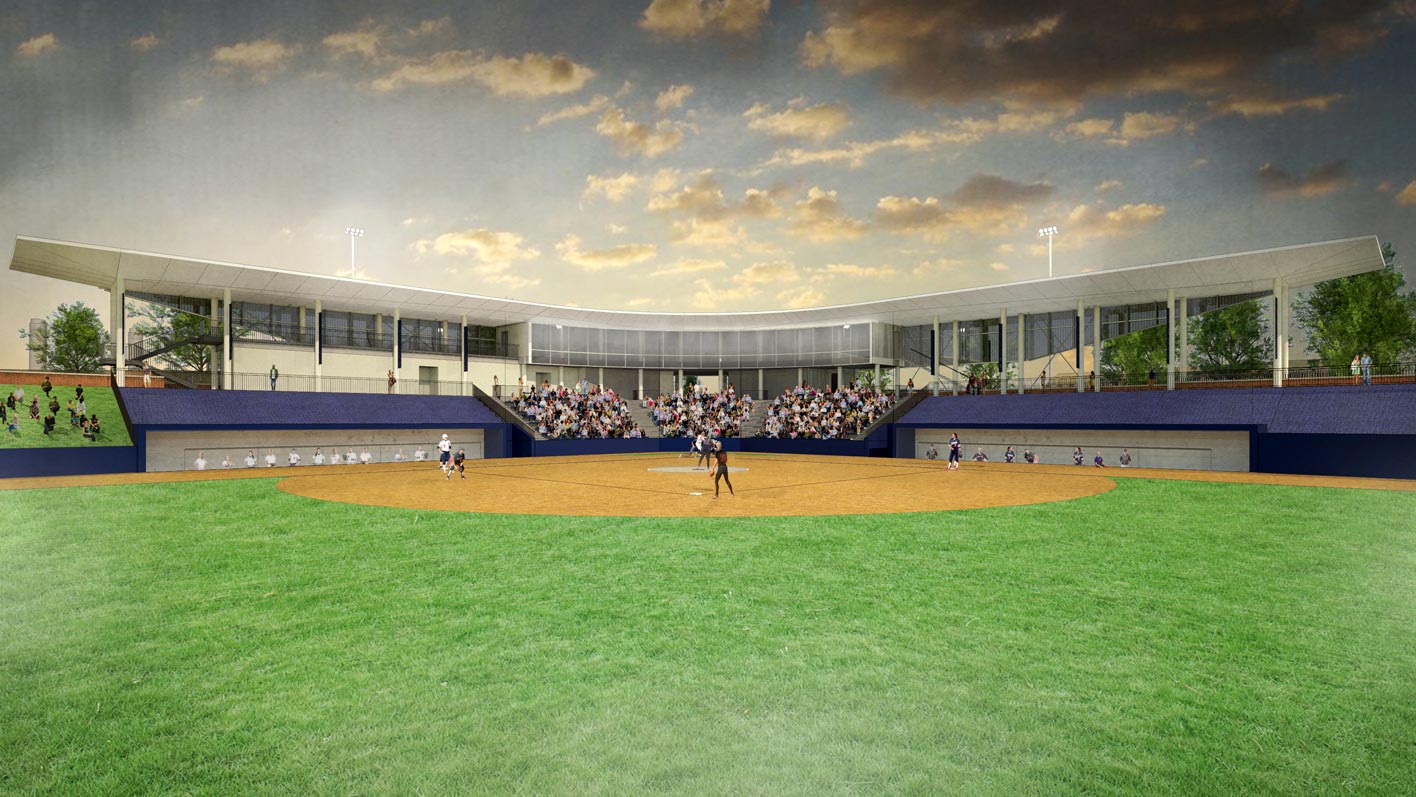 In 2014, Lisa Palmer and her mother, Frances, endowed a full scholarship at the University of Virginia. It’s awarded annually to a Cavalier softball player from outside the commonwealth who exemplifies leadership, hard work and dedication to the team.

The first recipient, in 2014-15, was Madison Labshere, from El Cajon, California. Then came Kaitlin Fitzgerald, from Placentia, California, in 2015-16; followed by Erika Osherow, from  Darien, Connecticut, who’s the recipient of the Lisa and Frances Palmer Scholarship this academic year, as she was in 2016-17 and 2017-18.

“My mother and I really wanted to make an impact on Virginia softball and give back and support it, because softball and the University made such an impact on both of our lives,” Palmer said from Jacksonville, Florida, where she’s the president and chief financial officer of Regency Centers Corp.

“So when it appeared that there wasn’t a lot of traction for a new stadium [in 2014], we pursued other options.”

For years, there had been talk at UVA of improving the softball facilities, but nothing significant came of those discussions. Thanks in large part to the Palmers’ generosity, however, a new day is finally coming for a program that’s perennially lagged behind most of its ACC counterparts.

At its September meeting at the Rotunda, UVA’s Board of Visitors approved the schematic design for a new softball stadium. It will be located at the southwest corner of Massie and Copeley roads, on what is now a practice field for soccer and lacrosse. The new stadium will be about seven-tenths of a mile from the Cavaliers’ current home, The Park, a no-frills facility tucked out of sight in a far corner of North Grounds.

“It’s a game-changer for us,” said Joanna Hardin, who’s in her third year as Virginia’s head softball coach.

“It gives us the opportunity to be on a national stage,” Hardin said. “It’s not the bricks and mortar that make a program, but being visible sure helps to gain momentum. We’re in the middle of the athletic precinct, and so for anyone that’s going to a basketball game, soccer game, lacrosse game, baseball game, we get to be right in the thick of it.”

A lead gift from Lisa and Frances Palmer is driving the project, which also will include a player development center. UVA officials expect to break ground this month and complete the project before the start of the 2020 season.

Once the Palmers saw a renewed commitment for a new stadium, they began exploring ways to help facilitate and support the project.

“I always wanted to have a major role in it,” said Lisa Palmer, a former UVA pitcher who was the first player in program history to have her jersey number, 22, retired.

“My participation in softball and my attendance at the University certainly helped form me as an individual, and I think it’s a really large part of who I am and has played a large role in my success.

“Learning so much from playing a team sport at such an outstanding university has really helped develop my values and my work ethic and determination. So I wanted to give back, and I also wanted a way to honor my mom, because it’s important to her to see a Lisa Palmer legacy at the University.”

Palmer, who grew up north of Philadelphia in Bucks County, Pennsylvania, earned a bachelor’s degree in economics from UVA in 1989. She received an MBA from the University of Pennsylvania’s Wharton School in 1994.

“Lisa is a celebrity in our program,” Hardin said. “When we talk about Lisa Palmer, our young ladies know who she is. They know where she lives; they know what she does.”

Hardin laughed. “They’ll say, ‘I want to be like Lisa Palmer when I grow up.’ I think there’s this sense of awe and respect for what she did as an athlete, but also what she’s done post-college and what she’s given back. And I think that was just a big step for us as a women’s sport to have one of our own come back and make that commitment, and our student-athletes understand that.

In 2002, Palmer was named to the ACC’s 50th anniversary softball team.

“She’s like the Ralph Sampson of the softball program,” Hardin said. “Our players appreciate her; they look up to her, they respect her.”

Her mother, who now divides her time between Pennsylvania and Florida, provided extraordinary support during Palmer’s four years at UVA.

“Literally, in four years, I think she only missed the midweek games, and that was it,” Palmer said. “She made every weekend game, and I mean every weekend. Not just home games. Because we didn’t fly then, we either drove ourselves in vans or took a minibus. She would drive from home in Pennsylvania and then follow the vans or bus, sometimes alone or with another parent. She even drove to Florida with us.

“Obviously, it meant the world to me then, but I was probably a little bit too young to really appreciate it. Looking back now, it’s just amazing. And the commitment she made to me and the support she gave to me, it’s just so meaningful.

“When I graduated, I remember her saying she thought she was going to miss it more than I would. And when we went back to Charlottesville for the first time together to watch a game two years ago, I could see tears in her eyes.”

When Palmer played at UVA, the softball field sat where Klöckner Stadium is now.

“It was an awful facility,” Palmer recalled. “We had wooden benches. We had no locker room. We had no seating for our parents and friends. We had no parking – literally, zero parking – so we left our cars on the side of the road. All of our parents did, too.”

The Cavaliers moved to The Park in 1995. The stadium has a good playing surface, but otherwise can’t compare to the softball facilities of UVA’s peers. Moreover, its remote location limits the program’s exposure.

The new stadium, by contrast, will be featured prominently in the North Grounds athletics precinct, next to Lannigan Field and Klöckner Stadium and near Disharoon Park and John Paul Jones Arena.

UVA considered placing the new stadium at Lambeth Field before determining that wasn’t a viable option.

“As exciting and as historic as Lambeth would have been,” Palmer said, “this will give the program even more exposure. I think it will even more positively impact the players’ experience. I think it makes it easier for fans and the rest of the community to engage with softball.

“Softball is the third-most-watched collegiate sport on ESPN. It’s a fantastic family experience and sport for fans.”

Beginning in the spring of 2020, the sport will receive additional exposure on the ACC Network, which is scheduled to be launched next year. The network is expected to televise a number of home games from UVA’s new stadium.

“Softball is so hot right now,” Hardin said. “It’s such a popular sport in the United States, and I think [UVA students and fans] miss out on it because we’re so far away and so tucked away. So I think our fan base is going to grow.”

The program’s inaugural season was 1980. Only once, in 2010, have the Cavaliers advanced to the NCAA Tournament. Many factors have contributed to UVA’s struggles in this sport, including poor facilities.

Whatever success the program has had, Palmer said, has “certainly not been a result of the facilities and the resources for the softball players. It’s the University selling itself. So when you combine one of the best institutions in the country with new facilities and an obvious commitment to continue to make the program even better, it’ll definitely make recruiting easier.

“And it’s unlike other sports. You don’t play collegiate softball with the goal of continuing to play softball after you graduate. After you graduate, you’re going to enter the workforce. And so the fact that the University is such a quality school matters.”

Hardin came to UVA from McNeese State in June 2016. She met Lisa and Fran Palmer that fall on a trip to Florida with former UVA softball player Casey Steffan, who’s now the Virginia Athletics Foundation’s director of membership and development.

“Jo actually came to visit me in Jacksonville after she was hired,” Palmer said. “For that alone, I thought, ‘Wow, she’s different.’ That was so appreciated. She just gets it. I think she’s fantastic.”

“That’s how crazy I am,” she said, laughing.

“It’s hard coming from Jacksonville [to Charlottesville],” Palmer said, but she has season tickets for football and tries to attend at least one game at Scott Stadium each year, as well as one or two basketball games at JPJ.

On her visits to Charlottesville, Palmer would often stop by softball practice and speak to the team, but she hadn’t been to a game at The Park until 2017, Hardin’s first season at UVA. Palmer and her mother were present when Labshere was honored on Senior Day that spring.

“What was so fantastic about Madison was, she was the first person in her family to go to college,” Palmer said. “So you can see the impact that scholarship had on her whole family. And to this day, I know her parents as a result of it and really have a connection with Madison. We still keep in touch, and Erika [Osherow] and I text relatively frequently, to check in and see how she’s doing.”

As excited as she is about the stadium project, Palmer said, what “I find even more enjoyable and rewarding is the ability to really influence young adults and serve as a role model to them. So the connection back to the team has been really rewarding for me.”

A Year We Will Never Forget: 2019-20 in Review END_OF_DOCUMENT_TOKEN_TO_BE_REPLACED

‘What Will You Carry With You?’ Remarks From UVA President Jim Ryan END_OF_DOCUMENT_TOKEN_TO_BE_REPLACED