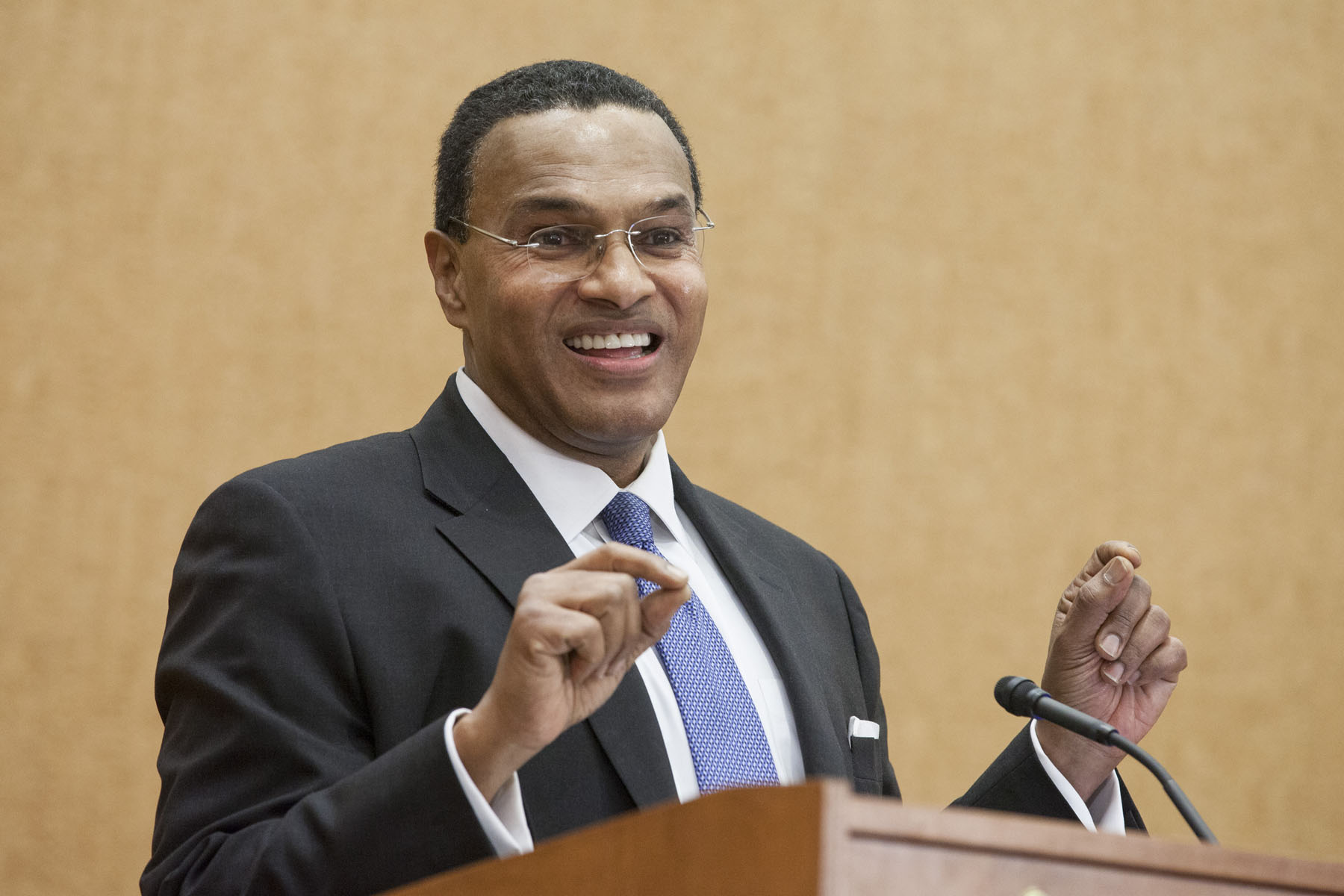 When University of Virginia President Teresa A. Sullivan was in high school, she was the only female in her physics class, because the enrollment was open to males first. She got the last seat available in the class.

Taking that class opened doors for her that led to more science opportunities, and eventually to her academic career, she said.

When Freeman Hrabowski attended graduate school at the University of Illinois, Urbana-Champaign, he was the only black student, and no one would study with him.

Hrabowski, now president of the University of Maryland-Baltimore County, spoke on Grounds Tuesday as part of a public event to launch U.Va.’s $3 million, five-year grant from the National Science Foundation’s ADVANCE Institutional Transformation program. The program’s goal is to promote women’s full participation in academic careers in science, technology, engineering and mathematics, the so-called “STEM” fields. The grant program also extends to the social and behavioral sciences and economics – referred to as “SBE” – fields in which women also are underrepresented.

His talk was one event in a daylong program that included several panel discussions addressing issues related to the program’s goals.

At UMBC, Hrabowski led his school’s ADVANCE grant program from 2003 to 2007. During that time, the percentage of women in tenured or tenure-track positions in the STEM fields increased from 12 percent to 32 percent, he said.

What has made a difference at his university and others around the country, he said, is the chance to look in the mirror and to see the good, the bad and the challenging parts.

His institution had already started to change the culture and establish programs that helped boost the academic success of minority students.

National statistics showed that only 20 percent of black and Hispanic students who started college planning to major in science or engineering graduated in one of those fields, compared to 32 percent of white students and 42 percent of Asian-American students.

“Here’s the fascinating, counter-intuitive fact: the higher the SATs, the larger the number of AP credits in STEM areas and the more prestigious the university, the greater the probability that a student will leave science or engineering within the first year or two,” Hrabowski said. He attributed that to the weeding-out purpose of many introductory science classes.

He was stunned when some female faculty members met with him to tell him there were problems for women in the sciences, he said, and when he found that only 12 percent of female faculty held tenured or tenure-track positions.

First, he had to accept the idea that he was making some assumptions that were not necessarily true, he said, and to admit he had more to learn about the issues. Analysis should include not only looking at numbers in the science disciplines broadly, but also looking at specific departments.

“What are the good questions to ask? How do we shine light on our environment in such a way that people don’t feel threatened or that we’re pointing fingers?” he asked.

The ADVANCE group at UMBC was able to create “a climate for robust conversation” without projecting a sense of blaming people that enabled the school to look at itself more critically, he said. That was necessary because the male faculty didn’t see the problems women saw.

For example, when the ADVANCE group looked at tenure rates in specific departments, it found that where serious mentoring existed and expectations for earning tenure were clearly spelled out, more junior faculty – women and men – received tenure. Strong mentoring programs, as well as hiring plans including eminent female professors, were then replicated in other departments.

The ADVANCE program also brought more attention to the balance of research, teaching and service and created ways to help faculty. Because female and minority faculty ended up spending more time on service-related projects and were in higher demand to be on committees or help students, they might not spend enough time on research. With some coaching, they could learn to say “no” and get back on track in their research.

Eventually UMBC’s Faculty Senate got involved; they began to see the need to make tenure expectations consistent to improve the support for all junior faculty, he said.

Hrabowski cautioned that a university can make progress, but must continue the efforts that led to it, or things could slide back to where they were.

“What has worked at my campus that has been so amazing,” he said, “is that the ADVANCE program has made us much more attractive to the best of scientists and engineers, men and women of all races.”

Sullivan said, “Over the last decade, U.Va. has worked to increase female representation in its STEM fields, particularly at the doctoral level, through mentoring and outreach activities and through extending support to graduate students. But this grant will help U.Va. lead the way in creating environments that encourage the best and brightest women to enter and remain in these critically important fields.”

At U.Va., the ADVANCE program consists of five initiatives that aim to improve departmental climate, document the experiences of senior and retired women faculty, support search and selection, fund women’s research and scholarship, and encourage innovative approaches to addressing underutilization of women in STEM and SBE academic careers.

The first year of the grant will focus on department-level projects, climate assessment and structural reforms.

In the second year, a University-wide “Tournament of Ideas” – with cash prizes for the winners – will encourage faculty members to think entrepreneurially about how U.Va. can more effectively reach, recruit and nurture STEM and SBE women.

In addition to these and other enhancements, STEM and SBE faculty will be encouraged to apply for small U.Va. ADVANCE grants at key moments in their careers.

A Year We Will Never Forget: 2019-20 in Review END_OF_DOCUMENT_TOKEN_TO_BE_REPLACED

‘What Will You Carry With You?’ Remarks From UVA President Jim Ryan END_OF_DOCUMENT_TOKEN_TO_BE_REPLACED