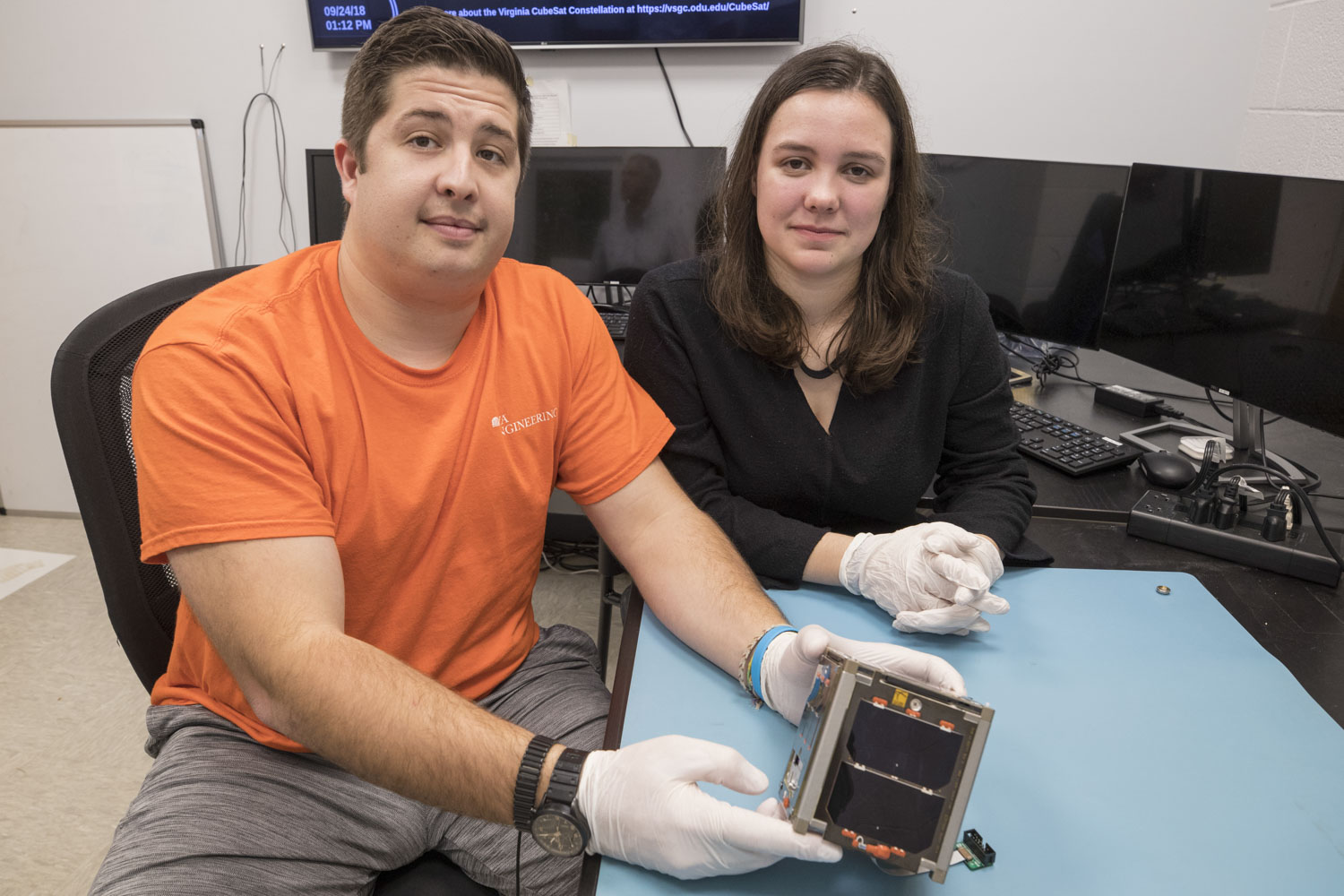 It’s only a matter of time.

University of Virginia engineering students will soon deliver to aerospace company SpaceX a small, cube-shaped spacecraft of their own design and construction for launch in late November from the Kennedy Space Center in Florida. The craft, known as a “CubeSat,” will be used in a NASA mission to better understand the effects of atmospheric drag on spacecraft and debris orbiting Earth.

During the six-month mission, students working with their mentor, mechanical and aerospace engineering professor Chris Goyne, will track the craft by radio as it passes over from horizon to horizon on each orbit. They will gather and analyze data while working closely with student teams at Virginia Tech and Old Dominion University, which also are deploying CubeSats, and with Hampton University. The universities are working together under the umbrella of the Virginia Space Grant Consortium.

“We’ve completed and passed all of the tests required for the flight, including vibration testing at NASA Langley Research Center, and earning our FCC radio license, and now we finally are ready for launch,” Goyne said. “More than 100 UVA students have worked on this project over the last three years, preparing for this mission. It’s an exciting culmination of a great deal of hard work.”

The roughly softball-sized spacecraft, named “Libertas” for the Roman goddess of liberty, is slated to be launched into space atop a Falcon 9 rocket and delivered to astronauts aboard the International Space Station via a Dragon capsule. Astronauts then will deploy the three university-built CubeSats as a “constellation,” each craft flying on its own. Students at each of the participating universities will record and analyze the crafts’ slow descents back to Earth over months, until the tiny objects burn up in the ever-thickening atmosphere.

“Though many kinds of spacecraft have been deployed in orbit for decades, it still is difficult to predict exactly where and when such craft will enter the Earth’s atmosphere,” Goyne said. “This CubeSat mission is serious science, and by the time it ends we should have meaningful data to help NASA better understand the decaying orbits of spacecraft.” This summer, five of Goyne’s students worked hard to finalize preparation of Libertas for the rigors of space flight. Exceptionally hard.

“I don’t even want to know how many hours I’ve worked on this,” said UVA and mission team leader Erin Puckette, a fourth-year aerospace and mechanical engineering student. “It’s taken a lot of time-management and coordination.”

“I logged many, many hours on this project over the summer,” said Trace LaCour, a fourth-year electrical and computer engineering student who provided electrical support to the project. “Basically, I’ve worked all summer to help make our CubeSat functional.”

The students, working on a grant from the Virginia Space Grant Consortium, said the project has allowed them to be both independent thinkers and team players as they’ve worked their way through a seemingly endless series of problems and challenges, from design and construction of the craft to writing the computer code for its operation.

Puckette and LaCour said the CubeSat project has provided valuable on-the-job training, as they have worked as engineers on a real-world – or, out-of-this-world – NASA mission. They’ve made countless calls to engineers, technicians and other experts at the space agency, and to aerospace and computer companies as they built their expertise in areas that transcend what they’ve learned in Engineering School classes. They’ve also met with, and coordinated planning with, their student colleagues at the other Virginia universities.

“We’ve taught ourselves a lot, and learned the hard way – by doing,” LaCour said.

“We’ve integrated multiple pieces of information with multiple hardware and software components to make a single system,” Puckette said. “I’ll be both happy and sad to see this spacecraft leave the Earth. It will fulfill its mission, but will also never come back.”

Of course, the data gleaned and engineering lessons learned will long outlast the mission.

A Year We Will Never Forget: 2019-20 in Review END_OF_DOCUMENT_TOKEN_TO_BE_REPLACED

‘What Will You Carry With You?’ Remarks From UVA President Jim Ryan END_OF_DOCUMENT_TOKEN_TO_BE_REPLACED