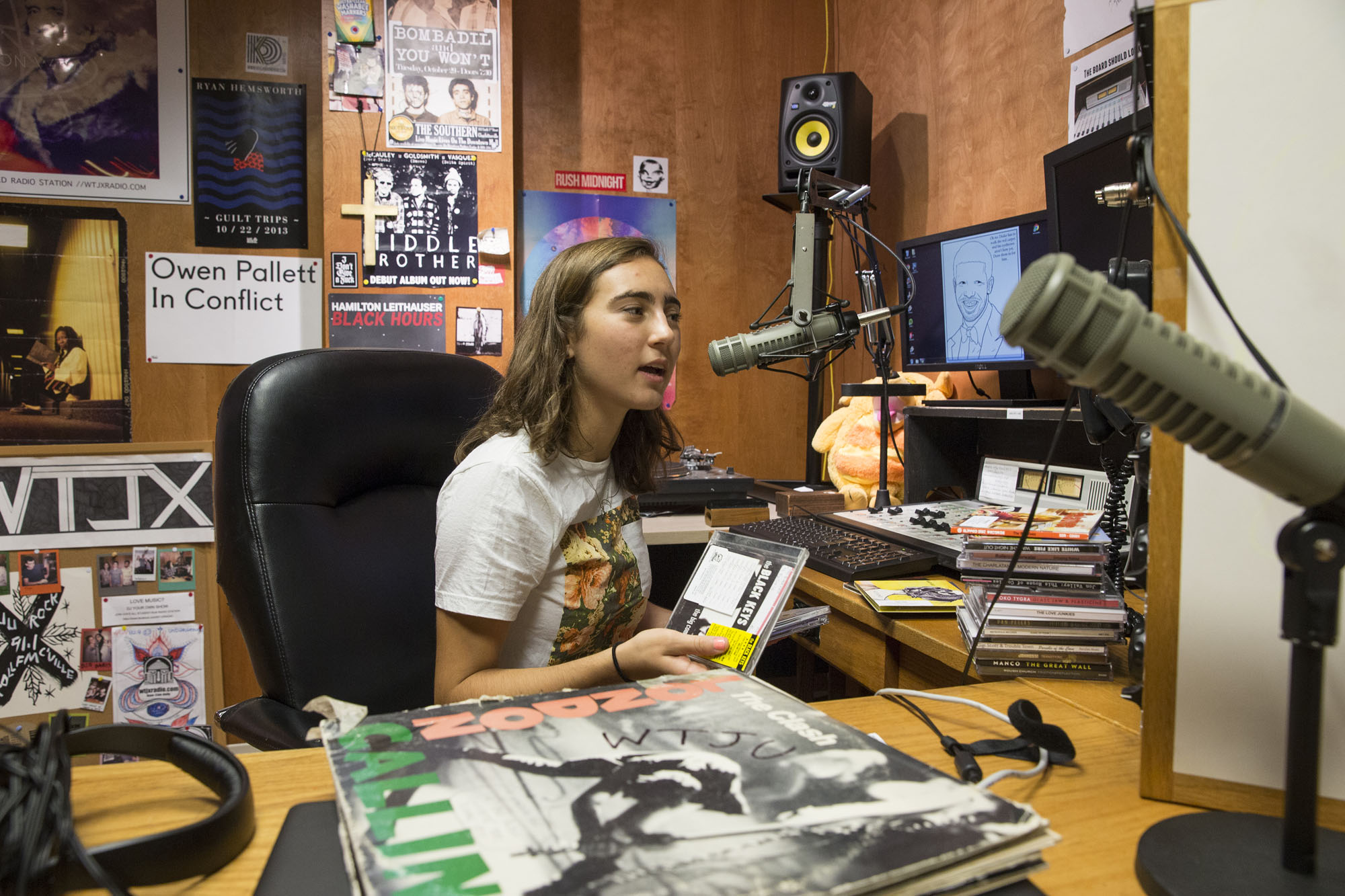 Helena Nicholaus, a student DJ for WXTJ, sits in front of the mixing boards at the WXTJ studio in Lambeth Commons.

WXTJ, a radio station run entirely by University of Virginia students, is slated to begin broadcasting at 100.1 FM – supplementing its continuing online broadcast – sometime within the coming months.

Originally established in August 2013 as an Internet-only offshoot of WTJU-FM, U.Va.’s non-commercial educational radio station, WXTJ will feature free-form programming curated by more than 100 volunteer student disc jockeys. Its signal will go out over a low-power FM broadcast covering the city of Charlottesville and nearby suburbs.

WXTJ was developed by members of WTJU to increase student engagement in radio broadcasting at the University. When WTJU was founded in 1957, the on-air hosts were students, and the programming was predominantly classical.

The station’s programming and volunteer makeup gradually transformed over the coming decades with the addition of female volunteers and more rock, folk and jazz programming. In the early 1990s, there was a drastic shift in the leadership structure of the station, Moore said.

“WTJU remained predominantly staffed by students through the 1970s, 1980s and early 1990s,” he said. “After some issues with the FCC, U.Va. insisted that WTJU hire a full-time station manager to mind the store better.”

In 1993, Chuck Taylor was hired to manage the station. He began recruiting non-student DJs and staff to keep the station running when students went home during the summer.

By the time Moore was hired as general manager in 2011, most of WTJU’s on-air hosts were non-students and WTJU had transitioned from a traditional college radio station to a community radio station. Moore said one of his major goals was to increase student involvement.

“In my first couple years here, I tried a few things to increase student involvement at WTJU,” he said, “but it didn’t really move the needle very much.”

Moore began toying with the idea of building a second radio station for students, and in August 2013 – with the help of then-student WTJU DJs Corrigan Blanchfield and Hannah Patrick and a grant from the U.Va. Parents Committee – a student station was built in a spare room and occasional workspace of the WTJU’s Lambeth Commons studios.

Initially given the call sign “WTJX,” the Internet-only station started its first fall with 50 student volunteer DJs overseen by Patrick and Blanchfield, the coordinating director and program director, respectively. Since then, the station has grown to more than 120 student DJs. It has also taken steps toward initializing an FM broadcast by first applying for a low-power FM license, then receiving a construction permit to install a broadcast transmitter and antenna on a shared tower near West Main Street.

When filing with the FCC, the management of the station learned that the “WTJX” call sign was already associated with another FCC license, prompting the switch to “WXTJ.” Sara Ho, the current WXTJ coordinating director, said the change works.

“Becoming an FM station is requiring a lot of operational changes,” she said  “It’s kind of fitting that we are rebranding, if only by switching the order of our letters.”

Several more steps must be completed before the station goes live on FM, which Moore hopes will happen by the end of the fall semester. A load study of the new tower must be completed to ensure it can hold the new antenna, then a crew must mount it. Finally, an engineer must connect studio to antenna.

The station’s FM broadcast will be a huge milestone in the station’s development as a student and community organization, in part by supplementing the income of the station through the sale of underwriting spots, Blanchfield said.

“It will be a great recruiting tool, a great source of income for the station,” he said. “Everything that it contributes – from the perceived legitimacy of the station to granting the station the ability to do more both in and outside the U.Va. community – is a positive.”

In addition to on-air broadcasts, WXTJ has focused on bringing more music-related events to the University. During the past academic year, the station sponsored a concert by indie rock band Parquet Courts at The Southern Music Hall on the Downtown Mall and organized an independent show at the University Chapel by experimental artists Juliana Barwick and Grouper, both of which sold out.

“It was also a tremendous example of how a student radio station like ours can really contribute to the cultural fabric and sense of community of a University,” Moore said.

“Our mission has become a lot clearer over the past year,” Ho said. “We want to bring more diverse and interesting music to the University.”

Though WXTJ is playing automated programming during the summer, it will resume live broadcasting and begin recruiting new student DJs the first week of fall classes.