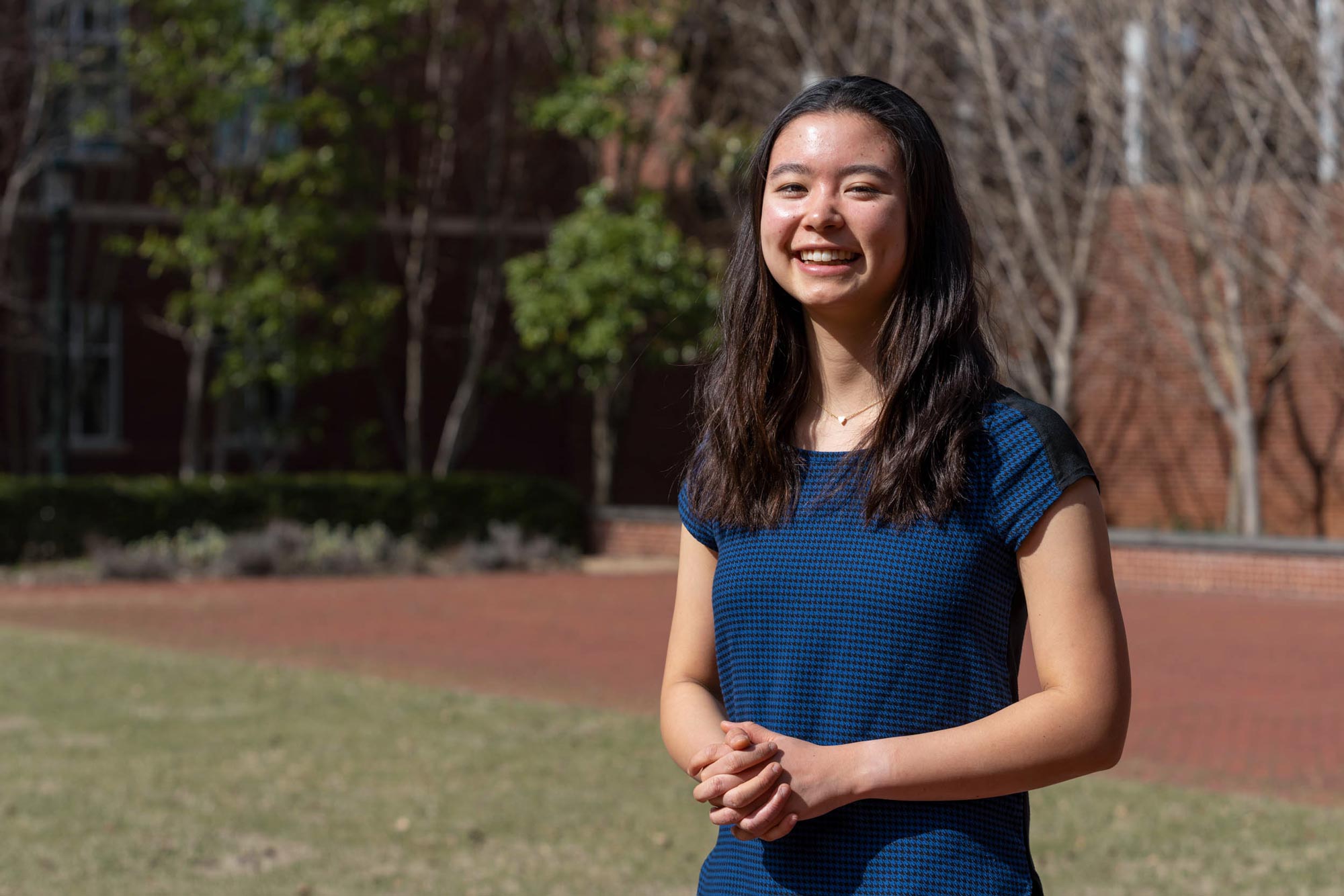 Ailene Edwards is fighting cancer with a bioprinter.

Edwards, a third-year biomedical engineering major at the University of Virginia, is doing this as a Harrison Undergraduate Research Grant recipient. Harrison grants pay up to $4,000 to a student to engage in a research project, with an additional $1,000 for a faculty mentor guiding the research.

“The human body is exceedingly complex and the way cancer cells grow, divide and metastasize is regulated by several factors,” Edwards said. “In traditional 2D cell culture, in which cells are grown on plastic dishes, it is difficult to capture the influence of factors such as other types of cells, the tumor’s proximity to blood vessels and the extracellular matrix.

“Bioprinting offers a way to generate a 3D model of a tumor that is reproducible and better mimics the conditions found in the human body. Our model places cancer cells in a core within a shell of other cell types such as fibroblasts, a type of connective tissue cell, and endothelial, or blood vessel, cells.”

The model can be used as a platform for future cancer research, Edwards said, such as studying how low oxygenation or growth factors influence cancer cell migration within the 3D tumor.

Edwards, of Blacksburg, is currently bioprinting with a human pancreatic adenocarcinoma cell line.

“They are called HPAF-II cells and are classified as an immortalized cell line,” she said. “They can be purchased through the American Type Culture Collection. However, in the future and depending on how the model is being used, it would be possible to print with patient-derived cancer cells. For example, if a tumor is biopsied, those cells could be used in the construct. Subsequently, physicians could develop a personalized treatment plan for the patient based on how the cancer cells behaved in the model in response to chemotherapy treatments.”

Bioprinting can give doctors more insight into how the cancer cells are growing and reacting.

“Bioprinting will allow us to create reproducible models of tumors where specific cell types can be positioned relative to one another in ways that mimic real tumors,” said Matthew J. Lazzara, associate professor of chemical engineering, in whose laboratory Edwards is working. “We believe that the architecture of the tumor can influence its progression.”

So how do these biological models work? Using printing nozzles or needles, the cells are extruded in the form of “bio-inks” that are a combination of the cells being utilized and  biomaterials such as gelatin and alginate. The gelatin is derived from pigs, while alginate is derived from brown algae, generally biocompatible substances. The models are tiny – about 1 millimeter in radius and less than 1 millimeter in height.

“Tumors in the body have a wide range of sizes, but might be on the order of centimeters to inches,” Edwards said. “Our models are scaled down in size in comparison to these tumors.”

The lab team is still working on achieving a stable core-shell construct, so it does not yet have data on how the surrounding cells affect the cancer cell.

“One of the primary goals of the project is to be able to consistently generate a stable, bioprinted construct of three cell types,” Edwards said. “Towards this end, we have identified cell types that are more resilient during the bioprinting process and subsequent incubation period. We have also optimized the bioprinting ink consistency and composition, and evaluated how to visualize the location of cells within the construct.”

During the research process, the team has changed the types of cells being used, the temperature at which the bio-ink is extruded and added a step to cool it down.

“The protocol changed in response to early constructs being unstable,” Edwards said. “We changed the consistency of ink to improve the immediate stability of constructs after being extruded. Originally, the ink was too runny and constructs would degrade quickly. These changes have definitely improved the bioprints, but there is also more work to be done.”

Lazzara said the student’s current work will have an impact as the technology is enhanced.

“She is working to develop a robust printing protocol that yields reproducible printed constructs so that we can begin to ask biological questions with the constructs,” he said. “We have benefitted from collaboration with colleagues at other institutions who are doing this, and we have some unique applications in mind – for example, to study the role of epithelial-mesenchymal transition in tumor progression.”

“We began trying to develop our own protocols, but we are now working to reproduce a result developed by colleagues elsewhere that is published,” Lazzara said. “Just because the protocol is published, though, does not mean that it is that easy to reproduce the result.”

Despite the complexity of the research and the difficulties she encountered, Edwards developed the confidence to continue.

“In the beginning, I was intimidated by the scale of the project and the amount of information I needed to know,” she said. “I was afraid of making a mistake or failing in some way. Through this research, I learned that mistakes are inevitable, and you can never know or anticipate everything. I learned that asking for help and taking advantage of resources available to you is absolutely necessary.”

Edwards’ interest in this technology began years ago at Blacksburg High School.

“I learned about bioprinting in high school and I was fascinated by the potential the emerging field had in improving research and medical procedures,” she said. “I was extremely lucky that when I was considering joining a lab, the Lazzara lab had an opening.”

Edwards was also introduced to the complexity of research and the processes involved.

“In doing this research, I was surprised to learn the magnitude of work that precedes even considering publishing a scientific paper,” she said. “Research never goes quite as planned, and behind a finalized results section, there are countless failed experiments and weeks spent troubleshooting.”

Lazzara said he enjoys having Edwards in his laboratory.

“Ailene is highly self-motivated and diligent,” he said. “She is creative, and she operates with ease in a lab full of graduate students. It is a real pleasure to work with her.”

A member of the Jefferson Literary and Debating Society, Edwards has worked on the Spectra Research Journal and volunteered at The Haven, a day shelter for homeless people in Charlottesville. A Rodman Scholar, she received a University Achievement Award for students who demonstrate leadership and character while overcoming personal hardship, and a Virginia Space Grant Consortium STEM Bridge Undergraduate Scholarship for second-year students.

Edwards plans to attend either medical or graduate school.