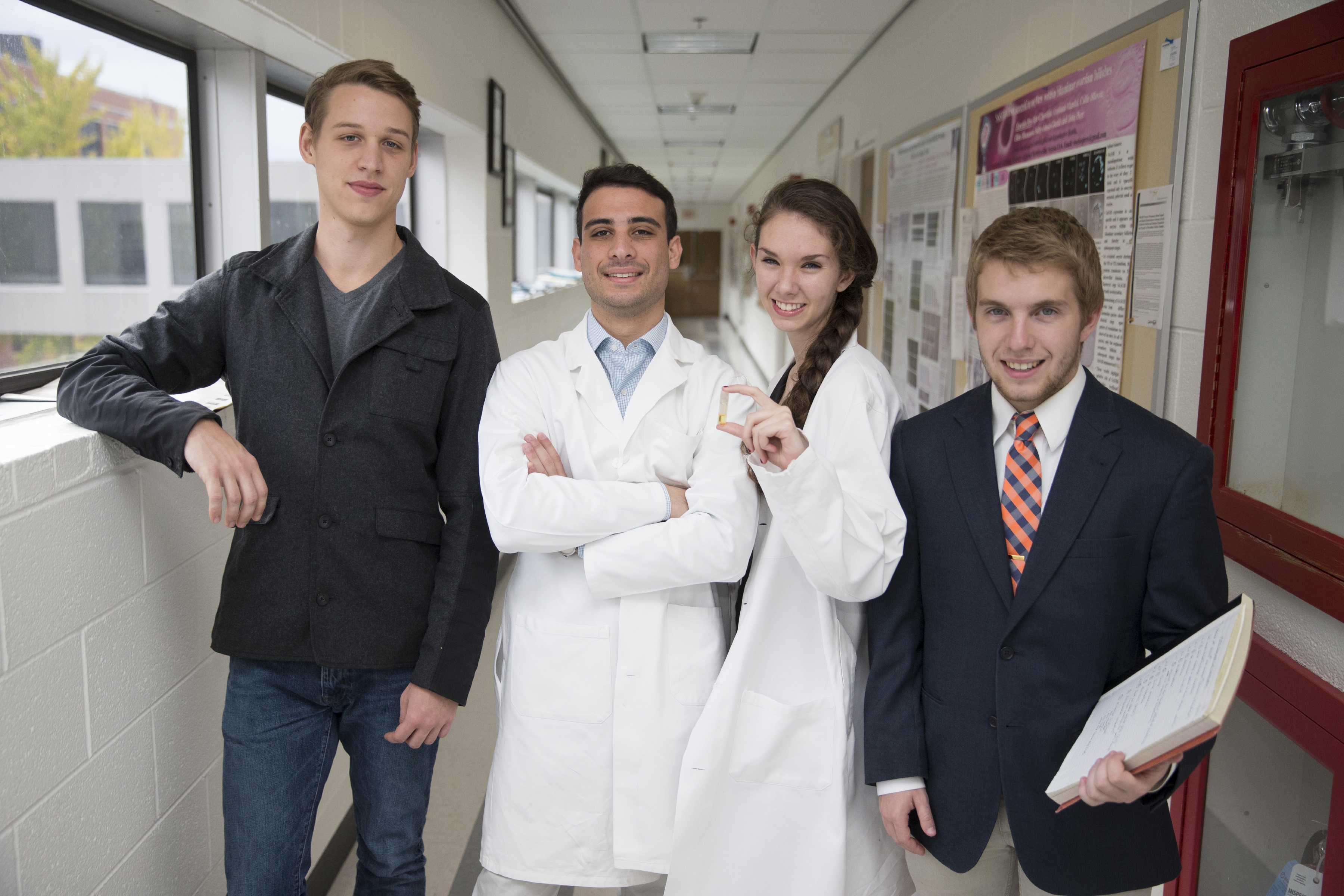 This month, a team of University of Virginia inventors will become one of only seven undergraduate groups to compete in the prestigious Collegiate Inventors Competition, to be held in Alexandria. Their proposed invention, Contraline, is a non-surgical, hormone-sparing and reversible way to neuter cats and dogs. 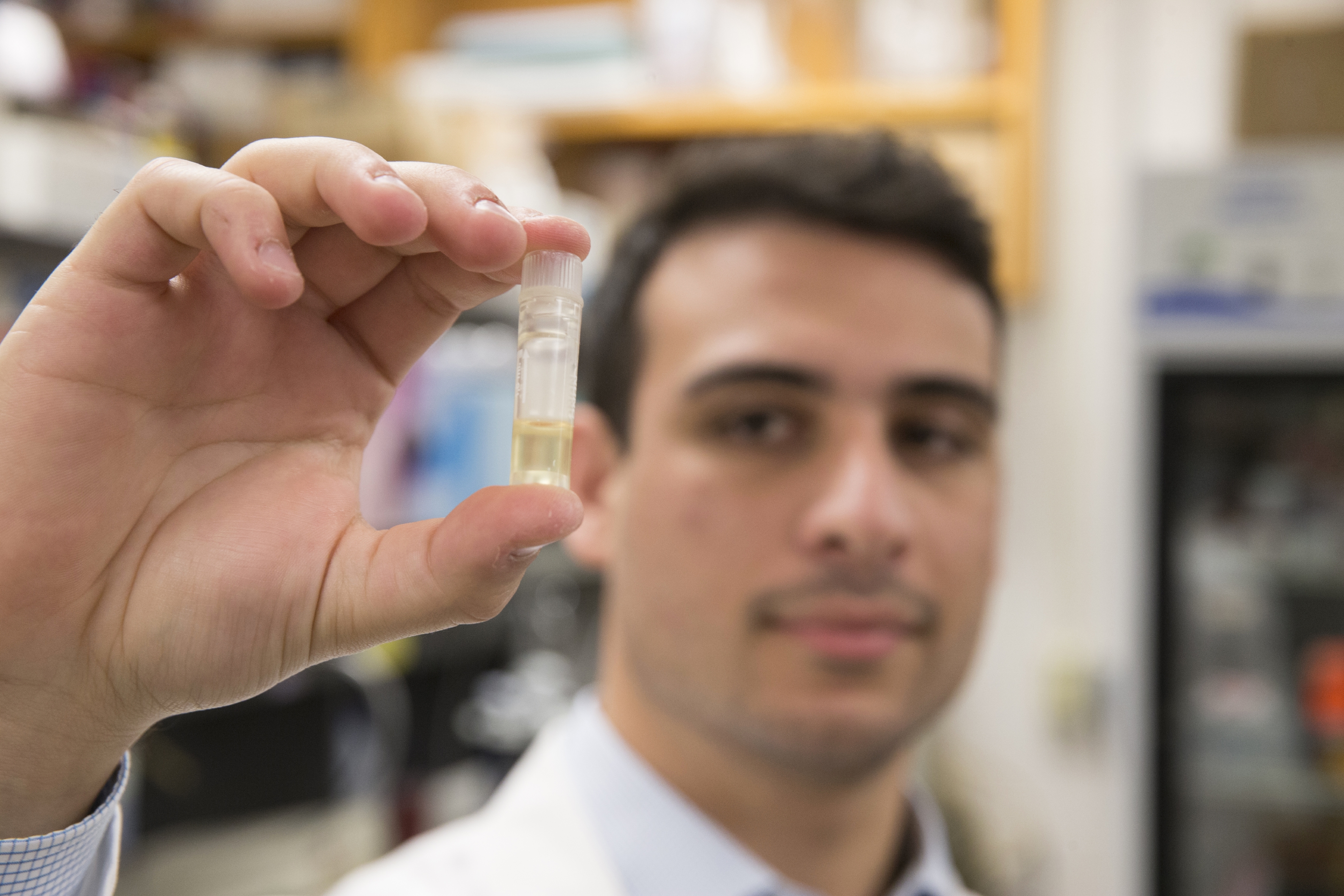 Contraline founder Kevin Eisenfrats holds a sample of the echogenic polymer gel that is basis of the non-surgical contraceptive procedure.

Contraline team founder Kevin Eisenfrats first had the idea for an alternative to traditional neutering while taking care of his family dog.

“I asked my mom why our dog Nico was neutered and she just answered, ‘I have no idea, isn’t that just what everyone does?’” said Eisenfrats, who graduated from the School of Engineering and Applied Science in May. “A spark went off in my brain then and I just thought it was a really interesting issue because neutering is so common, but it seemed like it couldn’t be that healthy for the pet.”

Curious to find out more about the full health impact of neutering and how a better alternative might be created, Eisenfrats invited fellow engineering student Nicolas Hogan to help him research.

Hogan, now a fourth-year biomedical engineering and neuroscience major, said he was surprised by the number of studies that revealed long-term health complications as a result of neutering.

“When we first started researching the problem, we were confused because there were all these papers that talked about the increased risk of cancer and behavior disorders that are associated with neutering,” Hogan said. “But often when you talk to vets they say neutering is good for the animal.”

Neutering cats and dogs is widely recommended by animal societies and veterinarians as a humane way to curb the pet population. It’s also commonly suggested as a way to calm the temperaments of overly aggressive dogs.

“Over the summer, we looked at published papers from 2011 to 2014 and the data that we synthesized suggested that for bladder cancer, prostate cancer and any cancer that has their own metastases, the risk is two to threefold if you neuter your pets,” Hogan said. “There are also a lot of issues with skeletal morphology because the bones stop developing too early and the muscles start to tear apart certain joints.”

Hogan was quick to caution that this is not the case with every animal, but it occurs frequently enough that he and Eisenfrats were surprised that the market for alternatives to neutering was still wide-open.

Contraline’s proposed solution is a semi-porous polymer gel that is injected into the vas deferens – the duct where sperm flows from the epididymis to the urethra. The procedure would block sperm and curb an animal’s fertility without removing any important tissues from its body.

“We’re working with using an ultrasound to perform the injection through the skin. It’s more like a flu shot than a surgical procedure,” Eisenfrats said.

While some other similar gels have been developed in the past, and even used in men in place of a vasectomy, Contraline’s gel is unique because of its “echogenicity” – a property that makes it visible on an ultrasound machine.

“Imagine you have a way to image a gel within a vessel using ultrasound,” said John Herr, a professor of cell biology in the School of Medicine and Contraline’s mentor. “That allows you to monitor the position of the gel, the persistence of the gel, and the longevity of the gel.”

Because the gel is monitored via ultrasound, it can easily be checked years later and flushed out should an owner decide that they wish to have their pets’ procedure reversed.

They’ve been testing the gel in the lab for several months and hope to begin testing it in model organisms later this year.

For the purposes of the Collegiate Inventors Competition, the team is focused solely on the applications of Contraline for cats and dogs, but they’ve got bigger plans for the future.

“We pivoted for a few reasons over the summer to humans,” Eisenfrats said. “Contraline’s mission now to develop the first long-lasting, non-hormonal and reversible contraception for men as a non-surgical alternative to the vasectomy.”

While performing primary market research in the i.Lab Incubator this summer, Eisenfrats and Hogan began to see the global potential of moving into men’s contraception.

“There are 1.5 billion sexually active men worldwide, and only 13 percent use male forms of contraception,” Hogan said. “The only things that are available to men are condoms and the vasectomy. It’s shocking to see how the industry is completely focused on developing female contraceptives.”

Eisenfrats added that the reason many men are turned off of vasectomies is because they are a surgical procedure.

“First, we wanted to make the procedure non-surgical,” Eisenfrats said. “Ideally, it would be a painless, five-minute outpatient procedure. Second, we want to make it easily reversible. Five to 10 percent of men who’ve had a vasectomy get a reversal, even though the procedure is three hours long, expensive and does not guarantee the ability to have kids afterwards.”

The semi-porous nature of the Contraline gel also helps reduce some of the pain and pressure associated with traditional vasectomy. Although viable sperm cannot penetrate the gel, fluid can flow through, so there is not the same kind of blockage and buildup that occurs with a vasectomy.

To keep up with their expanding research into male contraception, Eisenfrats and Hogan recruited two new team members to help with product development.

Ewel also developed a unique instrument for the Contraline injection procedure. It is a clamp that holds the vas deferens and guides the needle while the veterinarian or urologist inserts the gel.

The fourth member of the team, fourth-year biomedical engineering major Catherine Henry, was brought on to assist with plans for actually testing the product.

“I’ve been helping Kevin with some experiments, experimental design and figuring out how we can better test sperm motility, viability and concentration after going through the gel,” she said. “Currently, we are looking at how sperm interact with the gel by using fluorescence to monitor different biomarkers on the sperm membrane.”

“Really we’re just creating an all-around male contraceptive that is innovative and can work across species,” Eisenfrats said. “It’s time that men also had a safe and appealing way to control when they have children.”

The Contraline team will put its ideas to the test Nov. 17 in the Collegiate Inventors Competition at the United States Patent and Trademark Office in Alexandria. The top three entries in each division will receive $100,000 in cash and prizes.