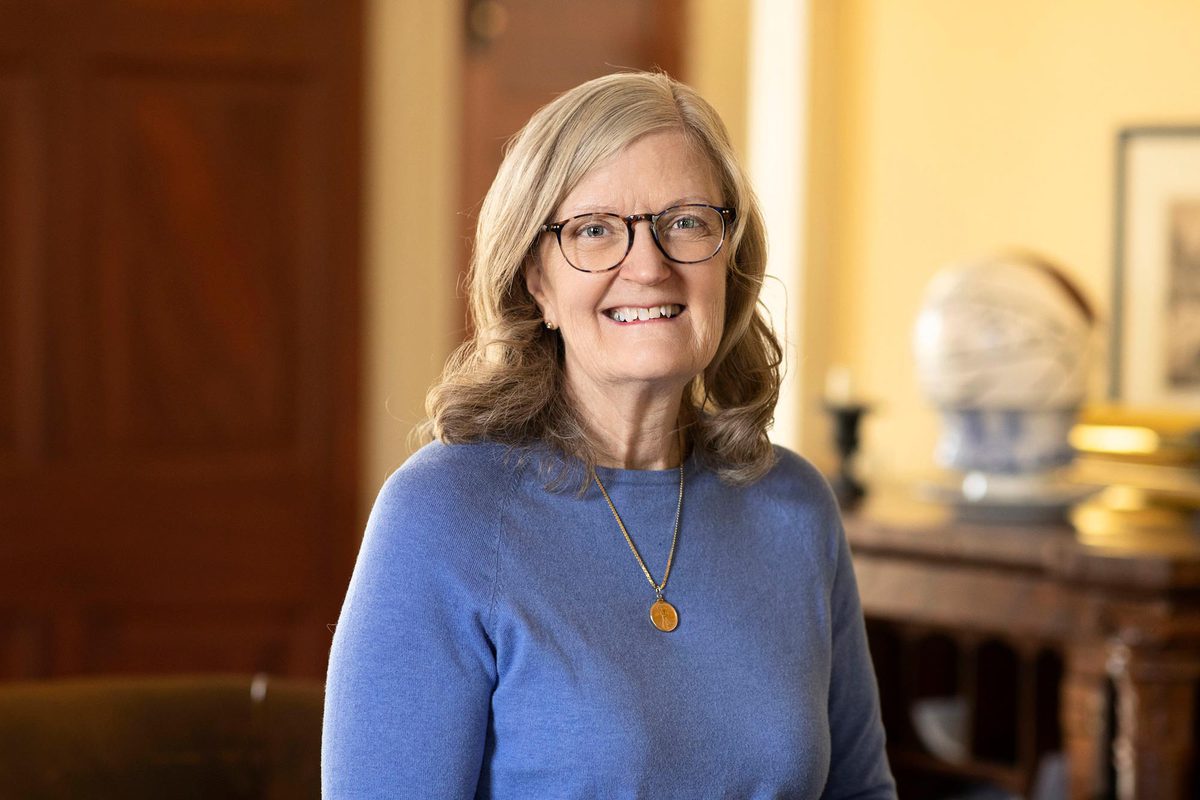 After a career that has spanned decades and witnessed a millennium of change at the University of Virginia, Patricia M. Lampkin announced this month that she plans to conclude her tenure as Chief Student Affairs Officer.

In all, Lampkin has spent some 40 years in higher education at UVA, including the last 18 as vice president. Although she targets August for her official retirement, Lampkin assured President Jim Ryan that she would continue in the leadership role until her successor is in place.

“I have had a long and rewarding career in Student Affairs, and I can honestly report that I have enjoyed almost every moment, both the good and the challenging,” she said in a message last Thursday to colleagues. “It is time, however, to turn over the reins to a new generation of SA leadership.”

During a conversation later that afternoon in Pavilion V, where she and her husband Wayne Cozart live, Lampkin described her time here as immensely rewarding and professionally satisfying. True to form, she redirected credit to students, who maintain the University’s foundational system of student self-governance, her colleagues and faculty members.

“This is about how others succeed,” Lampkin said of student affairs work. “You get your rewards through experiencing that.”

The decision generated an outpouring from colleagues, friends and students – and from Ryan, who said he tried his best during recent months to convince Lampkin to stay.

“Her legacy will include, among many other accomplishments, creating more opportunities for student leadership development, helping make the expanded Student Health and Wellness Center a reality, strengthening our system of student self-governance, assembling a terrific team in Student Affairs, mentoring colleagues across the University, and handling a long line of crises – both large and small – with compassion and care,” Ryan said.

Maurice Apprey, UVA’s Dean of African American Affairs and a member of Lampkin’s leadership team, characterized her approach as “low profile juxtaposed with high impact.” He cited numerous examples of changes over the years that have strengthened student self-governance and enhanced the student experience.

From among a lengthy list: the creation of the University Board of Elections two decades ago to improve the system of Student Council elections, and the establishment in 2014 of the Meriwether Lewis Institute for Citizen Leadership, which provides students leadership-building experiences and instruction.

“Every summer, after seeing students’ final presentations that she and others have made possible, I think the following: ‘This is why we do Student Affairs – to enable minds to explode in magical and yet unpredictable and creative ways,’” Apprey said.

University Dean of Students Allen Groves first worked with Lampkin as a law student in the late ’80s when he was an area coordinator for a set of Alderman Road residence halls. He credited Lampkin for motivating his 2007 decision to return to UVA for his current role, and particularly praised her “highly practical and refreshingly non-ideological” approach.

Lampkin is “very focused on the impact a decision may have on students and whether their voice has been given sufficient weight in the process,” Groves said. “Pat always asks if something we’re considering is consistent with UVA’s values and if it advances UVA’s academic mission.”

An Illinois native, Lampkin arrived on Grounds in 1979, and earned her doctorate in education in 1986. The following year she was named associate dean of students for residence life. Her UVA career has included service as compliance officer for the Americans with Disabilities Act, and as associate vice president for student affairs before being named Chief Student Affairs Officer in 2002 (after serving 15 months in an interim capacity).

Mirroring society in general, the University experience during those years included remarkable advances and sorrowful crises both of individual loss and of communitywide trauma. Lampkin radiates admiration for how students and the University community consistently respond – and grow – along the way.

“Our students have always saved us in crisis. Their voices are always authentic,” she said.

Lampkin’s support and partnership with them made an impression over time.

In 2004, third-year Meghan Sullivan won election as chair of the Honor Committee and found herself bearing the mental weight of policy and operational responsibilities for the institution’s 200-year-old student justice system.

“Pat is a living example of what it means to love and trust the students you serve and to have a relentless vision for the people they are capable of becoming. ”

She found that Lampkin was not about to tell her what to do. Instead, the two met weekly, talking through problems and issues in a mentoring relationship – embodying the ideals of UVA’s student experience, focused on giving students “tremendous responsibility and then devoting tremendous amounts of time and care to raising them up to the challenge.”

Though a scholarship student, Sullivan struggled personally and financially. When Sullivan was invited to a Rhodes Scholarship interview, Lampkin helped the young student buy her first interview suit.

“More than that, she made me feel confident enough to wear it into one of the toughest interview rooms in the country,” she said.

Sullivan was selected as a Rhodes Scholar, graduated with a double major from UVA, earned a Ph.D. from Rutgers University and today is a full professor of philosophy at Notre Dame University, and director of the Notre Dame Institute for Advanced Study.

“Pat is a living example of what it means to love and trust the students you serve and to have a relentless vision for the people they are capable of becoming,” Sullivan said.

Politics professor Larry Sabato has known Lampkin since her UVA arrival, and has admired the selfless approach that remained a constant during those years.

“The students have no better friend than Pat,” he said last week. “Time and again, I have seen her go the extra mile for the student body as a whole as well as for individual students. She solves more problems in a day than most of us do in a month, and that’s not an exaggeration.”

Lampkin said the Student Affairs function will continue to thrive beyond her time in the office, even if her colleagues lament that it won’t be the same. The University, she said, has a 200-year history of pursing its mission to help people grow into leaders who learn through experience how to navigate life’s winding paths.

“Students change so much but at their heart they are still 18-year-olds,” she said.

In 1999, Lampkin spent an academic year working with others on “Virginia 2020,” a long-range planning initiative meant to prepare UVA for serving the needs of the future – for the needs of today, as it turns out. In a 49-page report authored by Lampkin and titled “The Student Experience at The University of Virginia,” she articulated a guiding principle.

“We remain dedicated to creating educated citizens,” she wrote. “But we can only accomplish our mission by following a two-pronged approach: preserving our core values while seeking new strategies to meet the challenges of a changing educational and cultural landscape.”

Last Thursday, Lampkin seemed genuinely surprised by and clearly appreciative of the messages she was receiving after word of her retirement decision began to get around. The search process for her successor is expected to launch in the coming weeks.

Outside the Pavilion door, students streamed across the Lawn as they headed to class or other destinations under the bright sun. Lampkin was reminded again and again throughout her time on Grounds that taking a few steps to the Lawn and interacting with those students would energize her day and refocus her on the mission.