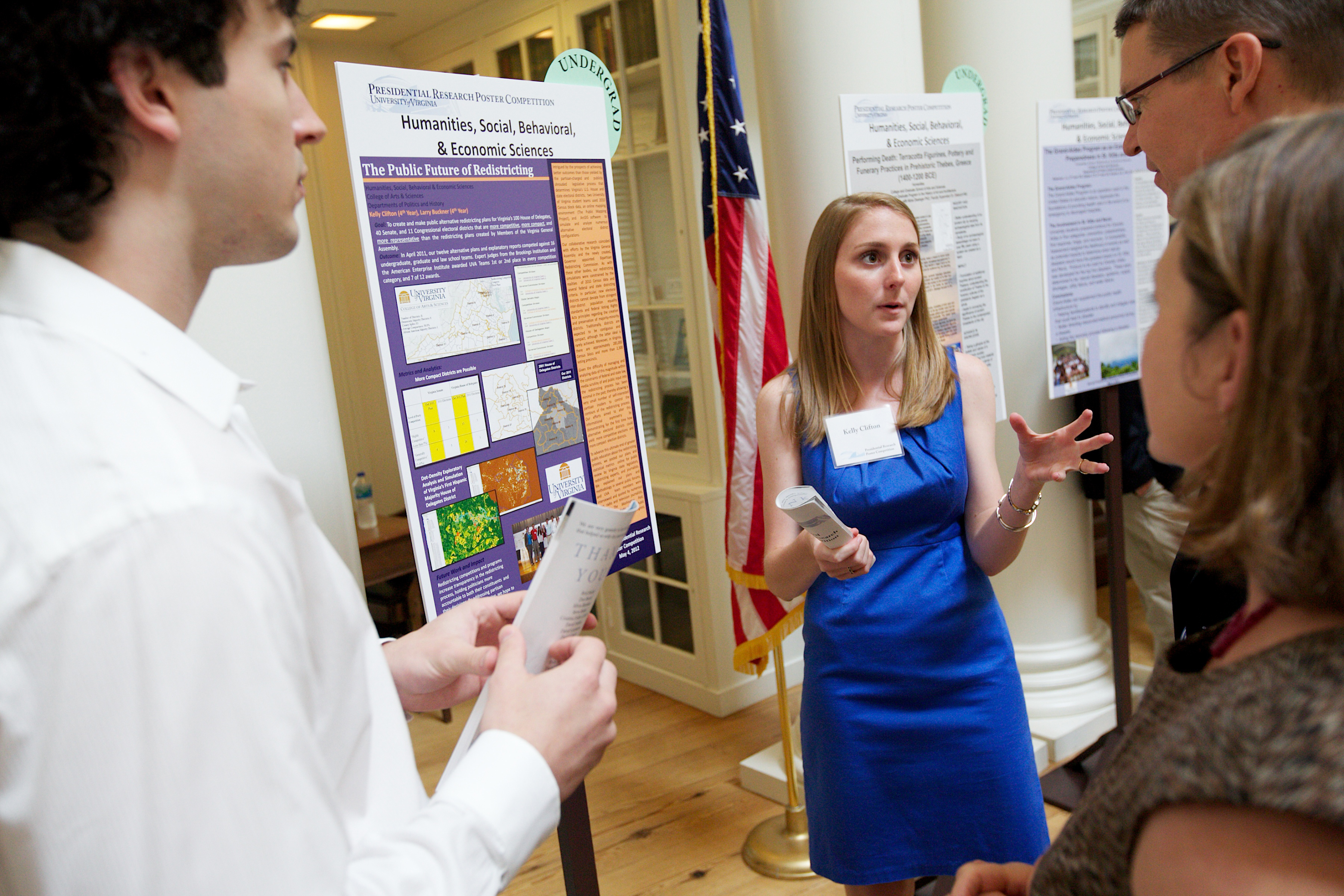 May 7, 2012 — University of Virginia student researchers offered unique perspectives on the physical, legal and political worlds Friday as they presented their findings in the second annual Presidential Research Poster Competition at the Rotunda.

A walk around the room revealed an impressive breadth of projects. Student projects ranged from a new chair design to ancient burial rites to political redistricting.

Jeremy Andreatta, a postdoctoral student in chemistry, is part of a team working on finding a method of liquefying methane gas to methanol through the insertion of an oxygen atom into the methane structure so it can be used as a liquid fuel. Andreatta said while there is an abundance of methane in the country, the general energy infrastructure is designed to transport liquids, such as gasoline and diesel fuel. He said his team is working on one small aspect of the overall problem.

"It's fundamental research," he said "We are trying to identify a few key steps."

Andreatta is part of the Center for Catalytic Hydrocarbon Functionalization with 10 principal investigators and about two dozen graduate students.

Third-year School of Architecture student Allen Merced-Figueroa is also investigating an energy issue. He is part of a team studying the energy systems in brand-new Rice Hall, examining the efficiencies of lighting and heating in different spaces.

"We're looking at the whole process of optimal occupancy comfort," Merced-Figueroa said. "We were able to get the perspective of the contractors, the heating and air conditioning people and the engineers involved."

Fellow team member Ramit Garg, a fourth-year systems engineering major in the School of Engineering and Applied Science, said they have been gathering data and have only recently started analyzing it.

"We compare the temperature, the carbon dioxide emissions, the lighting set points versus the actual temperature," Garg said. "All together they are more efficient, but we have not compared space to space."

Georgia Broaddus and Callie Warrenton, both fourth-year architecture students, were also concerned with space. They re-envisioned a table and chair, designing and building a cube-like contraption that can function as a table, and, when sat upon, a contouring chair. Or it can be a combination of table and chair.

"This was a design exercise," Broaddus said. "As architecture students, we usually work on a smaller scale. We rarely get to work a one-to-one scale."

Broaddus and Warrenton have named their creation "[Re]Bound," because it bounds back to a table after the person sitting in it stands. They are examining various applications for the [Re]Bound in public places, where it can stand alone or be linked with others. They have applied for a patent pending and are taking "[Re]Bound" to design competitions.

While some students worked in the realm of the physical, others had more intellectual pursuits. Second-year psychology graduate student Elizabeth Gilbert in the Graduate School of Arts & Sciences stepped into the legal world to examine how a person's level of knowledge contributes to their perceived control over their environment in legal cases. Gilbert said that the intuitive belief that people with more knowledge have more control over their surroundings can skew court findings and said her research could be used to write more specific jury instructions in legal cases.

"Analyze the cause of an action first, then look at what goes on in the person's head," she said. "This can help jurors better apply the law."

Dylan Rogers, a graduate student studying art history and archeology in Arts & Sciences, looks at other outcomes, studying life and death in ancient southwest Turkey; specifically, he's analyzing the elements of a specific burial site in use from the fourth to the seventh century. Rogers' forte is examining floors and what they can tell future generations about the people who walked upon them.

"The mosaic on the floor indicates this is a tomb for a bishop and that this is an important site," he said. "I look at floors because they are what we walk on. They are always there."

"Bipartisan redistricting is a different way of doing it," Buckner said. "It's a matter of getting the politicians on board."

The competition was divided into six categories, which were again subdivided among undergraduate, graduate and postdoctoral fellows. Teams of judges roamed the room, talking to presenters and assessing their projects. University President Teresa A. Sullivan handed out ribbons to the winners in each category.

More than 130 posters were entered. Here's the complete list of winning projects with names of one team member for each: