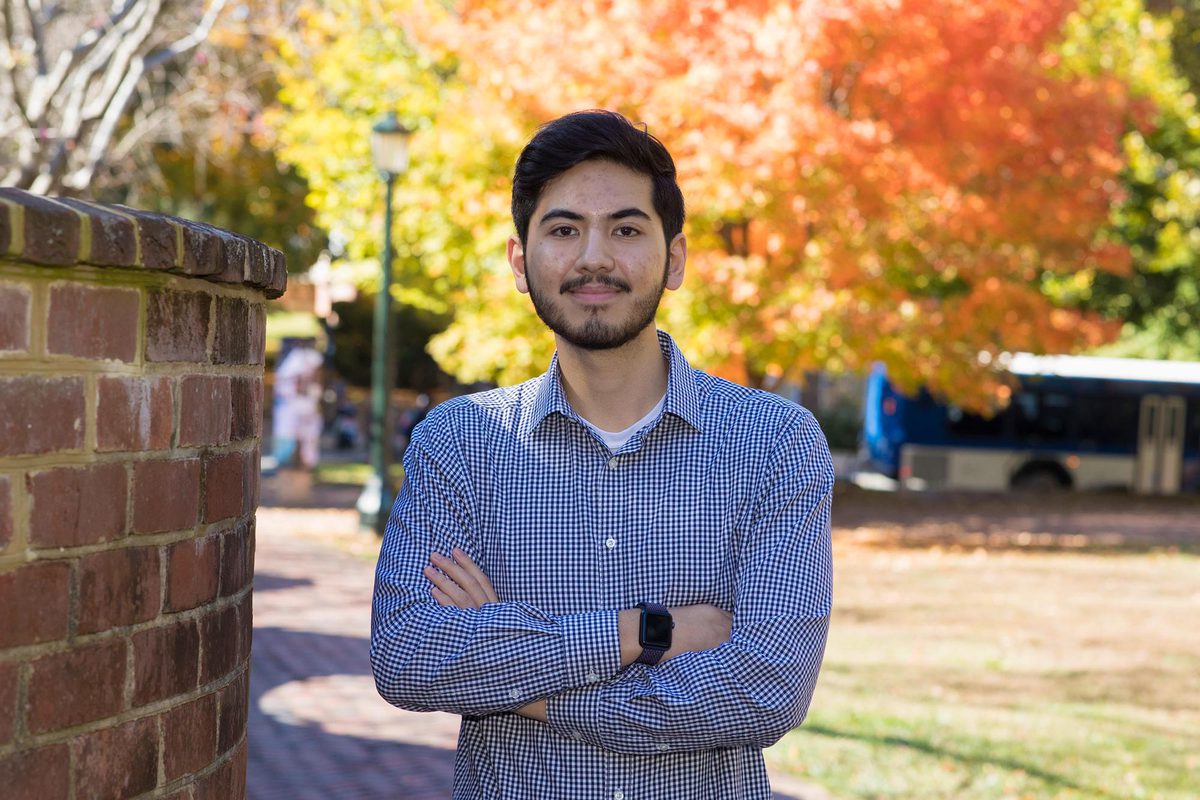 If you ask fourth-year University of Virginia student Misran Dolan what UVA’s Democracy Initiative means to him, he might point you to sporadic messages from his extended family.

Dolan and his family are Uyghurs, part of a Turkic minority ethnic group that have faced increasing persecution in China’s contested northwestern territory, referred to as Xinjiang or, by many Uyghurs, as East Turkestan. Dolan’s parents and his two older sisters immigrated to the U.S. right before he was born, but many other family members remained.

According to reports from The New York Times and other major publications, arrests, interrogations and imprisonments of Uyghurs in the region have increased sharply over the past few years. In 2018, China Human Rights Defenders estimated that more than 1 million Uyghur Muslims have been detained in or forced to attend “reeducation” camps in the region, ostensibly intended to eradicate terrorism; many more face extensive surveillance and interrogation aimed at forcing Uyghurs and other minorities to conform.

For Dolan, an economics and computer science major from Northern Virginia, the threat can feel far away at times as he and his family practice their culture freely in the U.S. Still, each time he goes to a Uyghur wedding, or celebrates the dawn of the new year, he remembers the many others who cannot celebrate freely.

“I am trying to utilize all of my resources and abilities to preserve this Uyghur culture in the U.S. while raising awareness of the threats in Turkestan and China,” Dolan said. “People need to understand the severity of this issue. … A lot of language refers to political reeducation camps, but it’s more serious than that. Once people get sent to these camps, they have no contact with the outside world and no idea when they will return. There are accounts of people being tortured, and satellite images of cemeteries being built outside these camps.”

Now, he is spreading that awareness through the Democracy Initiative. Dolan is one of 18 student researchers currently involved in the initiative’s Religion, Race & Democracy Lab, which runs courses, research projects and even a “Sacred and Profane” podcast drawing attention to how race and religion affect the spread of democracy worldwide.

Led by UVA’s College and Graduate School of Arts & Sciences and the University’s nonpartisan Miller Center of Public Affairs, the Democracy Initiative launched last year to bring together a wide variety of scholars, from undergraduates to professors, studying the most critical challenges to democracy today. Its labs – three-year thematic projects undertaken by research teams of faculty and students – are producing work aimed at a broad public audience, such as the podcast that Dolan is a part of. Labs are established through a competitive proposal process; other labs are focused on corruption, democratic statecraft and media. Dolan's and other undergraduate research projects are funded by The Jefferson Trust.

“We are asking students and faculty to research an issue, a text, a person or a situation that examines the complex interrelationship between religion, race and democracy,” religious studies professor Martien A. Halvorson-Taylor, the lab’s co-director, said. “Our students bring incredible perspective, because they each have traction in different communities that allow them insight and entrée into this work, as Misran does in the Uyghur community he is part of.”

For his project, Dolan interviewed anyone he could find who could offer perspective on his subject, including an American man who spent a decade in Turkestan and a translator who participated in congressional hearings with Uyghurs who fled reeducation camps. He also spoke with Sophie Richardson, the China director at Human Rights Watch and a UVA graduate. Richardson has testified before the European Parliament and U.S. Congress and provided commentary to numerous media outlets.

“It was so valuable to talk with her, and I think the UVA connection really helped,” Dolan said.

Dolan has also done a lot independent research on Uyghur history and culture, which he describes as more closely tied to central Asia than to China.

“We are not related to, or included in, Chinese culture, but more closely aligned with central Asian countries like Uzbekistan or Kyrgyztan,” he said.

Since starting his project, he has gotten involved in lobbying efforts for the Uyghur Human Rights Policy Act, introduced by U.S. Rep. Christopher Smith in January to direct U.S. government agencies to prepare reports on China’s treatment of Uyghurs and protect ethnic Uyghurs and Chinese nationals in the U.S. The bill has been referred to the House’s Subcommittee on Crime, Terrorism and Homeland Security.

“I’ve talked to representatives from Virginia and Maryland about voting on the bill, and gotten to meet so many interesting people, including many other Uyghurs,” Dolan said.

He’s also picked up some podcasting and research skills that will come in handy for years.

“It’s been different from my majors [economics and computer science] and I have learned a lot about the methods of journalism, something I have never done before,” he said.

He particularly enjoyed a workshop the Religion, Race & Democracy Lab hosted about how to tell a compelling story through audio.

“We learned a lot about framing the podcast, building the story and the more technical background,” he said. “It was really great.”

Halvorson-Taylor said those skills are an important part of the lab’s mission.

“We really want to train our researchers in the art of public writing and speaking,” she said. “They get experience working with audio and film, and come away with hard skills they can apply in the future. And, they do not have to be within any one major – it really allows students to synthesize their interests.”

Students and faculty members in the Religion, Race & Democracy Lab are researching a variety of topics, from studying sacred places in Nigeria to nearby Native American tribes in Virginia. The podcast – which will release a second season soon – has episodes exploring a code of ethics written by an ancient Indian emperor, the 25th anniversary of the genocide in Rwanda, natural gas extraction in West Virginia and the plight of an Iraqi refugee named Hassan.