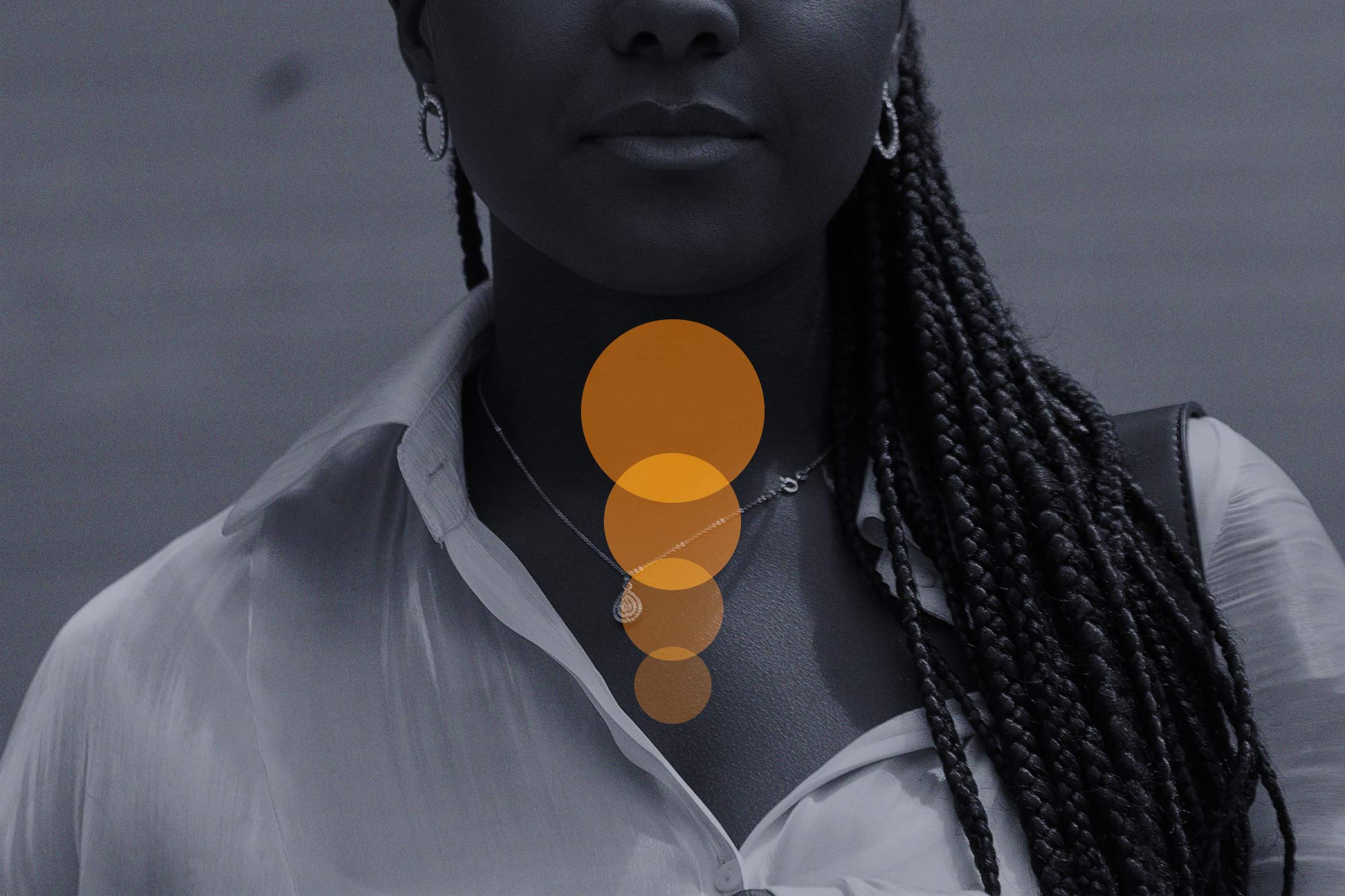 The average human swallows 500 to 700 times a day. Imagine if each of those swallows was a struggle.

For many who suffer from esophageal motility disorders like dysphagia that affect the way the muscles in the esophagus deliver food and liquids to the stomach, the act of swallowing can be difficult or even painful. It can turn something as simple as a sip of water into a violent fit of coughing.

Brought on by conditions like gastroesophageal reflux disease, or GERD, degenerative diseases like Parkinson’s disease, and even just old age, these disorders can lead to problems like dehydration, malnutrition, pneumonia and choking, and it affects the quality of life of approximately half a million Americans every year and as many as one in five individuals over the age of 50.

The causes of these conditions are not well understood by medical science, but a study published this month in the journal Cell Reports by a team of scientists from the University of Virginia’s College and Graduate School of Arts & Sciences and UVA’s School of Medicine identifies the unique genetic fingerprint of the nerve cells that govern the motor function of the esophagus. According to the scientists involved, this opens a new avenue of approach to the treatment of esophageal motility disorders that could lead to new therapies and new pharmaceuticals, offering hope to those who live with the debilitating effects of dysphagia and other disorders affecting the esophagus.

The study, led by doctoral student Tatiana Coverdell, began as an attempt to identify the neural pathways from the brain that control heart rate. The human body contains a complex array of neural pathways that connect the brain to each of the body’s organs, and much about how these pathways are organized and function is still not understood. 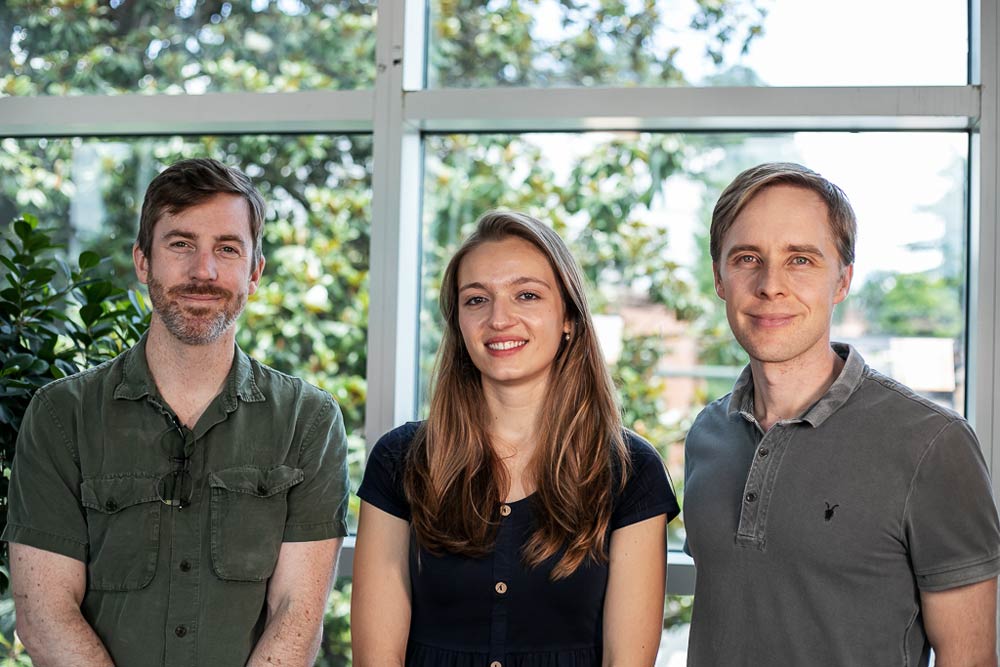 From left, molecular neuroscientist John Campbell, doctoral candidate Tatiana Coverdell and pharmacology professor Stephen Abbott have discovered a neural pathway from the brain to the esophagus that could improve treatment of esophageal motility disorders. (Photo by Molly Angevine)

Coverdell and her co-authors – John Campbell, a molecular neuroscientist and biology professor with the College, and Stephen Abbott, a pharmacology professor with UVA’s School of Medicine – were focused on a region of the hindbrain in the lower part of the brainstem called the nucleus ambiguus. Previous studies have suggested that the nucleus ambiguus is connected by nerve projections to the heart, the larynx, the pharynx (which carries air, food and fluid down from the nose and mouth) and the esophagus, controlling how they function. In the process of looking for a specific pathway to the heart, they discovered a particular neuron subtype that controls axons, or nerve fibers, leading to the esophagus, which, when activated, causes esophageal contractions.

“A lot of our projects begin with generating a parts list for a particular region of the brain,” Campbell said. “We want to know all the different cells that make up that region and what they do, and we profile their gene expression to identify them. To figure that out, we look at where each cell type sends their axons because that tells us what organ it controls. That’s how we ended up down this road.”

Current therapies for esophageal disorders involve stimulation of the vagal nerves, the main nerve system that controls body functions referred to as “resting and digesting” that can’t be consciously controlled. However, that pathway also controls a wide range of other functions like cardio-respiratory and digestive functions, and these therapies can create a variety of unwanted effects.

“The vagus nerve is a superhighway of information between all of your visceral organs and your brain, and these motor neuron axons are found within that,” Campbell said. “But when you stimulate that, you’re activating everything: all these different pathways between the brain and the other connected organs. Having a more targeted approach to affect just esophageal motor function would allow these therapies to be more precise.”

Campbell and Coverdell realized that their findings could have practical clinical applications, and they reached out to neurophysiologist Stephen Abbott to help them characterize the function of the cells they discovered.

“The discovery has a lot of clinical significance, because it allows us to more specifically target the esophagus rather than targeting the entire region and having a lot of off-target effects,” Coverdell said. “Future research can look at this and develop more targeted therapeutics for disorders of swallowing.”

“We now have a complete gene expression profile for these esophageal motor neurons,” Campbell added. “We know all the receptors that they express, all the neuropeptides and other signals that they express – any of these could be pharmacological targets in treating esophageal motility disorder. It also gives us access to the whole neural circuitry that controls swallowing. So, we can work backward from these neurons that control the contractions of the esophagus, and that will give us a complete picture of how the swallowing program is represented in the brain.”

Abbott agrees that the discovery will have significant implications for the field of medicine, especially as the U.S. population continues to age.

“The ability to identify and study the nerve cells controlling esophageal function allows us to study issues of esophageal motility disorders, and we hope this will promote improved treatments for these disorders that are prevalent in the elderly,” Abbott said. “We have all the possibilities in front of us now that we have this information.”

According to Deborah Roach, chair of the College’s Department of Biology, the findings are important evidence of the role cross-disciplinary research is having in advancing the boundaries of both science and medicine.