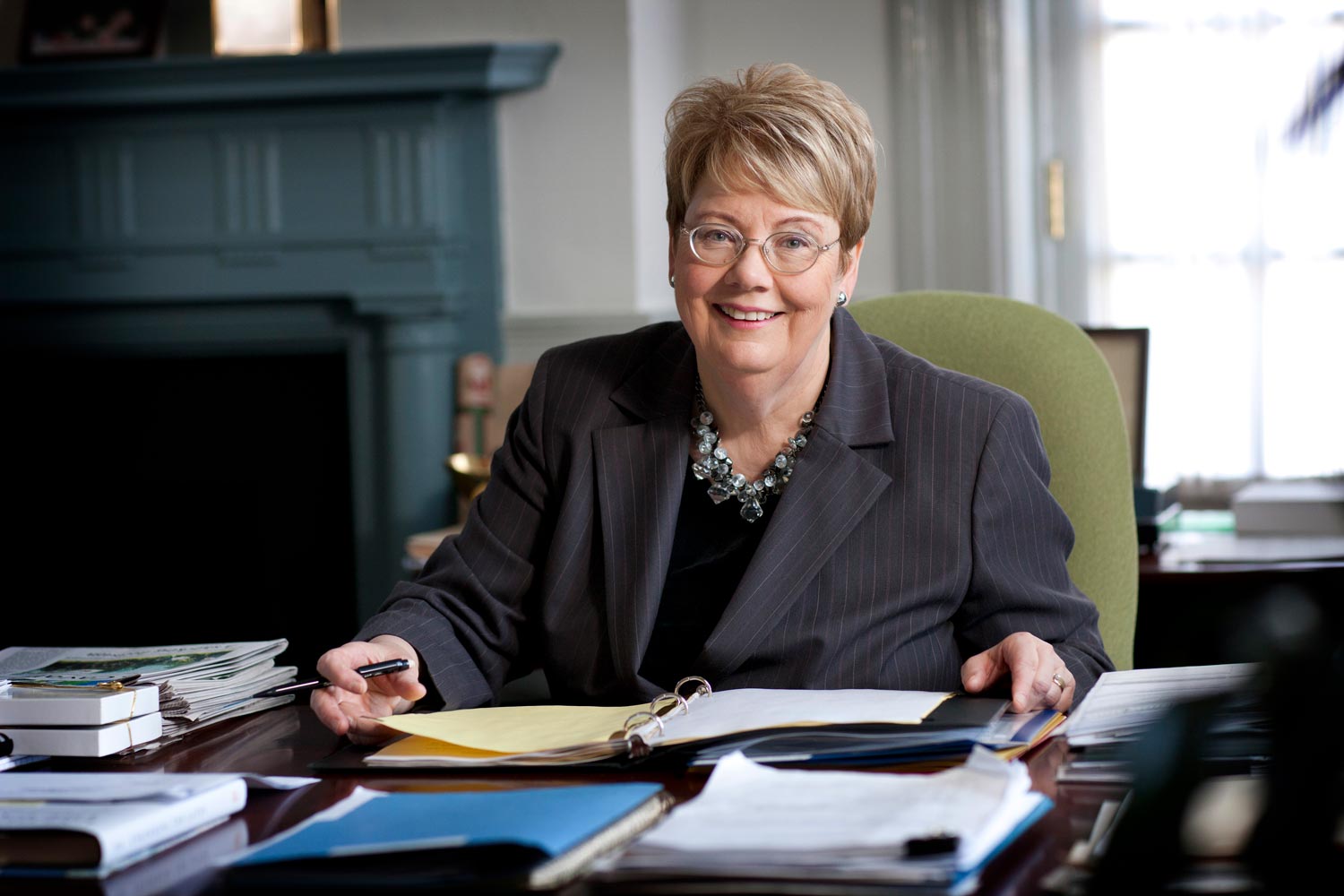 Continuing a University of Virginia tradition, outgoing President Teresa A. Sullivan will deliver the commencement address at the 189th Final Exercises on May 19 and 20.

Sullivan, who will step down this summer, will speak on the Lawn both days following the traditional academic procession, which begins at 10 a.m. Students from the College and Graduate School of Arts & Sciences will graduate on May 19. Students from all other schools and the Data Science Institute will participate on May 20.

Valedictory Exercises, which features presentation of the class gift and University and class awards, is scheduled for May 18. Its speaker has not yet been announced.

“The Final Exercises ceremonies are joyful occasions, and participating with our graduates and their families is one of the greatest pleasures of being president,” Sullivan said. “I’m honored to be the commencement speaker for this year’s ceremonies, and I look forward to celebrating this significant moment in our students’ lives in May.”

As president, Sullivan already fulfills an important role in Final Exercises. For students wearing caps and gowns, it might be the most significant role: The president officially confers degrees to graduating students as part of the formal program for Final Exercises.

Sullivan took office in 2010 as the University’s eighth president, and the first woman to hold that office.

She will be succeeded by James E. Ryan, a School of Law graduate and former faculty member who currently serves as dean of the Harvard University Graduate School of Education. The Board of Visitors announced Ryan’s appointment in September; he will formally take office Oct. 1.

The opportunity to deliver the commencement address reflects a tradition at UVA for outgoing presidents. In 2010, then-President John T. Casteen III was the graduation speaker as he neared conclusion of a 20-year tenure as president. In 1990, outgoing President Robert M. O’Neil delivered the graduation address. Other University presidents delivering Final Exercises addresses as their tenures concluded were Frank L. Hereford Jr. in 1985, Edgar F. Shannon Jr. in 1974 and Colgate W. Darden in 1959.

During her tenure as president, Sullivan has broadened the diversity of the student population, implemented a new strategic plan, grown UVA’s research portfolio, prioritized efforts to address generational turnover among faculty and guided the successful conclusion of a $3 billion capital campaign. She has championed safety and quality as hallmarks of patient care at the UVA Health System.

As the University neared its bicentennial, Sullivan launched the President’s Commission on Slavery and the University to explore and report on UVA’s historical relationship with slavery. That effort has significantly increased the University’s understanding of the legacy of slavery, with research and instruction ongoing. It also led to the recommendation to establish a Memorial to Enslaved Laborers, which will be constructed on Grounds east of Brooks Hall across from the Corner. The Board of Visitors approved the memorial’s design in June.

Sullivan also led preparations for the University’s bicentennial celebration, which began in October. In anticipation of its 200th anniversary, the University re-opened its centerpiece Rotunda in 2016 after a two-year, $58 million renovation that included significant repairs and upgrades to the interior, exterior and landscaping. The project expanded classroom space in the building, and included installation of new marble capitals above the Rotunda’s exterior columns, as well as a new dome and oculus.

Sullivan, a sociologist, is a scholar in labor force demography and the author or coauthor of six books and many scholarly articles.

She is a graduate of Michigan State University’s James Madison College, and earned her doctoral degree in sociology from the University of Chicago.

She is married to Douglas Laycock, the Robert E. Scott Distinguished Professor of Law at UVA. They have two adult sons.