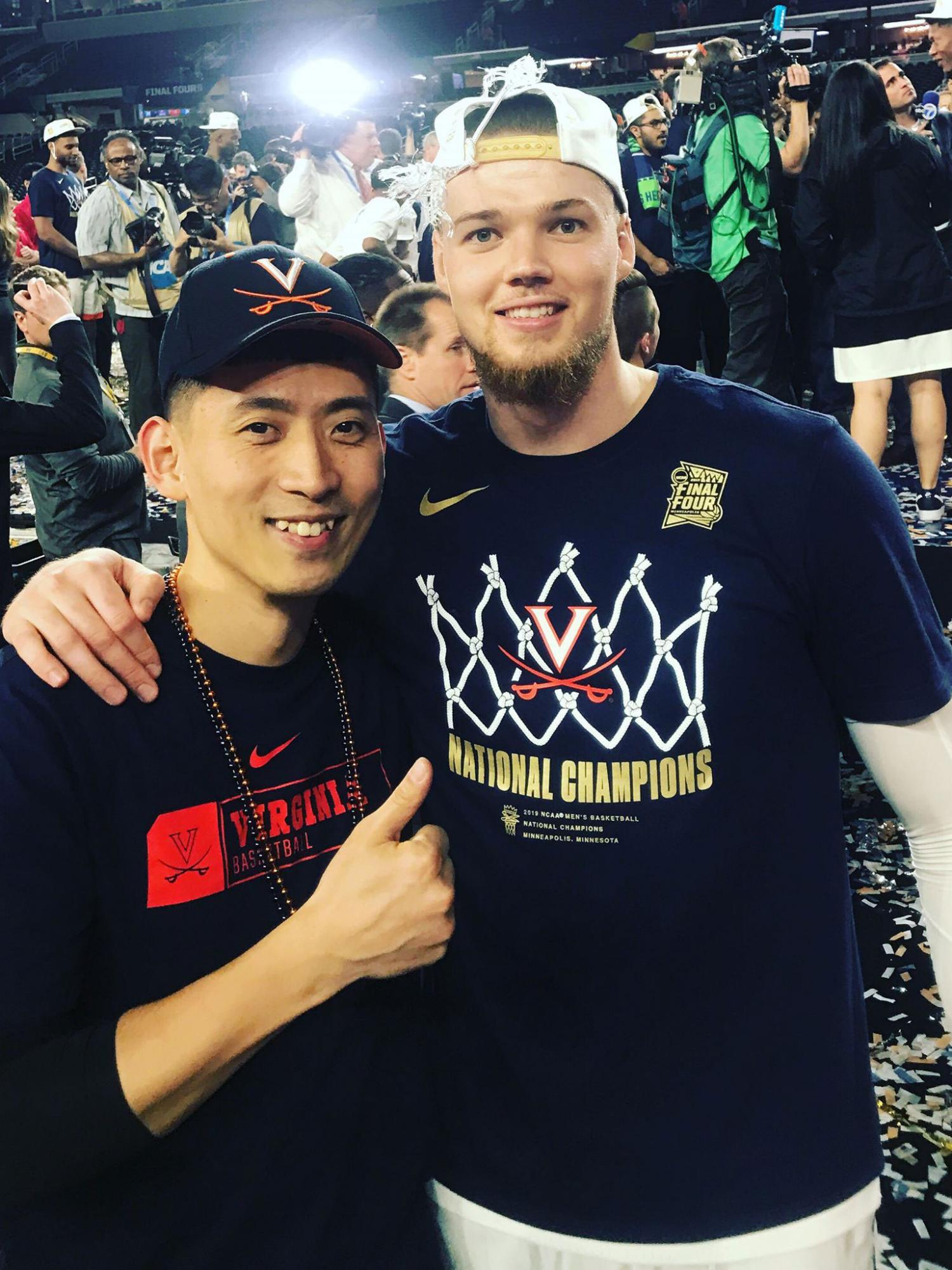 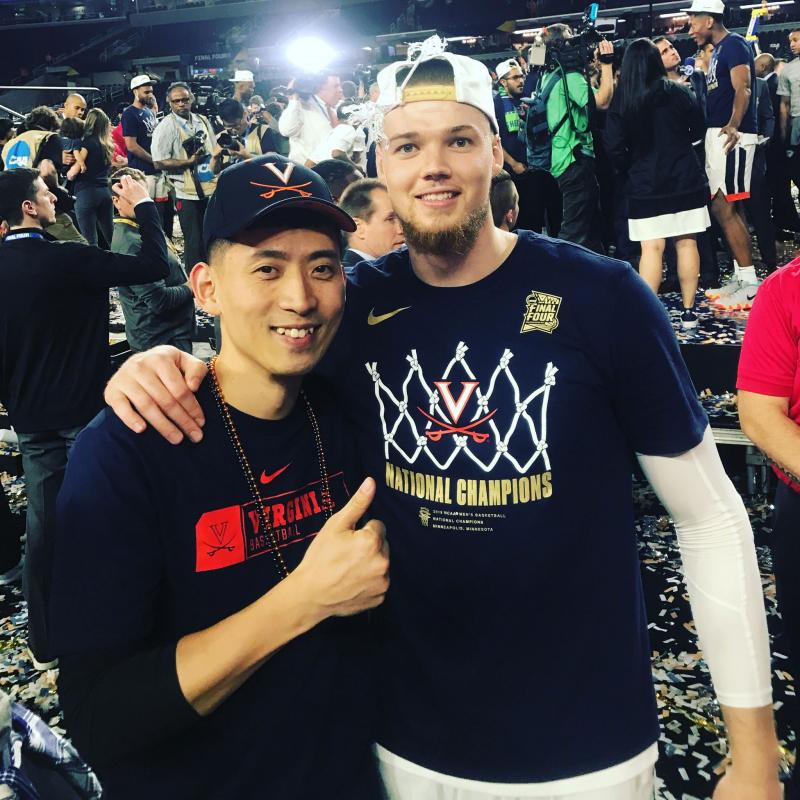 Mike HongKei Sy, Jack Salt’s friend and biggest fan, reached out to the UVA community for help finding a place to stay in Minneapolis. He found an outpouring of support from Wahoo basketball fans and the alumni couple who put him up in their home.

Thousands of University of Virginia men’s basketball fans flooded Minneapolis for the Final Four, but we think we’ve found the Cavaliers’ biggest fan – and it’s a guy from Macao.

Mike HongKei Sy’s adoration for the team is not random. His story goes back six years, to a Nike-sponsored basketball camp in Guangzhou, China, where he served as a translator. There he met a 17-year-old New Zealander named Jack Salt. Sy, then 29, said he was immediately taken by Salt’s athletic prowess and his integrity.

He remembers one game vividly. “Jack had a super-tough battle with another center from China,” who would go on to be the camp’s most outstanding player, Sy recalled via Facebook Messenger. “That kid played extremely physical.”

Ultimately, Nike management “had to step up and tell the refs to control the game,” Sy said. The Chinese player “pushed and elbowed Jack so many times, yet Jack kept his composure and kept playing the right way and his team won the game.” 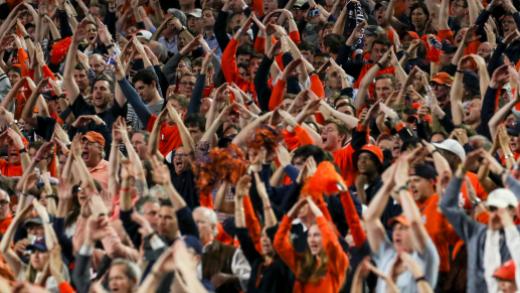 Minneapolis Memories: 4 Groups of Hoos Share What the Game Meant to Them

That was the beginning of a lasting friendship that inspired Sy’s epic journey to Minneapolis, where he witnessed UVA’s overtime victory over Texas Tech to become the NCAA champion for the first time on school history. 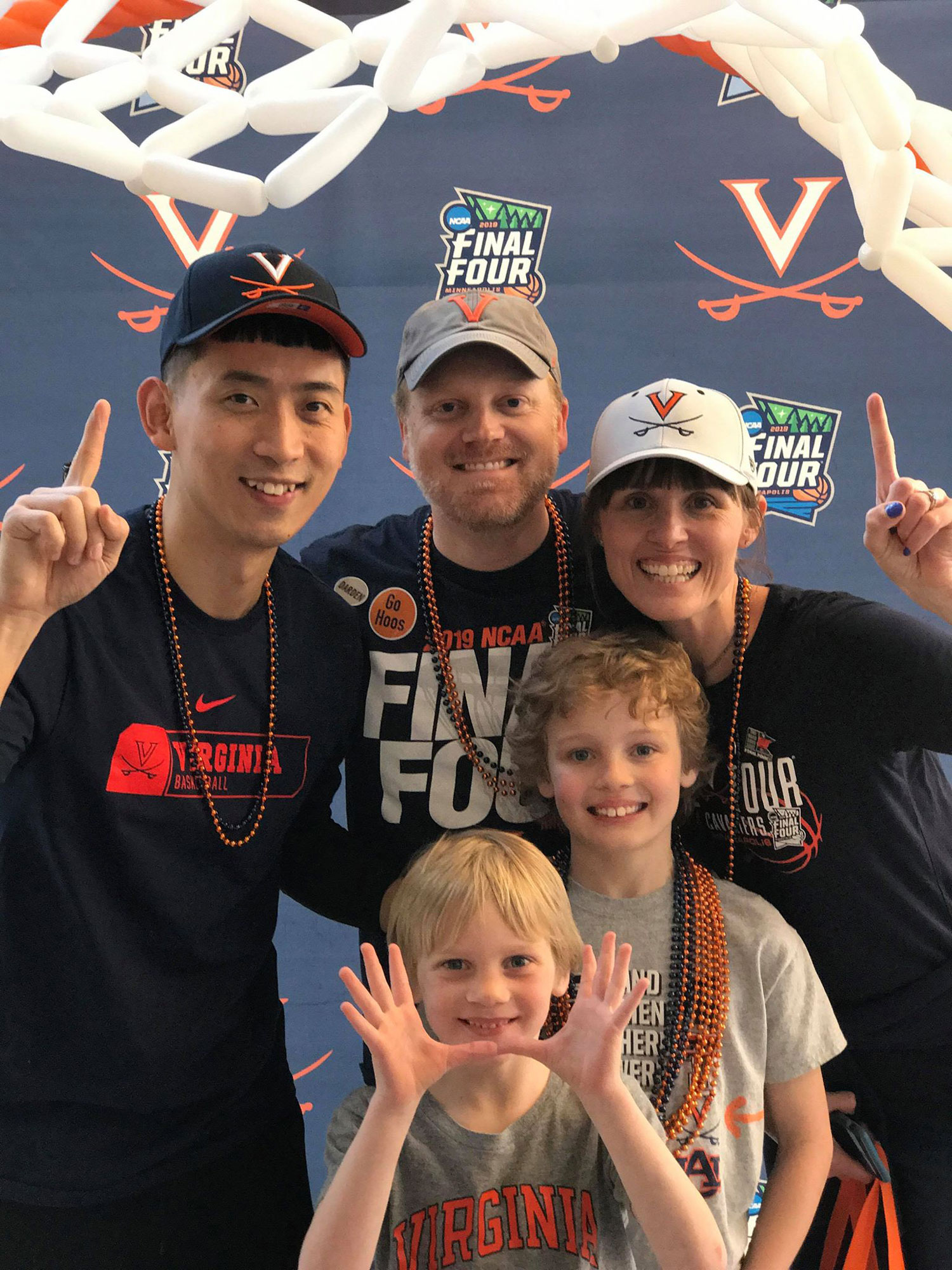 After watching the tournament’s first two weekends ravenously from Macao, Sy decided after UVA won in the Elite Eight round that he had to come to the United States to see how it ended. He messaged Salt, who offered tickets so that Sy could be seated behind the UVA bench with Salt’s family.

There was just one problem: Sy had nowhere to stay.

Enter the popular “UVA Hoops” Facebook group, with its 16,000 members (including family members of UVA basketball players). With just two days before the Final Four, Sy turned to the page for help; his budget could not accommodate the expensive hotel rooms and Airbnbs.

As he traveled the 7,500-mile route, he sought advice and received a loving embrace from the UVA community, which flooded him with suggestions and moral support.

UVA alumni and Minneapolis residents Hillary and Cameron Wallace were watching the posts and decided they had to help.

“I was kind of in awe of his courage to buy a plane ticket and come to Minneapolis, where he had no place to stay,” said Hillary, a 2002 studio art graduate. “I have two little boys and my heart wanted to respond immediately and say, ‘Come stay with us.’

“People were really following his story and rooting him on,” she added.

By Friday evening, they offered Sy their basement bedroom. They scrambled to get the room in order, even laying a UVA blanket and basketball on the bed. Early the next morning, Cameron headed to the Minneapolis-St. Paul airport to fetch Sy, who works with at-risk youth for the YMCA in Macao.

Once he was settled at the house, Sy and the family were on the move.

Hillary said they went to the team hotel several times so Sy could meet up with Salt. One of those visits ended with an incredibly sweet gesture. As the Wallace family, with 10-year-old Harry and 6-year-old Louie, waited downstairs, Sy went up to the team floor.

“It was where the team and family members were staying, and Mike was sort of treated like a family member,” she said.

Sy told Salt how welcoming the Wallace family had been to him. As he turned to head back down to meet them, Salt stopped him. “Jack said he wanted to give the boys basketballs,” Sy said. The 6-foot-10 center then grabbed two balls, signed them and asked Sy to give them to the boys. 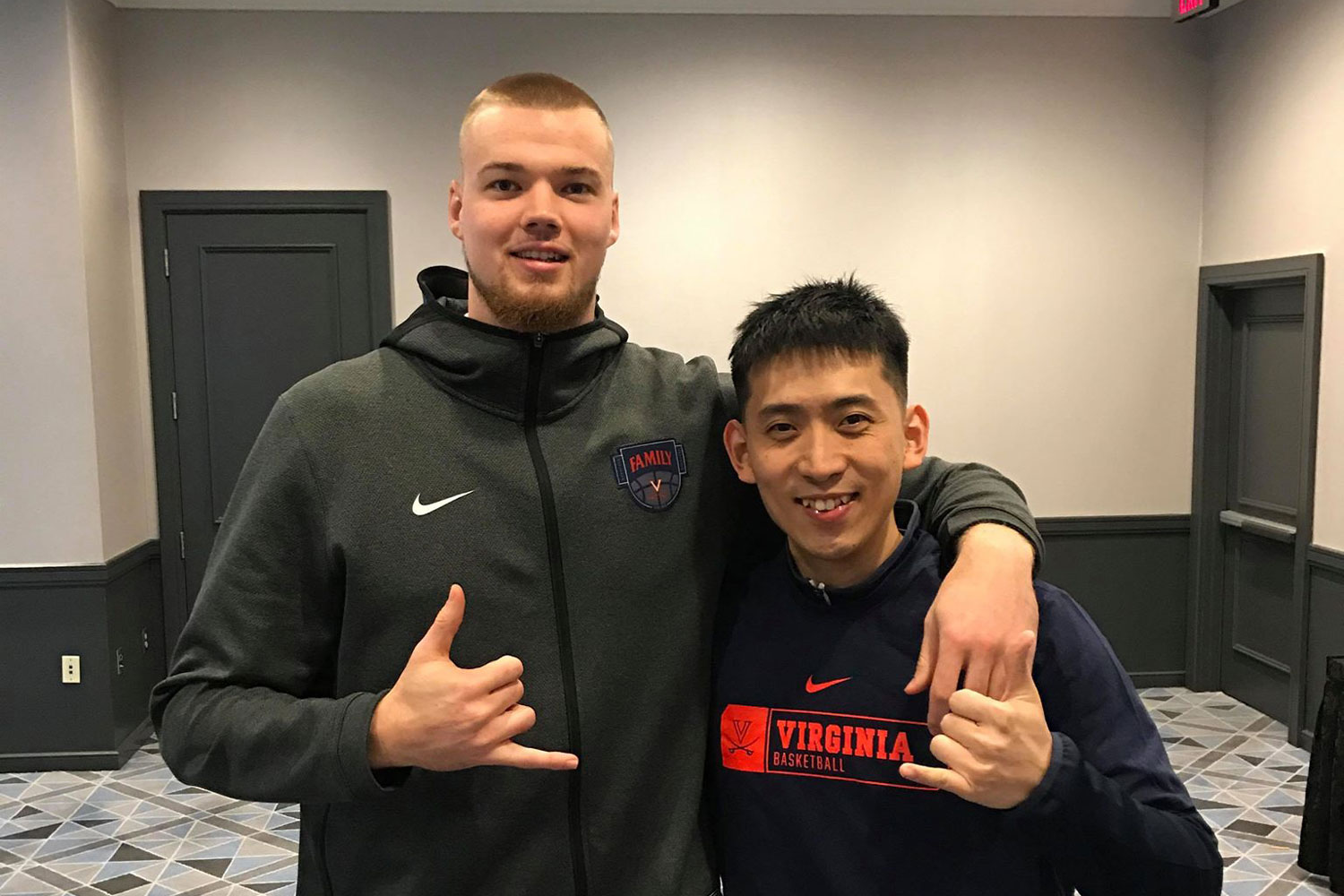 Salt and Sy pose on the team floor of the Marquette Hotel.

Are You That Guy from Macao?

Sy’s public journey made him a celebrity of sorts. “He came to the pregame event with us Monday at Orchestra Hall,” Hillary said. “Everything that we attended, people recognized him. We said, ‘Meet our new friend Mike. He’s a friend of Jack’s from Macao,” she said. “And everybody seemed to be like, ‘Oh my gosh! I’ve been following your story! I’m so glad you’re here!”

Sy said all of the UVA fans made he feel “very warm and welcomed.” 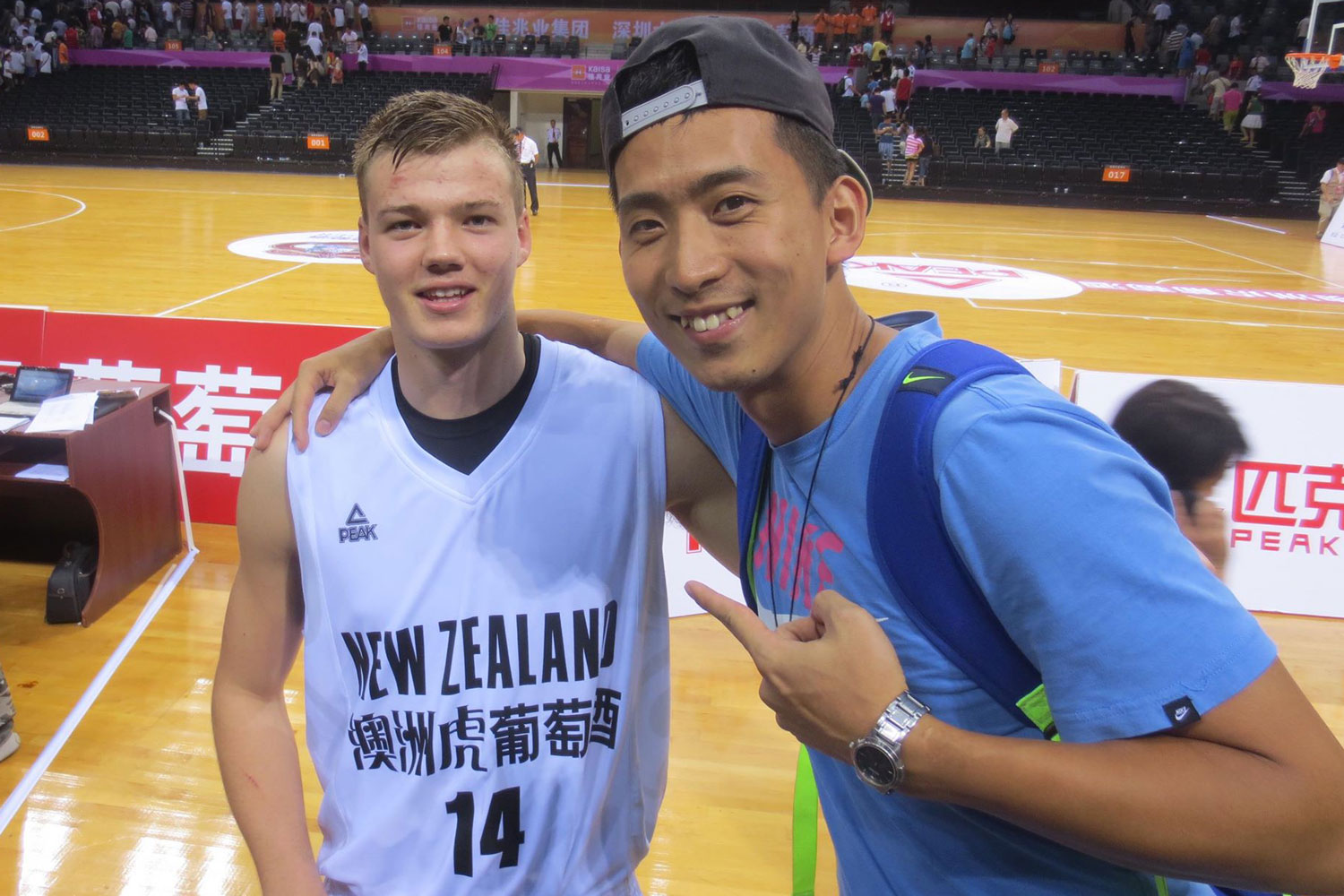 If you haven’t figured it out, Sy is Salt’s biggest fan. He also traveled to see him play at the 2015 Charleston Classic. He is pictured here in 2013 with Salt at an international basketball invitational in Shenzhen, China.

“When we were at the pregame event on Saturday, the rector of the University, Rusty Conner, came up to us and was like, ‘I hear you guys are hosting Mike from Macao,” said Cameron, who has two degrees from UVA – the first a double-major in foreign affairs and economics and the second an MBA from the Darden School of Business in 2008.

For both the Final Four and the championship game, Sy was seated just steps away from the court (while the Wallaces had tickets elsewhere in U.S. Bank Stadium). “The feeling was unreal and unbelievable,” he said. “I totally lost my voice in the first half of the Auburn game because I was so excited and screaming and cheering hard for Jack.”

For Salt, having Sy there was comforting. “Mike is a great friend and a genuine person,” he said. “I was extremely happy that he was able to fly out to Minneapolis and watch us win our first national title.” 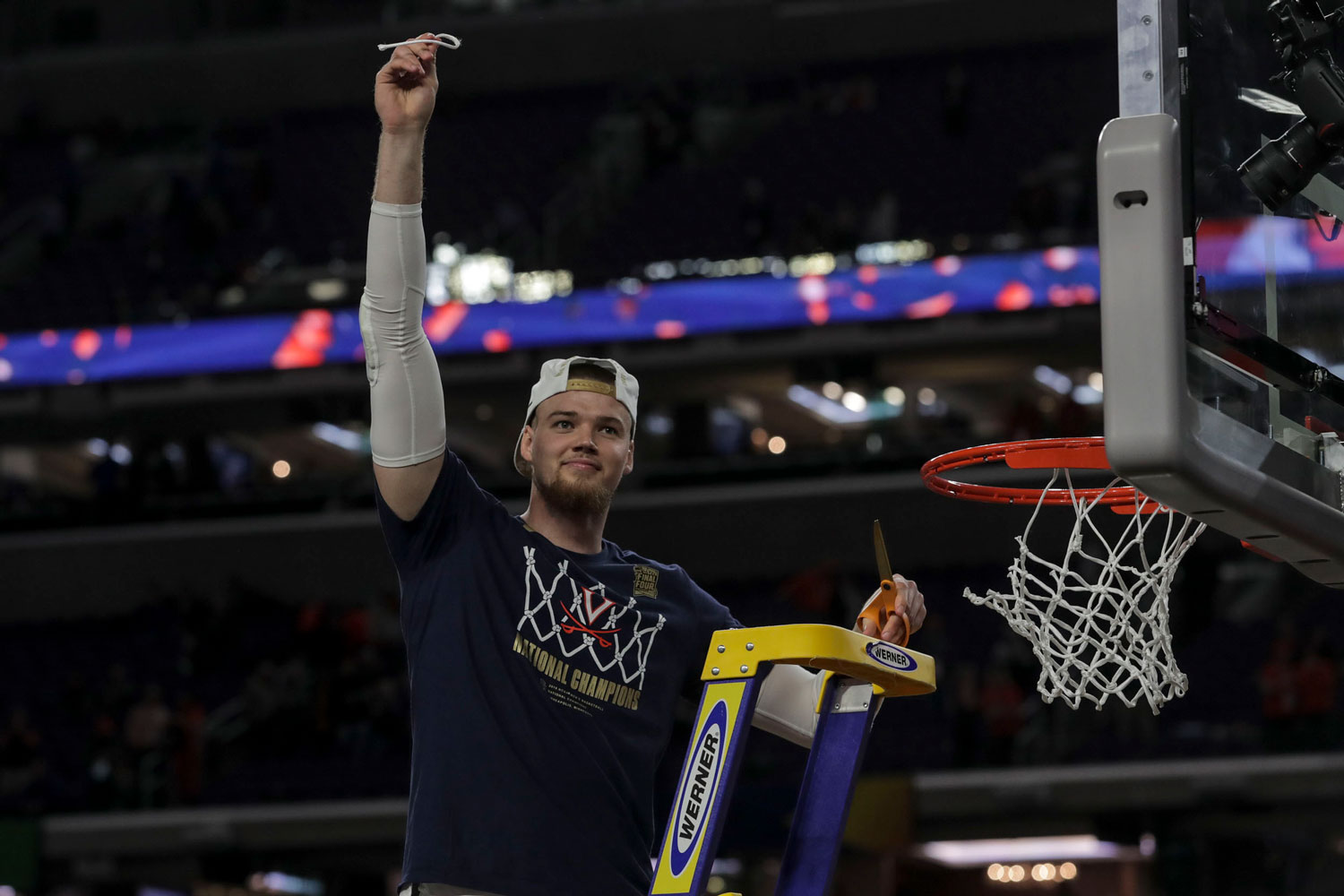 Sy said before the final game he told Salt that the teams he has rooted for in other championship games always won.

“I guess you’re really a lucky charm,” he said Salt told him after UVA won. (Coincidentally, Sy was born in 1984, the last previous time UVA made it to the Final Four.)

Hillary said she loves how sports can bring people together and give them faith at a time when the country is so fractured. “I feel like no matter what you look like, where you come from or what language you speak, you couldn’t believe the shared love and excitement that existed here. It was just totally exhilarating,” she said.

“I am just grateful for having gotten the chance to be part of that with Mike, with our boys,” she said.

“I really want to use this opportunity to give my heartfelt and sincere thanks to all the UVA fans out there who had been following my trip and kept sending regards and love,” Sy wrote. “I was so blessed and overwhelmed by their support. Hopefully I can visit Charlottesville and the beautiful UVA campus by myself in the near future. Go Hoos!!!!!!!” 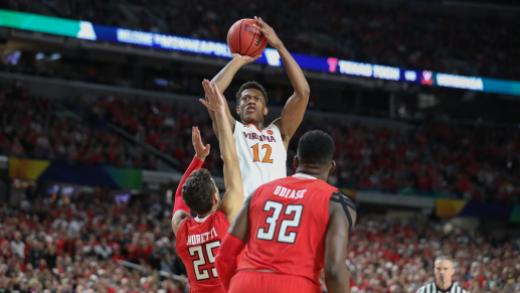 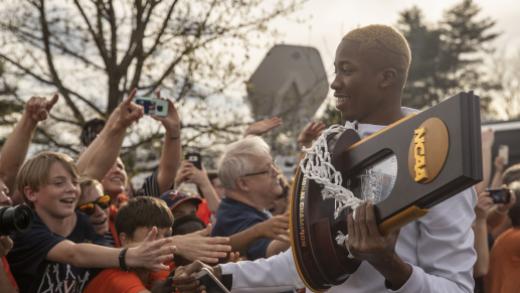 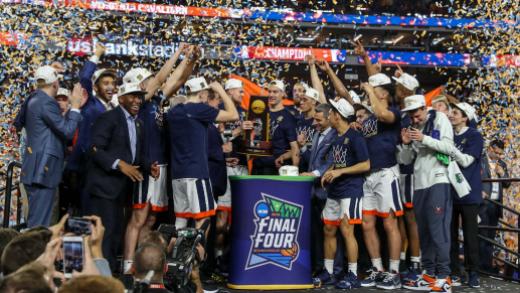