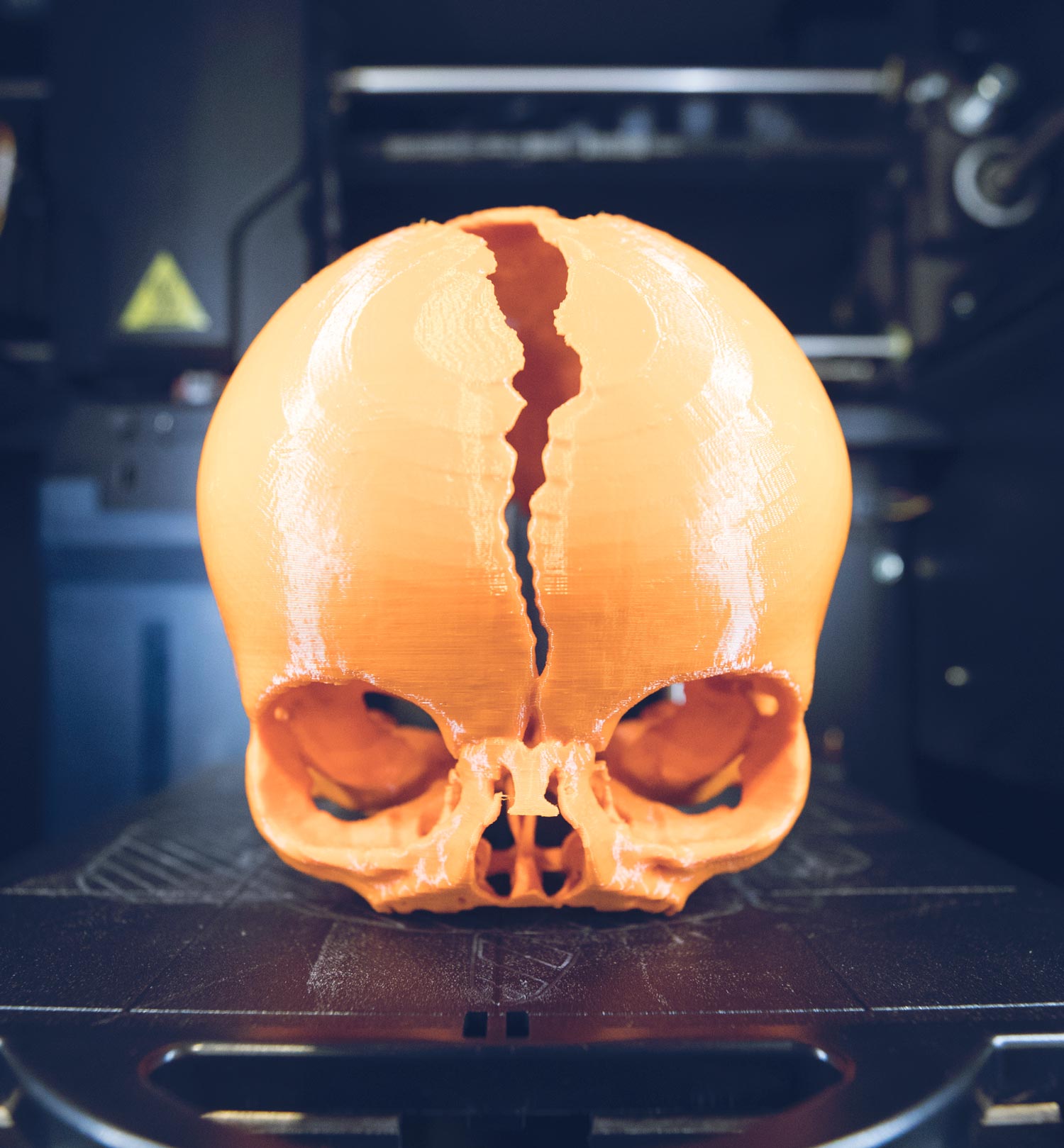 Plastic surgeon Dr. Jonathan Black operates in some of medicine’s most challenging situations, including treating children born with deformities and adults suffering from severe trauma caused by violent accidents.

The work is demanding and fraught, but he is using an emerging technology that is proving its worth as a tool to improve both patient treatment and the instruction of the next generation of surgeons.

During the past year, Black has increasingly relied on 3-D printed skulls to help prepare for surgery on some of his most serious cases.

Black uses computerized tomography, commonly known as a CAT scan, to make a 3-D electronic image of his patients’ skulls. Through a special software, the scans are translated into programming that allows Dwight Dart, design lab engineer in the Department of Mechanical and Aerospace Engineering, to print a three-dimensional, life-sized model. 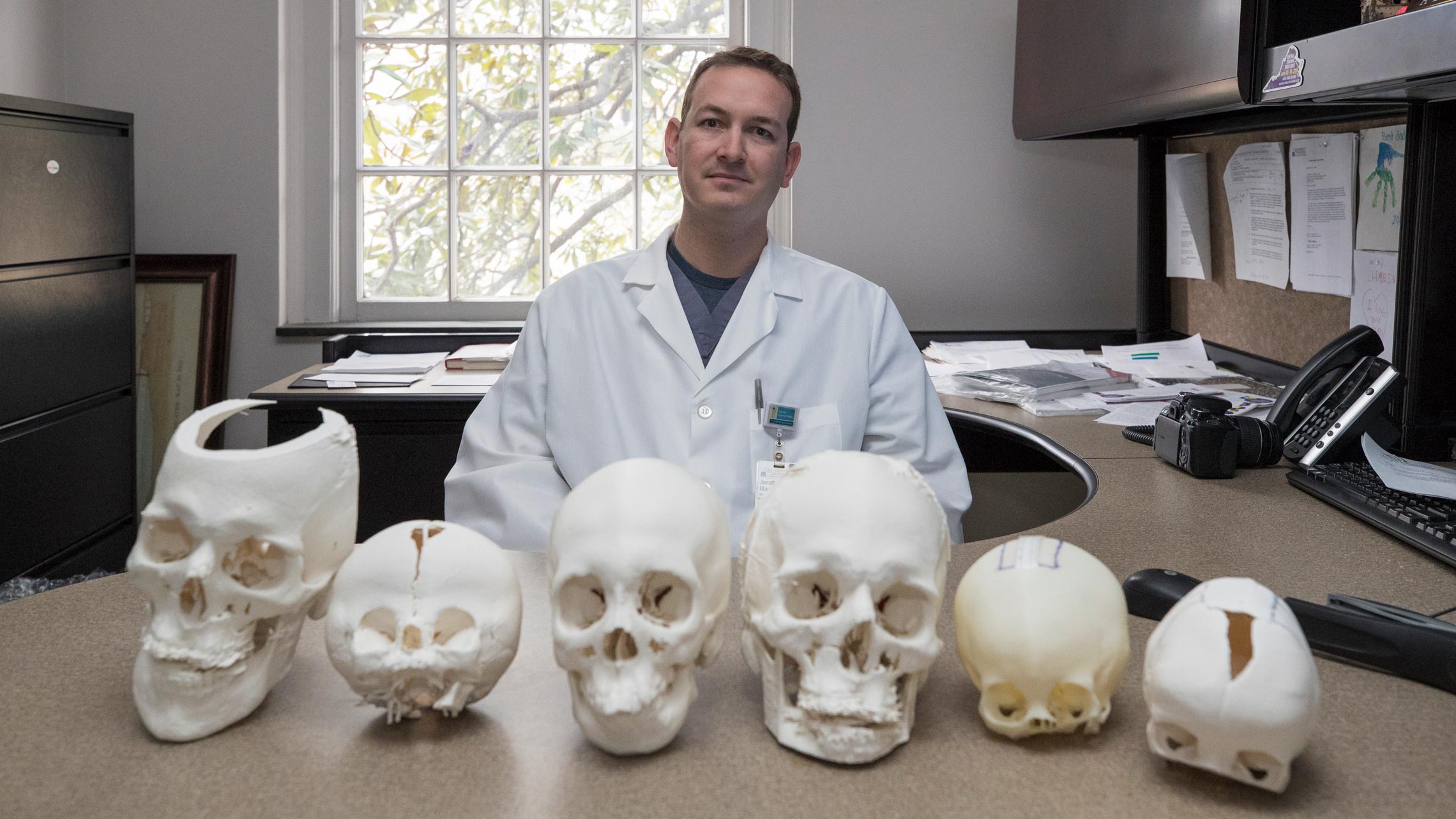 “When the skull prints out, the boney anatomy is printed exactly,” Black said. “It makes it easier to plan. It is more accurate and efficient. We like to measure twice and cut once.”

It generally takes about four days to print the skull, of which about 36 hours is actual printer time.

There are limits to what can be printed, but the density of bone lends it to the 3-D printing process. “Bones are the concrete and wood of the human body,” Black said. “It is hard to simulate the elastic parts of the body.”

Black operates on many deformed infants; the youngest patient on whom he has used this procedure was just two weeks old. “The child was born with too small a lower jaw and the tongue was rolling back into the throat and choking her,” he said.

The jaw had to be cut and stretched with a device, but Black noted there was only a small space on the jaw to attach it. Using the 3-D model, Black was able to measure the jaw and know exactly how much space with which he had to work.

“It let me know how much to contour the device,” he said.

Black also operated on a child with craniosynostosis, a condition in which some of the flexible joints which allow the skull to expand as the child’s brain grows had been fused together. The surgeons had to open the joints so the skull could expand uniformly, adapting properly to the expanding brain. The 3-D model allowed the surgeons to see how and where the plates were fused.

Black has applied this process to some adult trauma cases, when there is enough time to plan. He cited the case of the Nelson County man who injured his skull in a cycling accident, but whose cranial surgery was delayed by his other injuries.

“He had broken his entire face,” Black said. “In a case like this, you have to put it back together in a certain order, like a jigsaw puzzle.”

The 3-D printing produced a skull in pieces and Black and his surgical team were able to determine how the pieces connected by seeing how the edges fit into each other.

The exact, life-sized replicas of patients’s skulls also allow Black to show his interns and students precisely how he will proceed, which he said makes him a more effective teacher.

“This shows how inaccurate drawing can be,” Black said, noting that 3-D models of specific cases could revolutionize medical illustration.

Dr. David C. Lobb, a resident physician in the Department of Plastic Surgery, said the the 3-D model brought to life the difficult concepts of one case, giving him a better understanding of the problems in the surgery and allowed him to think about solutions ahead of time.

“I was better prepared for the surgery as a result of being able to study the 3-D model beforehand and consequently completed the surgical steps with more confidence,” Lobb said. “This translated into a shorter operative time, less blood loss and reduced postoperative swelling.”

With the 3-D models, the procedure planning can be custom-tailored to each specific case. 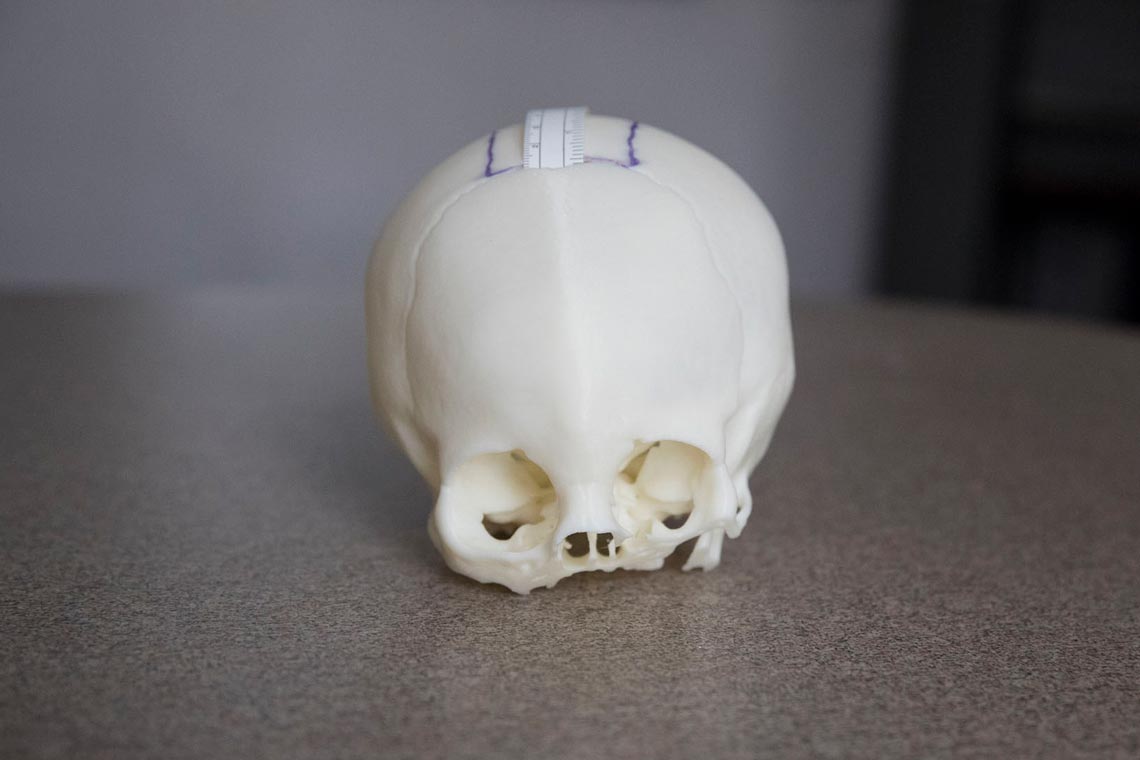 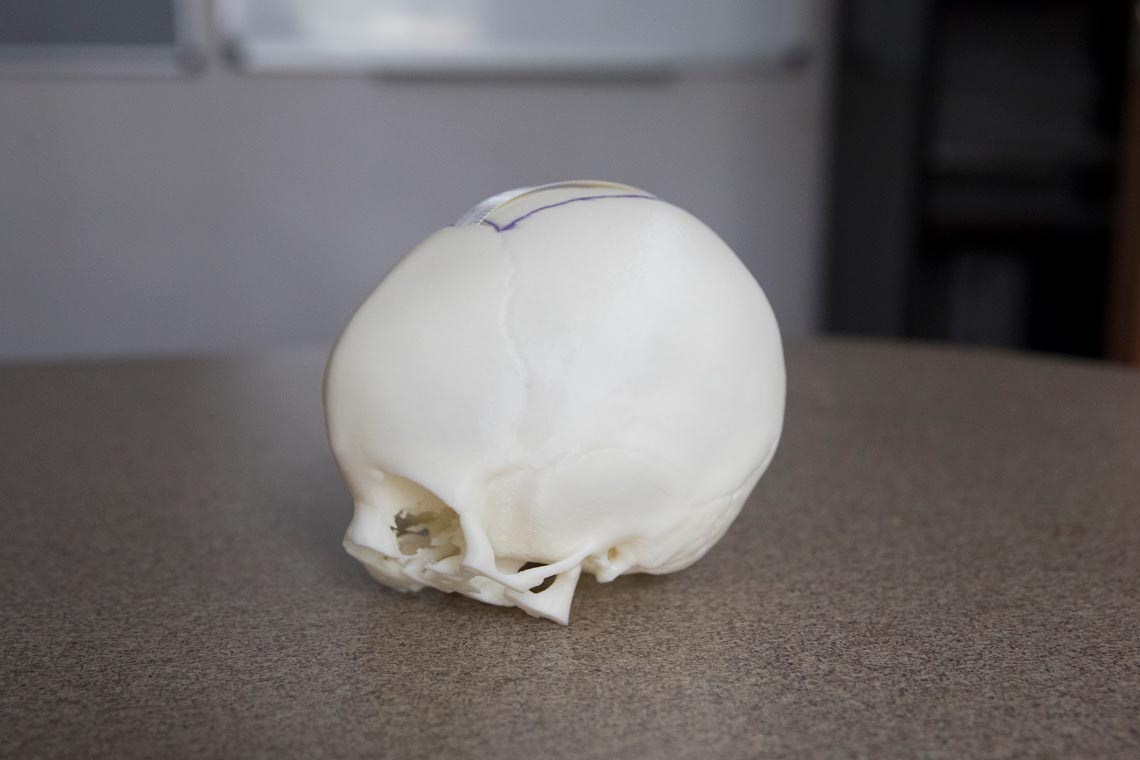 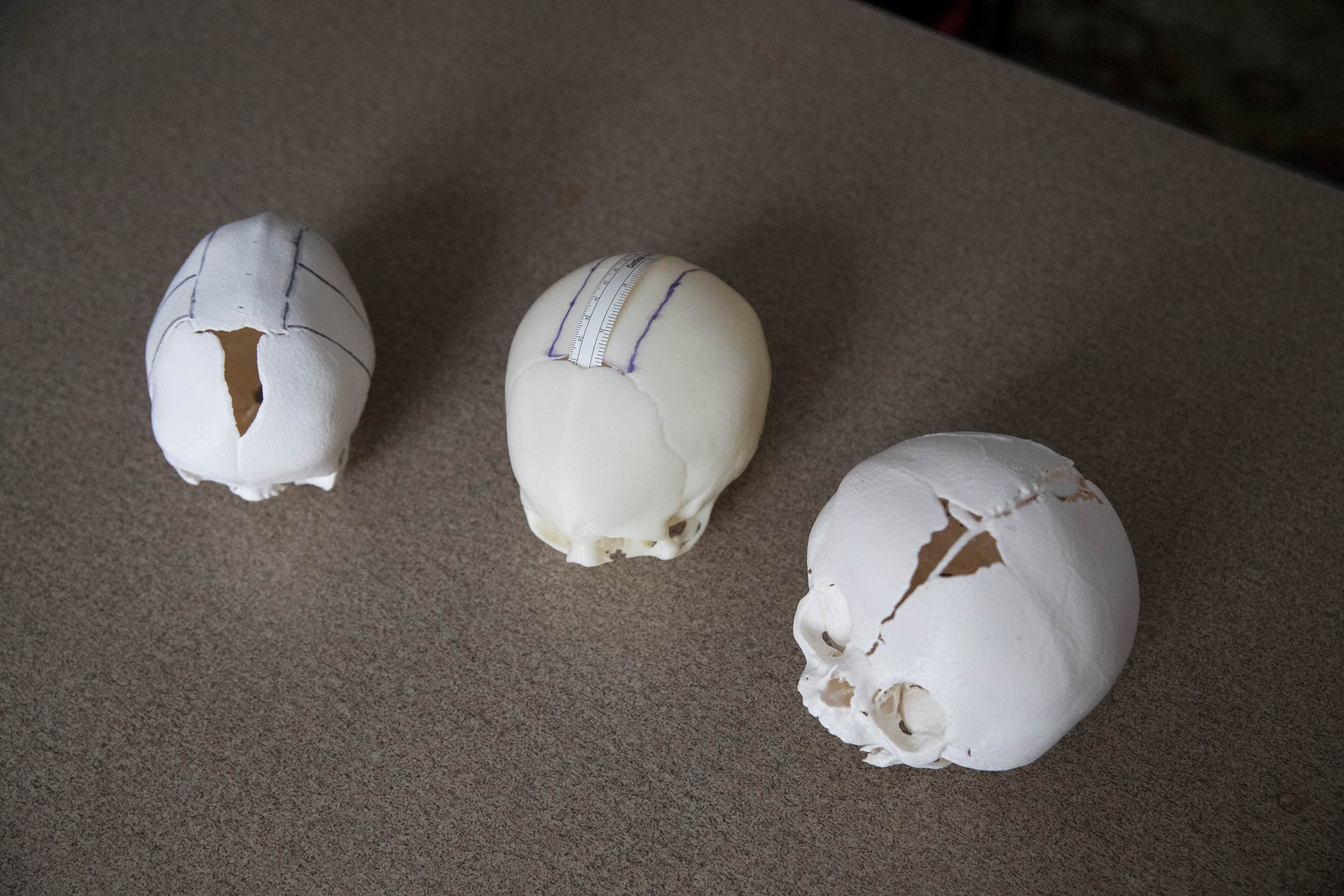 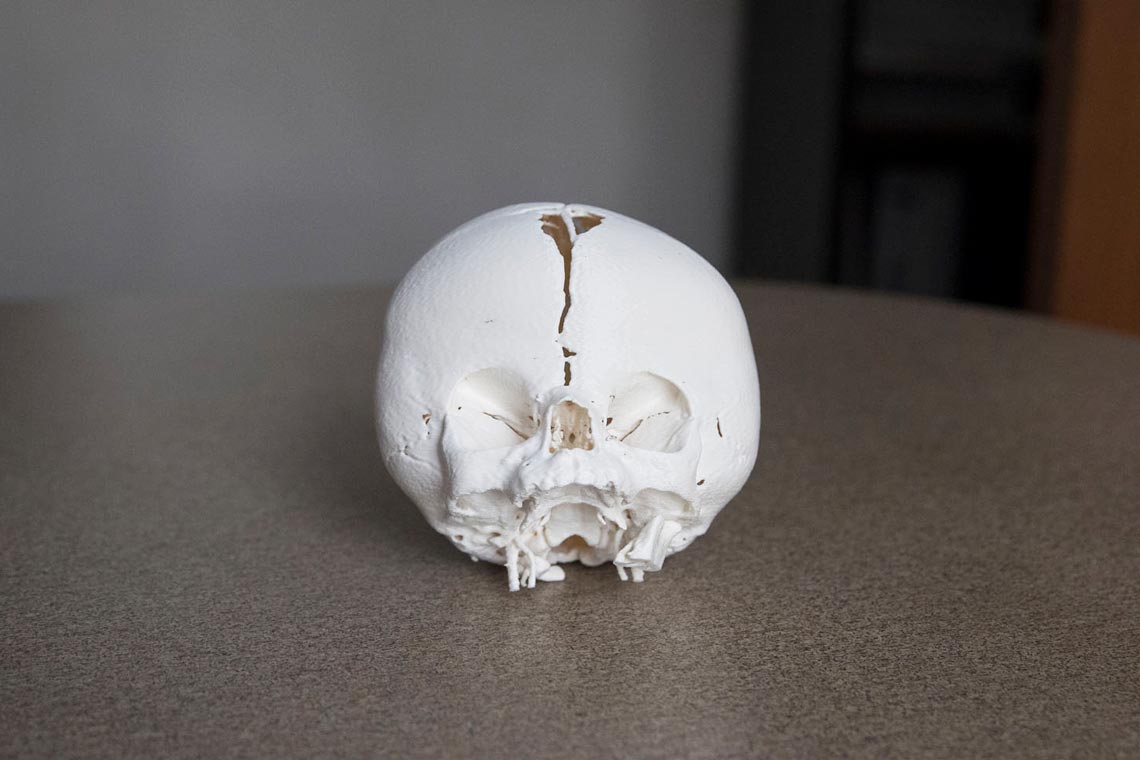 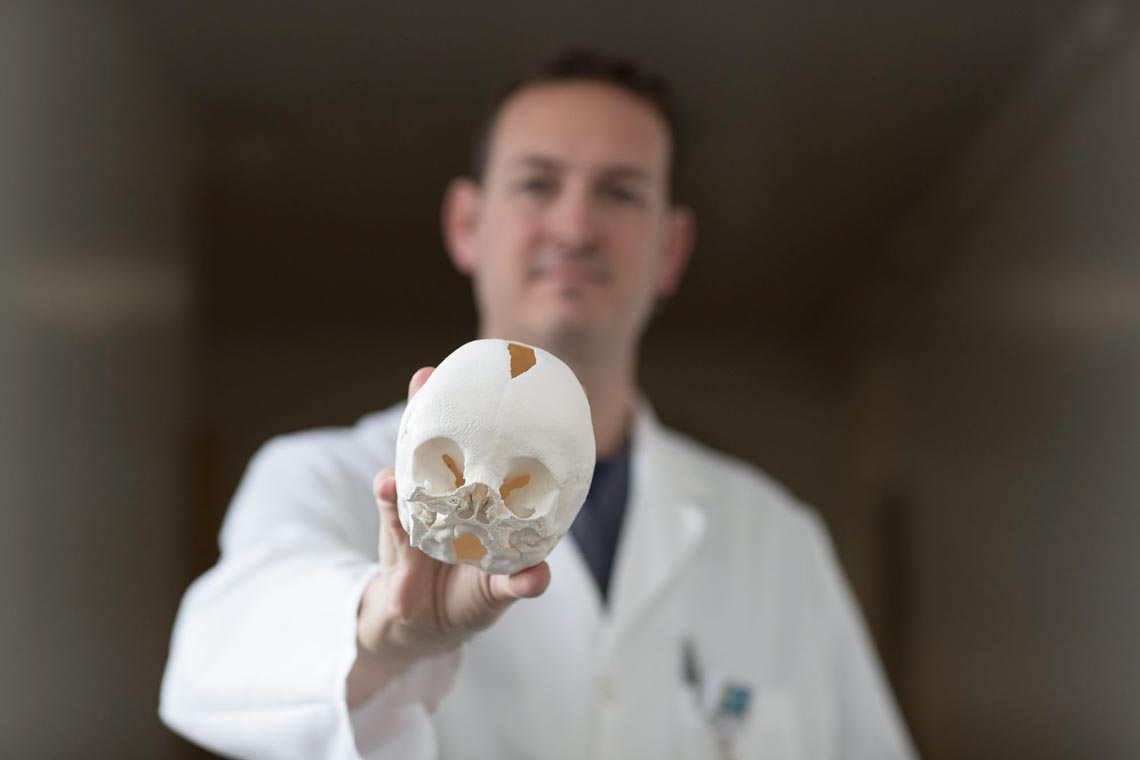 “Despite our ability in medicine to classify patient conditions and thus determine general management strategies, each patient is unique,” Lobb said. “By producing a 3-D model that reflects the patient’s unique anatomy, the operative plan can be tailored to the patient in a way that is not possible to do in the operative setting, where factors such as soft tissue exposure, blood loss and operative time all have to be accounted for simultaneously.”

“We could possibly shorten the residency, or more likely, assure a higher level of competency in the residents,” Black said.

Black started using the 3-D skull method because colleague Patrick Cottler, an assistant professor in the Department of Plastic Surgery, knew Dart, who operates the 3-D printer lab at the Engineering School.

Dart was already printing skulls from scans that are being used by Dr. Jose Gurrola II, a nose specialist who had been working with at the UVA Health System’s otolaryngology clinic. Gurrola’s patients were seeking relief from a wide range of nasal issues, from nosebleeds and chronic sinusitis to brain fluid leaks. To assess the patients and determine the best course of action, Gurrola or a member of his team sometimes perform an endoscopy – a procedure that involves taking a camera with a long scope on the end and inserting it into a patient’s nasal cavity. It can be an unnerving experience for both interning doctors and their patients.

Gurrola and Dr. Robert Reed, an otolaryngology resident, worked with Dart to create 3-D-printed skulls to use as models for rhinological surgical simulation.

Both Black and Gurrola’s 3-D printing projects were funded by the School of Medicine Innovations in Graduate Medical Education grant award. The software used for Black’s project was funded by the Trustees of the Jefferson Trust, which is an initiative of the UVA Alumni Association.

Dart, who has supervised the printing of many things in the lab, said the model skulls may be the tip of the iceberg in potential medical applications for 3-D printing. He is optimistic that one day, custom organs will be printed for transplant. He said there are already experiments in printing skin on a flexible medium. He said printed skin could be used to help heal burn scars.

“Once developed, 3-D bio-printing could wipe out the donor problem for transplant organs,” Dart said. “New organs could be made from your own cells. There would be no organ rejection.”

Cottler noted that while advances are made in medicine and medical education every day, it is currently difficult to print soft tissue because there needs to be a medium on which the tissue is printed.

“It is hard to print a liver and have it functional,” Black said. “The heart is the most basic organ. It’s a pump. But the liver is a filter and the most complex.”

Cottler said he hopes to interest other doctors in working with 3-D models to improve the quality of care – and to defray the costs of the software.

“3-D printing would be a valuable tool in any situation where the bony anatomy is both complicated and unique,” Lobb said. “Outside of craniofacial surgery, reconstruction of extremity bone defects after trauma or tumor extirpation may be improved with the use of 3-D modeling and subsequent jig formation,” or computer-aided modeling used in surgical preparation.

Lobb noted that 3-D modeling and virtual surgical planning are exciting developments in surgery; the ultimate winner is the patient, who will receive better, more accurate and less traumatic surgery.

Black is already spreading the word among physicians. presenting the findings of his year of using the method at a national plastic surgery conference and at the Academy of Distinguished Educators at UVA.

A Year We Will Never Forget: 2019-20 in Review END_OF_DOCUMENT_TOKEN_TO_BE_REPLACED

‘What Will You Carry With You?’ Remarks From UVA President Jim Ryan END_OF_DOCUMENT_TOKEN_TO_BE_REPLACED