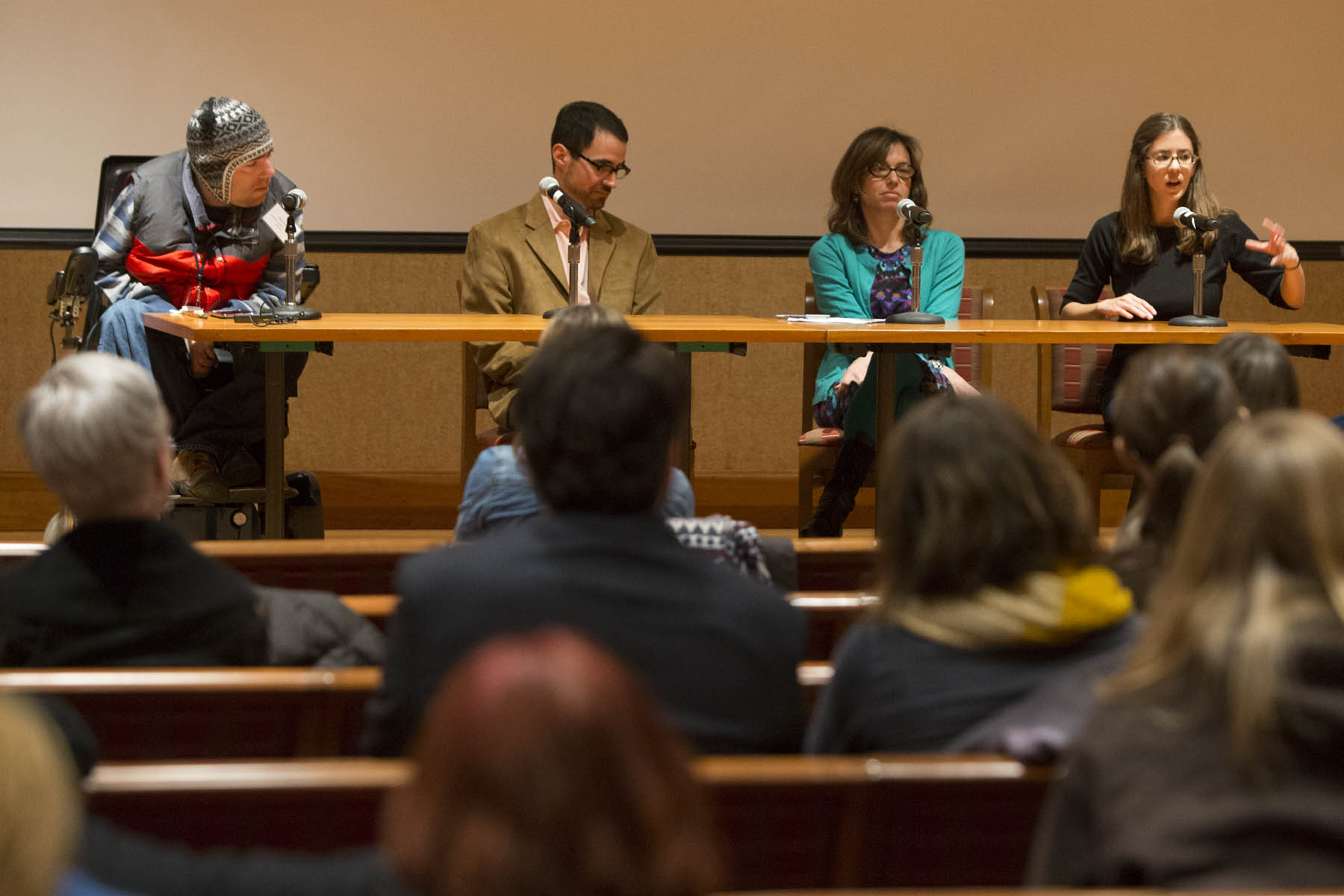 CORRECTED, March 6, 2014, 5 p.m., to specify that the three-year struggle was to include closed captioning in the video feed of U.Va.'s Final Exercises. U.Va. has long provided sign-language interpretation at the event.

Imagine having to make a case for your right to live, just because society deems you less than perfect.

The late disability rights attorney, Harriet McBryde Johnson, did exactly that, writing a 2003 New York Times magazine article, “Should I Have Been Killed at Birth?” She was responding to people like Peter Singer, a philosopher from Princeton University, who opined that parents and doctors could justify killing newborns with drastic disabilities to alleviate their suffering, using the same rationale used to put animals to death.

Rosemarie Garland-Thomson, a professor of women’s studies at Emory University and one of the keynote speakers at a recent University of Virginia symposium, “Disabling Normalcy,” used Johnson’s story to illustrate “why we might want to conserve, rather than eliminate disability.”

At the conference, held Friday in the auditorium of the Harrison/Small Special Collections Library, U.Va. English professor Christopher Krentz, a dozen other U.Va. faculty members and several guest speakers argued that the meanings of disability and treatment of people with disabilities are determined by society. That often leads to an impoverished life for those with disabilities, and it also keeps society from understanding what everyone could gain with more acceptance and inclusiveness.

“Disability is everywhere, once you know how to look for it,” Garland-Thomson said.

“And we’re still learning how to look for it,” added the other keynote speaker, Michael Bérubé, an English professor at Pennsylvania State University who focuses on disability studies, along with other topics.

“How many people think of Harry Potter as a disability narrative?” Bérubé asked. He used the Harry Potter books – more on that later – and other popular stories to show how authors convey ideas about disability through characters and plots, even when readers might not be consciously aware of it.

Although anyone could be or become disabled, this broad and varied category has all too often been left out of discussions of civil rights, said Krentz, who is deaf and teaches American Sign Language and American literature.

He gave a brief history of people with disabilities and related issues at U.Va. In the 1920s, T. Munford Boyd, blind from the age of 3, attended U.Va. and the Law School, returning to join the faculty in 1947 and serve for more than 20 years. He was the third recipient of the Thomas Jefferson Award.

On the other hand, Franz Stillfried, a graduate foreign affairs student with brittle-bone disease, died in 1988 when he and his motorized wheelchair rolled down the ravine at the site of today’s John Paul Jones Arena. Stillfried, who stood only about 3 feet tall, was a prominent disability rights activist and had won the University’s Algernon Sydney Sullivan Award.

U.Va. has come a long way since then in improving accommodations, Krentz said, but it still took a three-year effort, for example, to get approval for closed captioning at Final Exercises.

“What happens when we make disability part of the meaning of ‘normal’?” Krentz asked.

Garland-Thomson explored that idea in several ways. Among her publications, the 1997 “Extraordinary Bodies: Figuring Physical Disability in American Culture and Literature” inaugurated the then-new field of disability studies by framing disability as a minority discourse rather than a medical one.

She traced American society’s assumptions about the desirability of human perfection to the eugenics movement, which began in the 19th century.

She asked that people examine what disability brings to the world – what is gained, rather than what is lost. Her examples included the growth of deaf culture, the production of new technologies to accommodate people with disabilities and the opportunity for ethical development.

Life changed drastically for Vikram Jaswal, U.Va. associate professor of psychology, when his daughter was born five years ago and subsequently diagnosed with autism, he said. He knew from developmental psychology that it was only about 40 years ago that scientists devised experiments to test the competence of infants and discovered babies could add and subtract, at least “1+1=2” and “2-1=1.”

The research and knowledge on autism is at about the same point as psychology was 40 years ago, when people assumed babies weren’t very competent.

In researching autism, about which he had learned almost nothing in his education, he said, he found autistic children are judged on a “presumption of competence,” so their differences are explained as deficits and dysfunctions.

“Failure to presume competence has real – and negative – consequences for how people are educated and treated,” Jaswal said. “Can we really know someone’s abilities by what they cannot do?”

Bonnie Gordon, associate professor of music at U.Va., credited her parents with her success as a scholar because of their support. Their education and economic stability gave them the power to advocate for their visually impaired daughter. They switched Gordon to a private school, because in the public school, all kinds of children with disabilities were lumped together in one class, whether it was appropriate or not.

Making another comparison, she said, the odds are stacked against poor children with disabilities, whose parents probably wouldn’t have the means to pursue the best possibilities for them.

Like Garland-Thomson, Gordon said she admired the University for focusing on disability issues – and that is the main reason she agreed to give a presentation. She said she has been asked many times in recent years to present at conferences or write papers on disability studies, because others wrongly assume she must be working in that area.

She described it as being “asked to perform as a disability scholar,” when she is not.

“I’m hesitant to join disability culture, because it could reinforce what is normative,” she said.

In his talk, “The Ubiquity of Disability,” Bérubé explored the ways authors use disability as a literary device, and that it veers from being part of the story to bringing up ethical questions about justice.

When Bérubé spoke about the Harry Potter series, he zeroed in on a revelation that comes in the seventh and final book, when professor Albus Dumbledore, Harry’s mentor, tells him that as a young man, Dumbledore resented his (magically) disabled sister and felt caring for her held him back from the brilliant career that was rightfully his. When his sister died, however, Dumbledore re-evaluated everything about his family and his life, and proceeds to devote himself to fighting all kinds of inequalities.

“Intellectual disability, then, serves as the ethical core of a narrative in which it never explicitly appears,” said Bérubé, whose adult son has Down syndrome. The experience led him to write the 1996 book, “Life As We Know It: A Father, a Family and an Exceptional Child,” and to study disability in literature, along with the other topics in literary theory and cultural studies.

Using books from Cervante’s “Don Quixote” to Philip K. Dick’s science-fiction novel, “Martian Time-Slip,” Bérubé showed how the use of intellectual disability in literature invites readers into depths and heights of understanding.

The field of disability studies aims to challenge attitudes about what is considered “normal” and increase public awareness about how society treats, portrays and accommodates the wide range of people with disabilities – which the United Nations estimates at 15 percent of the world’s population, or 1 billion people, making them the world’s largest minority group.