Thinking About the Outside of the Box 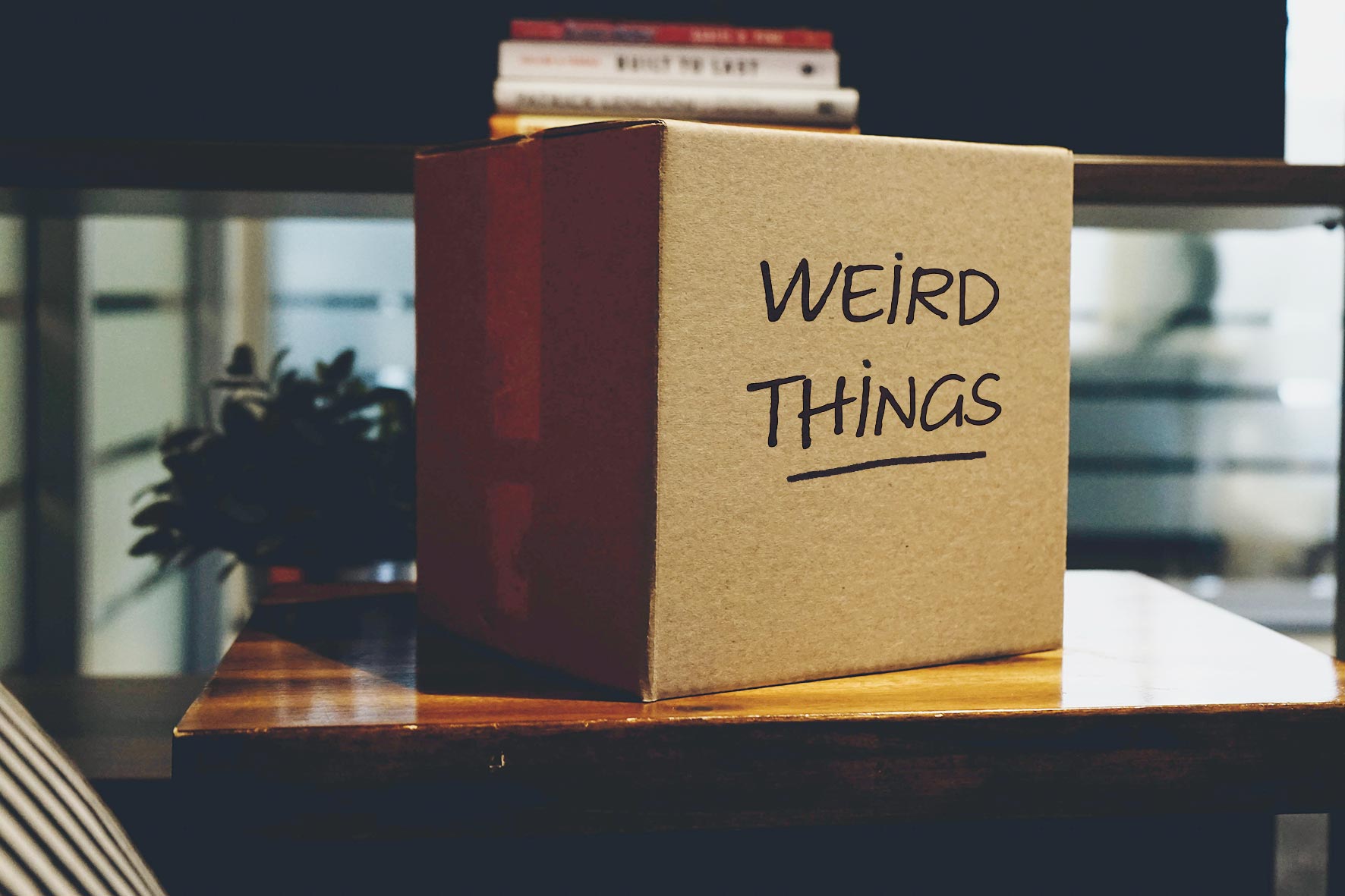 And will thinking about things outside your normal experience then help you redefine what you understand about more “normal” things?

This is part of the lesson that philosophy graduate student Kirra Hyde is trying to get across in her “How to Think about Weird Things” course, being offered in the first summer session.

Hyde, who is a year away from completing her doctorate, said her course material covers a lot of bigger questions, such as “What justifies beliefs?” and “What is knowledge?”

“But in this class, we are trying to apply them to what I call ‘weird things,’ which can be stuff like extrasensory perception, unidentified flying objects, telepathy – things that you might call paranormal,” Hyde said.

William Kingdon Clifford, a 19th-century English mathematician and philosopher, would have none of that, she pointed out to her class. Clifford advocated for evidence to believe something. 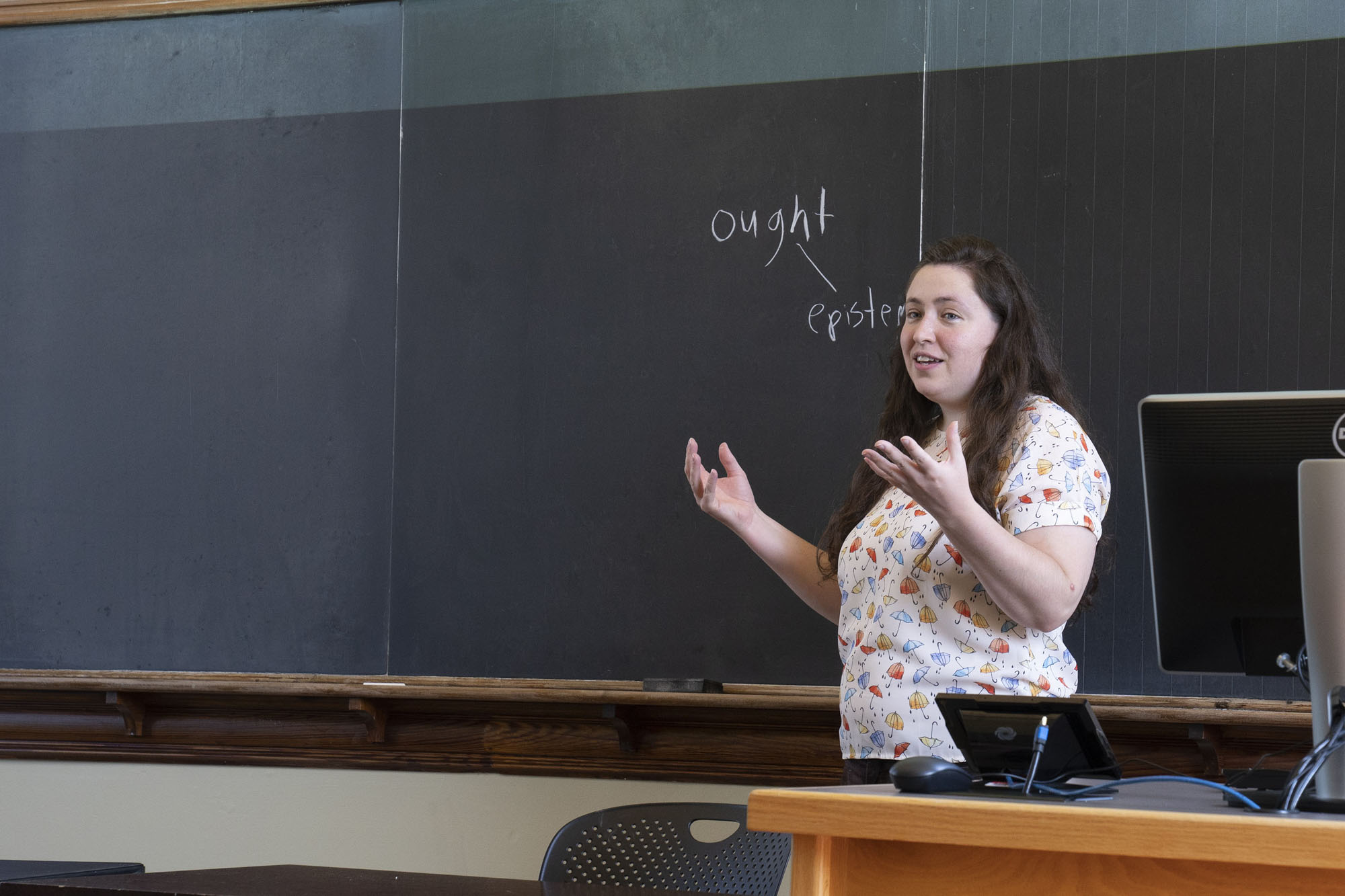 Hyde projected a slide on the wall: “It is wrong always, everywhere, and for anyone, to believe anything upon insufficient evidence.”

She addressed a row of six students sitting in a straight line in an airy, high-ceilinged room in Cocke Hall, with large windows letting in plenty of light from the humid day outside. The students wrestled with issues of moral culpability, reasoning through Clifford’s approach.

“You’re right to believe something only if you have sufficient evidence for it,” Hyde quoted Clifford as saying.

The students would question what she was telling them or question Clifford or question Clifford’s premises. And at least twice Hyde broke them up into two discussion groups to further chew through Clifford’s formulations. The students murmured among themselves in the group, then Hyde pulled them back into their line and they continued the discussion of Clifford and his points.

Clifford was an assigned reading, outside the primary text.

“We have a textbook, ‘How to Think About Weird Things: Critical Thinking for a New Age’ by Lewis Vaughn and Theodore Schick. It is intended to teach critical thinking principles that you can use to assess weird claims,” Hyde said. “I supplement it with articles which are not always directly about the weird things.”

Hyde said one of the classes recent discussions focused on the “impossible.”

“What does it mean for something to be impossible?” she said. “You are going to say, ‘There is no telepathy. That is impossible.’ But what does that mean? So, then we talk about it with the textbook, but we read some other articles.”

And Hyde is willing to admit that “weird” is a moving target.

Once the realm of conspiracy theorists and science fiction fans, a U.S. Senate subcommittee is now looking into UFOs. And while telepathy may fit into the weird category now, she noted that some people are working on implantable computer chips that might be able to project thoughts.

“I think there are definitely things that once would have been classified as weird that no longer are,” she said. “Meteors are no longer considered weird things. Everybody believes in them. But 300 years ago, people didn’t, and they thought it was such a weird, bizarre thing that can’t be true. Thomas Jefferson thought the idea of meteors was preposterous. It is not going to be static forever and people’s ideas of what is weird can shift over time.” 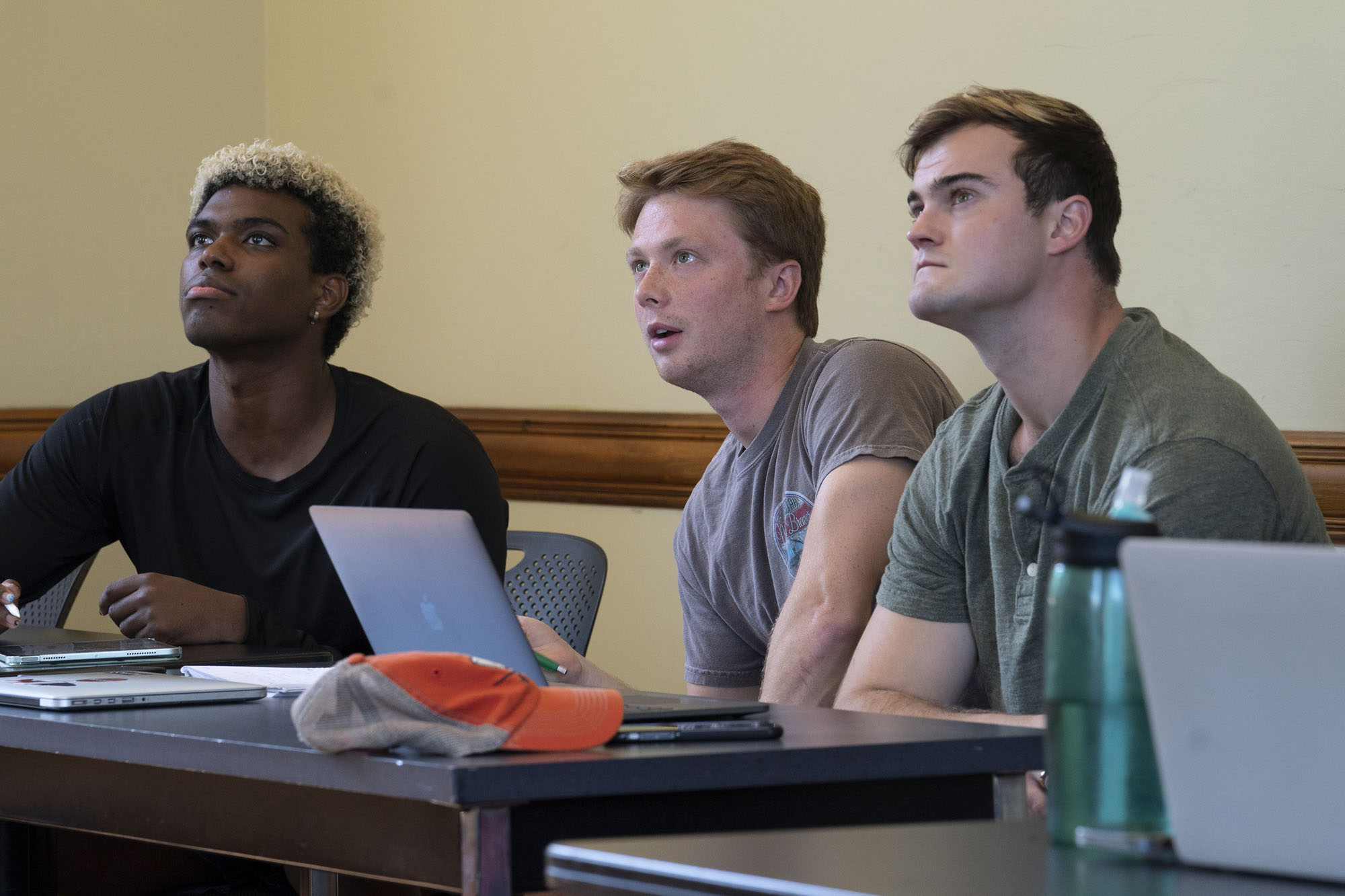 Hyde started the course because she thought it would be fun, an assessment that has not changed now that she is halfway through.

The fun and the novelty make it more memorable for the students.

Mars Harris of Alexandria, a fourth-year English major, took the course because he thought it sounded interesting.

“I like how it breaks down critical thinking,” he said, a technique he said he would apply to his literature classes. “We focus on different arguments and assessing evidence. I learned there are good and bad ways to come to a conclusion.”

Victoria Kim of Colorado, a fourth-year cognitive science major, needed a philosophy class for her major and thought “this one looked the most interesting.” So far, she has not been disappointed.

“I have learned that there are lots of ways you can approach a problem,” she said, but in dealing with the concepts of why people believe what they believe, Kim acknowledged that she could be gullible. “I tend to believe whatever is presented to me. Every time I read something, I think that it is right.” 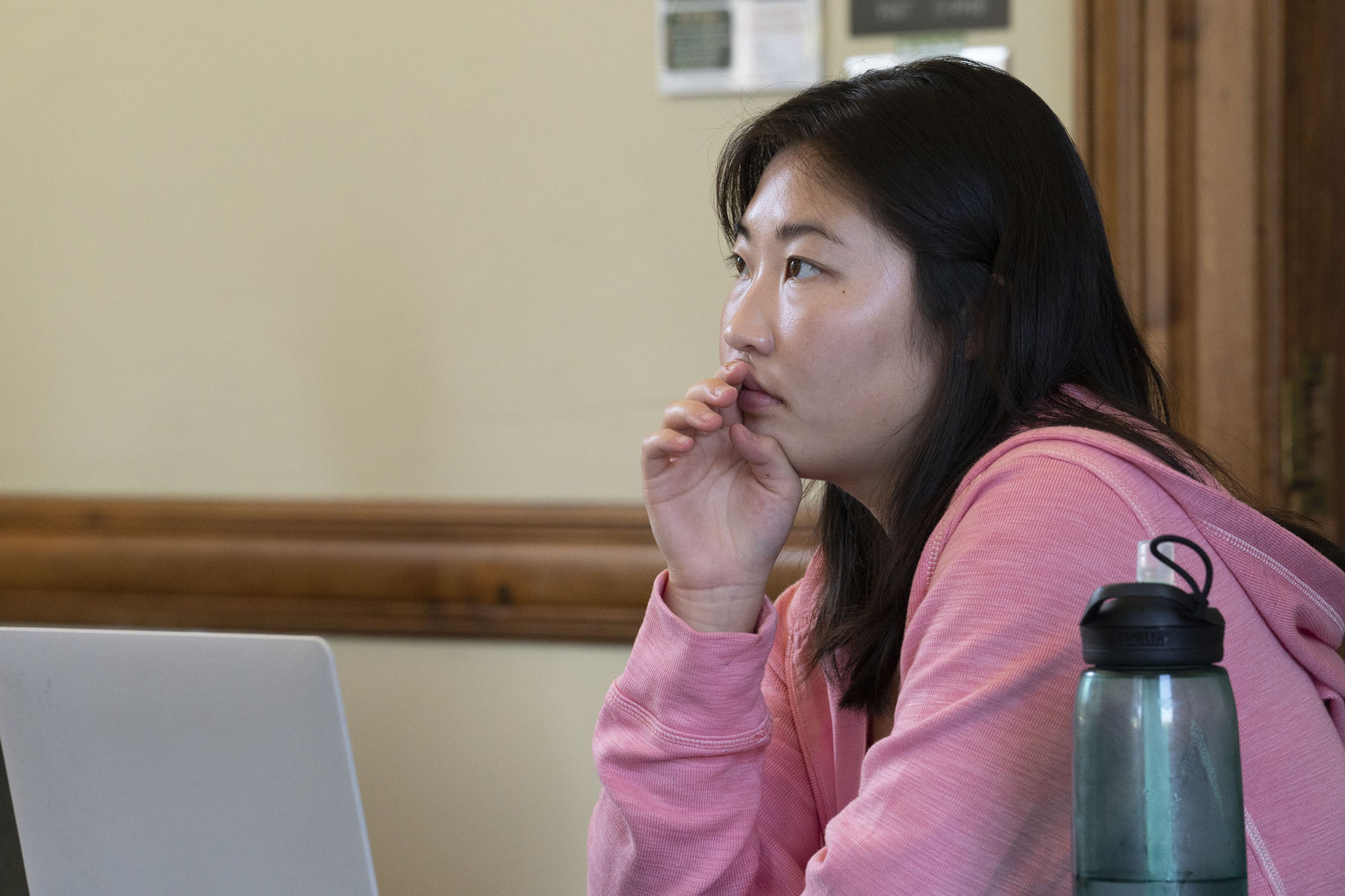 Victoria Kim, a fourth-year cognitive science major, learned that there are many ways to approach a problem. (Photos by Dan Addison, University Communications)

Hyde notes to the class that Clifford, the mathematician and philosopher, has a concept of sufficient evidence heavily based on experience that you don’t have to accept. Hyde wants the students to wrestle with justification for their beliefs and what it means for something to be possible or impossible.

These are the types of questions that brought Hyde, a native of Pocatello, Idaho, to her first philosophy class at Southern Virginia University in Buena Vista, where she majored in philosophy and music.

“I took my first philosophy course as an undergraduate and it was mind-blowing,” she said. “You don’t get to think through questions in the same way in any other classes. It is like all the questions that get pushed to the side in other subjects, that you are not really supposed to focus on because it is not the content, become the content. I really liked this method of thinking through things.”

After Southern Virginia University, she completed a master’s degree in philosophy at Brandeis University and was not ready to leave philosophy. She came to UVA for a doctorate. Of the three options from which she had to choose, she thought UVA was the best fit for her.

“I didn’t decide to go to grad school right away, but just the idea of leaving philosophy behind made me sad,” Hyde said.

Hyde works in the field of metaphysics, a branch of philosophy that deals with abstract concepts such as being, knowing, substance, cause, identity, time and space.

“You could describe philosophy as finding truth, and I think that is right, but it isn’t always straightforward truth,” Hyde said. “Sometimes it is truth about what follows from what. You can connect ideas, such as A follows from B and argue that you have learned something about how ideas are connected to one another. For instance, perhaps you ought not to believe in telepathy. But you can learn something by asking, ‘What could make a belief in telepathy justified?’ Also, subjects like telepathy and aliens are a fruitful ground for fun ideas. People who do metaphysics are often drawn to fun ideas. And I definitely am.”