A Tulip Poplar Tree Gets a Second Life as a Table, Thanks to Architecture Students 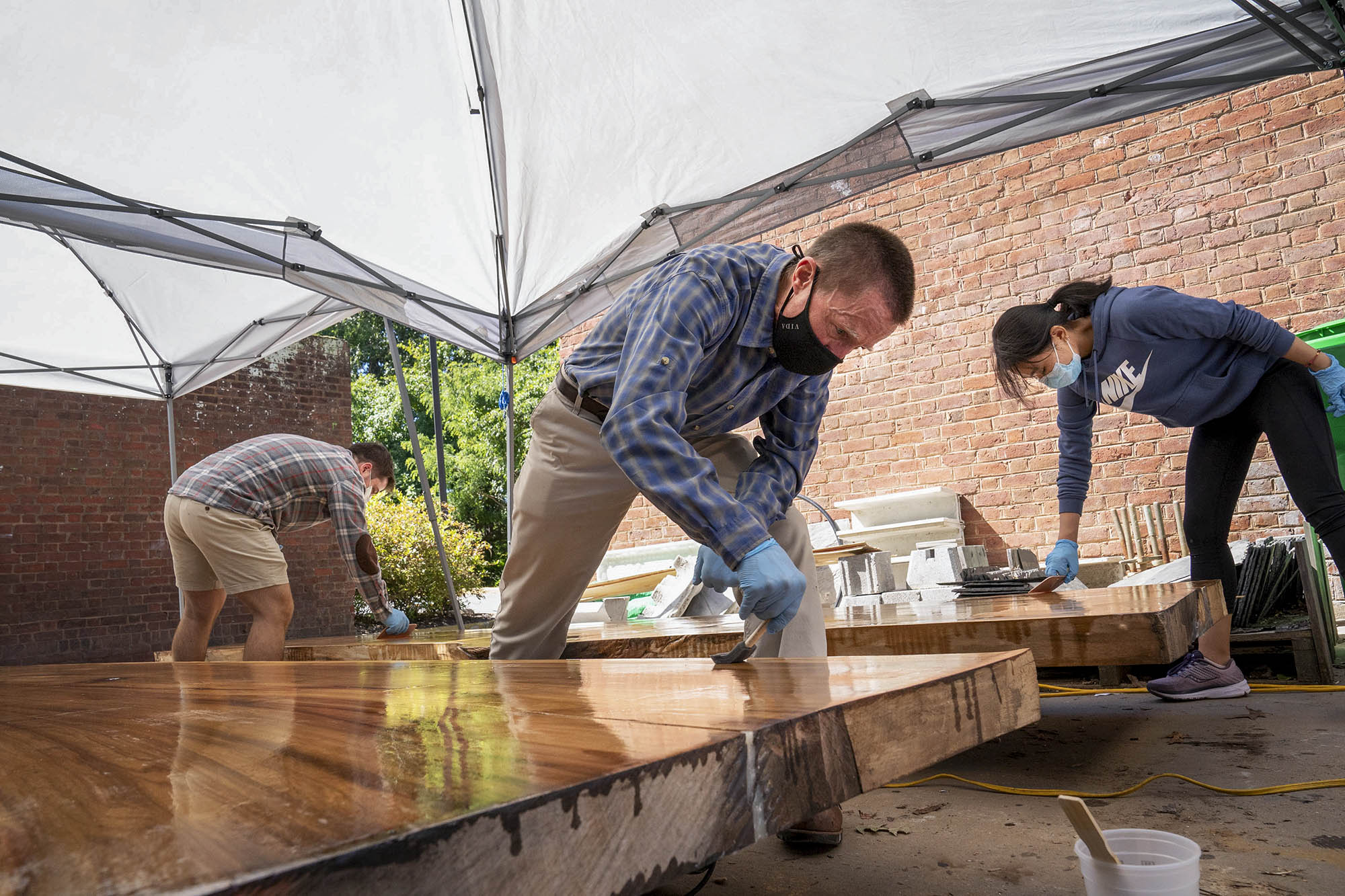 On a recent Friday afternoon, Youfang Duan and Tim Victorio slowly drizzled a second coat of epoxy onto large slabs of milled and sanded poplar wood, then smoothed it out with small scrapers to make an even covering. They had just worked over the wood with hand-held electric sanders to rough up the surface so the new layer of epoxy would adhere better.

Victorio and Duan, graduate students in architecture and landscape architecture, respectively, are part of a team turning a piece of University of Virginia history into another piece of University history. They are using wood from a 125-year-old tulip poplar tree, felled as part of the Alderman Library renovation, to make a table that will complete the design of an outdoor classroom at the School of Architecture’s Campbell Hall.

Victorio and Andrew Spears, who graduated in 2020 with a Master of Landscape Architecture degree from the School of Architecture, created UVA Sawmilling to mill trees felled on Grounds, preserving the wood as lumber to be used in projects on Grounds. 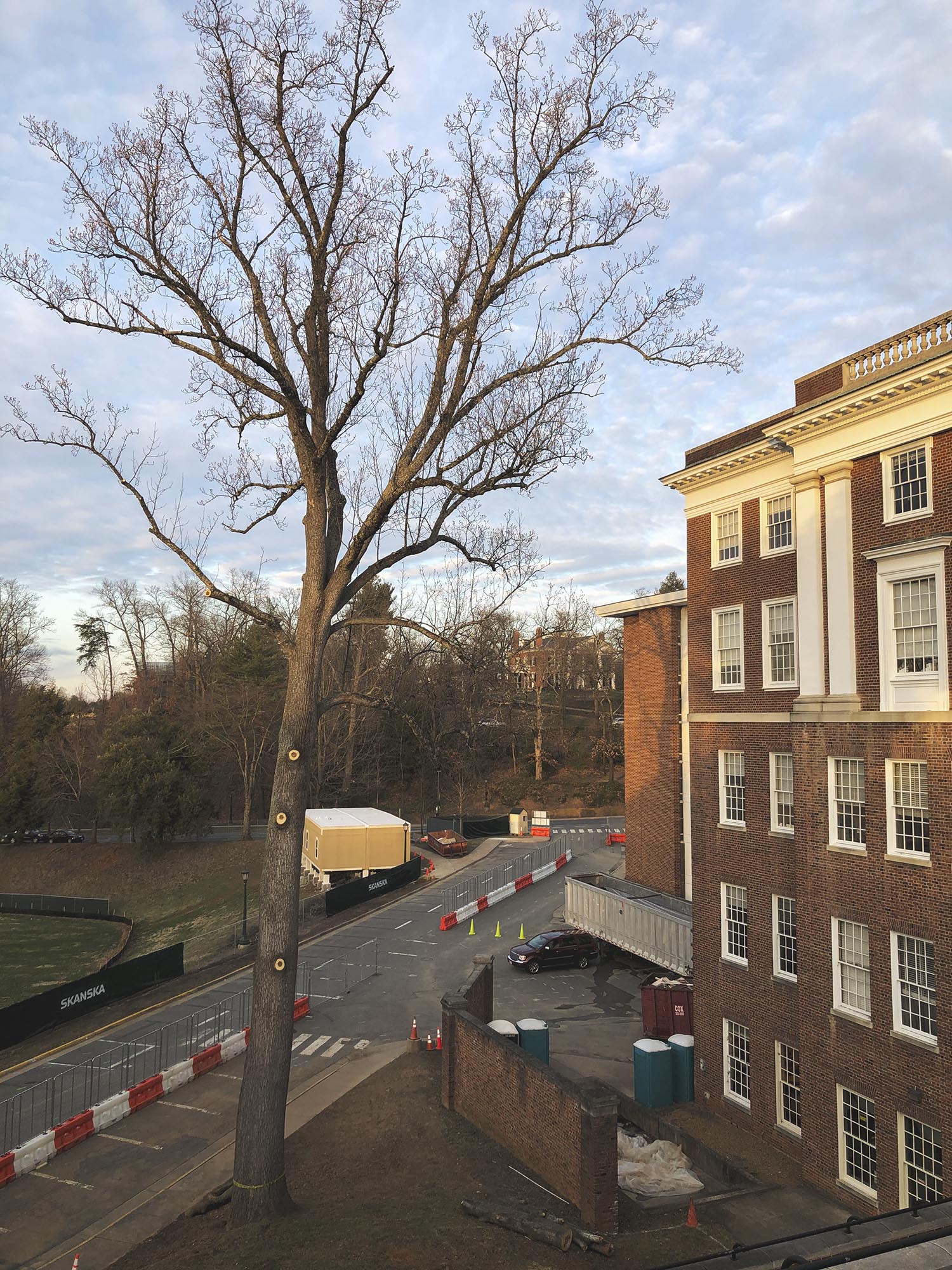 The poplar tree towered over Grounds next to Alderman Library for about 125 years. Taken down for Alderman renovations, now the tree’s wood will remain on Grounds.

“The idea behind UVA Sawmilling is to promote sustainability and education and preservation by making use of trees that have to come down on Grounds,” Spears said. “We are focused on making good material available to those within the University community for their needs, whether that be the UVA cabinet shop, students and faculty for research projects, set-builds, for picnic tables and benches or for amazing tables like those coming from the ‘Alderman Poplar Time Tables’ project.”

Mark Kutney, an architectural conservator at UVA Facilities Management who worked with Spears on building a solar kiln to dry lumber at the University’s wood yard on Observatory Hill, is also involved in the table project, as is Erin Putalik, an assistant professor in the School of Architecture. Duan is the team’s research assistant.

Kutney and Putalik joined the work crew that Friday, gently scraping the epoxy into natural cracks in the wood to seal it from moisture. They labored under makeshift tents in the      Architecture School’s fabrication yard, shading the poplar slabs – which weigh about 300 pounds each and were held up from the ground by cinder blocks and 2x2s – from direct exposure to the sun, which could affect the epoxy.

“We have been experimenting with different ways to finish it and ultimately, with a lot of guidance from Mark Kutney, the decided to finish it the way one would finish the hull of a boat,” Putalik said. “It is being soaked with a penetrating epoxy and then several layers of marine varnish on top of that. It won’t change the color and it is not going to be glossy like the hull of a boat would be, but it will have a multi-stage finishing process that will help it be more durable when it is exposed to the elements.”

Duan sees the table project as an extension of her studies.

“Landscape architecture involves designing or renovating spaces for people to gather, encounter and linger, where people feel comfortable being with others and the environment,” she said. “This project … exactly fell into my want-to-do category that both draws my interest and benefits my future career as a landscape architecture practitioner.”

Duan sees this project opening career opportunities in fields such as construction because it helps her translate two-dimensional drawings and 3-D models into a built landscape. 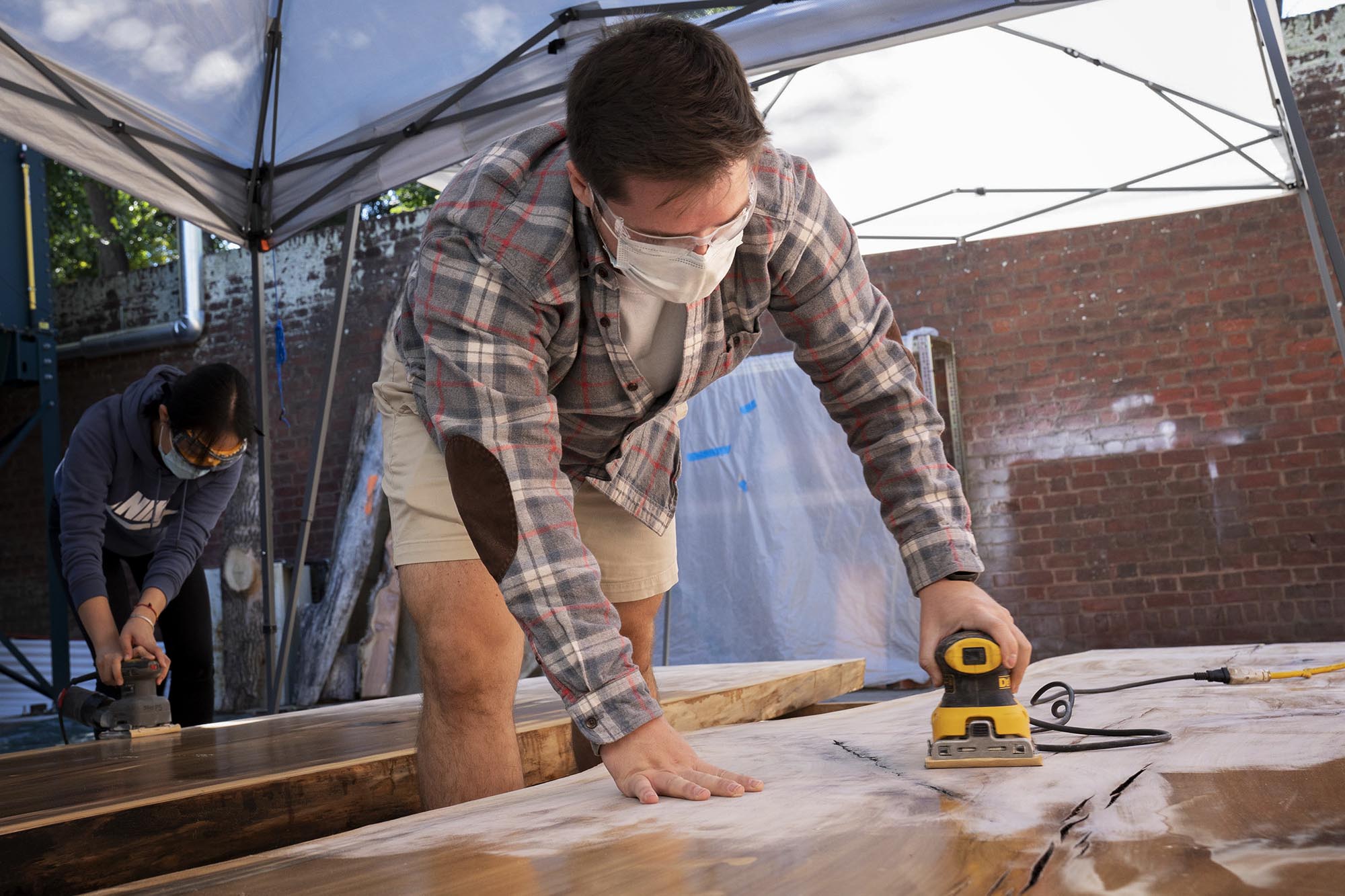 Tim Victorio roughs up the first coat of epoxy so a second coat will adhere better.

“Since we are working on the scarce wood slabs from the poplar trees, we really took every step seriously to avoid screwing it up with careless treatments on the slabs,” she said. “I learned how to design with care, patience and strictness on aesthetics, function and form from Erin as well as the rest of the team members. We spent a long time playing with the digital models and came up with a bunch of iterations.”

While the core team is just a handful of people, they have drawn support from people, organizations and businesses across Grounds and the community, including The Jefferson Trust and Facilities Management.

“We got started last spring with a $9,605 grant from the Jefferson Trust, which we received      in April,” Putalik said. “We were able to stretch that grant, originally for just one table, to create two tables. We’ve since gotten funding for four (out of eight) benches from the Vice Provost for the Arts and will get started on those as soon as the tables are complete.”

When Bartlett Tree Service took down the 100-foot-tall poplar tree, they cut it in long sections to mill for lumber. SKANSKA provided a crane to carefully lower the 10,000-pound pieces to the ground. Otherwise, the tree would have to be hauled off in 12-inch rounds, to make handling easier on machines and crew members.

After the poplar was cut, the logs were stored at Facilities Management’s lumber yard and then UVA Sawmilling brought in a sawyer to cut the slabs.

“Rich Hopkins, the associate director of Grounds, has been generous with his time and helping to pull logs from the pile for us to mill,” Spears said. “The only other necessary equipment has been brought by the sawyers themselves.”

Once the poplar wood had been milled, cabinetmaker Wade Cotton of Timber Made Company dried it – in his vacuum kiln, as the slabs were too long and too thick for the Observatory Hill solar kiln – and then Black Forest Sawmill in Crimora did some additional flattening.

The 4-inch-thick table, built from two slabs of poplar taken from the center of two contiguous logs, is about 25 feet long, tapering from about 54 inches wide at one end down to about 36 inches wide at the other end. 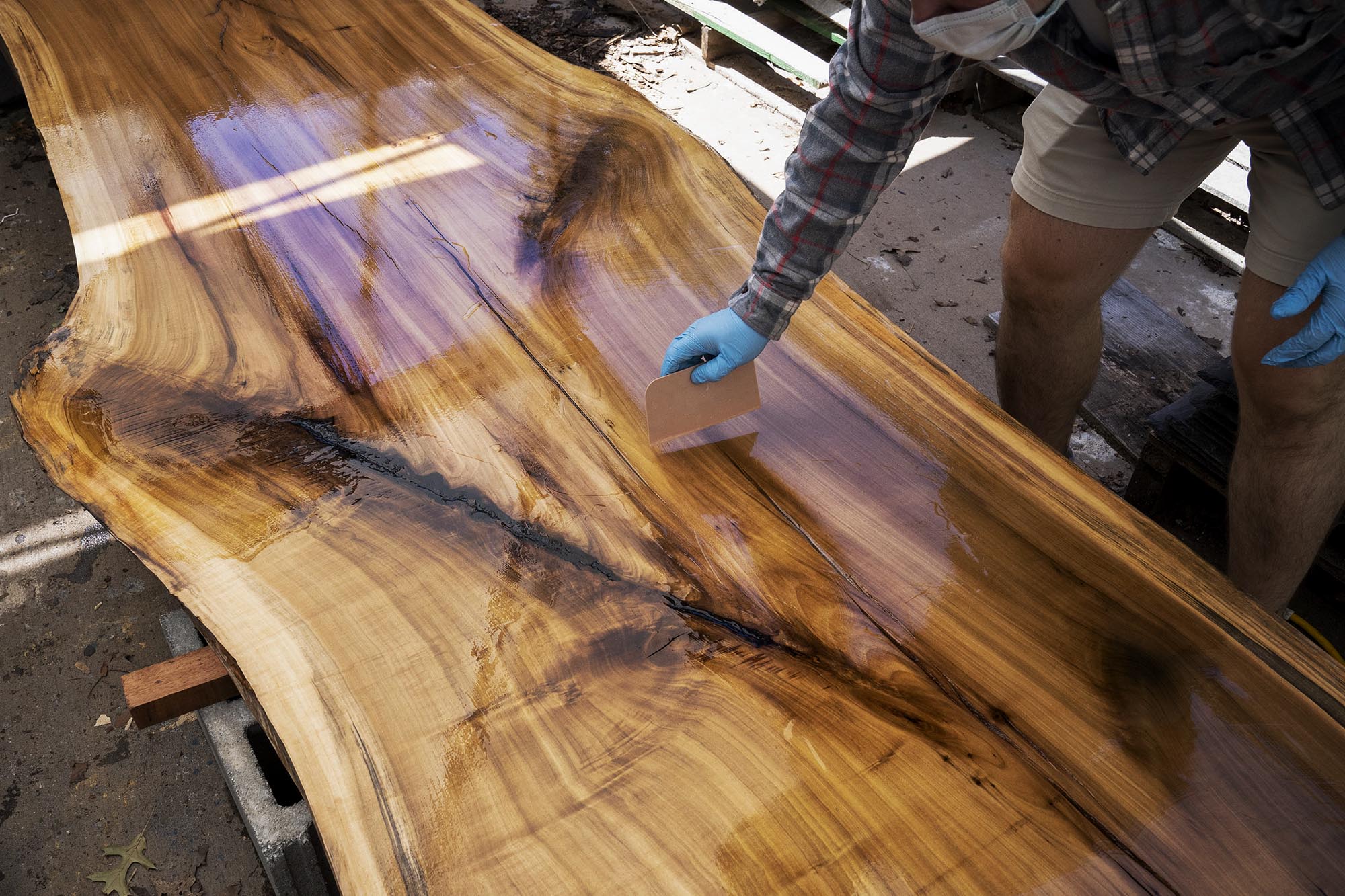 The poplar tabletop has a rough, natural edge and the wood’s surface reflects some of the minerals drawn up from the soil into the tree.

“We’ve designed these two 12-1/2 foot tables so that they can be used separately or placed end-to-end to create a single long table.” Putalik said. “Because of how the slabs were chosen, from contiguous sections of the tree, when the tables are aligned it will be similar to a 25-foot slice through the center of the poplar.”

A tulip poplar draws minerals from the soil into the wood so the heartwood can become colored with different mineral casts. While the colors darken as the milled wood is exposed to air, some of the colors are still visible in the table.

“These slabs have an awesome array of colors present in their heartwood,” Victorio said. “We hope to preserve these with our finishing choices, as they generally mull to shades of nutty brown. Pink, purple, blue, and of course swatches of green can be seen, especially at the butt end, where the log was closest to its roots.”

The table has been mounted on steel plate bases created by Industrial Fabricators of Virginia      Inc. in Fishersville, in an outdoor classroom designed by William H. Sherman, the Lawrence Lewis, Jr. Professor of Architecture, and retired faculty member Warren Byrd of Nelson Byrd Woltz Landscape Architects and SMBW Architects, as part of the south addition to Campbell Hall. The outdoor classroom was built in 2007 and 2008.

“It is a south-facing space designed to create a micro-climate that makes it useable much of the year,” Sherman said. “The walls of the building in the outdoor classrooms are clad in the same slate as the shingles on the side of the building, but honed to create blackboards.” 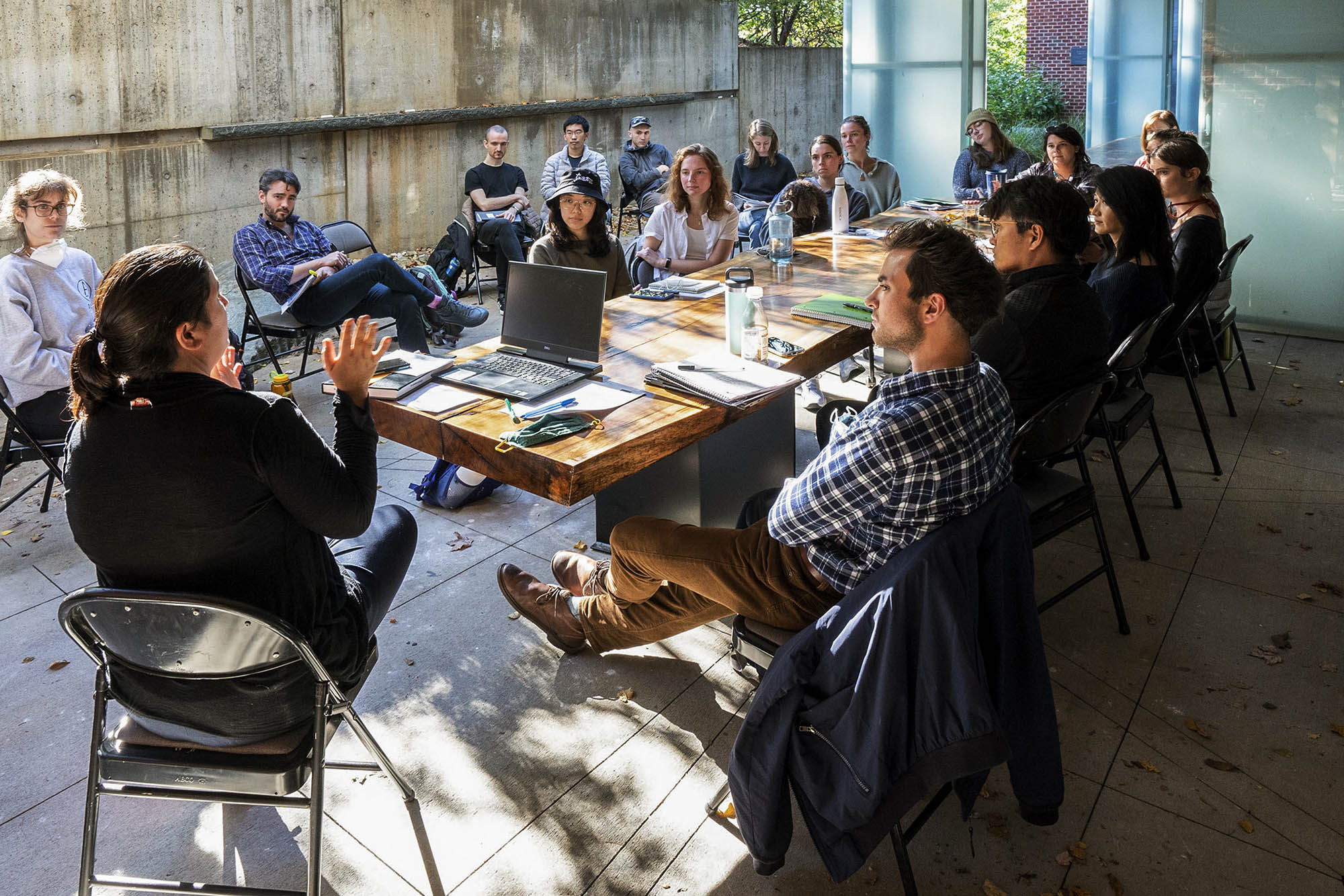 Mounted on steel plate bases created by Industrial Fabricators of Virginia Inc. in Fishersville, the table now resides in an outdoor classroom at the School of Architecture.

Sherman said the poplar table “echoes an early hope that I had had for a pair of long tables that could be used by seminars or groups of students under cover, but in the sunshine most of the year and in the shade of the building during the hottest months, when the sun is higher in the sky. Unfortunately, the space was not furnished at the time that the building was completed, so it is great to see these intentions fulfilled in such a rich and meaningful way.”

Sherman praised the design of the tables, how they relate to the intentions for the space and in their reuse of the wood from a historic tree on Grounds. A group of volunteer students carried the table slabs to the outdoor classroom, and Spears and Victorio bolted it in place on the bases. Once in place, Victorio sanded and varnished the table with three coats of a clear, water-based marine-grade gloss varnish and one coat of a satin varnish. While the classroom is open-     walled, its roof will keep the table partially protected, with the table’s finishes doing the rest.

The table-makers have some funds for matching benches, made from the same poplar tree, to accompany the table.

“There was a really good story here to be told about how we value trees from Grounds at the end of their lives, and how the unusual and beautiful wood that they provide can connect us to our environmental past,” Putalik said. “It relates to projects articulated by Urban Wood movements around the country, and it is central to UVA Sawmilling’s vision of treating this wood as a valuable resource, instead of as waste.”

When Less Is More: How Harnessing the Power of Subtraction Can Add to Life END_OF_DOCUMENT_TOKEN_TO_BE_REPLACED