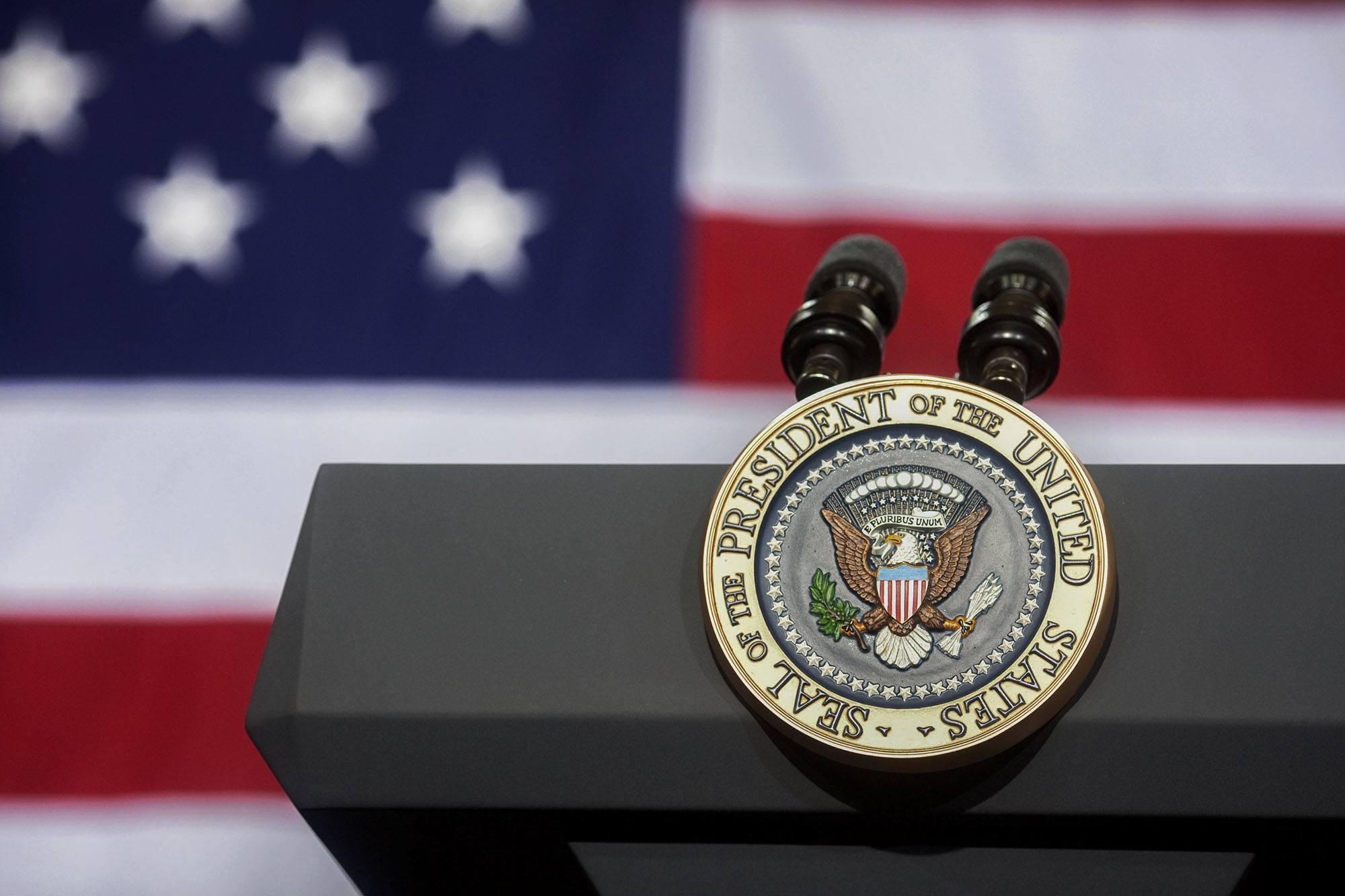 A peaceful and prompt transition of power is crucial to both the health of American democracy and the nation’s security, Janet Napolitano and Michael Chertoff said Friday in a webinar hosted by the University of Virginia’s Institute for Democracy.

“Having a transition that begins right away, getting security clearance to the incoming team, giving the president-elect access to current intelligence – these are all part of the process of preparing, so that when a new administration comes in, they can hit the ground running and not have to figure out what the threats are and what the capabilities to respond are,” Chertoff said.

In addition to Napolitano and Chertoff, Friday’s webinar included David Marchick, director of the nonpartisan Center for Presidential Transition at the Partnership for Public Service, and moderator William Antholis, director and CEO of UVA’s Miller Center for Public Affairs. It was sponsored by the UVA Institute for Democracy, the Center for Presidential Transition, and Citizens for a Strong Democracy, a nonpartisan organization that Napolitano and Chertoff founded with two other former secretaries of homeland security.

Antholis began the webinar with a question about the process of “ascertainment” – a legal process by which the General Services Administration gives the president-elect access to resources and classified information needed during the transition from one presidential administration to another. That process is mandated by the Presidential Transition Act to begin once the results of the election are clear. As of Friday, Emily Murphy, head of the General Services Administration (and a UVA Law alumna), had not yet signed that paperwork.

“The issue of ascertaining the winner of the election [in the GSA] has never been controversial or politicized,” Marchick said. “Many other government agencies have similar responsibilities to act when there is a new president-elect. The Secret Service, for example, expanded its protection around Joe Biden. That is not politicized; the Secret Service just did it. Unfortunately, even the most noncontroversial ministerial acts are being politicized today.” 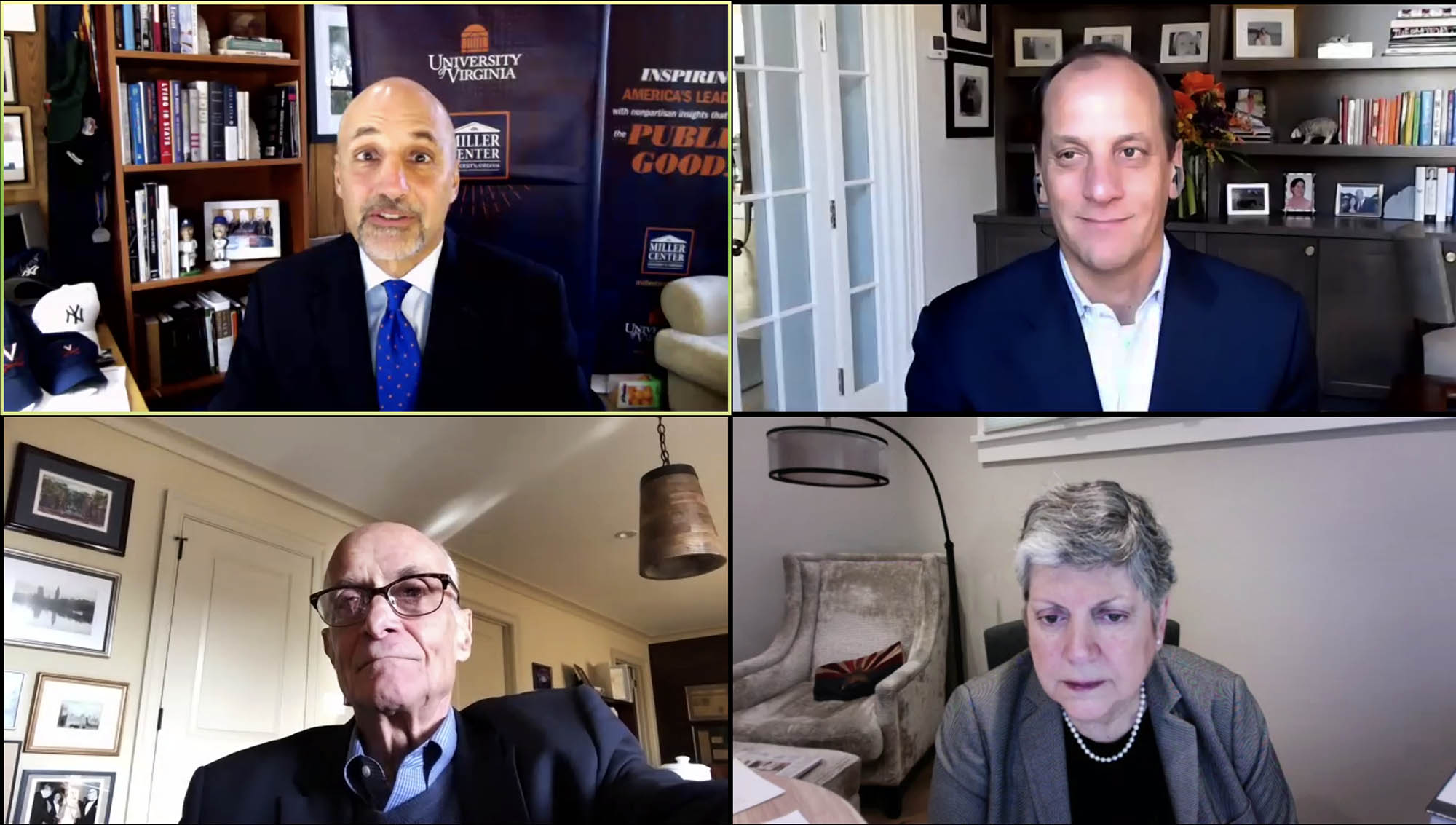 The nation experienced a similar delay in 2000, when the ascertainment process was delayed due to recounts in Florida that eventually determined the winner of the presidential election between George W. Bush and Al Gore. That election was closer than this one, Marchick said, noting that this time, he believes “the outcome is clear.”

Chertoff, who came in with the Bush administration, said the 2000 delay hurt the administration’s ability to respond to national security concerns, especially because it took longer to complete the Senate confirmation process for key positions. The gap became especially apparent during the Sept. 11, 2001, terrorist attacks.

“I was in the Department of Justice on 9/11 and we were shorthanded in senior people, so that we had to essentially do double- and triple-duty to pick up responsibilities that normally would have been taken by others who had been confirmed,” he said.

Napolitano also stressed the importance of a smooth handoff, recalling how, after their own turbulent transition experience, Chertoff and the entire Bush team made it a point to help their successors as much as possible.

“I was then serving as governor of Arizona, and could not fly back and forth frequently to Washington,” she said. “Michael sent leadership from the Department of Homeland Security out to Phoenix, and they had extensive briefing materials prepared for me and my team.

“I give President Bush credit for this. He set the tone and direction for a cooperative transition, and I think it was the gold standard of presidential transitions. President Obama gave the same direction to his administration, and used the Bush transition as an example, but unfortunately many members of President Trump’s team did not take him up on it.”

Still, Marchick said, many members of the Trump administration had been diligently working to prepare for a possible transition over the past year, as the Presidential Transition Act requires. Now, though, they are being held up by the ascertainment issue in the GSA.

“Up until the election, we have seen very professional work within the Trump administration, in the White House, the GSA and other agencies, taking the implementation of this law very seriously,” said Marchick, who works with incoming and outgoing administrations through the Center for Presidential Transition. “There are people who take this very seriously and I hope they get the chance to do so soon.”

All three panelists were hopeful that the GSA will give the green light to release more transition resources very soon.

“I think it is important to point out that there is nothing the precludes starting the transition process while litigation and electoral challenges are going on,” Napolitano said. “President Trump’s litigation plan can continue … but the nuts and bolts of the transition can already get started.”

“I think that is the emerging position of Republicans in the Senate,” he said.

The trio talked about other risks that come with a delayed transition, including the potential for cybersecurity breaches if the president-elect does not have access to secure government servers, the lack of State Department support for calls between the president-elect and foreign leaders, and the leadership vacuum that could come from last-minute firings or resignations in key departments, as has recently been seen in the Department of Defense.

“We are signaling that we are dropping our guard, and that is a very risky thing to do,” Chertoff said.

Napolitano agreed, though she noted that Biden’s governing experience as vice president and a longtime senator could help him navigate the situation.

“It is so important to have a smooth handoff from a national security perspective, and not to have any kind of gap,” she said. “We are fortunate that the president-elect has so much experience, that even with this delay he will be able to catch up quickly, but nonetheless this is an unnecessary risk.”

Chertoff ended the webinar on a hopeful note, expressing faith in the resilience and strength of American democracy.

“We have a resilient system,” he said. “We had a record turnout, it’s been a very smooth electoral process, and this is because we have a lot of unsung heroes, from the citizens who voted to state, local and federal officials who are doing their jobs. That is the strength of America.”

A full recording of the webinar is available on the Miller Center’s YouTube channel. You can also find more coverage and analysis of the presidential election and transition on the Election 2020 and Its Aftermath page, maintained by the UVA Institute for Democracy.

What’s Next for UVA’s Class of 2022? END_OF_DOCUMENT_TOKEN_TO_BE_REPLACED