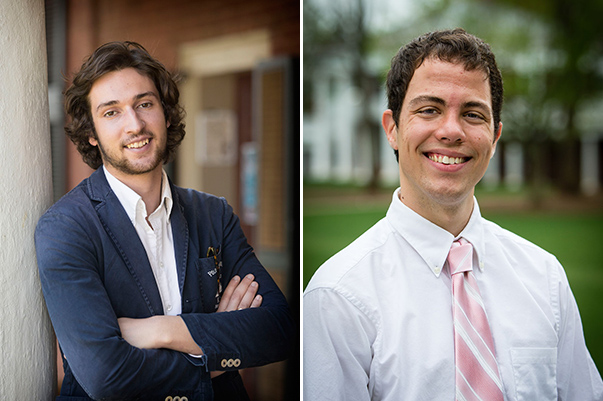 Evan Behrle and Charles Tyson, both fourth-year students at the University of Virginia, have received a 2014 Rhodes Scholarships.

The scholarships, valued at between $50,000 to $175,000, fully fund two or three years of study at the University of Oxford in England. Behrle and Tyson are the University’s 49th and 50th Rhodes Scholars.

U.Va. and the U.S. Military Academy were the only two public institutions to have more than one scholar selected. The only schools with more selected scholars than U.Va. were Harvard (six), Yale (three) and Stanford (three) universities.

Behrle, 21, a fourth-year honors politics major in the College of Arts & Sciences, wants to pursue a master’s of philosophy in comparative social policy at Oxford, with an eye on working on urban revitalization projects.

Tyson, 21, who is majoring in political and social thought and English in the College, will pursue two one-year master’s programs, one in Victorian literature and another in history of science, after which he plans to return come back to the U.S. for a Ph.D. in English literature.

Both Behrle and Tyson expressed surprise at being selected.

“It was an absolute shock, because I was pessimistic going in,” Behrle said. “It is a surreal and overwhelming feeling.”

“This is a huge surprise,” Tyson said. “I never expected to win. When they called my name I thought I’d heard wrong.”

The two students are planning divergent futures. Behrle is seeking a synthesis of disciplines to pursue holistic solutions to what he views as fundamental failures of contemporary society, while Tyson wants to pursue a more academic life.

Behrle said the Rhodes will allow him to study a variety of disciplines to help him work toward this synthesis.

“I don’t think pure public policy was enough, but I am nonetheless interested in working to formulate policy for a city government,” Behrle said. Specifically, he would like to help cities, including his native Baltimore, “continue their shift toward treatment and away from incarceration for issues of drug abuse and addiction.”

Tyson views the Rhodes as a “life-changing event” for him, with the opportunity to live abroad, meet new people and face new challenges.

“My dream is to be a writer and a professor,” he said. “As a product of public schools, I hope to work at a state institution. I’m inspired by the powerful impact a liberal arts education can have on a person. I’m a case in point: the time I’ve spent at U.Va. learning from books, professors and fellow students has changed my life indelibly, and for the better. I would love to have the chance to mentor and teach students, to cultivate their talents, and to write about serious ideas in a way that general readers can understand.”

“You could maybe think of it like a public policy degree that is simply wider in scope,” Behrle said. “I would be particularly interested in examining how, and how successfully, different states have reckoned with poverty and social exclusion in post-industrial urban spaces.”

Behrle  believes there is a crisis in “post-industrial society” because people are not paying attention to the structures within societies that allow them to flourish.

“This is a failure of ‘politics’ in the most basic, classical sense of the word – a failure, in other words, to understand that ‘man is a political animal’ to quote Aristotle, and that we therefore have to pay attention to more than just the barest guarantee of individualized rights,” Behrle said. “Which is all just to say that I am attracted to public policy and to politics because they hold within them the potential to solve the most pressing problems of our age, both in their consequences and through their practice.”

Behrle is an Echols Scholar and a Jefferson Scholar, chairs the University’s Honor Committee,  and is president of One in Four, an all-male sexual assault peer education group. He is also vice president and recruitment chair of Phi Delta Theta fraternity and a member of the University Guide Service and the Raven Society. He is a summer orientation leader, a site leader for Alternative Spring Break and a recipient of the Gray-Carrington Memorial Scholarship Award.

“Evan is an exemplary representative of U.Va., cares deeply about our community, and has worked tirelessly to implement meaningful initiatives,” said Katherine V. Walters, director of national scholarship and fellowship opportunities for the Center for Undergraduate Excellence. “He’s bound to create positive change at Oxford and beyond. It has been an absolute pleasure to work with him this past year.”

Professor Gerard Alexander, director of the politics honors program, praised Behrle for his deep commitment to the honor system.

“That isn’t about fame or power,” Alexander said. “It’s about helping make sure that his community – in this case the U.Va. community – is held together by bonds of trust, justice, and fairness.”

Alexander also lauded him as a superb student and for his dedication to try to solve urban problems.

“He takes serious issues to heart,” he said. “From the day I met him two years ago, he has been deeply engaged with issues of urban poverty, which he had stared in the face for years in Baltimore. When I met him, he had already read widely about urban poverty, was under no illusions that it is a simple problem to solve, but was equally convinced that we have to do something about it. He’s been studying and thinking about it ever since.”

Tyson, of Chapel Hill, N.C., is a Robert Kent Gooch Scholar, Beinicke Scholar and an Echols Scholar. He received Intermediate Honors and is a Lawn resident. He is a member of the Raven Society and was elected to Phi Beta Kappa as a junior. He also received the Wagenheim and Pruden scholarships, which are nominated and awarded by the faculty of the Department of English.

Tyson also is executive editor of The Cavalier Daily, the independent student newspaper, where he writes editorials and edits opinion and editorial content. He was the first journalist to file a public-records request in response to the resignation and re-instatement of University President Teresa A. Sullivan in June 2012. He received a third-place award in general news writing from the Virginia Press Association for coverage of Sullivan’s resignation and reinstatement.

He is also on the undergraduate advisory board of the Institute of the Humanities & Global Cultures and has served as a senior resident and resident adviser in first-year dorms, and as a summer orientation leader.

“It has been a true joy and honor to work with Charlie,” Walters said. “His upbeat nature is infectious; he is a genuine and thoughtful person and scholar who will have a meaningful impact on our society. The Rhodes Trust is lucky to have him as part of their community.”

Allan Megill, Thomas C. Sorenson Professor of Policy and Social Thought in the Corcoran Department of History, praised Tyson for the clarity, vigor and eloquence his writing and scholarship.

“Charlie Tyson is among the most impressive students I have encountered in my 22 years at the University of Virginia, and I have encountered quite a few, many of them connected with [political and social thought],” Megill said. “I am hard-pressed to think of any of my other students who exceed him, and there are few who equal him.”

Karen Chase, Linden Kent Memorial Professor in the Department of English, lauded Tyson’s devotion to the world of ideas.

“Charlie Tyson is a superstar who also knows humility and generosity,” Chase said. “Thinking is for him what makes action possible. He possesses an abundance of energy; he must live three days in every one. And he manages to leave his signature on everything he does. He will bring as much luster as he gets from the Rhodes.”

Created in 1902 in the will of Cecil Rhodes, a British philanthropist and African colonial pioneer, the scholarships are awarded on the basis of high academic achievement, integrity, a spirit of unselfishness, respect for others, potential for leadership and physical vigor.

What’s Next for UVA’s Class of 2022? END_OF_DOCUMENT_TOKEN_TO_BE_REPLACED