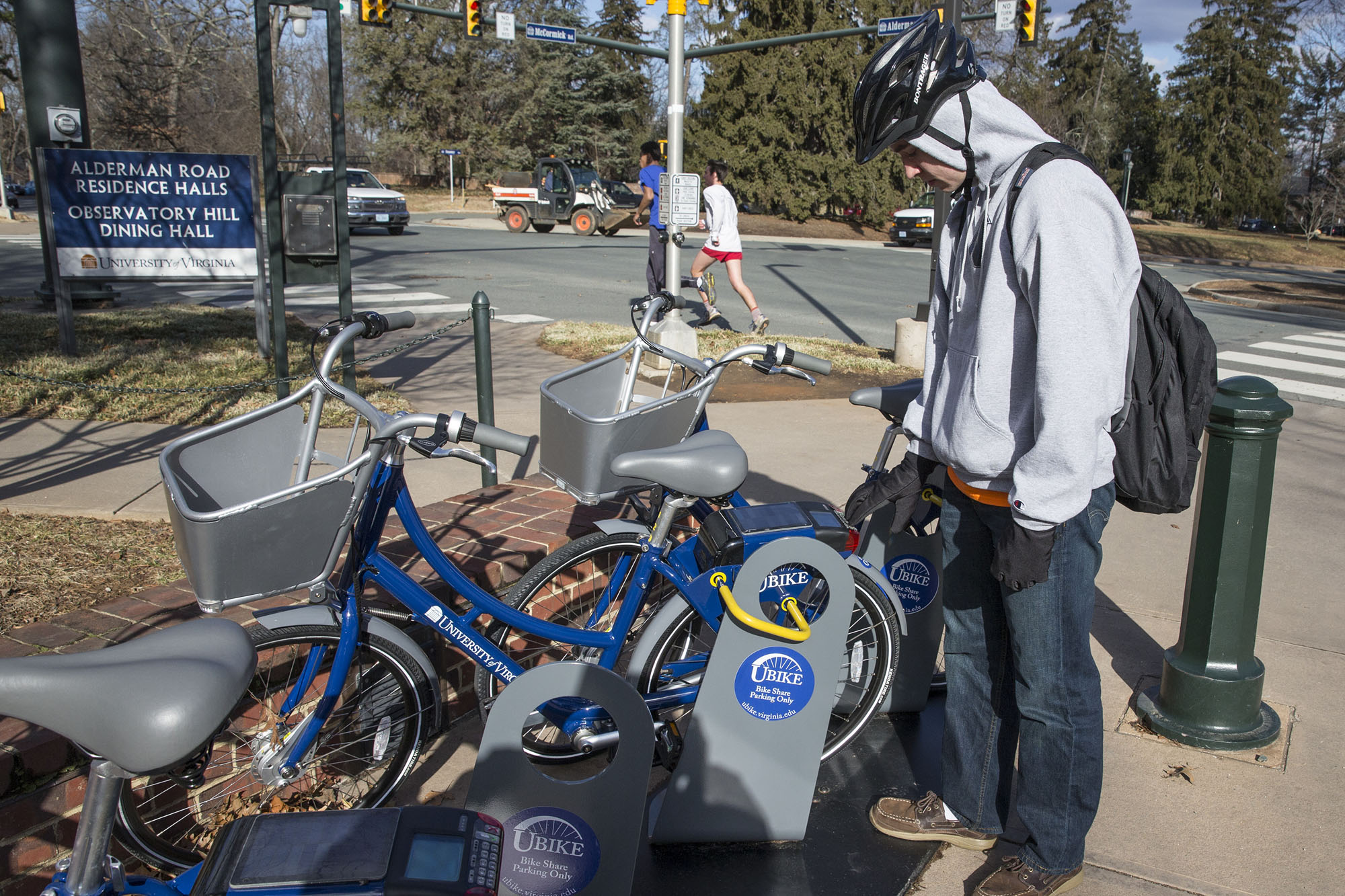 Need to get across Grounds in a hurry in the middle of the day? The University of Virginia is providing a new option.

The University’s Department of Parking and Transportation is offering bicycles for casual users – students, faculty and staff – through a new bike-sharing program, called UBike. UBike members use an account number or a coded membership card to unlock a bicycle from a special rack, ride it anywhere on Grounds or in the community and return it to any UBike rack.

“This is for someone who wants to get from the Observatory Hill Dining Hall to Clark Hall quickly, or from the Architecture School to Medical School fast,” said Rebecca White, director of Parking & Transportation. “We hope this will encourage more bicycle ridership on Grounds and enhance midday mobility.”

White estimates that each bicycle will be used for five to six trips per day, with a maximum of 90 minutes per day of riding time for a single UBike member. Membership rates vary; there are additional charges if the bicycle is not returned to a station after the ride, or if the bicycle is kept beyond 90 minutes in a day. The University has established 18 stations, servicing about 120 bicycles around Grounds.

Several stations are along McCormick Road, from Observatory Hill Dining Hall to Alderman and Clemons libraries. Additional stations are at the Newcomb Plaza, Bryan Hall, the School of Architecture, on Hospital Drive near The Corner, at Stacey Hall on West Main Street and at Jordan and McLeod halls in the Medical Center precinct.

“The stations were located to provide a balanced system that would constantly have bikes moving within it, not at one endpoint from which all the rides would be inbound in the morning and outbound in the afternoon,” White said. “This service area gives us the possibility of a larger system extending to North Grounds and possibly into the city of Charlottesville, but we have much to consider before expanding.”

Now that the program is live, bicycle users can sign up for UBike online or through a smartphone application. Membership plans include a $5 daily plan, a $20 monthly plan, and a $60 annual plan for U.Va. affiliates, who also can purchase a six-month plan for $30. Community members not associated with the University will pay $80 for an annual plan.

“We will be able to map the routes people are taking so it can help us plan bike improvements, and system expansion will be based on response,” White said.

White said the idea started as a student project in 2008 and was studied and implemented with support of federal money that Parking and Transportation accessed through the Virginia Department of Transportation’s Transportation Enhancement Program. Social Bicycles, a company that manages similar systems across the country, is providing the bicycles, hardware and software, while a local firm, Blue Ridge Cyclery, is responsible for the bicycle maintenance and system redistribution.

“These bike-share programs are becoming more and more common,” White said. “Long-established systems are running in Washington, D.C. and New York. Our system will be very similar to live systems in Phoenix and Tampa. Some college campuses have them in different forms, such as a ‘bike library,’ where you can ‘check out’ a bike. We decided on this system because we want it to complement the existing transit system and enhance midday mobility options.”

Members are responsible for providing their own helmets; each will receive a discount coupon from Blue Ridge Cyclery, White said. She suggested that riders perform a pre-ride safety check of the tires, brakes and lights.

Technology on the bicycle allows the UBike program to track trips taken, miles traveled, calories burned and the carbon offset. “During the beta testing, which took place in December, we had 41 riders travel 124 miles,” White said. “That amounts to about 58 pounds of carbon avoided and about 2,632 calories burned.”

What Is the ‘4th Side’? END_OF_DOCUMENT_TOKEN_TO_BE_REPLACED