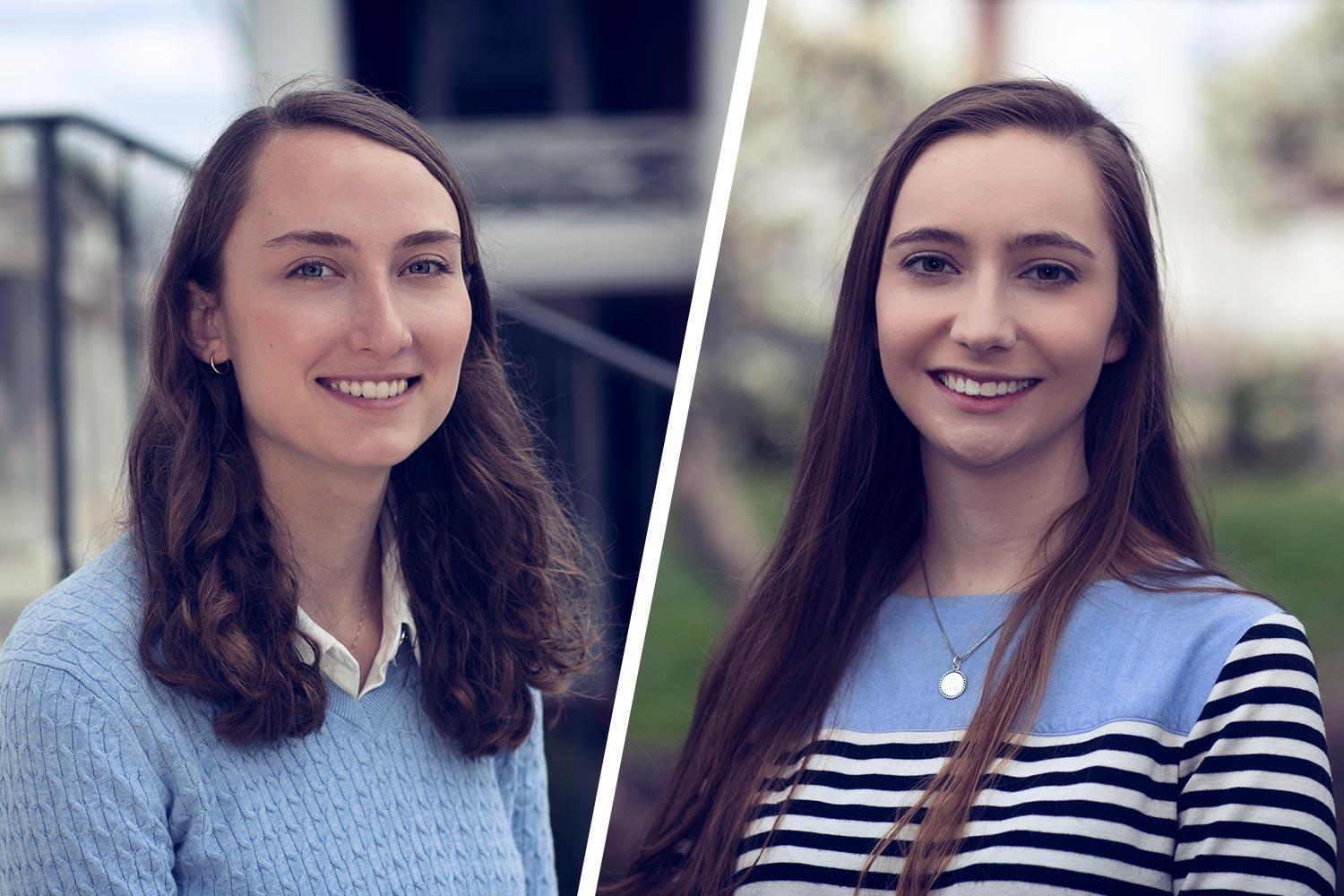 Investigating the impact of anti-cancer drugs on the heart and pursuing treatments for multiple sclerosis have netted two University of Virginia students prestigious research awards.

Monika Grabowska of Charlottesville, a third-year biomedical engineering major who is minoring in computer science, and Melanie Piller of Herndon, a third-year biology major, will receive Arnold and Mabel Beckman Foundation Scholarships.

The University is one of 10 schools nationwide participating in the Beckman Scholars program, largely because of its commitment to quality undergraduate research. UVA received a three-year grant worth approximately $156,000 to fund scholarships for two undergraduate researchers per year working in chemistry, biochemistry and the biological and medical sciences. The scholars are selected locally and the grants provide $21,000 in stipend and travel for two summers and one academic year. Each winner’s mentor is provided with an additional $5,000 to be used in direct support of their scholar.

“These are some of the highest awards in the nation for excellence in undergraduate research,” said William Guilford, an associate professor of biomedical engineering who directs the Beckman Scholars program. “Our students always deliver exceptional research proposals, living up to Arnold Beckman’s guiding principle that ‘there is no satisfactory substitute for excellence.’ We are fortunate to have such incredibly hard-working undergraduate scientists at UVA, guided by such dedicated research mentors.”

“While these drugs have revolutionized cancer therapy, they have been associated with adverse side effects such as cardiotoxicity, which may then lead to hypertrophy,” (or enlargement) Grabowska said. “This is an important issue for millions of cancer patients, as cardiovascular disease is the leading cause of death among long-term cancer survivors and has been associated with use of these chemotherapeutics.”

Jeffrey J. Saucerman, an associate professor of biomedical engineering, is impressed with the clarity Grabowska brings to a project.

“Monika has a natural feel for the right way to organize and explain her science,” Saucerman said. “She has a rather unique combination of independence and scientific intuition. She can fill in the gaps and make extensions to her project – not just independently, but in a way that increases its scientific impact.”

Piller is studying a signaling pathway in the developing nervous system that could have applications for the treatment of multiple sclerosis.

“I’m fascinated by cell interactions during development, and I think the field has a lot of potential for regenerative treatments,” Piller said. “This is an amazing opportunity to pursue independent research and share it at the national level.”

Sarah Kucenas, associate professor of biology, cell biology and neuroscience and director of the Department of Biology’s Distinguished Majors Program, said Piller has shown remarkable growth as a scientist while working in her lab.

“She is truly functioning like a graduate student in the lab,” Kucenas said. “A research proposal she has submitted was 100 percent written and conceived by her. I was blown away by the clarity and maturity of the thinking, and I am excited for her to do these experiments. They’re elegant, sophisticated and will, most importantly, move the science in my lab forward. I rarely get to say that when speaking about undergraduate projects.”

Kucenas said Piller was a pleasure to have in the laboratory and is always hard-working.

“She is a natural fit for my lab environment and contributes in so many ways,” Kucenas said. “She’s funny, energetic and goes out of her way to help others. She also asks insightful questions during our lab meetings and is genuinely passionate about science. I have no doubt that she is destined for a stellar career in scientific research.”

Grabowska said the Beckman Scholars program will prepare her for graduate school and her future work.

“The scholarship will allow me to devote more time to my research and help me to develop and refine my computational and wet lab skills,” she said. “I will present my research at several conferences, which will provide me with an opportunity to discuss my results with other researchers in the field. I plan to submit a manuscript describing my findings to a peer-reviewed scientific journal.”

A Rodman Scholar, Grabowska is currently the technology and advising committee chair of the Undergraduate Research Network. She is also on a project team that received the 2018-19 Jefferson Public Citizens Grant for its project, “Novel Water Filtration in Nicaragua,” to study the feasibility and effectiveness of biosand water filters in a rural community in Nicaragua.

She was a teaching fellow for “Computational Biomedical Engineeringand a grader for “Applied Statistics and Probability.” She has worked on software projects in the Minor Lab in the Department of Molecular Physiology and Biological Physics. Through Madison House, Grabowska volunteered in the UVA Medical Center Inpatient Cardiology unit and is currently a volunteer for the Brain Attack and Neurological Deficit Identification Tool Study, collecting data to aid in the development of a tool that will detect neurological deficits in acute stroke patients using machine learning.

She presented her research, “Identifying the Mechanisms Mediating TKI-Induced Cardiac Hypertrophy,” at the 2017 Biomedical Engineering Society Annual Meeting in Phoenix. She is also an editor for the News and Careers section of the Journal of Young Investigators, a student-led international research journal.

A graduate of Albemarle High School, Grabowska plans to enter an M.D.-Ph.D. program and pursue a career as a clinician-scientist.

Piller said she was thrilled to be chosen, especially for the impact it will have on her work.

“I look forward to continuing my research with the support of the program,” she said. “This is an amazing opportunity to pursue independent research and share it with the greater scientific community.”

Piller, who is enrolled in the Distinguished Majors Program in Biology, is the president of the Virginia Triathlon Team. She volunteers with Madison House to teach chess to children at the Boys and Girls Club of Central Virginia through the ACES Chess Program.

In her second year, she spent the fall semester in Strasbourg, France, researching cardiac valve development at the Institute of Genetics and Molecular and Cellular Biology through the Institute for Field Education, a study-abroad program designed for research and language development. In this program, she received highest honors for a talk and thesis, in French, titled “Factors Influencing the Development of the Outflow Tract Valve.”

Before attending UVA, Piller studied metabolic diseases at the Center for Genetic Medicine at Children’s National Medical Center in Washington, D.C. A graduate of the Thomas Jefferson High School for Science and Technology, she plans to pursue a Ph.D. in biology and a career in biomedical research.

The Beckman Scholars will enroll in an “Applied Technical Writing” course taught by Kay Neeley of the Department of Engineering and Society. This course, funded by the offices of the Executive Vice President and Provost and of the Vice President for Research, is also available to a small group of other students and will prepare them for writing about their research for publication.

“The objective is for student-scientists to learn what gaps remain in their work so that they can fill them before leaving UVA and their lab,” Guilford said. “It’s often through writing for publication that professionals find those gaps.”