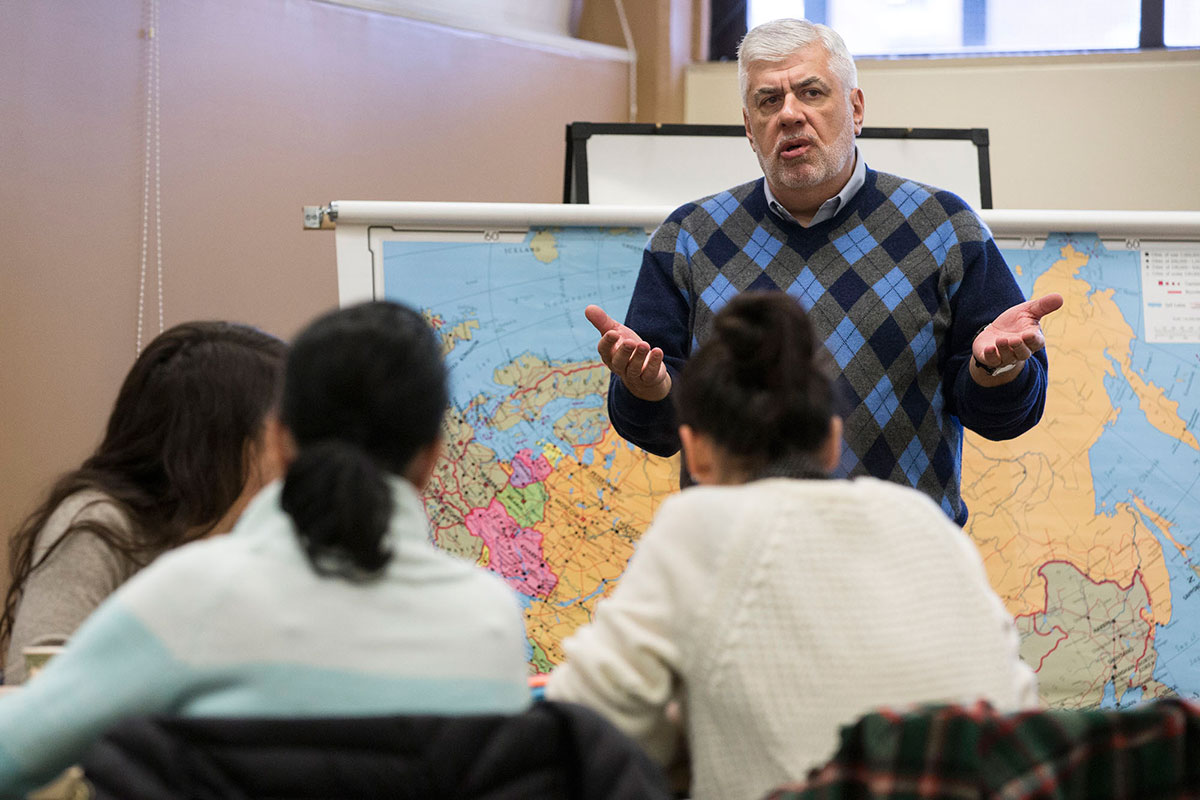 As students compared notes for a test, they were concerned about the capitals of the former Soviet republics and the order of Russia’s leaders – who came first, what was the relationship between the Mensheviks and the Bolsheviks, how Lenin felt about Stalin, and the goals of the “indigenization” policy.

And as Yuri Urbanovich, a lecturer in politics and Slavic languages and literatures who was born in Georgia, in the U.S.S.R., taught a University of Virginia January-term course on “Post-Soviet Political Challenges: Nationalism, Ethnic Conflict, Separatism and Irredentism,” he raced to bring the students up to speed on more than 1,000 years of Russian history so they could understand the present.

“When I teach this, I have to first give the basics of history for both the Soviet Union and for Imperial Russia,” he said. “I have to address many of the riddles of Russian/Soviet politics through increasing students’ understanding of the history and culture on which it builds. Without solid amount of background it is impossible to understand what goes on today.”

He said many students come in to the class with different backgrounds and different levels of understanding.

“I have to get them to a common denominator and move them on as a whole group,” he said. “Each year there are a couple of students who think the U.S. fought against the USSR in World War II. They need to understand that there was a war-time cooperation that failed to continue to be a post-wartime cooperation. There was a clash between two universal and irreconcilable ideologies.”

Because of this clash, he has to overcome stereotypes, prejudices and misperceptions the students carry over from the Cold War, in which the Russians were the “bad guys” in many movies, books and television programs.

“By the way, Thomas Jefferson mentioned in one of his letters that Russia was a most friendly nation to the United States.”

This closeness is one of the things that surprised second-year student Jessica Stanfield,  of Chincoteague, a foreign affairs and Spanish major who took the class because she did not know a lot of the history between Russia and the U.S. She was surprised by how much Russia and the U.S. cooperated before the Russian Revolution.

“It’s been a very intense week,” she said. “I’ve learned that there is a lot I don’t know. This will help me with understanding the world – and now there are several more things I want to learn.”

Urbanovich also impressed upon the students the vastness of Russia, which encompasses numerous ethnicities. David Dee, a second-year foreign affairs major from Singapore, was surprised with Russia’s diversity.

“I have a better understanding of how multinational Russia is and how they have used affirmative action to get the minorities involved,” he said.

Peter Scaturro, a third-year foreign affairs major from Bedford, New York, said he took the course to expand his knowledge of Russia and put things in perspective.

“There is tremendous multiculturalism and less than half of the people were ethnic Russians in the Russian Empire,” he said. “And the Eastern Orthodox Christianity has had a tremendous influence on Russia.”

Not all of Urbanovich’s students were as surprised by what he taught, including Tatyana Windsor  of Stafford, a third-year foreign affairs major who was born in Ukraine and raised in St. Petersburg, Russia.

“It is hard for me to be surprised, but I have added some facts to what I have known,” she said. “Professor Urbanovich is good at compressing so many facts in a short period of time. He presented several centuries of Russian history in four days.”

Windsor and Urbanovich said that Russian leader Vladimir Putin was facing many complicated issues, and that Americans needed a deeper understanding of Russia.

“I always learn from my students and I have noticed a growing interest in Russia and the post-Soviet region,” Urbanovich said. “Russia is getting up off its knees and is being a stronger international actor.

“On the other hand, there is an increased demonization of Putin in the mass media. As Henry Kissinger put it, ‘This is not a policy, but an alibi for not having a policy.’”

Windsor said the course, which requires students to commit to long days and extensive reading, has forced her to stretch more than she thought she could and to be disciplined to absorb the information.

“My favorite part of the class is when the students give their presentations, and I can see the critical thinking and analytical skills start to work in them,” Urbanovich said. “There is an old Greek wisdom that ‘a student is not a vessel to be filled, but a torch to be lit.’”

A Year We Will Never Forget: 2019-20 in Review END_OF_DOCUMENT_TOKEN_TO_BE_REPLACED

‘What Will You Carry With You?’ Remarks From UVA President Jim Ryan END_OF_DOCUMENT_TOKEN_TO_BE_REPLACED