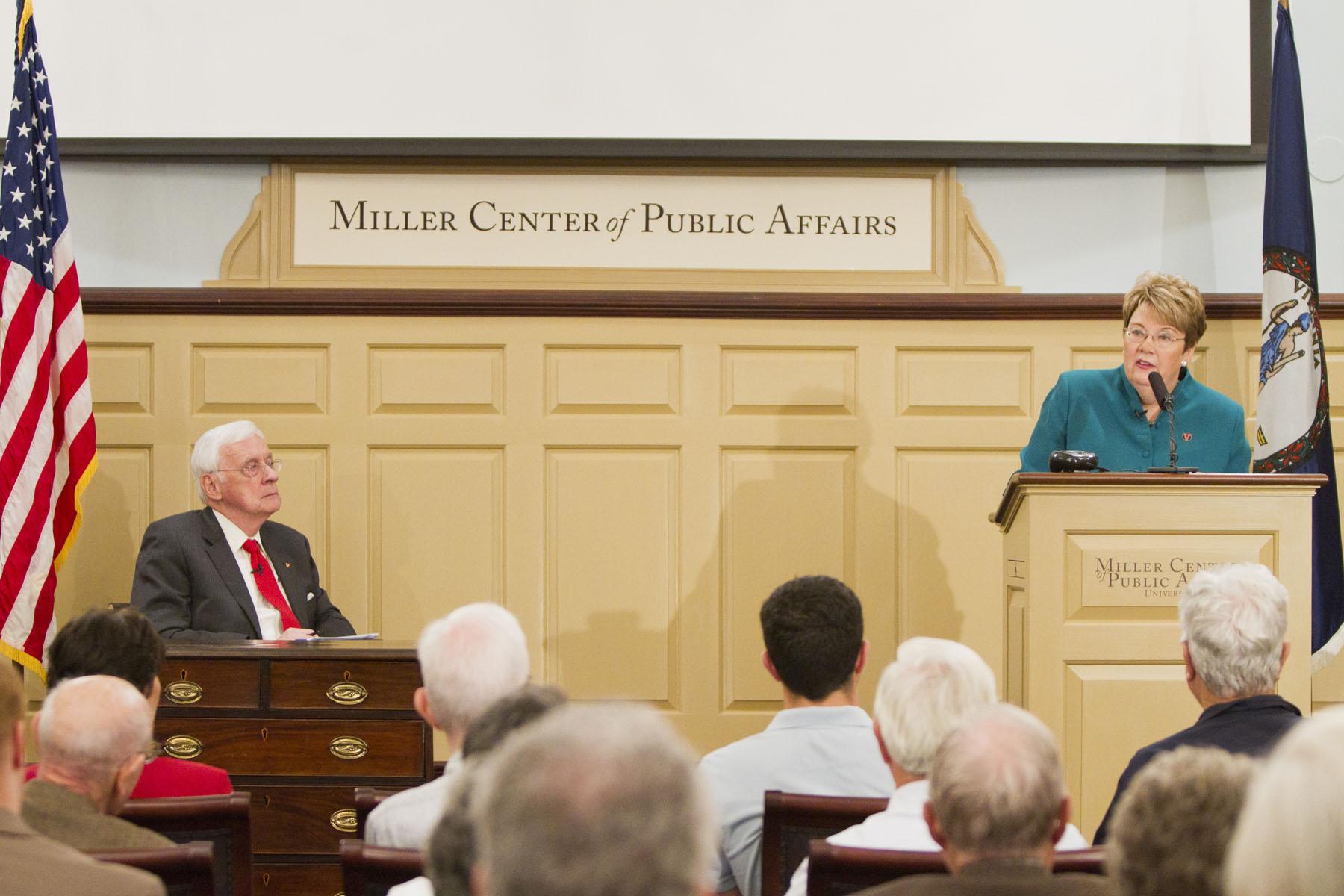 September 7, 2011 — Mired in a weak economy and fearful of another recession, Americans must turn to a time-tested engine for growth – its higher education system – to keep pace with the rest of the world, University of Virginia President Teresa A. Sullivan said Wednesday at the Miller Center.

"Our colleges and universities have the necessary elements – human talent, a culture of cross-disciplinary collaboration and a long-view perspective – to lead to a new, sustained renaissance in American innovation and economic growth," she told about 200 people who had turned out for the first of the Miller Center's fall forums.

Sullivan's talk, titled "Higher Education as the Engine of the American Economy," and the following question-and-answer session were streamed live on the Miller Center website. Video of the speech will be posted soon, and the program will also air on Virginia's public TV stations.

Reminding her audience how the Russians' Sputnik launch in 1957 spurred an era of greater investment in science research and education, Sullivan recounted some of the advancements and inventions that have come out of universities: Vitamin D-fortified milk, the first general-purpose computer, fluoride toothpaste, retractable seatbelts – and Gatorade, developed by University of Florida researchers who noticed athletes becoming dehydrated during games and practices.

"Apparently, their invention worked," she said. "The football team won the Orange Bowl the following year."

But universities don't just come up with ideas, Sullivan said. Their innovations have the potential to create jobs – thousands of jobs. Case in point: Google, which had its beginnings at Stanford University, thanks to a National Science Foundation grant, now employs more than 24,000.

"That investment cycle came full circle last year, when Google announced that it would begin investing in university research through its Focused Research Awards program," she said.

Here in Charlottesville, two U.Va. faculty members, from the School of Engineering and Applied Science and the School of Medicine, started a company based on their instrument that detects the genomic response of human blood cells to new drugs. Just two weeks ago, HemoShear received a $4.3 million National Institutes of Health grant to develop a database that will allow researchers to profile the effects of 50 drugs on the human blood vessel system.

"HemoShear is one example of the virtuous cycle of investment, discovery and creation that improves the human condition," she said.

Reductions in federal research support and state funding have come at a perilous time for colleges and universities, Sullivan said, as competitive economies in China and India are ramping up their investments.

"These nations are investing in the research capacities of their universities because they know that this investment is the key to competitive success in the 21st century," she said. "In the U.S., we risk losing our edge because we are pulling back at precisely the time that other nations are investing heavily in scientific research and in higher education generally."

Another threat to universities is the mistaken belief that undergraduate teaching and learning are incompatible with research, Sullivan said.

"I would argue the opposite point, that participation in research enriches and improves teaching and learning," she said, citing a Curry School of Education study recently published in Science demonstrating that graduate students who taught and did research performed better at their research than those who only conducted research.

"Connecting research to teaching creates another virtuous cycle – one in which research and teaching reciprocally improve each other," she said.

Aside from research and innovation, universities provide their students with education that in the long run will result in greater economic output, Sullivan said, quoting a Brookings Institution study that showed each year of additional education attained by the adult population increases a country's economic output by 2 percent.

That's the basis, she explained, of a key goal of Gov. Robert F. McDonnell's Top Jobs legislation – to increase the number of degrees earned by Virginians by 100,000 over the next 15 years. "Because more education equals greater economic output and better quality of life for all citizens," she said.

Sullivan called for renewed higher education investment and more public-private partnerships, such as U.Va.'s Venture Summit, which attracts venture capitalists to Grounds to hear about faculty and student innovations.

"Perhaps more than ever, we need our universities to function well and to receive adequate support, because universities are uniquely well-suited to tackle the big, complex problems we are facing as a society – issues like climate change, disease control, economic turmoil and other multi-faceted problems," she said.

At the same time, the importance of a broad education, including the liberal arts, can't be overlooked, Sullivan said, responding to a question about the growing trend toward anti-science and anti-intellectual thinking.

A rigorous education based in the liberal arts, she said, "allows students to develop a good grip on critical thinking, how to dissect an argument and how to recognize a false argument."