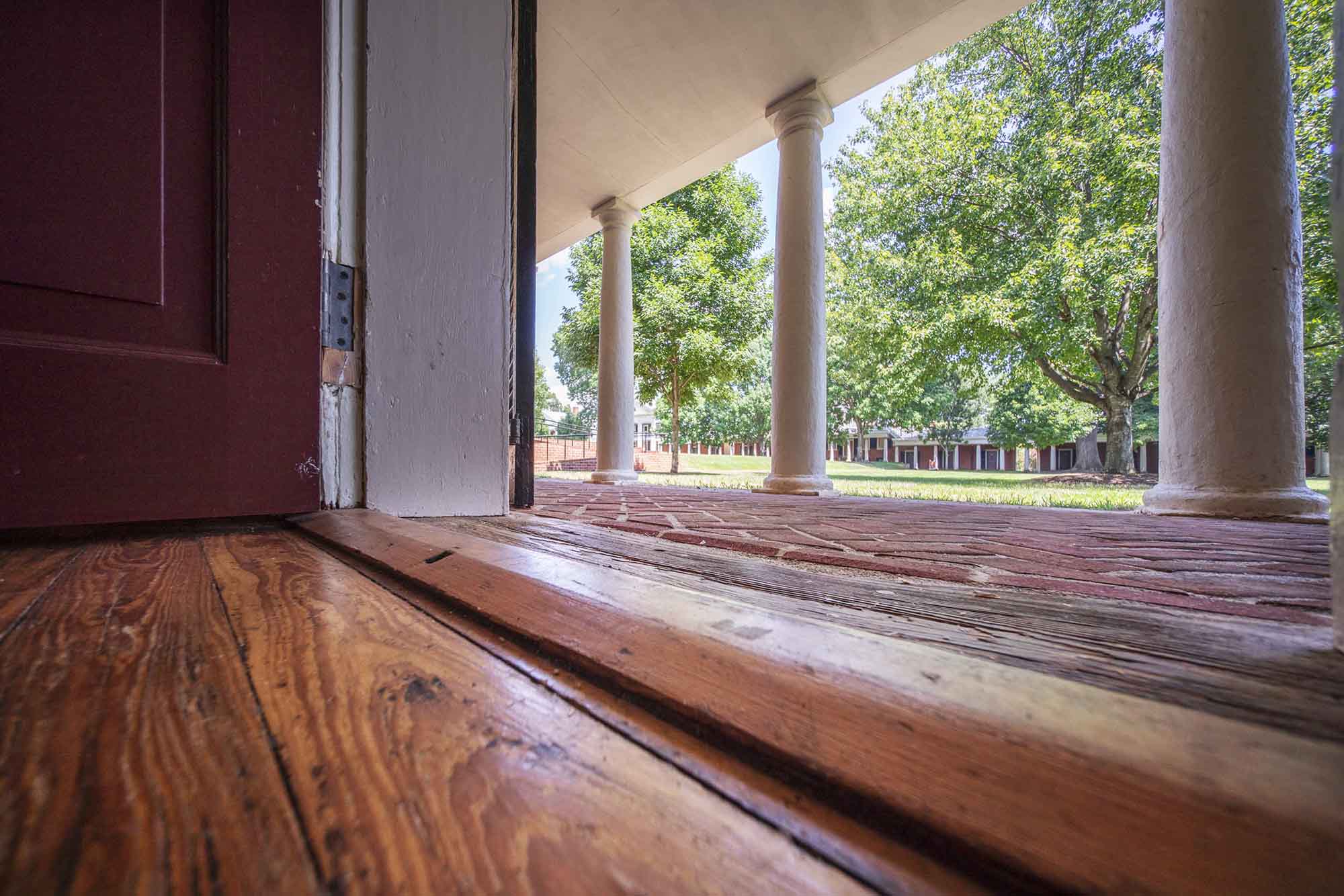 Historic masons Tim Proffitt and Robby Kolb carefully slathered mortar on the angled concrete pad, pressed new bricks into place in their traditional herringbone pattern and tapped them down with their trowel handles. The new bricks, replacing ones installed in the 1970s, smoothly sloped away from the West Lawn rooms, dropping three inches across the nine-foot width of the walkway. The high side of the walkway is now level with the room entrance, eliminating the step up.

The masonry work is part of the University’s efforts to adapt two student Lawn rooms to accessibility standards laid out by the Americans with Disabilities Act. Being selected to live in Lawn rooms in Thomas Jefferson’s original Academical Village is considered a high honor, but until this summer, none of the 200-year-old rooms were ADA-compliant.

Besides building an entrance ramp, the room makeovers, in Nos. 23 and 25 West Lawn, included lowering a light switch, raising a receptacle, adding a lower shelf and moving down the closet rod.

“The largest intervention on the interior is the sink,” said Amy Moses, a project manager with Facilities Management. “While it was at the correct height, the existing plumbing lines blocked proper clearance under the sink for a forward approach. To facilitate clearance, the plumbing was placed into a previously abandoned pipe chase behind the cabinet. We also lowered the mirror and added a new light fixture in the sink closet.”

The new brickwork that brings the exterior walk to the same level as the doorways spans the width of five rooms, meaning more West Lawn rooms could be adapted to ADA requirements if needed.

“This section of rooms was chosen for multiple reasons, one being that the thresholds were the lowest in comparison to the existing pavers, therefore requiring the least amount of slope for a level entrance,” Moses said. “Another was this section’s close proximity to the West Lawn washroom, which has an ADA-compliant shower and restroom that was created in 2011. As part of the 2020 project, the grate located in the passageway to the washroom will be reconstructed to meet ADA standards.”

The Academical Village is a UNESCO World Heritage Site. The project team is working carefully to make the rooms accessible while preserving the historic character of the area. 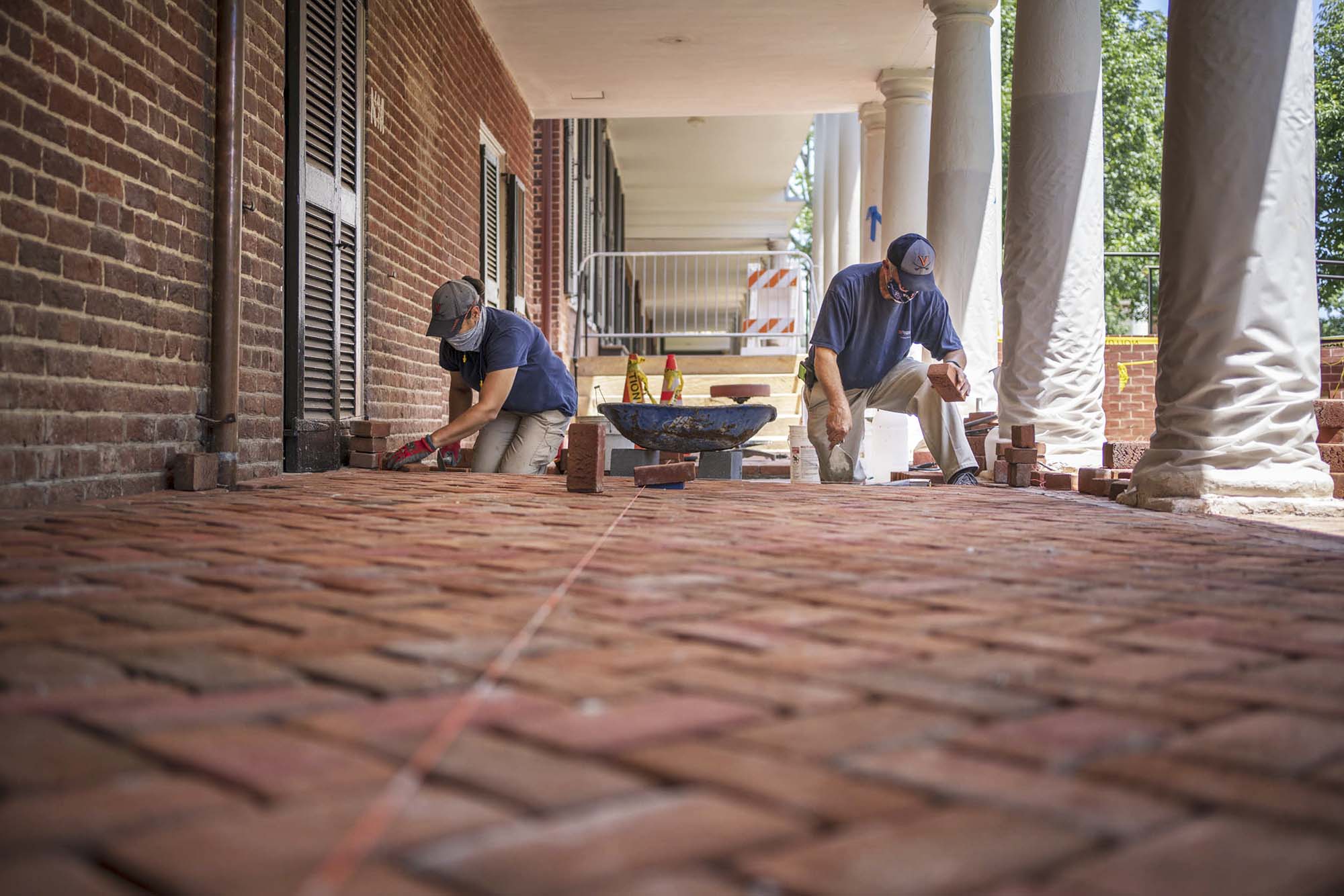 Masons raised the access to a stretch of rooms on the West Lawn that are closest to an ADA-accessible shower and restroom completed in 2011.

“The project team is excited that we have this opportunity to make these rooms barrier-free,” Moses said. “We understand that a student living in one of these rooms may have individual needs and therefore some elements, like the deadbolts and sink cabinet doors, will be modified to suit the resident, and not at project completion.”

“This project has a very light touch,” she said. “With the exception of small areas of plaster removed for the electrical outlet adjustments, historic material has not been significantly affected. When possible, we improved previous interventions, by adding bond breaks at the juncture of historic and new materials.”

The ADA-compliant rooms can also be used by students who do not require accommodations. Lawn room assignments have not yet been finalized for the upcoming academic year.

The push for the alterations came from students. Members of the Student Council’s Buildings and Grounds Committee approached University officials about making some Lawn rooms accessible. 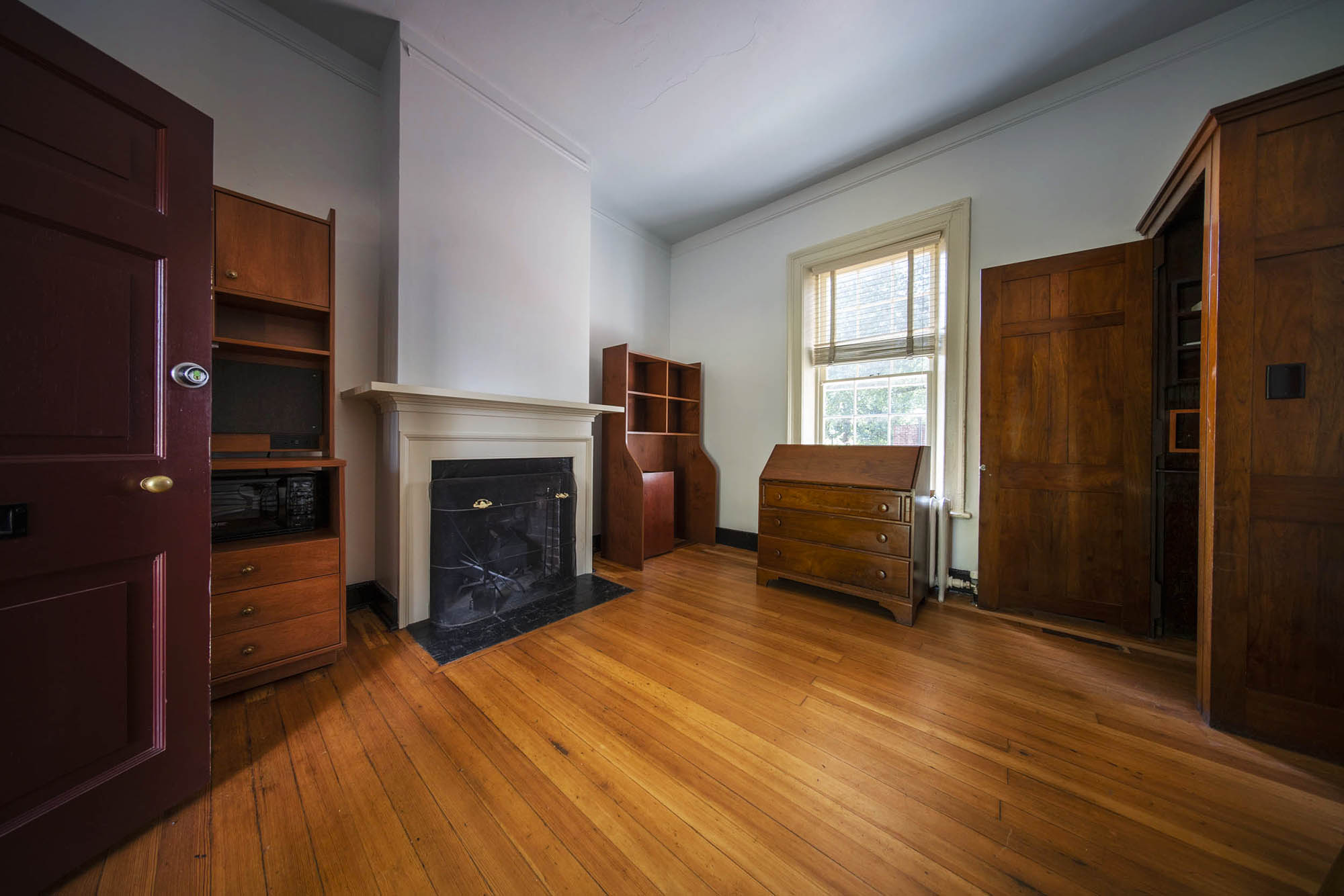 Living in one of the 200-year-old rooms is a high honor for a UVA fourth-year student – an honor that now will be available to students in wheelchairs.

“During my first and second year, I went to about 15 different meetings with stakeholders to try to gather support and initiate the physical adaption of the Lawn rooms,” said Olivia Burke, a youth and social innovation major in the Curry School of Education and Human Development and a former member of the Building and Grounds Committee. “The Lawn room initiative became one of the projects our committee worked on. I led it and my committee members helped me out by attending meetings about changing the Lawn and so forth. So to see the change actually happen was an amazing feeling.”

In March 2019, Burke wrote an editorial in the student-run Cavalier Daily newspaper promoting the idea.

“In general, everyone I talked to was receptive to making the change,” Burke said. “Other students saw this change as important and necessary and most were surprised it had not already been made. Individuals who identified as having a physical disability welcomed the change as well.”

The funds for the renovation work came from businessman Clint Heiden, who donated $100,000 in memory of his sister, Jo Frances Heiden, a 1987 graduate of the McIntire School of Commerce. She was wheelchair-bound after an accident in her second year at UVA left her paralyzed below her shoulders. Clint Heiden is a founder of Internet Ecosystem Innovation Committee, which promotes internet diversity.

The accessibility work is being performed near some other accommodation efforts on the Lawn.

“This work is happening immediately adjacent one of the ramps we’ve installed on the Lawn; this project is part of the larger effort to make the Academical Village more available to everyone,” said Brian E. Hogg, senior historic preservation planner with the Office of the Architect for the University.

How a Single Email Changed a Life END_OF_DOCUMENT_TOKEN_TO_BE_REPLACED

Fall Is in the Air on Grounds END_OF_DOCUMENT_TOKEN_TO_BE_REPLACED

At UVA, There Is a Club for Everyone END_OF_DOCUMENT_TOKEN_TO_BE_REPLACED