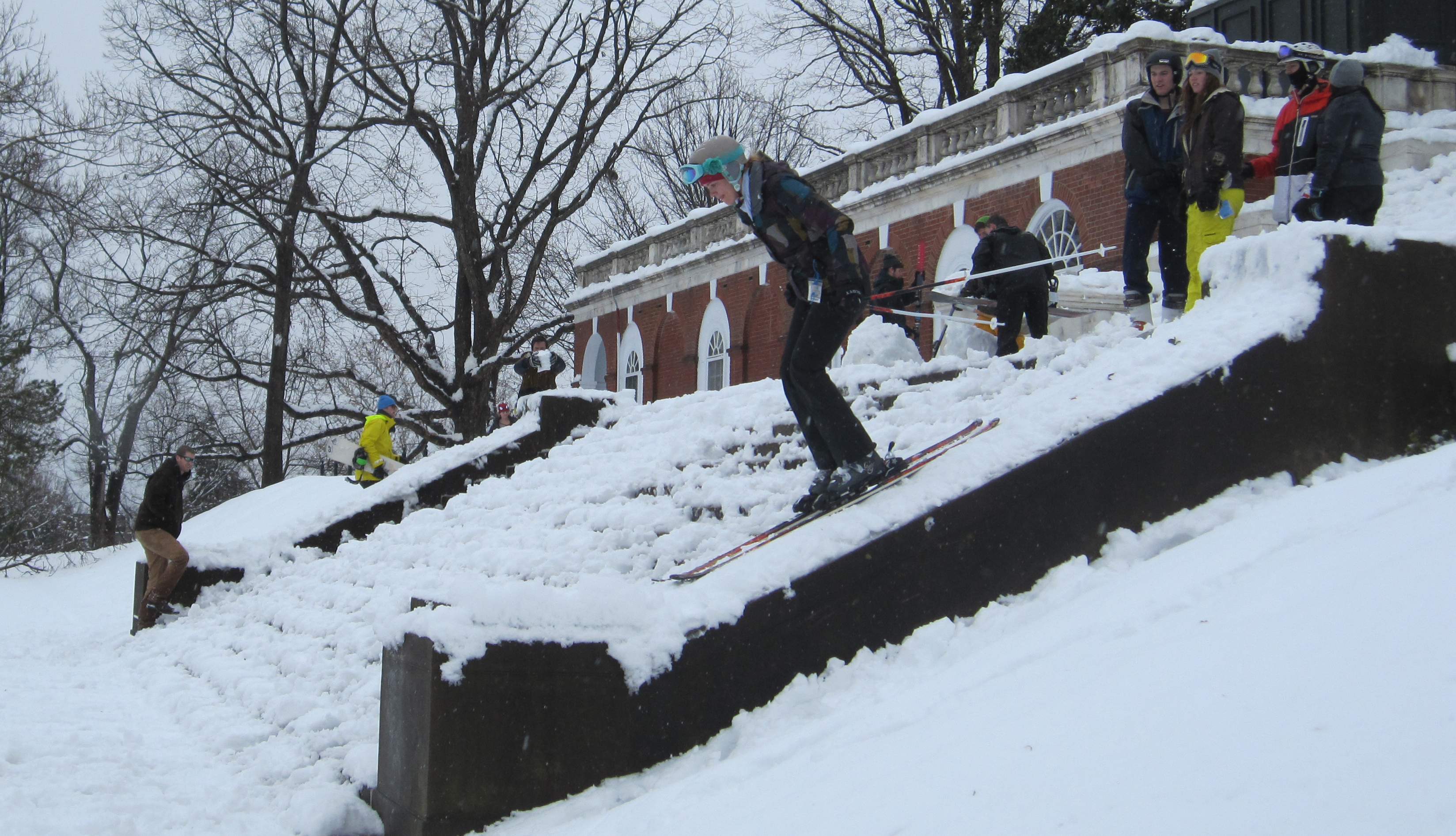 Winter Storm Saturn sped through Central Virginia on Wednesday, dumping enough wet snow – between 9 and 11 inches, depending on where you measured – to cancel classes at the University of Virginia and interrupt power to some facilities across Grounds.

Thursday operations are scheduled to return to normal, though plans could change depending on the weather and availability of power. Health System outpatient clinics and procedural areas are scheduled to open at 10 a.m.

Find the latest information on University and Health System operations at www.virginia.edu or by calling 434-924-SNOW or 434-243-SNOW.

For many students, the weather meant an unexpected extra day of preparation for mid-term exams, many of which were scheduled for Wednesday and this week, or other pursuits.

Students took to the snow, building snowmen and snow forts on the Lawn and around Grounds. As the snow continued to accumulate throughout Wednesday, snowball fights broke out and skiers and snowboarders used the Rotunda steps for practice.

Some put their creativity and engineering skills to the test, constructing massive snow forts and igloos. Most impressive was the snow throne several Lawnies built, barricading a friend’s door, and the giant snowmen dotting the length of the Academical Village.

For many University employees, the storm meant an unplanned day off. Only those employees classified as “designated“ employees were expected to work Wednesday, based on instructions from their supervisors.

University Transit Service began Wednesday with limited routes in service. After transporting primarily workers to the Medical Center, worsening conditions and the decision by U.Va. to cancel classes led UTS to suspend operations for the day. The transit service expected to resume normal operations at 6 a.m. Thursday, but passengers should confirm operating status by checking the UTS site.

Inpatient operations at the Medical Center remained open, but treacherous driving conditions for much of Wednesday led to the closure of the Health System’s outpatient clinics. Hospital operations are expected to return to normal Thursday, other than delayed outpatient clinic and procedural functions. Check www.uvahealth.com for the latest.

Across Grounds and beyond, power outages complicated life. Power companies reported more than 44,000 outages across Central Virginia by mid-afternoon Wednesday. During much of the day, most of the on-Grounds outages were concentrated in the first-year residential area. Lack of power limited menu options at the Runk and Observatory Hill dining halls, while Newcomb Hall was able to provide full service.

“We expect weather conditions to improve soon, but in the meantime please take every precaution to stay safe and to care for one another,” Patricia M. Lampkin, vice president and chief student affairs officer, said in an email to students Wednesday afternoon. Lampkin also delivered a message to update parents.

The University’s Facilities Management crews planned to be out early again Thursday, clearing any remaining areas and applying chemicals to combat icing. Crews also will focus on removing downed trees and limbs, a job that will likely take several days to complete.

Fall Is in the Air on Grounds END_OF_DOCUMENT_TOKEN_TO_BE_REPLACED